Go big or go home – that’s what Samsung Note device owners love about their phone, well, that plus the S Pen.  And today in New York the next generation Note 9 was revealed and Samsung is holding nothing back to entice you to buy.

The device goes on pre-order immediately through retailers, telcos and Samsung themselves with a solid bonus on offer for those who take the plunge before the August 24 availability date. 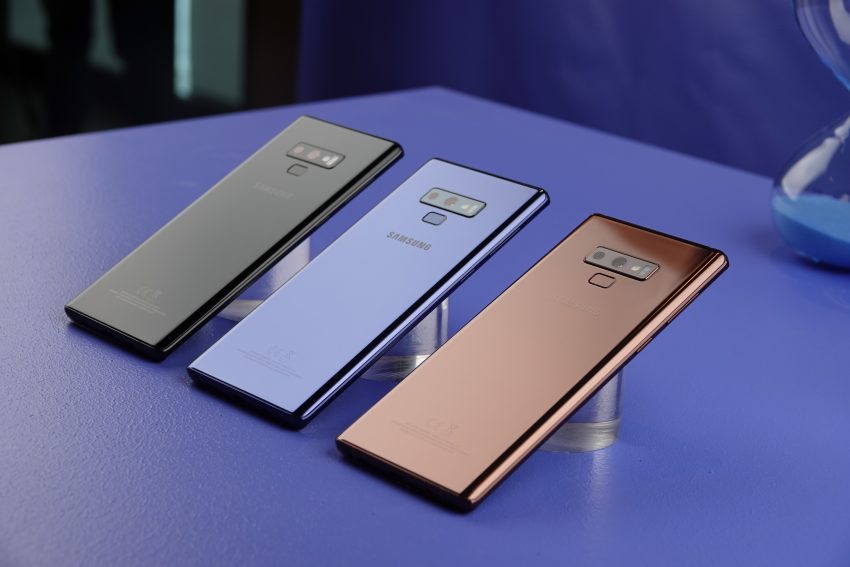 It’s a big deal given our ever increasing demands for storage space with movies and other content on our devices.  That $1,499 price tag is also the same as last year’s device which only had 64GB of storage so again it’s a well priced device.

So why would you want one?

Note 8 users let alone those clinging to Note 5 and 6’s will know they’ve been left behind by the camera that’s been out now for most of the year on the Samsung Galaxy S9.  So, from today, that’s the camera in the Note 9 – no additional megapixels, no dramatic improvements in the basic camera specs. 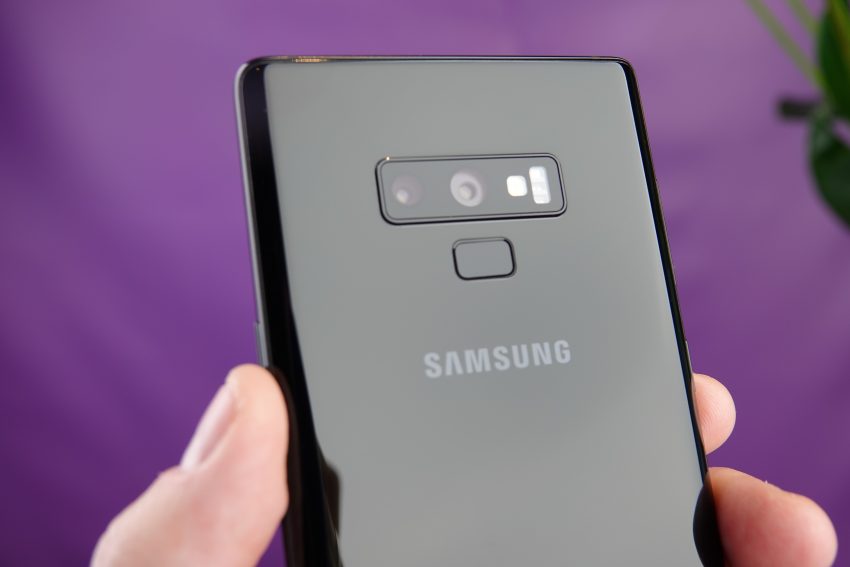 But – it has gotten smarter.  Using Artificial Intelligence, Samsung has brought to the Note 9 a feature we’ve started to see in more and more phones since Huawei introduced it in their Mate 10 – Image Understanding.  Point the camera at a flower and it indicates with an icon that you’re taking a photo of a flower, and adjusts its processing accordingly.  Likewise a whole range of scenes from landscape, to food, animals and portraits.

There is however something even smarter which I’ve not yet seen in another phone – Flaw detection.  Too much backlight? Did someone blink?  Is your camera lens smudged?  After you’ve taken the photo the phone will suggest a correction and to take another photo – now that’s thinking! 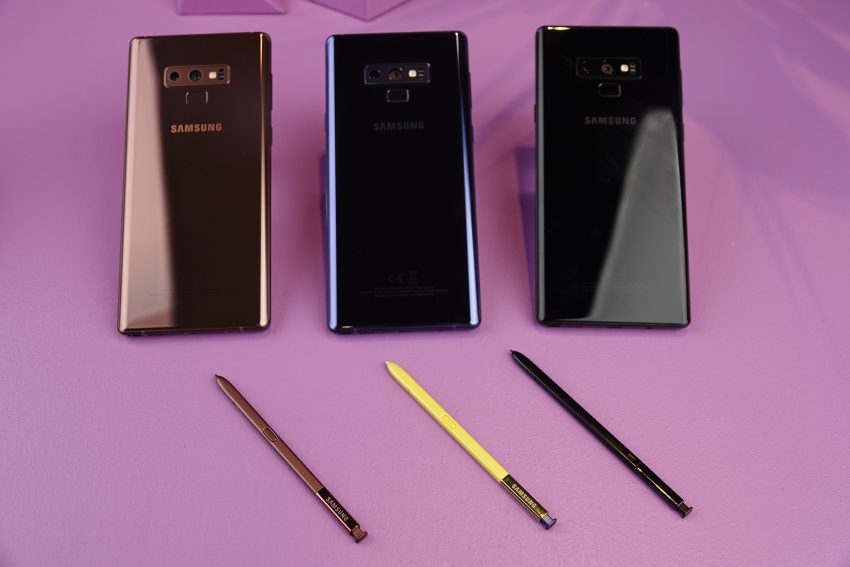 Lens blur will be less of an issue with the Note 9 though, the fingerprint sensor has been moved below the camera as per the S9, so that’s one advantage – oh, and the colour around the lenses and flash matches the colour of the phone – simple, but important overall.

When you’re pumping out a hard core game, you’re probably using every ounce of capacity the device has.  This requires a lot of effort from the phone to keep things under control .  Phones have thermal cooling inside, and in the Note9 Samsung have introduced a Carbon Fibre system of cooling tubes that result in a 2.5 times heat loss compared to the previous silicon system.

Now, this is a delicate issue.  The battery – we all know the history of the Note family right? Back in 2016 the stunning Note 7 featured a 3500mAh battery.  Packed into tight packaging, that led to some issues – and the whole product had to be discontinued.  Last year the Note 8 launched with a 3300mAh battery, so it’s staggering to think we’re packing a 4,000mAh battery into the Samsung Galaxy Note 9.  Yep, 4,000 mAh, the largest battery ever in a Samsung smartphone. 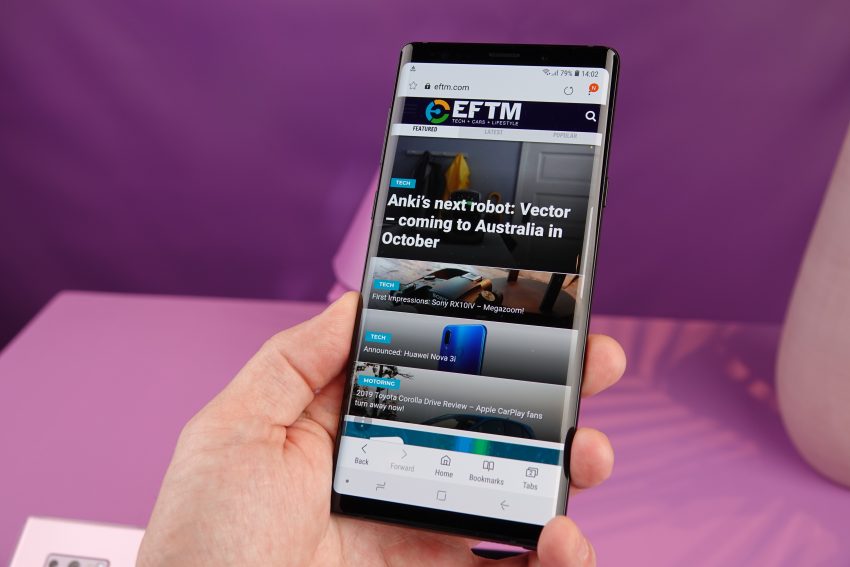 As I mentioned earlier, the Note 9 comes in a 128GB and 512GB capacity, with 6 and 8GB of RAM respectively. 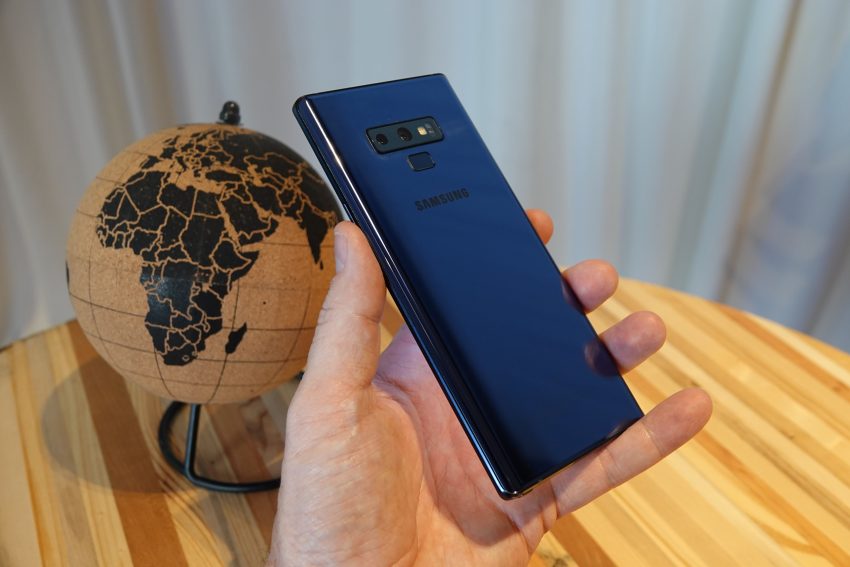 When it comes to Network speeds, The Galaxy Note 9 is capable of up to 1.26Gbps CAT 18 gigabit LTE – that of course is network depending!

How much do Note owners love the S Pen?  A LOT say Samsung, their research shows 64% of Note 8 buyers are loyalists for the S Pen.  No surprise the number 1 reason people buy the Note device is because of the S Pen. 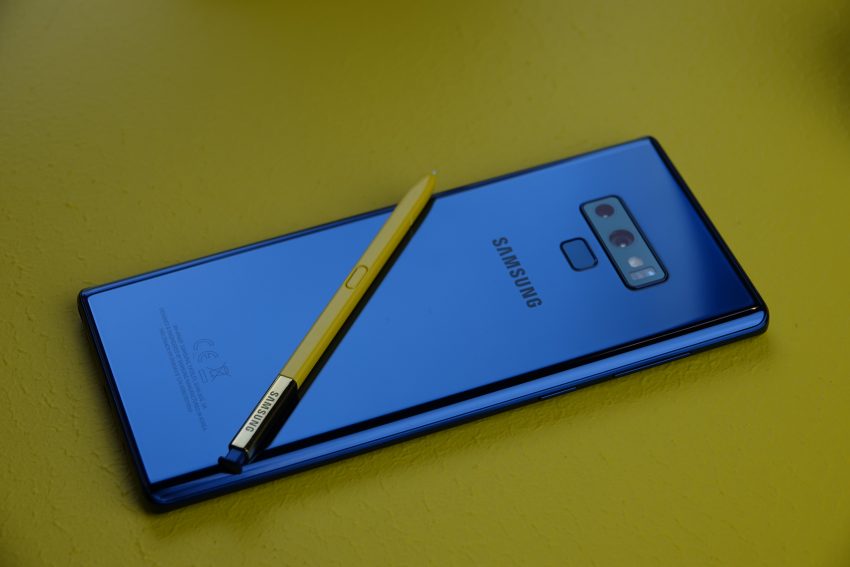 So how can a “stylus” get better?  This one is Bluetooth enabled – so there’s Bluetooth LE on board, that’s a new way for your phone and the pen to talk to the phone.  Why?  New features.  The S Pen is now a camera clicker, and presentation clicker.  You could do a whole presentation from your phone, and be anywhere in the room using the S Pen to click forward and back through slides.  Need to take a selfie?  Use the S Pen to launch the camera, and take the photo. 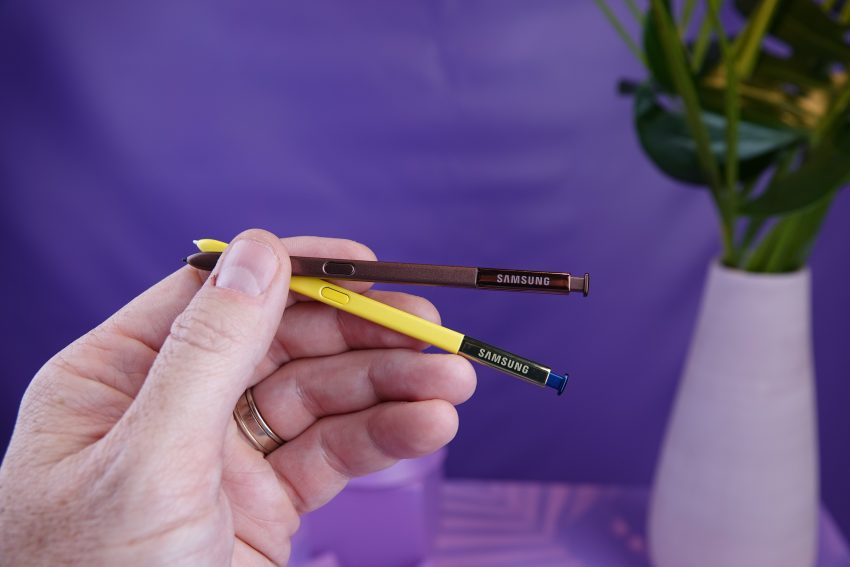 Simple stuff, but developers will get S Pen access so we’ll see how apps evolved to use it.

Fingerprint sensor has moved on the back, and the edges are now diamond cut – so Samsung say it “looks” thinner despite being a touch thicker. 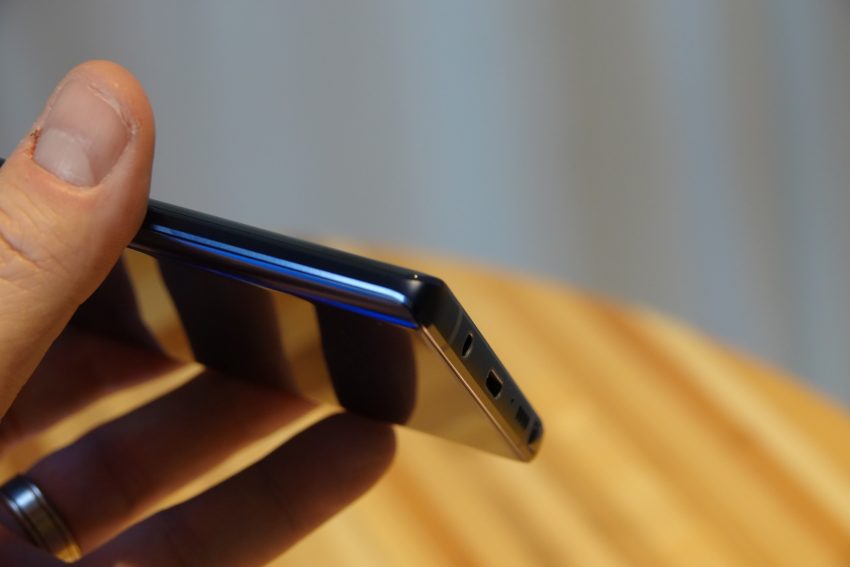 Worldwide there are four colours, Midnight Black, Metallic Copper, Ocean Blue and Lavender Purple.  The Purple won’t be coming to Australia.  Black and Blue will be available through the Telcos and retailers, the Copper will be sold by Samsung and retailers but not the telcos. 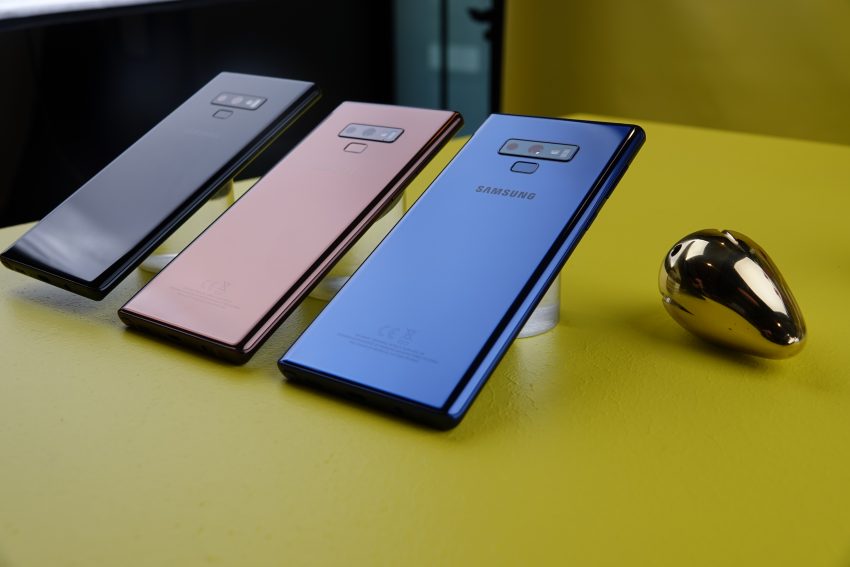 This is a computer too?

Samsung’s DEX when launched was a small device you can dock your Note 8 Smartphone in and turn it into a computer.  A desktop version of Android you can control with a keyboard and mouse. 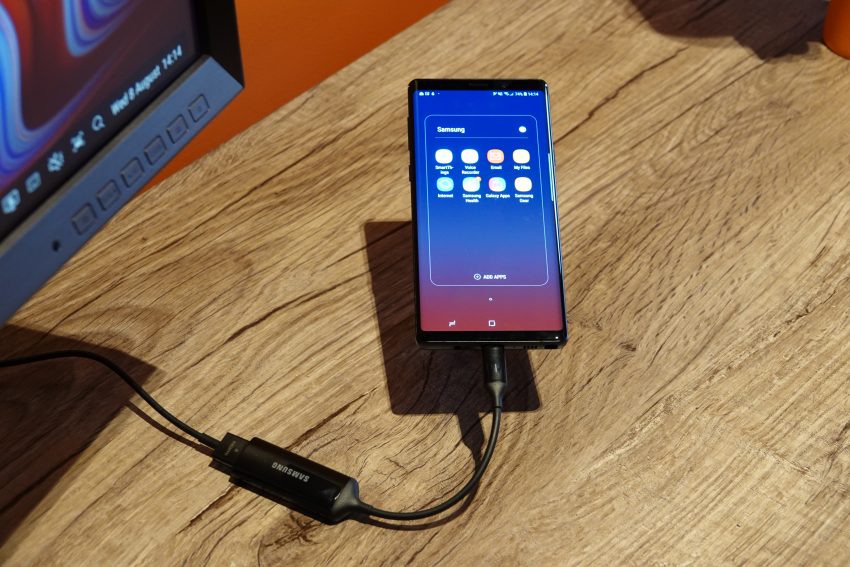 This year – it’s next level.  No dock required.  Just plug in a USB-C to HDMI adaptor, cable to your monitor and you’re good to go.  If you have a Bluetooth keyboard connected to your phone that will work, your phone also works as a touchpad.  It’s crazy.  This thing is a computer – legit. 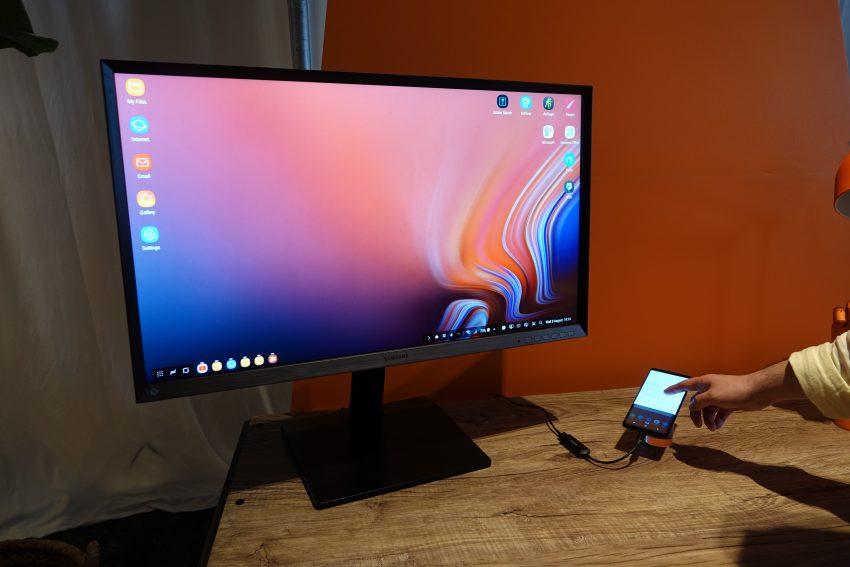 When and How much? 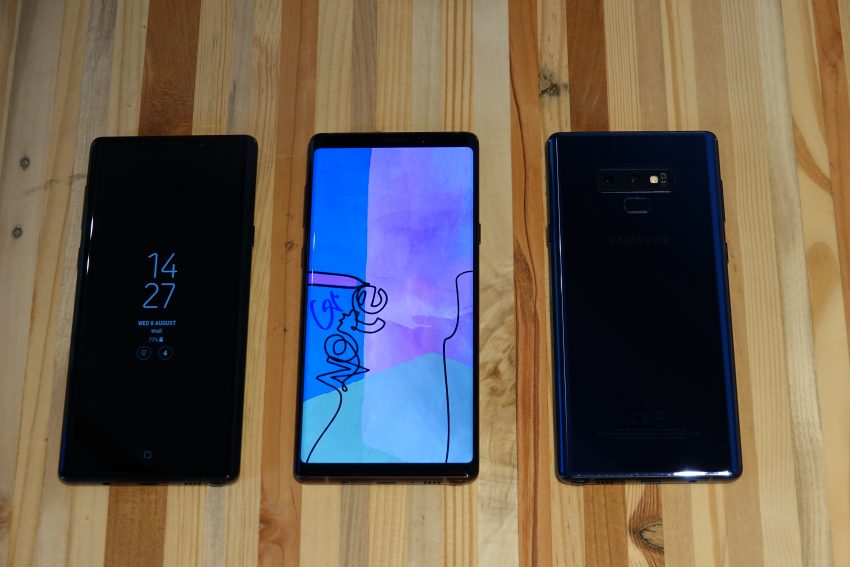 Garry McGregor, Vice President, Mobile Division, Samsung Electronics Australia, said: “The Galaxy Note9 sets a new benchmark for what Australians should expect from a premium smartphone. It is built on years of innovation, refinement, and listening to our customers to deliver the features they need so they can achieve more in their day.

“Our Galaxy Note customers are among our most loyal and enthusiastic supporters. Each year this smartphone showcases our latest innovations, which is why Note fans continue to stay dedicated to this device.

“Mobile technology powers our lives and today’s power user needs a device that can keep up with their demands, including a long-lasting battery to get you through the day, ample storage and of course speed. The Galaxy Note9 delivers all this and more. We know Australians are going to love this device and we’re excited to support it with a great pre-sale offer.”

Trevor Long travelled to New York city for the Note 9 launch as a guest of Samsung Australia.