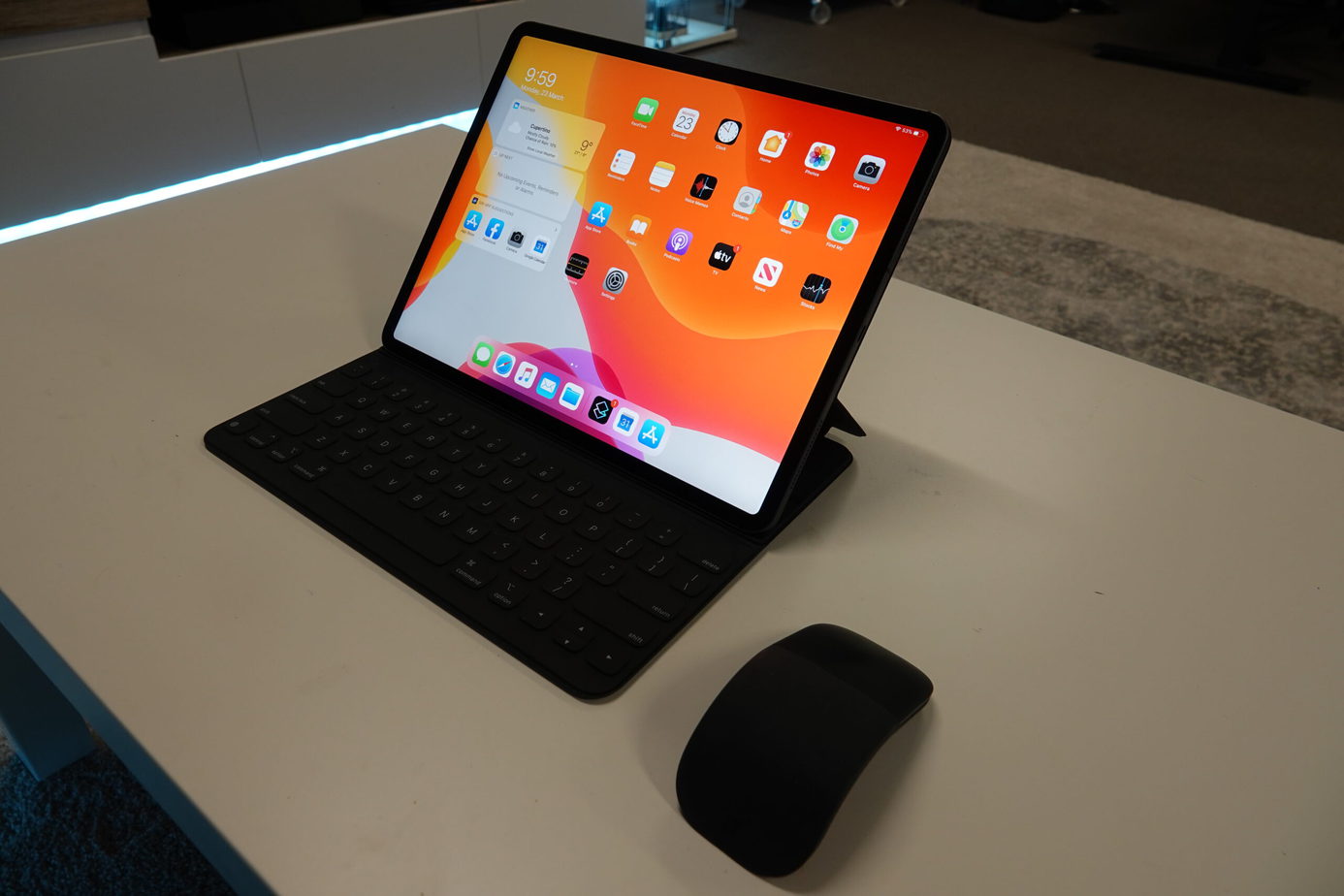 The standout feature of the New iPad Pro might appear to be the stunning new Magic Keyboard which elevates the iPad in the air above the keyboard while the keyboard itself is full-size and comes with a trackpad and backlight lighting. But that’s not available until May.

So if you buy the new iPad today, what’s good about it?

Yep, the display is stunning, the processor is amazing, Camera System is top notch smartphone style, there’s the LiDAR scanner, but it’s the update to iPadOS that makes it really great.

And the good news is that works on existing iPads too – the key feature I can’t stop loving – Mouse Support.

iPadOS 13 initiated a level of support for the mouse but buried deep in the accessibility settings and very rudimentary.

What makes it great is that it works with any Bluetooth mouse, and that it’s not just “mouse support”.

There is no pointer. In regular screens, the “mouse” is a little tiny circle you move around the screen. When you move to an action item like a clickable word, the word highlights and the little circle disappears.

In a text document, the cursor is the text line cursor and it all works seemlessly.

We’re so used to reaching for the mouse to navigate. Strangely, the only comparison I can give you is what it’s like to use a Laptop without a touchscreen (like the MacBook Air) after being so used to a touch-screen. My kids do it all the time.

With that said, you can get the mouse working on lots of existing iPads with iPadOS 13.4 which will be available this week.

This thing is powerful beyond belief. More capable than almost any standard laptop you can get out there.

Around the back are serious cameras. A 12MP wide camera and 10MP Ultra Wide with 4K video capabilities. This is iPhone 11 photography, on an iPad.

But I’m still not a fan of using an iPad for photography. That said, if you need it, it will work for you.

Inside the camera array – which looks just like the iPhone 11 Pro array, is an additional circle – this one contains a LiDAR scanner.

LiDAR is the kind of thing we see on Autonomous Cars to give the car the eye’s to see the world around it.

On an iPad this has been added to enhance Augmented Reality.

If you’ve done any AR on your current devices there’s one thing you’ll know – it takes a few seconds to get going. You swipe your phone all around the room for it to establish the “floor”, instead, the LiDAR sensor allows the device to instantly “see” the room around it.

Rather than just a flat image, the LiDAR sensor gives the iPad a clear depth map of the room.

It allows for instant AR usability. Given the device is so new, and App developers haven’t made new apps to really show it off – we won’t really get this technology leap for a little while.

This device is epic, way more powerful than I will ever need, but that also goes to how long this device will last, which is a big positive.

Frankly, I really want to try that new keyboard. The mouse has made me want to use this more and more, but the keyboard could be a deal-breaker – that Keyboard could just be the ultimate laptop killer for the iPad stable.

I love the design (I hope iPhone returns to the squared edges too!), The screen is glorious, and with Mouse support – the iPad Pro is the pick of all professional tablets and two-in-ones.