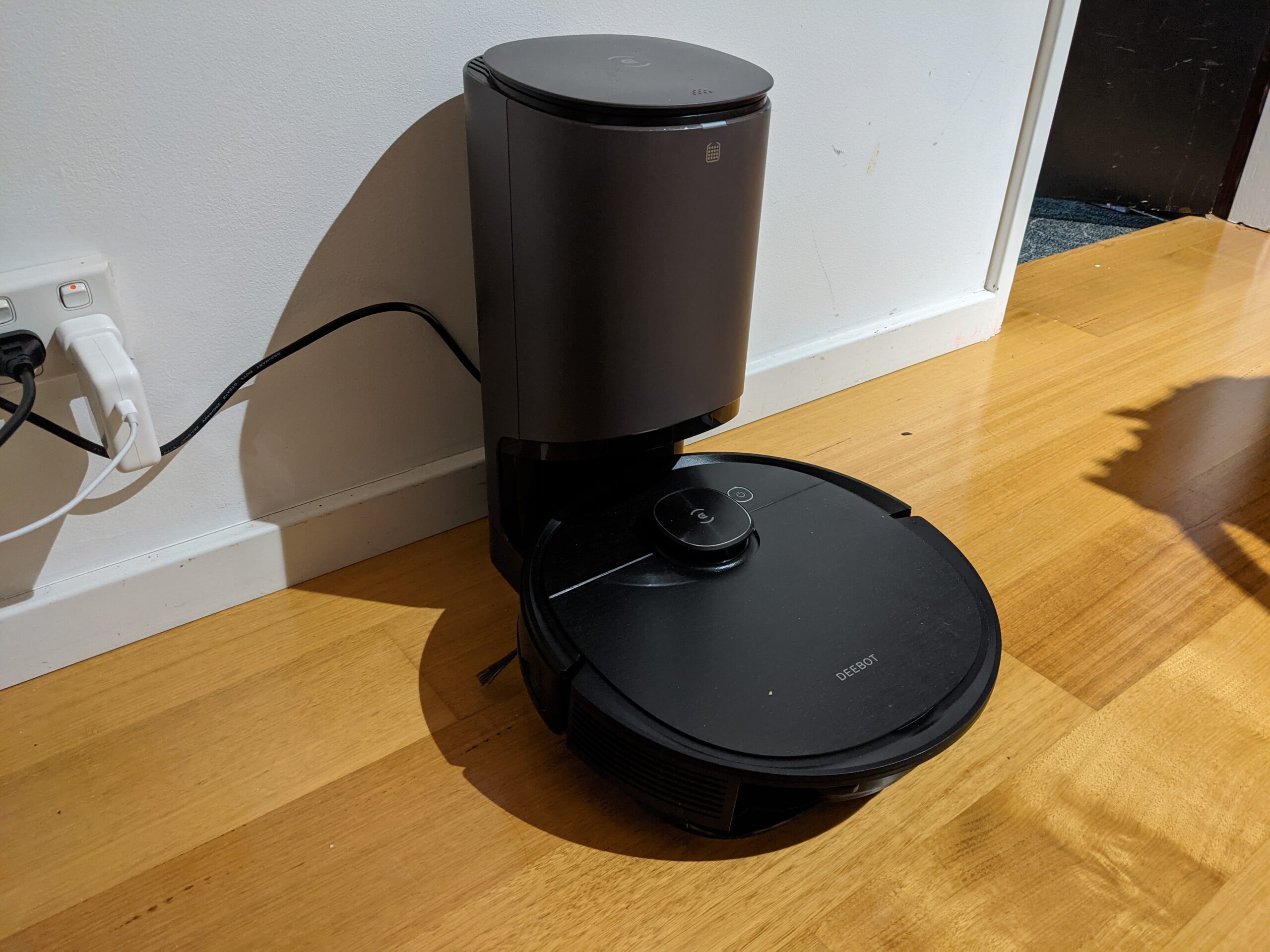 Regular readers of EFTM will be well aware that we’ve tried and tested a range of Robot Vacuums over the years, and our favourites are Ecovacs for their advanced mapping among other things. Today, the company celebrates three years in Australia with the launch of the new Ecovacs Auto-Empty Station for the DEEBOT OZMO T8.

This is not the first product I’ve seen that is a bridge between the vacuum and the actual bin, Samsung’s Stick Vacuum has an optional “Clean Station” which sucks the debris from your Vacuum bin into a bag for emptying later.

My issue with that is its use applies only in apartments, where you can’t just walk out to the red bin to empty your vacuum. However, for a Robot Vacuum the situation is very very different, thus the power of the Ecovacs Auto-Empty station.

Given the small dust bin of a robot vacuum, it needs to be emptied out after every one or two cleans in my experience.

Add the Ecovacs Auto-Empty station and your Deebot Ozmo T8 (Larry in our case) will return to the Auto Empty station as it’s base, with the auto empty station then using powerful suction to remove the debris from the Robot without you lifting a finger, or even being home.

The station itself is quite a big unit – compared the the standard charging station – and the Deebot Ozmo T8 sits quite high up on it, a centimetre or so off the ground. This means the Deebot needs to navigate itself up a little ramp to dock in place. It’s an arduous process, which when you watch it happen is like watching grass grow, seemingly taking forever.

But in the scheme of things most times you probably won’t be home so who cares how long it takes.

Once docked, it starts charging, then WHOOSH! out goes the debris. Here’s that whole process in action – a minute and a half – painful to watch, but trust me, it’s amazing.

How Does the Ecovacs Auto-Empty Station work?

This is the genius. In the Auto-Empty station is a new dust bin for your Deebot Ozmo T8.

There’s also a little tool you use to remove two plugs in the bottom of the T8 that create holes for the debris to come out.

Once up the ramp and parked, the T8’s new Dust-Bin is opened with two small flaps by the sheer suction of the Auto-Empty station.

Two pipes run under the unit to suck out the debris and up into the smallish vacuum bag inside the Ecovacs Auto-Empty station.

How well does it work?

I’ve had two occasions when checking after it’s empty and found debris still in the Deebot. On one occasion there was a large bit of debris inside that I think blocked the suction, on the other a large clump of dust and hair that was really just stuck inside. The suction of the Ecovacs Auto-Emtpy station is so strong I’ve no doubt this would have cleared after a couple of goes.

You are able to force an empty of the Deebot within the app, and of course the app will alert you if you need to clear the dust bin for any reason.

It may seem like the ultimate in laziness, but it’s really just a logical step for someone who has their Robot in use every day.

If you already have the Deebot Ozmo T8 AIVI you can buy the Ecovacs Auto Empty station for $399.

There’s also a new Deebot Ozmo T8 without AIVI that comes bundled with the Auto-Empty station for $1,299.

That’s the same price as the Deebot Ozmo T8 AIVI and here’s the difference, the T8 will avoid obstacles but not tell you what they are, nor does it have the video manager.

Frankly, two features that are impressive, but that you won’t miss.