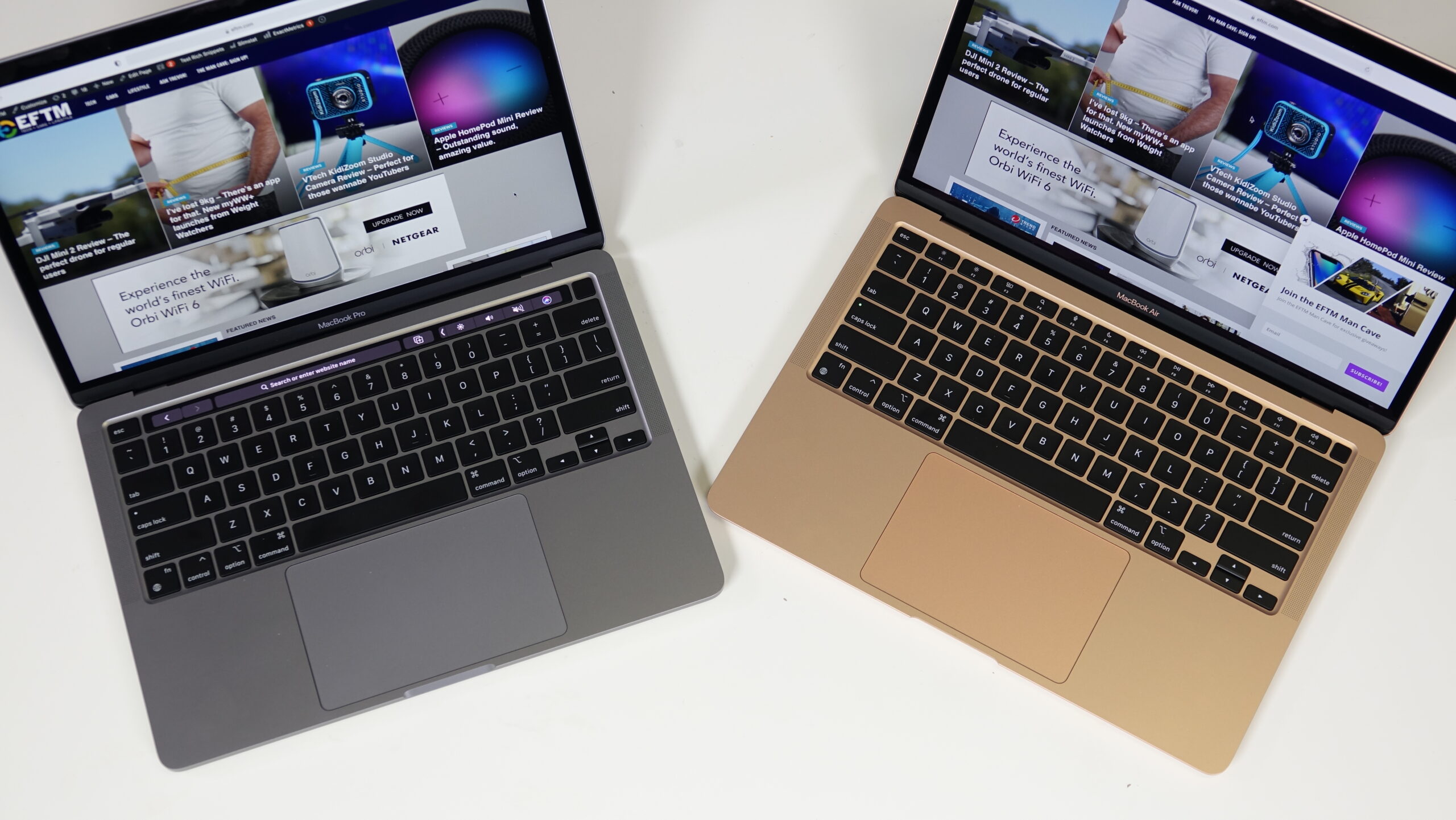 Apple used to refer to things as magical, heck their fancy iPad keyboard has the name “Magic Keyboard”. But that was all just marketing. Their new Apple Silicon M1 chip is pure magic, there has to be some sorcery involved in how it works because the new MacBook Air and MacBook Pro are something to behold.

Not when it comes to looks mind you, they look the same, identical even to the previous generations. But just think for a moment about all the wild claims Apple like to make during product announcements. 5x faster this 2.5x faster that, better than x% of the competition.

Hard to fact check, but they make those claims knowing we’ll put them to the test.

I’d consider my Laptop needs above average, but not at the peak of performance needs. I use the device a lot, It’s on more than it is off in a given day, and I like to be able to churn out a video edit not worrying about what device I’m using.

A MacBook Air has oft been my favourite, but lack of power makes those video edits a slower process than you’d like, so like most people I’ve gravitated to the MacBook Pro.

For that reason, we chose the MacBook Pro for my son’s new computer, hoping it would get him from Year 8 today through to Year 12.

Bought that four months ago and now, well, boy is that thing looking like a Ford Laser in a sea of Ford Mustangs. But, enough about my woes.

My first choice of testing is always a quick Geekbench test. Comprehensive, and runs across all devices.

Now keeping in mind, these two machines run the exact same processor – the Apple M1. That’s like having two devices with an Intel Core i5 – well, just in that they are the same, not by way of performance that is.

So on the MacBook Air my Geekbench single core test showed 1719. The MacBook pro came in at 1685. These things fluctuate, so lets call that 1700.

Nice, I thought. Then I checked the benchmarks on the Geekbench results. Holy Shit. The previous MacBook Pro with an i5 Processor scores 1147 and 4239. Bloody hell, this is something insane. On some comparisons these are better than Macs with an Intel Core i9.

But lets be honest, these are tests made to look at the compute power directly, perhaps they bias a nice chip layout.

Miles ahead, each and every time.

Seriously, it’s insane. Now I might be missing something, but Apple’s unification of CPU, GPU and Memory has led to some stunning leaps forward in compute power. It’s like they went back to the drawing board of Chip design and started all over.

When paired with Apple’s latest MacOS Big Sur, it’s snappy. The instant on function means opening the laptop puts you back where you were. Tick.

Battery life claims are some of the biggest attention grabbers outside of the nerdy Silicon discussion. And both the MacBook Pro and the MacBook Air stack up very well. In my week of limited testing I didn’t charge the Air at all, yet it’s still going after irregular use, while the Pro has shown solid day long usage.

While I doubt the devices will each truly last the 18 or 20 hours claimed, as that’s under some strategic conditions and usage, I have zero doubt about them making it through a school day, let alone a dawn to dusk work day with power in hand.

That Battery Life is probably the number 1 selling point of both these devices without question.

Which to choose? MacBook Air or MacBook pro?

Ahh, The question I know people will wonder. Both these have the same chip – Apple’s M1. Both can be configured with the same storage (256 or 512GB SSD).

Frankly, I think Apple’s use of the same M1 chip in both devices cripples the Pro’s appeal.

MacBook Air lacks cooling, there’s no fan noise because there is no fan. MacBook Pro has cooling, so will be able to push longer at peak processing power. In my limited testing, the Intel based MacBook started churning out Fan noise super early, while the new MacBook Pro never switched it on.

For this reason, I can see the Pro really is for the most intense users.

And for this reason, I can’t imagine too many people needing the Pro over the Air.

What next for Apple Silicon?

Who could ever know. But here’s what I reckon happens.

The Apple Silicon M2 Chip, or perhaps the M1X is launched. It’s an 8 or 16 core chip, much more powerful again, and is the baseline for the 16 inch MacBook, the power of the next iMac, and is an option on the 13 inch MacBook.

Another crazy powerful Chip comes later, let’s call it the M1Z – It’s there for the iMac Pro and Mac Pro.

For now, drop everything and get the MacBook Air – or the Pro if it fits your budget.