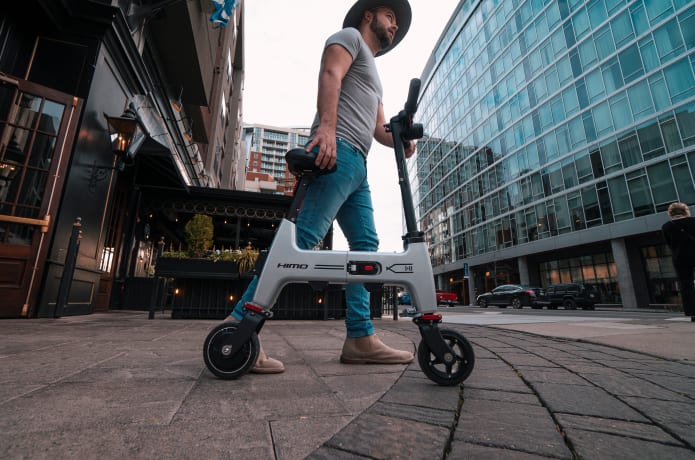 You’re going to struggle to explain to passers by just what this is as you zip past them, but it’s part bike, part scooter and all things Mobility! The Himo H1 is a fold away bike that has the power and wheels of a scooter and it’s available now.

At $1149 it’s somewhat pricey mobility, but it’s also super useful in many ways.

It’s got all the goods of a Ninebot/Segway scooter, coming from the same Xiaomi heritage, so the 7,500mAh battery will get you going up to 18 km/h and will go up to 30km before you’re searching for a charge.

George Saad, COO of Panmi the Aussie distributor of Xiaomi products says “The Xiaomi Himo H1 is a fun toy that is beautifully engineered. You can fold it and take it anywhere with you, it is that simple. I believe the H1’s presence is only set to rise in Australia”

This little scooter bike folds away to almost nothing, and weighs just 13kg so you could walk onto a train carrying it.

When it needs a charge, the 1.8kg battery is easily removed and charged in your home or office.

While there isn’t suspension on the frame, the 7 inch tyres offer some level of shock absorbance for your ride.

There’s an LED display which shows your speed and status, as well as headlight settings.