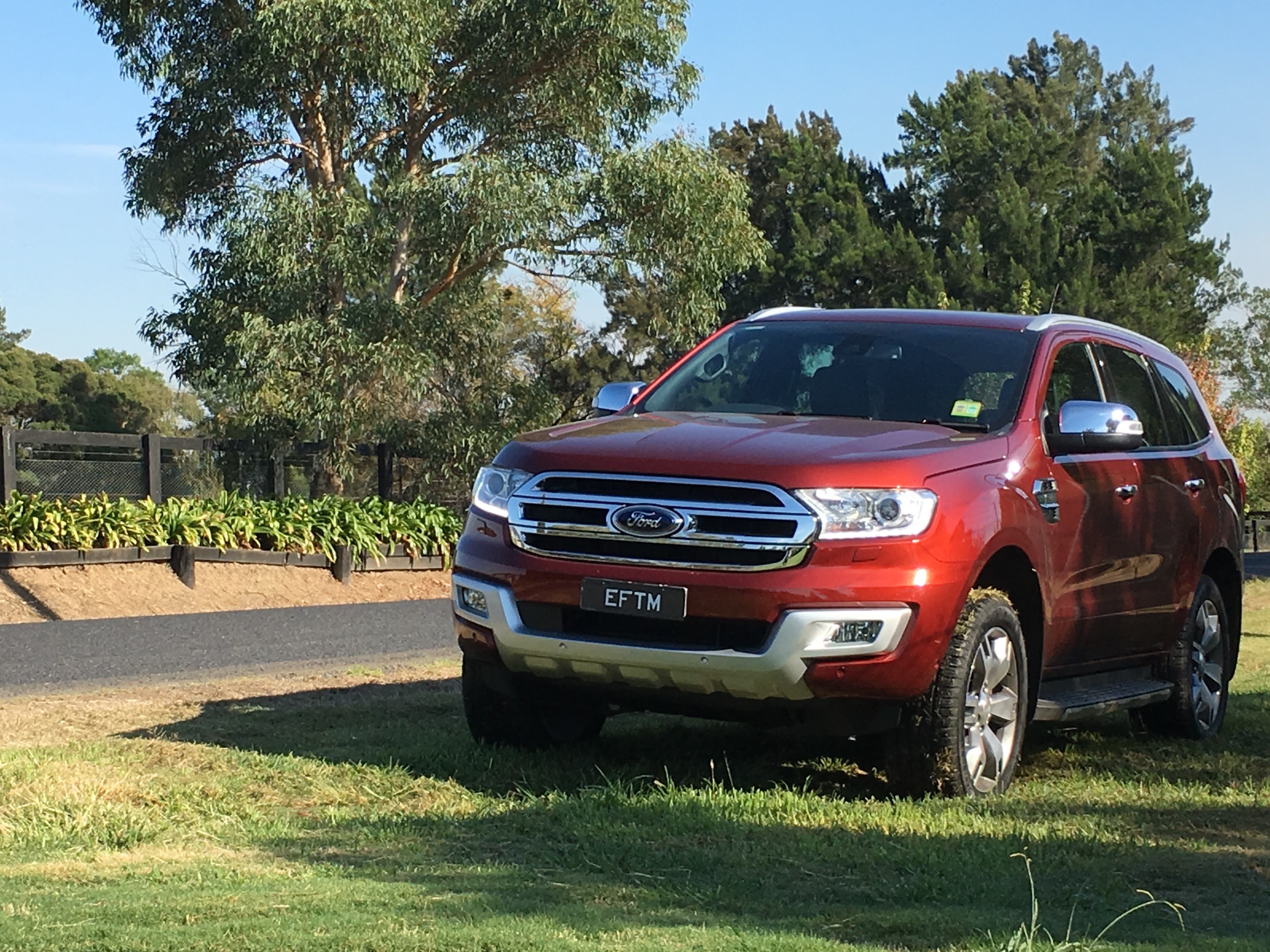 A ute with a roof and a couple extra seats if you’re lucky. It’s an easy way to simplify what vehicles such as the 2016 Ford Everest are at the very core. But in this instance Ford has managed to turn what was already the best driving, but still rugged Ranger ute into a sophisticated family friendly wagon that can still go the distance when the bitumen turns to dirt.

The Everest is no doubt a large, rugged looking piece of equipment. In fact it screams Uncle Sam, especially the front end with plenty of chrome work, chiselled bonnet and other bright panels covering the lower bumper. The rear end cohesively works well with the rest of the design, which really helps the Everest standout from some other creations such as Holden’s Colorado 7 and the Mitsubishi Pajero Sport. It truly looks like a clean-sheet design SUV Wagon.

However the Everest isn’t the most dynamic SUV around when it comes to handling but you’d expect that given its origins. But on the other hand it doesn’t drive like a Ranger either. Coil suspension in the rear end and a different tune when it comes to acceleration separates the 7-seater from the dual-cab very well. Steering is exceptionally light and it easily soaks up most surfaces comfortably. It does lean through corners a tad too much for my liking, but carving up a twisty back road isn’t what the Everest is about I guess.

From a standing start the 3.2-litre inline five-cylinder is far from brisk, there’s an initial surge of torque early on but the different tune has somewhat tamed the more significant up front lurch the Ranger setup is capable of.

In top grade Titanium mode the interior scores an advanced digital twin screen instrument cluster and cushy leather seats all round. But at this price point it’s a tad unnerving that the same hard plastics and the built-to-a-purpose feel of the Ranger still exists. A coating of hard-looking leather across the dash serves only as a consolation prize.

A 3.2-lite 5-cylinder turbo-diesel engine pumps out 143kW/470 Nm through a 6-speed automatic. Constant AWD is on hand as are numerous off road modes. Grass, gravel, snow and sand settings all fall under the Terrain Management System (TMS) and goes beyond what is found in the Ranger. While my time was spent exclusively on the road it goes to show that Ford really believes the Everest can stand up to its aspirational name. 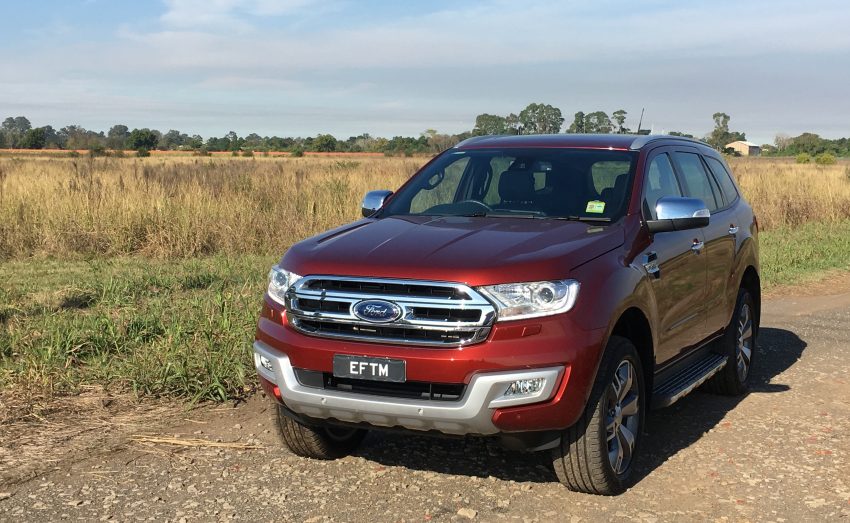 The cabin is roomy enough, 2nd row occupants are well accommodated with their own temperature controls and overhead air vents. In fact even the kid sized third row scores some more vents. 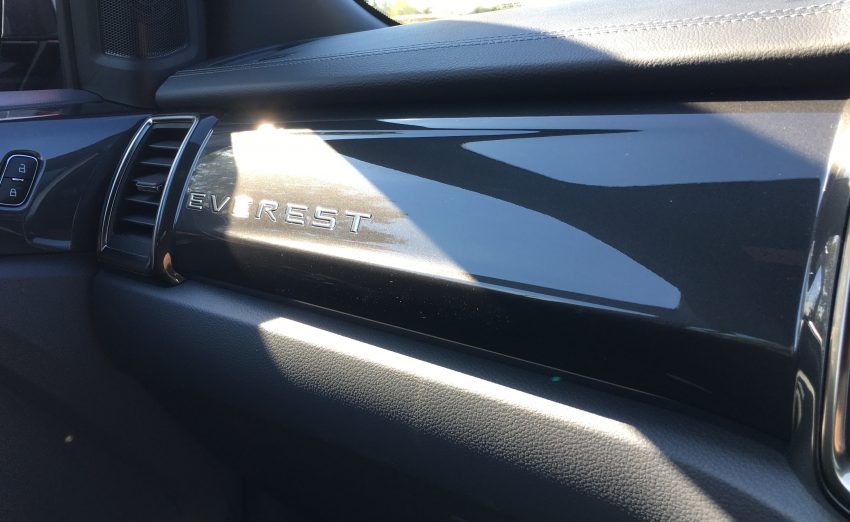 For those who need to tow the Everest has 3,000kg braked towing capacity.

The familiar SYNC2 infotainment system is showcased via an 8-inch colour touch screen monitor and allows for the usual integration of smartphones. I’ve never been the biggest fan of SYNC in general but I will admit it’s a straight forward system to use and does feature an excellent voice recognition system. 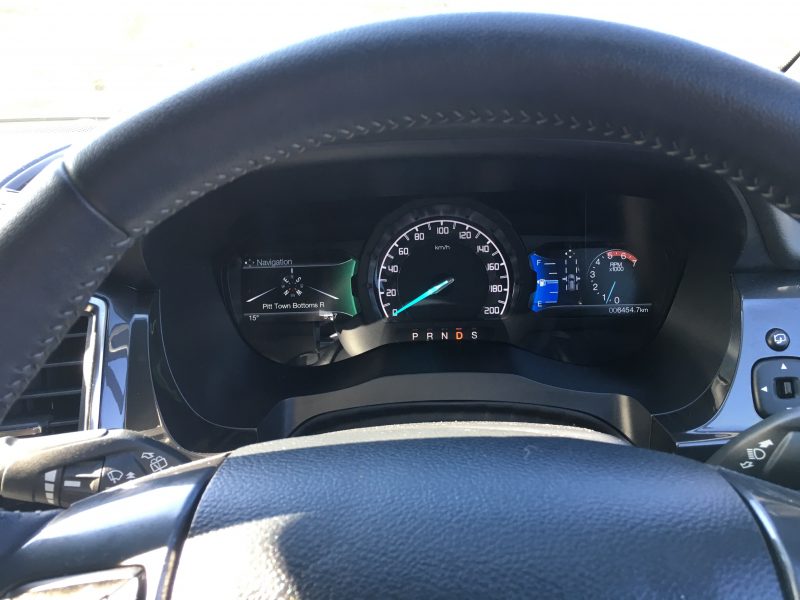 Most of the tech goodies centre on safety and various driver aids. If you can’t park, Active Park assist will do it for you, blind spot monitoring and cross-traffic alert provide a second pair of eyes, a lane keeping system nudges you back on track should you start to stray off course plus adaptive cruise control takes the hassle out of adjusting speed manually when things slow down on the highway.

Fuel consumption is rated at 8.5L/100km which is tidy and in fact I undercut that on a couple of trips, but after a week the readout settled on 9.2L/100km. You can jump into the Ford Everest Ambiente from $54,990. But it’s a sizeable jump to the as-tested Titanium which starts from $76,990. Ford does offer a lifetime capped-price servicing arrangement with 15,000km intervals. 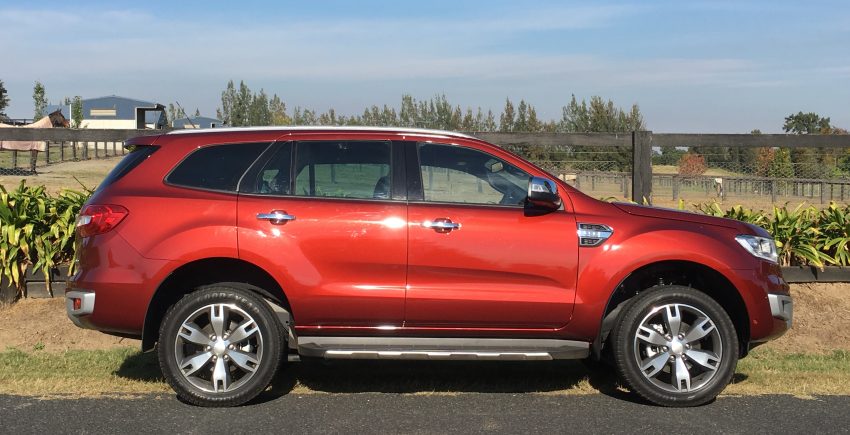 When it comes to the lifestyle ute market I’ve always sung the praises of the Ford Ranger. So you’d automatically assume I’d fall for the Everest given its similar architecture. But for me spending this amount of cash should bring with it a little more luxury and refinement. 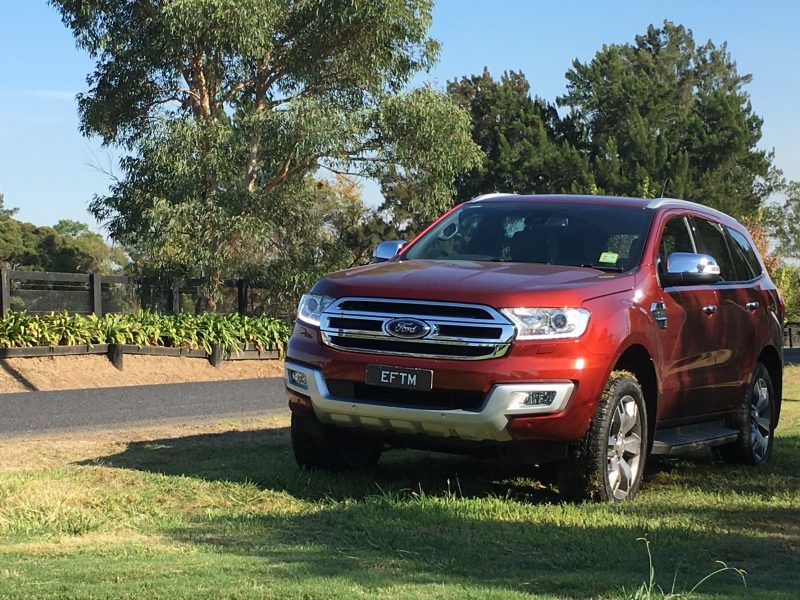 While superior to others in this segment it’s also vastly more expensive, in some cases upwards of $20,000 more. I just wonder that if you’re really looking for a family orinated SUV that still has oodles of off road ability would a tried, tested and proven Toyota Prado be a better bet? In any case the Everest is still the best ute / SUV wagon conversion around. As a result I award the Ford Everest Titanium the EFTM Credit Rubber Stamp of Approval.