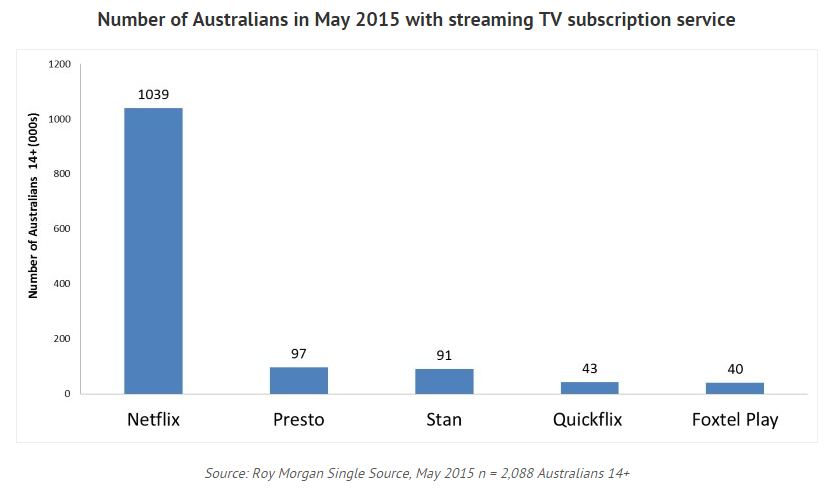 Netflix has won the streaming war.  They’ve got 1 million subscribers, over 400,000 households in Australia, ten times Stan and Presto.  That’s the word on the street from Roy Morgan Research.  Problem is, someone forgot to let Grant Denyer read out the results with the all important caveat “the survey says”.  So, just how is the Aussie streaming market looking?

Let me be clear, Netflix is the biggest player in the Australian subscription video market today.  They’ve got more subscribers than the others probably put together.

But equally, Roy Morgan are cracking jokes to suggest that “Officially” there are 1,039,000 Australians subscribed to Netflix.  Cracking Jokes. A survey of 2,000 people allows Roy Morgan to make some assumptions, and statistically very valid assumptions.  But I think calling them “official” numbers is a huge stretch.

There’s a bunch of reasons why we should take this survey as a clear indication of where the market is going, but also be sure to drill into the data to ask as many questions as we are making assumptions.

For example.  According to Mumbrella, the actual question asked was “Does your household have any of these subscription or pay-TV services?”.  The advantage Netflix has is huge brand awareness.  In many homes people would absolutely know and understand that they have Netflix.  But ask someone who is not the primary account holder if you’ve got Presto or Stan – there’s actually a chance they don’t know.  In fact, there’s even a chance they will say Netflix just because they know they can watch TV shows and Movies on their smartphone or Apple TV – confusing the services.

Then there’s the extrapolation of Households to Subscribers based on the answers to the questions and the number of people in the home.

The household numbers are actually a very good representation statistically of the actual penetration numbers of these three (focusing on Netflix, Stan and Presto) services.  In terms of proportionate ratio, I think it’s absolutely possible that Netflix has two or three times the number of subscribers than Stan or Presto, but it’s fanciful to think it’s ten-fold based only on a survey of 2,088 people.

When you consider that there were “reports” of 200,000 Netflix users prior to their Australian launch, using the Roy Morgan data, they’ve only added around 200,000 extra accounts – that’s not as big as adding 400,000 from launch.

Adding fuel to the fire, there’s a lot of different lingo in the SVOD space – Users, Subscribers, Accounts, Active Accounts, Paid Subscribers, then there are Households, User accounts and the churn rate.

The Roy Morgan survey does nothing to address the potential that people had a Netflix, Stan or Presto account and stopped paying for it.

Additionally, and most worryingly, the 1 million figure sets a high benchmark that doesn’t delve into the possibility that many of those households simply have a single Netflix account, pay the higher monthly cost and have multiple simultaneous user accounts access it.

This survey, and the reporting of it generally does nothing more than feeding the beast that is Netflix as a brand, a brand that represents a whole market segment.

Some may say that Stan or Presto are losing the battle, but none of us have seen the business models on which those businesses operate.  100,000 subscribers might be spot on what both were planning to have right now?  Likewise either or both may have in fact always planned their business on the basis that Netflix would have a subscriber base and or market penetration 4 to 5 times higher than they do.

In point of fact, Netflix success is good for the whole Streaming – SVOD industry.  As one new user discovers Netflix, their world is opened to a possibility of streaming so their likelihood of signing up or trying one of the other services is actually increased.

And the real reason there doesn’t have to be one winner?  It’s cheap to subscribe, and we’re used to looking around for content.  To watch Seinfeld we had to watch Channel Ten (save for those first few months of “bad ratings” on 9 – but lets not remind them of that) – Border Security is on Channel Seven, we’re used to going to a destination to find certain content, and as this market settles, the same will apply to streaming.

Right now, no-one, not even those closest to the numbers would argue that Netflix doesn’t have the highest subscriber rates in Australia.  I find it hard to believe that Stan is not the clear second place, mainly due to the quality of the offering from Presto (no HD) and their slow to marketing approach.

Subscription streaming is here to stay, Presto and Stan have a lot of ground to cover but the race is on, and it will be a long, long time before any of us really know how many people are watching.  Until then, we’ll keep guessing, but lets question every guess ok?

Lets have our own fun with data.  Take the EFTM Streaming Video Survey.  Tell us what you’ve tried, paid for or have seen.  Keen to drill a bit deeper into the streaming market in Australia! Click here to take the 5 minute survey.