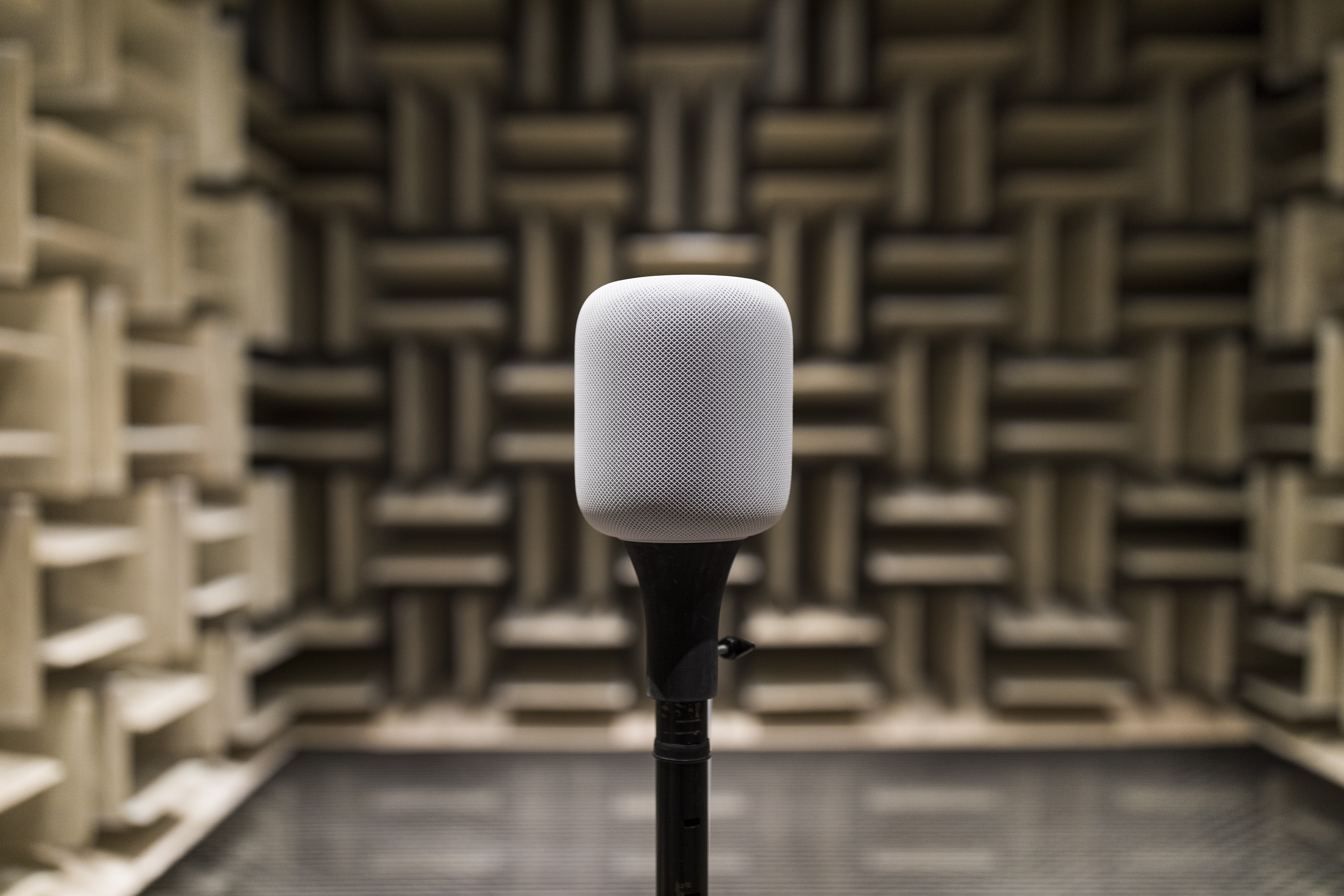 There’s something very different about Apple’s latest product the HomePod – it’s new territory for the tech giant and while they might be proud of what they have created there is some confusion as to where it sits in the market.

Perhaps that explains the unique and highly unusual opportunity I was given to look inside the research and development facility at Apple’s Cupertino Headquarters where HomePod was born.

The Apple Audio Labs sit within a rather nondescript building in a Cupertino city block in the shadows of the stunning new Apple Park headquarters. On this day, I would not only be shown where it is located, but taken on a tour inside for a more detailed look at HomePod just weeks before its launch. 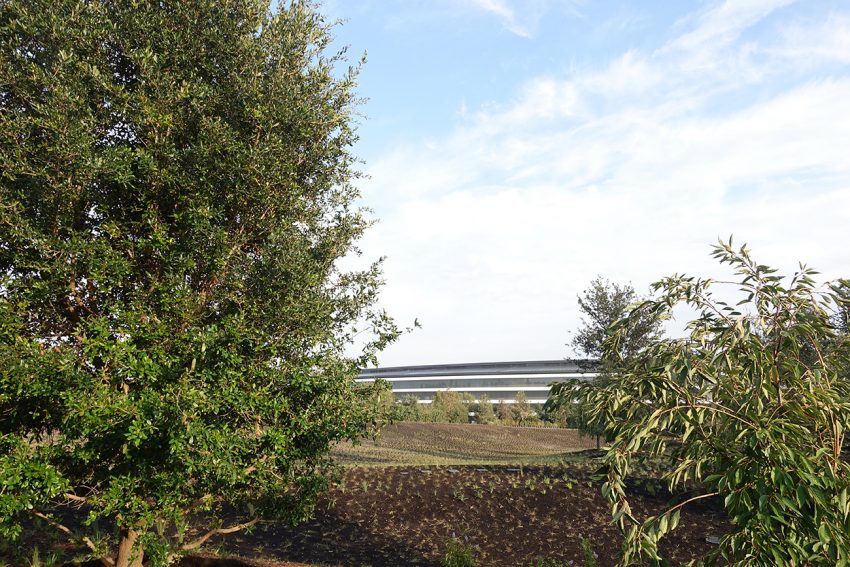 So important is this launch, my host for the tour is none other than Senior Vice President of Worldwide Marketing at Apple – Phil Schiller.

Schiller is one of the top ranking executives at Apple who shares the stage at product launches with the late Steve Jobs and now, Tim Cook, to reveal the company’s next big things.

And he doesn’t muck around either – stating from the get-go that “until today we’ve never had outside people in this place, it’s a real lab where work gets done every day, 7 days a week.”

Audio may seem like a new space for Apple, yet think about it – it’s critical to every product. Computers play sound when watching or listening to content and without audio – in and out, phones are useless.

And with the scale and importance of Apple Music it makes sense that a company so invested in music should take audio seriously – very seriously.

Schiller says that “less than a decade ago we started building an amazing audio team at Apple.”

The team, he goes on to say, works on many products “speakers and microphones in iPhone, speakers on ipad, even the microphone in the Siri remote on Apple TV and AirPods.”

And now – HomePod too.

Kate Bergeron, Vice President of Hardware Engineering at Apple, also joined the tour and spoke directly to the origins of the HomePod, “about 6 years ago a small group of folks got together ‘if we were going to do a loudspeaker design what do we think would be the right thing to do’”

Interesting, it’s the idea of a loudspeaker for the home, not a smart speaker to take on Google or Amazon, that pushed the development of this product. That’s evident in Apple’s entire approach to this product’s launch.

Ms Bergeron went on to say that concept of sound quality no matter where the speaker is lead to the array design that exists in the final product.

Inside HomePod are seven Tweeters, in an “optimised folded horn design” and one “high excursion woofer”

That Woofer is one hell of a component, I was able to pick it up as an individual part when shown the entire HomePod broken down into its parts and it was more than just surprisingly heavy – it was bloody heavy!

Sitting on an active suspension system inside HomePod it is able to hold its place despite movement of up to 20mm in the Woofer.

This feeds into the development and testing that is required, to ensure both high quality sound performance from the speaker, with no other noises or vibrations coming from the device. That can only be achieved through testing – and boy oh boy does Apple have some testing facilities. 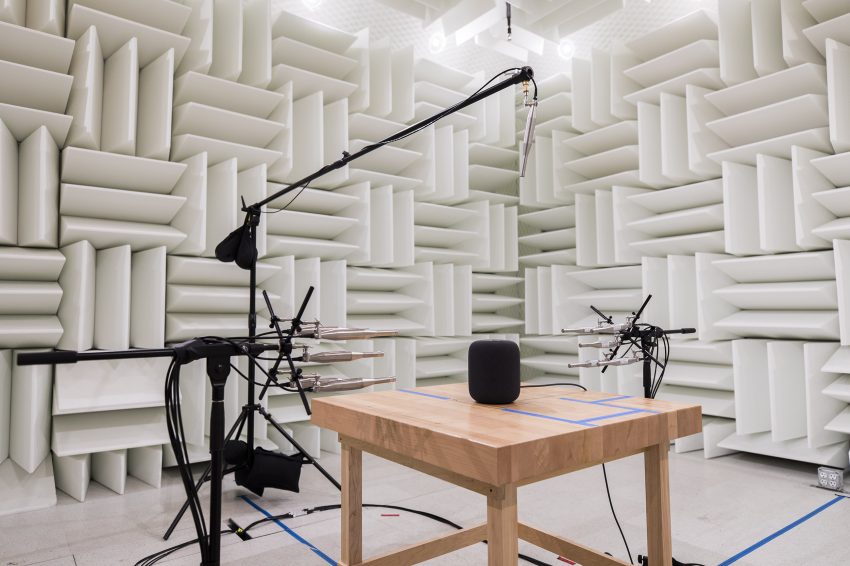 An extremely quiet Noise & Vibration chamber in Apple’s sound lab in Cupertino used to measure the noise floor of HomePod.

I’ve been lucky enough to visit the audio test facilities of Huawei and HTC in the past, and their Anechoic Chambers were impressive. From my short time inside Apple’s Cupertino Audio Lab I’m pretty confident they’d be the envy of many if not most audio companies.

Gary Geaves, Senior Director, Audio Design & Engineering at Apple isn’t going to flat out say it, but he’s pretty sure it’s the biggest team and the best facility “I’m convinced we have the biggest and widest audio team on the planet – I think in terms of breadth and number of facilities we have the biggest as well”

If you don’t know what an Anechoic Chamber is then let me tell you it’s really something to behold. Take a room and place wedges of foam on every single surface, roof, walls and often even the floor. These wedges of foam are designed and placed in such a way that allows them to absorb any sound wave that hits them.

In a normal room – your voice will bounce around the walls, and every room is different – so testing audio equipment in such a space means you can’t be sure what the real “zero” benchmark is. Within an Anechoic Chamber there is nothing but the raw sound. So much so that standing inside one for too long can send you almost crazy. There is a point where you can hear your own heart beating.

Combine this facility with Apple’s huge commitment to music through Apple Music, the $3 billion acquisition of Beats by Dr Dre and the recent half-billion dollar acquisition of audio and music matching service Shazam and you start to get the picture that Apple is taking Music – and Audio – very seriously.

This is not the new fancy Apple Park building, this is somewhat uninspiring inside – there’s no hint of Sir Jony Ive, Apple’s Chief Design Officer, ever having been part of the design team for this office space, yet as I wander down through the office there is a distinct hint of the secrecy that must exist within Apple’s own walls.

Black barriers are available here there and everywhere to shield the workspaces from prying eyes when required (and also provide acoustic buffering), and above us, built into the facility as much as the fire sprinkler system at your office is meters and meters of curtain rails, similar to the ones you see that separate beds in a shared room in a hospital ward.

Those rails run along behind workstations with black curtains available to be pulled at any time. Half the workstations are behind curtains as we wander through.

I can imagine secretive desk meetings and tests with pipeline Apple concepts like HomePod over many years being conducted behind these curtains while at the next desk another engineer perfects the algorithms for the iPhone’s microphone to ensure our phone calls sound as crisp and clear as possible.

Back to the impressive Anechoic Chambers. Telstra has one in Western Sydney where they test phones for Blue Tick regional coverage. That tiny box is the size of the freezer unit at a small cafe. It’s a “small” chamber in Apple’s world. They have six of them. 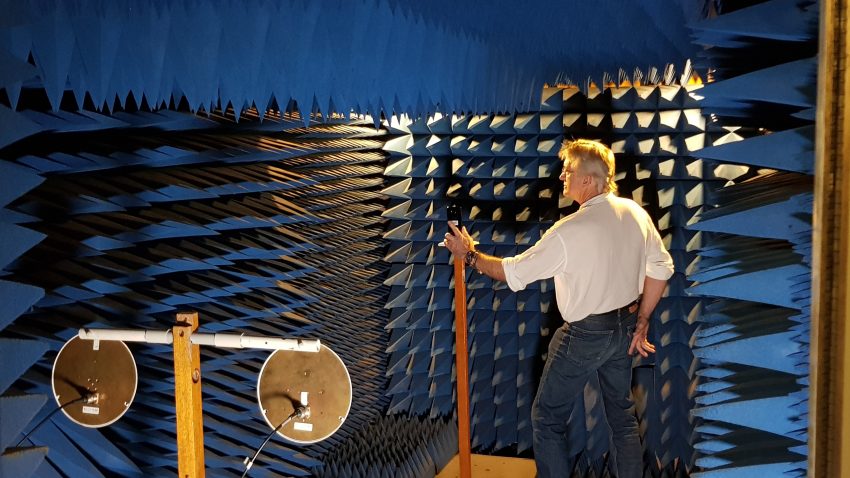 Huawei’s impressive Anechoic chamber is medium on Apple’s scale – there are five of these in the one facility I visited.

Yet it’s the largest room, constructed specifically to test HomePod that is the most mind-blowing.

A room within a room, this chamber is built with almost complete separation from the outside world. Huge isolating springs sit under it to completely remove the effect of sound from nearby construction from the chamber – and it doesn’t stop there. 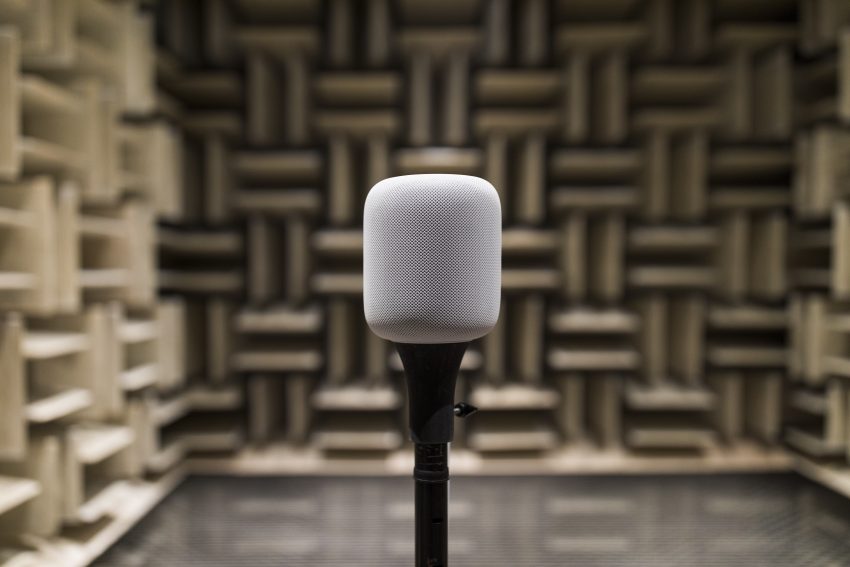 Inside the room a thick metal mesh acts as a floor, bouncing like a stiff trampoline to allow me to walk inside and see the equipment in use to test Apple’s HomePod.

This chamber alone can measure down to 20Hz and up to 20KHz – the entire frequency band of human hearing.

Inside is a huge circular frame which on one side has an array of probably 50 speakers pointing at the HomePod device which is positioned in the centre, and on the other side of the frame are as many microphones. This setup allows audio engineers to measure exactly what sound is going where as the HomePod is rotated in the centre to test its beam-forming audio capabilities. It’s a mind-boggling setup for what many will see as “just a speaker”.

An extremely quiet Noise & Vibration chamber in Apple’s sound lab in Cupertino used to measure the noise floor of HomePod.

Oh, and that’s just one of the large chambers, a hemi-anechoic chamber (one with a hard floor) is just down the hall, made up of 27 tonnes of steel walls and panels sitting on a 28 tonne slab of concrete with 80 separate mounts between the steel chamber and the slab.

Inside that chamber the sound level is -2 dba. Human hearing threshold is 0dba and a recording studio would normally be around 20dba.

Each and every anechoic chamber is lined with wedges of sound absorbing foam to ensure the most robust audio testing possible.

Yet there are also rooms built to simulate the average family home. After researching and conducting sound measurements in the homes of hundreds of Apple staff, an “average room” was built – to ensure that before a product leaves the lab for real world testing, it has already been tested in a real-world like environment.

Phil Schiller points to the attention to detail that goes into an Apple product – like HomePod in this purpose-built facility “that extra attention to detail, that extra focus on making something that we’re all proud of comes from real, serious, brute force engineering work that the team does here”

They even have a noise and vibration lab – which back in the day was focussed on minimising things like hard disk noise and fan noise in computers. They are now part of a whole audio team and have spent the last five years focussing on electronic noises from things like capacitors – noises you probably haven’t even noticed – but Apple does. 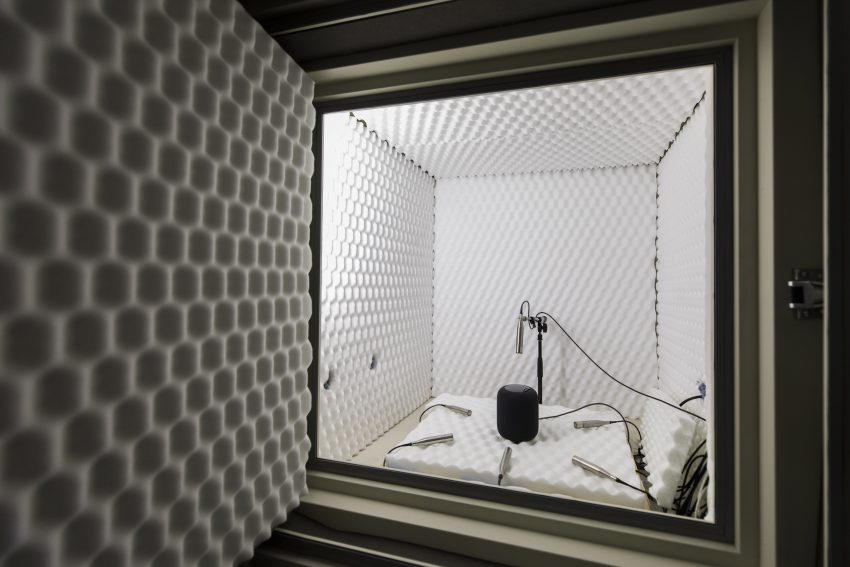 When asked about HomePod, and the many years of development, Gary Geaves told us that “in a new product category there isn’t a deadline, you want to have something that is compelling for customers”, going on to say “the whole product from conception to execution took more than 6 years” adding “you don’t do anything if you don’t have something compelling”

Six years in development – a speaker. Does it live up to that expectation of sound quality? Yes. Will it be a global smash it? Only time will tell.

Apple has put their HomePod into an exclusive price bracket, with and in many ways above the likes of Sonos and Bose who have long established sound credentials.

If anything, this tour was designed to slam their credentials down on the table to be taken seriously as a speaker company, not as a smart home assistant. HomePod is not a voice assistant first and a speaker second, it’s a speaker with an intelligent assistant built in. How Apple manages to counter the constant comparisons to Google and Amazon are a whole separate issue, how they fair in comparisons to the biggest and best audio brands on the planet is what’s going to matter to the men and women of the Apple Audio Labs.