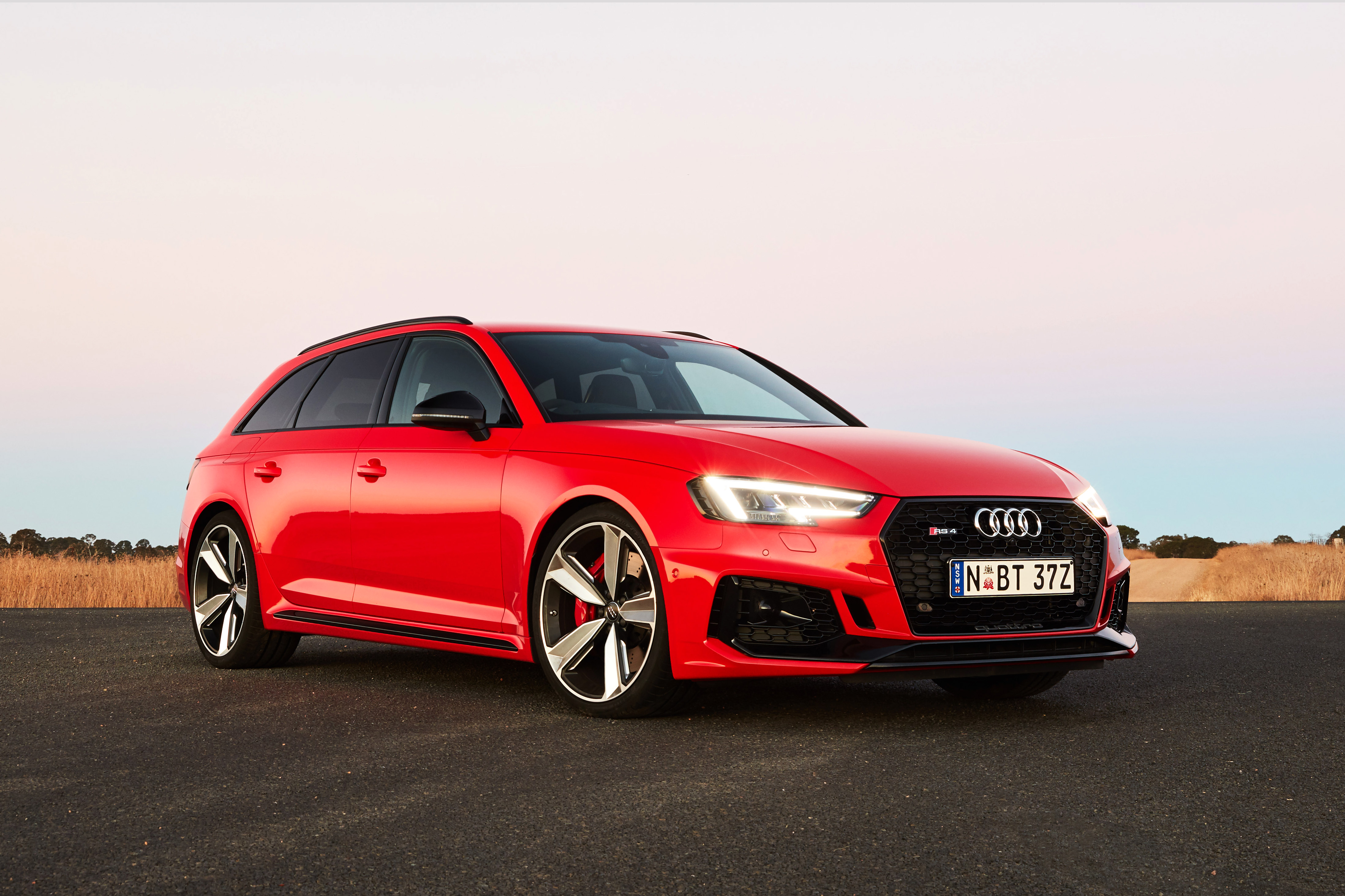 The station wagon is a real rarity these days. For some reason people like the idea of a high-riding SUV and the subsequent poorer handling characteristics. Some even avoid using the term entirely instead using fancier monikers such as ‘Sportsbrake’. I’m talking to you Jaguar! Spotting a Euro sedan in the burbs is even rarer. Sure the Audi RS4 Avant is indeed a wagon, but it’s also one of the craziest cars I’ve driven. 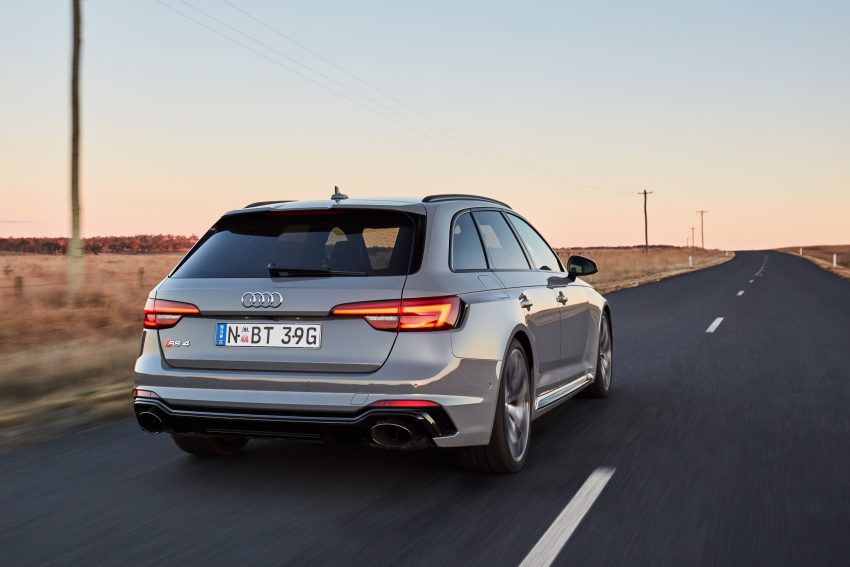 Audi dealerships look just as sophisticated as the cars themselves. The Sydney building dubbed the ‘Lighthouse’ was at one point the largest Audi dealership in the word. The unique design and architecture theme flows into all Audi vehicles. They really do have an edge over Mercedes-Benz and BMW, particularly when it comes to interiors.

Once you slide into a RS4 Avant for your first test drive you’ll be greeted by all the usual Audi signature design elements. The horizonal vents spanning the entire dash, remarkable ‘Virtual Cockpit’ instrument cluster, floating infotainment screen, impeccable use of materials and overall sense of bank vault build quality. If anything, the entire Audi line-up is almost identical from behind the wheel, a great thing but if individualism is your thing perhaps not. 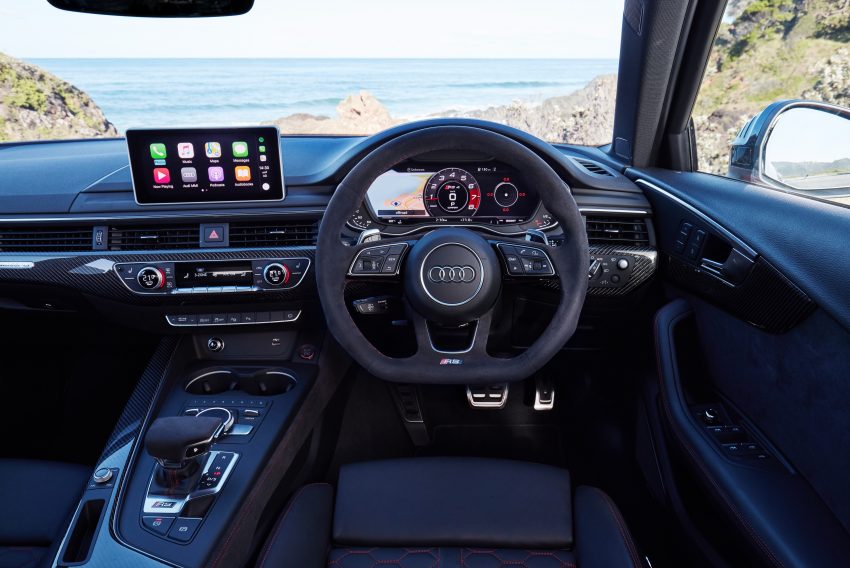 But hey this is a RS4 Avant, only around 600 of them have left dealerships over the last three generations so you’re about to fire up something very few have. The 4.2-litre V8 is gone, so turn away now if that’s an insurmountable hurdle for you. The 2.9-litre bi-turbo V6 comes to life with a bark then settles down into a calm, yet at the ready, soundtrack.

The ride is comfortable and certainly gives you no indication this is, as Audi likes to say, “an everyday supercar”. But give the throttle even half a shove and this car takes off like it’s been rear-ended by a road train. You can go from absolute serenity, gliding along with the standard panoramic sunroof open allowing the cabin to fill with light, to lunatic speeds in mere seconds. The included sports exhaust will let all and sundry know this is an undercover rocket ship, a station wagon with a black belt.

Clearly performance is a priority but the overall design I think has been absolutely nailed. The fat twin oval tailpipes, rear wheel arches that have been pumped out an extra 30mm and overall 16mm width give the Avant a commanding presence, from all angles. 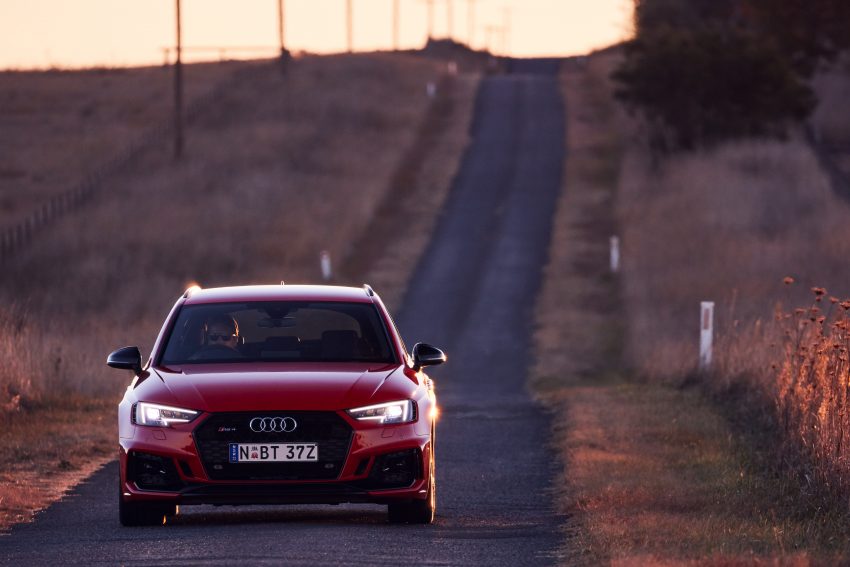 The new V6 weighs 31kg less than the almost Jurassic outgoing eight-pot, in fact the car itself is overall 80kg lighter thanks to various weight saving measures. 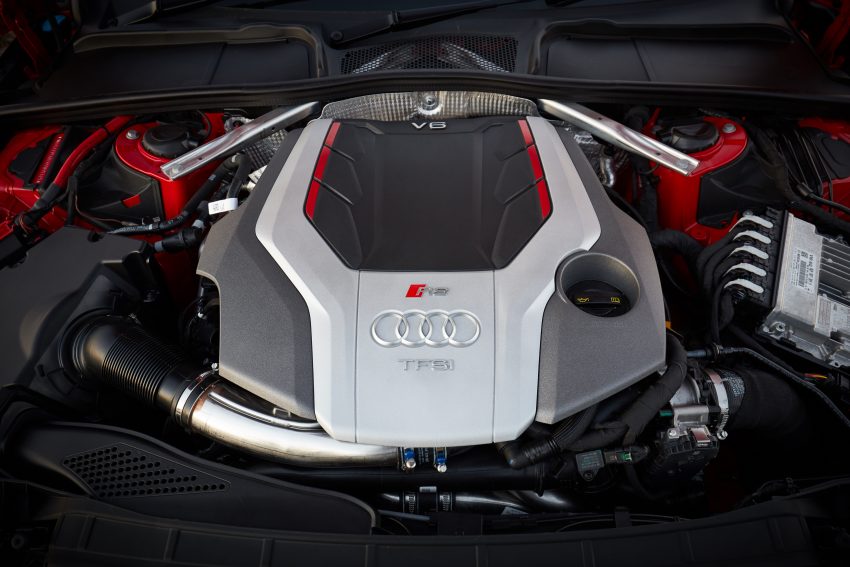 The gloss red brakes are massive, with 375mm calipers at the front and 330mm on the rear. Although you can option 400mm grey painted front anchors, for a price.

20-inch alloy wheels come as standard with a five-twin-spoke edge design. You can option a matt anthracite black, gloss milled finish for an extra $1,600 if you so desire.

As is the norm, there are several optional packages to spice things up. On the styling front you can go for carbon and matte aluminium, carbon and black or just a gloss black package. An RS red Design package introduces Alcantara and red stitching to various parts of the cabin and the obligatory RS logos on the front floor mats. A Technik package adds the remarkable Audi LED matrix headlights, head up display and wireless Qi standard phone charging.

All this performance and up to 30 driver assist systems is all wrapped up in a package that can hold 505-litres of luggage in the rear or 1510-litres with the rear seats folded down. IKEA anyone? 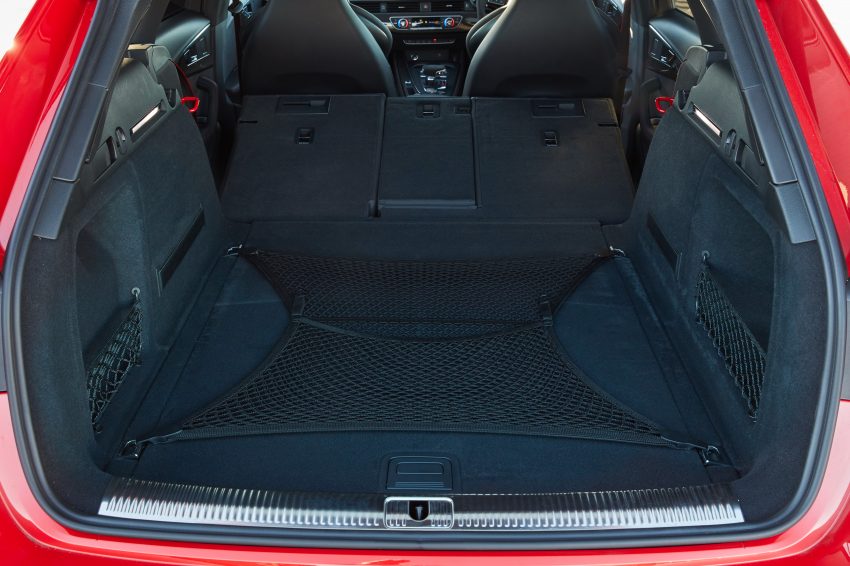 But How Does It Drive?

This is the most fun I’ve had in a car this year. The launch drive from Port Macquarie to the Barnaby Joyce Airport at Armidale included the Oxley Highway. This road is heaven for a purist, with never ending twists and turns and a constant rising elevation.

To put it bluntly, Audi’s in general make you feel like you could take on Daniel Ricardo. The road holding ability of this RS model is freakishly excellent. The quattro all-wheel-drive system normally distributes torque 40:60 in an asymmetrically fashion. However, when using ‘Dynamic’ mode up to 85 percent is sent to the rear axle. Basically, this means you can plough out of corners with enormous confidence, with the added surety of a sports differential for flawless traction control.

With up to 30 driver assistant systems at play you’d have to be driving like a complete imbecile to cause any carnage. Listing off Audi’s safety systems is a boring exercise. But this is a car that will try and prevent a head on crash, strobe the rear brake lights if it senses that white Toyota Camry is about to rear-end you and won’t let you open the door into an oncoming cyclist for example. The ‘pre-sense’ system will even operate right up to 250km/h, not too relevant in this country of course.

The RS4 Avant slices up corners in such a ridiculous manner that you almost forget about the immense power on tap. This is a car that will see your licence gone very quickly. There’s some occasional turbo lag if you don’t time launches out of an apex but honestly give me this precise weapon over the V8 any day of the week. The eight-speed tiptronic gear box is lightening quick and makes you want to use the paddle shifters for even more fun. The only reminder that this is a wagon is the occasional bit of floatiness in the rear end, at least in my opinion. 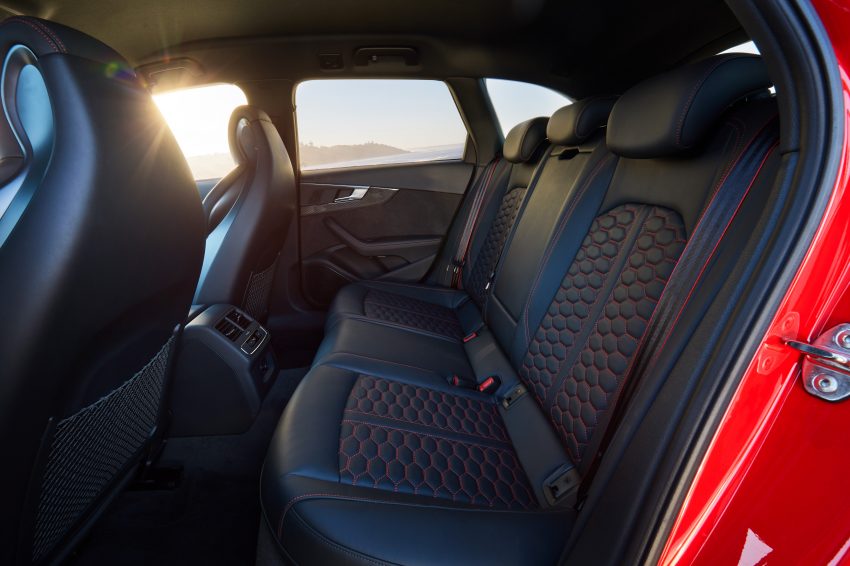 More than 100 hundred orders have been placed for this $152,900 car. But of course, with inevitable options, the overall price could rise to $165,546 as was the case for one of the models I drove. But at this level, forking out $3,900 for the Technik package or $1,846 for red pearl effect paint is probably not an issue for such a well-heeled buyer.

The Audi RS4 Avant is a masterpiece of practicality and performance. This is a car that can be driven to Westfield Bondi during the week then annihilate a racetrack on the weekend. It’s the stuff of dreams, I’d have one in a heartbeat. I award the Audi RS4 Avant the EFTM Distinction Rubber Stamp of Approval. 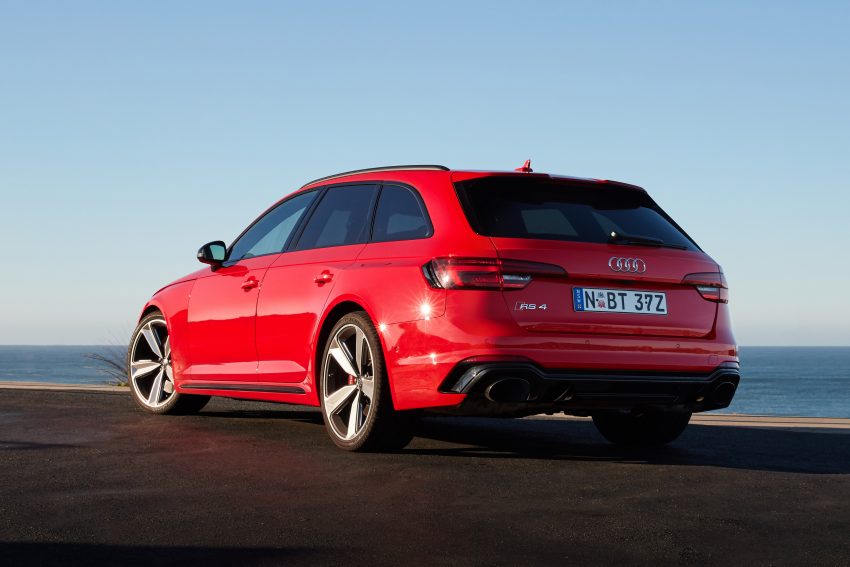