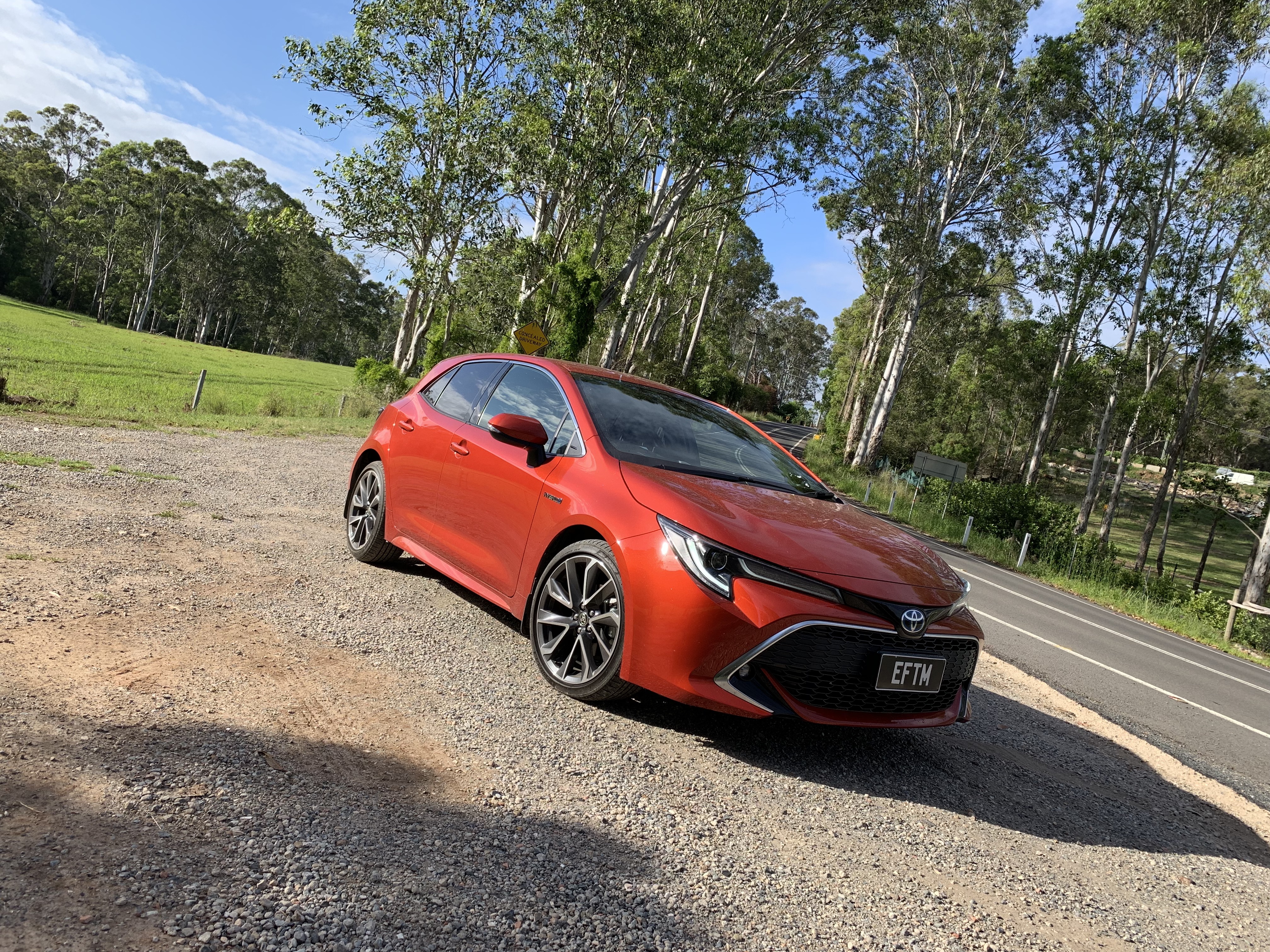 Back in August I found myself in Noosa, QLD for the local launch of the 2019 Toyota Corolla. This is one of those badges that is all too easy to bag, but ultimately the world’s best-selling car needs to be acknowledged. I’ve just spent a week in the flagship Toyota ZR Hybrid to really hone my thoughts. As a result I now admire what Toyota has done with their bread and butter even more than before.

The ZR Hybrid is the range-topper in a three-model line-up, sitting above the Ascent Sport and SX. It’s a clean sheet design, for those who like the nitty gritty details it’s also built around a new platform. The Toyota New Global Architecture (TNGA) allows the brand to build a number of other models around it, saving costs.

The new Corolla hatch is lower and wider than its predecessor, has a stack more standard technology but most importantly is far more attractive. The name “Corolla” has attracted its fair share of mockers purely based on conservative looks. Toyota in general, as you’ve probably noticed, has being playing it safe style wise for eon’s.

Typically for this category it has five doors and can seat five. But the range also throws in the option of discarding the 2.0-litre four-cylinder engine for a 1.8-litre hybrid combo for an additional $1500 across the range, as tested here. 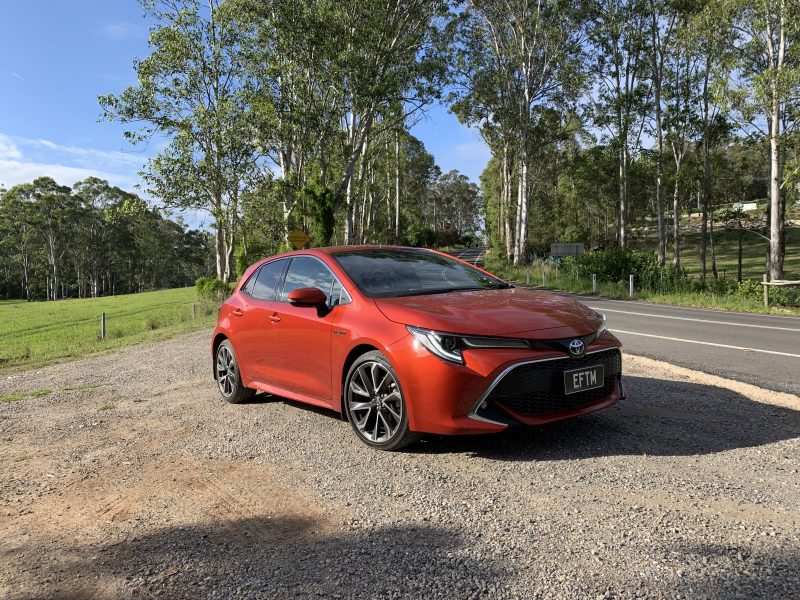 I wouldn’t quite say the Toyota Corolla has gone upmarket but from behind the wheel, big changes have certainly occurred. The top of the dash is broad enough to create an airy feel. A horizontal satin trimmed line divides it, only interrupted by a rather prominent 8.0-inch colour touchscreen.

The instrument cluster is bright and colourful thanks to a 7.0-inch Multi Information Display only found on the ZR variant. There’s a clear and crisp head up display, angular air vents sit in the corners, plus a stitched leather look upper dash and suede sports seats complete the picture. 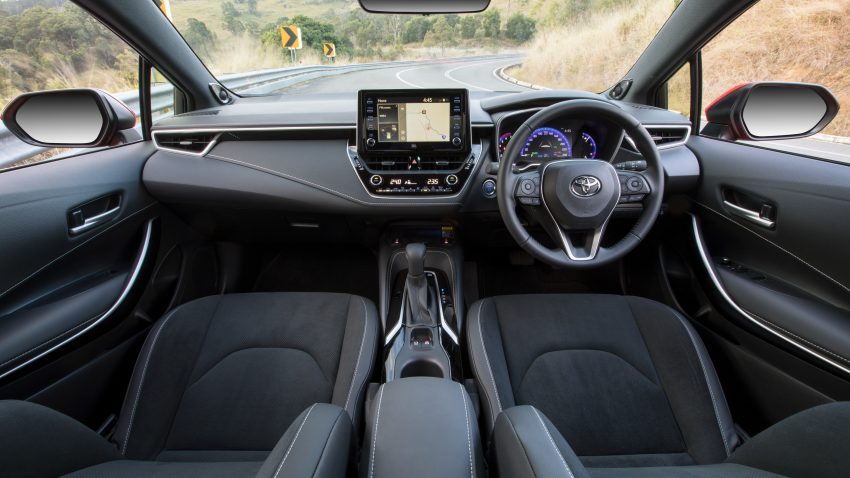 Overall it has lengths on the outgoing model but falls someway short of what a Mazda 3 hatch offers for example. Let’s just say it’s an impressive effort, deserving of a participation award. Like the kids get that don’t make first, second or third in a race.

As a drive the Corolla has come a very long way indeed, it falls short of the locally tunned Hyundai i30 handling wise – leaning towards a safe and neutral feel. The lower stance and added heft of the hybrid battery add to an enjoyable drive. It is well insulated, which really came to my attention when I found myself covering a stretch of unsealed road due to road works. 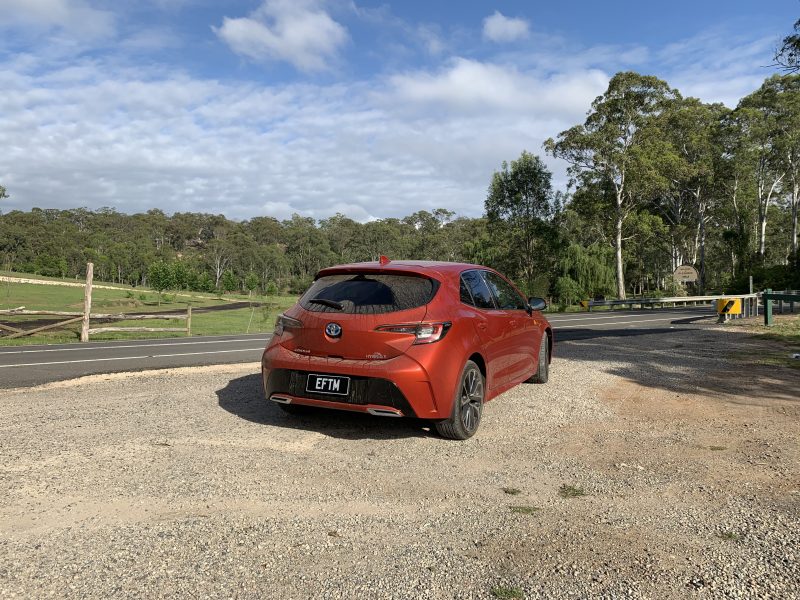 The hybrid model does lack some poke, pumping out just 90kW but is more refined overall when stacked up against the 110kW petrol unit. Plus, Toyota really know what they’re doing when it comes to hybrid drivetrains, with a couple of decades of experience now.

The wooden-type feel that is not uncommon with hybrid braking systems is still there, regenerative power recovery being the villain. But it’s something you get used to quickly. 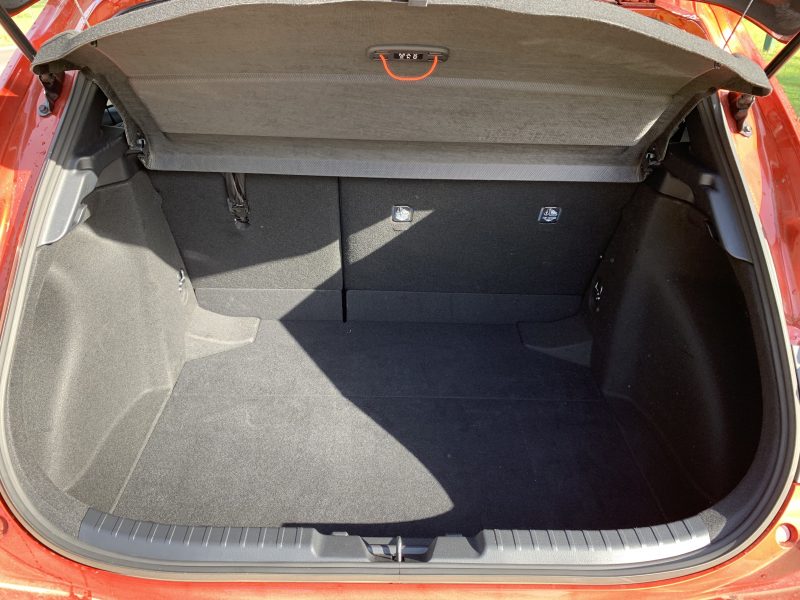 The 1.8-litre hybrid model sees maximum power of 72kW at 5200rpm and peak torque of 142Nm at 3600rpm. The main electric drive motor produces up to 53kW/163Nm. When all these figures are combined it’s a 90kW engine. Power is sent to the front wheels via a CVT transmission that doesn’t feel as buzzy as when applied to the petrol model.

As I mentioned adding the hybrid option adds a mere $1500. Unless you really want a tad more punch I can’t see why you’d choose the petrol. Although having said that our Editor Trevor Long did manage a sub 5.0L/100km fuel economy figure on the Ascent Sport Petrol model via a trip from Sydney to Newcastle and back. The claimed figure is 6.0L/100km, so he’s clearly the James May of EFTM.

I consistently maintained 4.7L/100km in the hybrid which stacks up well against the claimed 4.2L/100km. 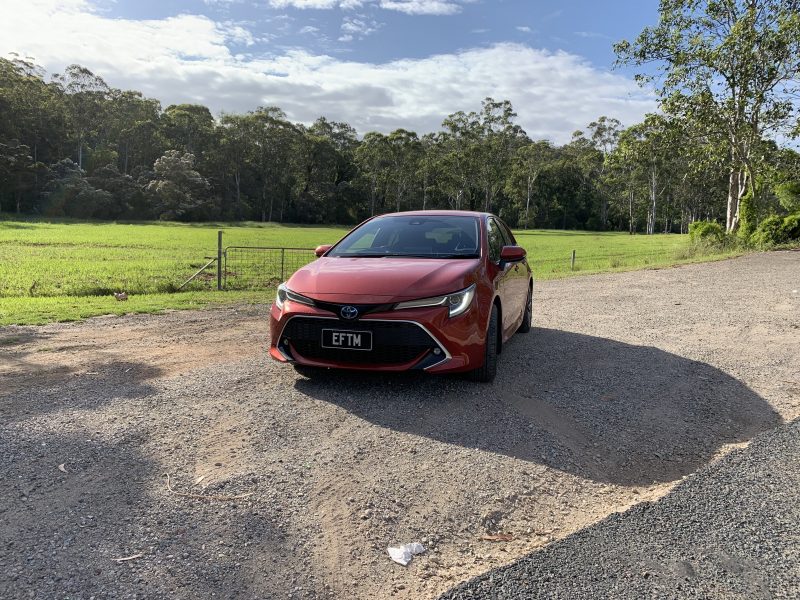 I’ll get the white elephant sitting in the room out of the way now. Apple CarPlay or Android Auto is not available. Why, I have no idea, nor do Toyota Australia. Let’s just say it’s a head office call.

But it’s the list of standard safety features in the 2019 Toyota Corolla that impressed me the most. A pre-collision system incorporates pedestrian detection, day and night. It can pick up cyclists as well but only during daylight hours. Autonomous Emergency Braking (AEB) is also included free of charge. You may never need any of these systems, but it could well pay to not simply and naively gloss over what I call “hidden tech.”

The list continues with Active Cruise Control and Lane Departure Alert, although the latter only vaguely intervenes if required. We’re seeing more and more speed sign recognition software which is also standard on the Corolla. A front facing camera can literally read speed zone signs, so you’re never in doubt about the legal limit. It’s not an imperfect system, occasionally missing signs and picking up 40km/h reminders that are placed on the back of buses.

Before on-road costs The Toyota Corolla ZR hybrid starts from $31,870. If you so desire, you can fork out an extra $1,000 for tinted windows or $550 for premium paint. Toyota still offer a three-year 100,000km warranty, strange stuff considering the now common five and seven-year warranties offered by competitors. However, it’s worth noting the first five services are at 15,000km intervals costing just $175 each.

I’d suggest many Corolla buyers are return customers, we’re talking about a badge that’s now in its 12th generation. The standard safety features are an attractive proposition, as are the new looks. But ultimately the durability reputation that precedes it will see plenty walk through the doors of Toyota’s massive dealer network across the country.

It’s always good to sample a new model away from the carefully controlled “launch”. My week with the Corolla ZR proved to me that the 2019 arrival is not just full of incremental improvements but is in fact a massive leap forward in every area. The Toyota Corolla ZR Hybrid earns an 8 out of 10 from me.