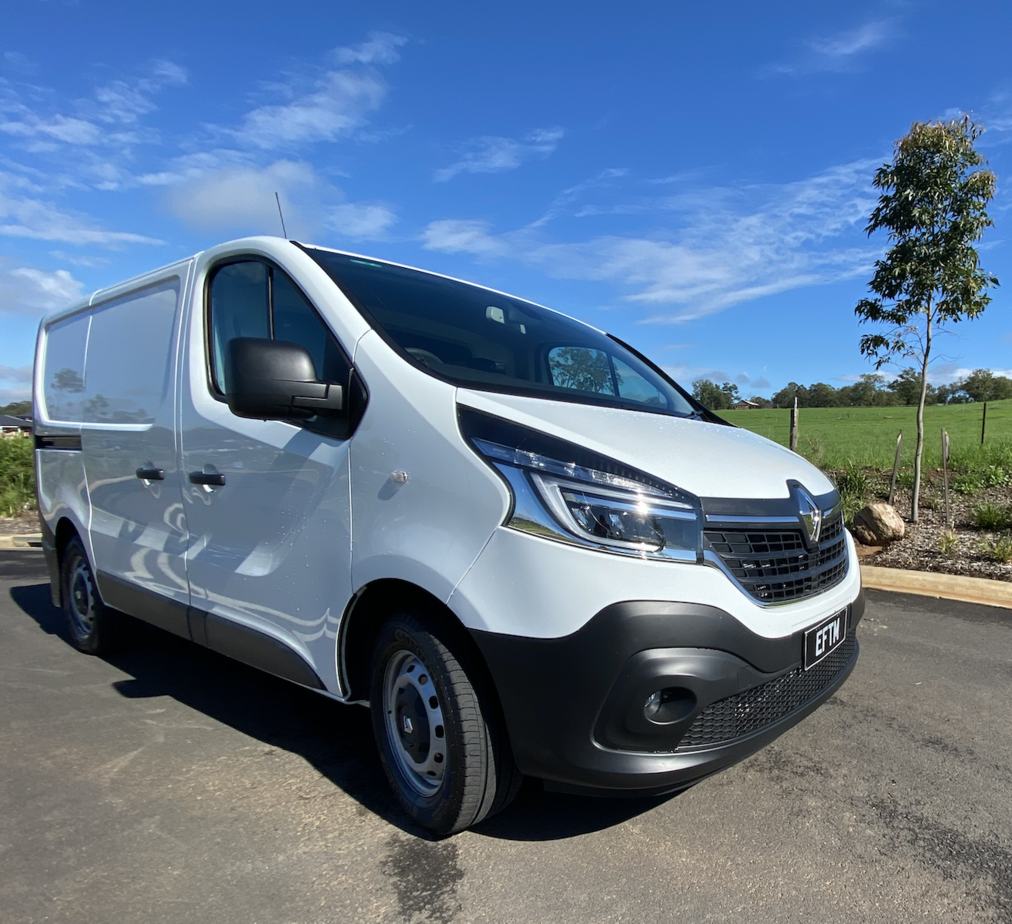 The life of a courier driver is a very tough one, they easily rack up a few hundred kilometres a day having woken way before dawn. They’re also regularly verballed by impatient customers who literally shoot the messenger. But if this job is your go, why not do it in comfort. Recently I’ve been hooning around in the $43,490 Renault Trafic Short-Wheelbase (SWB), which now comes with an Efficient Duel Clutch automatic transmission (EDC).

The new auto is in fact borrowed from the Megane Renault Sport. Which is partly why I had such a good time. It takes a few minutes to get used to driving what is a fairly large vehicle, but the gearbox is slick and quick, giving this commercial vehicle better drivability.

As I scrambled up and into the Trafic the first thing I noticed was the centre arm rest to my left, basically like what you’d find on a plane. It can go up and down and would be a perfect way to claim your “space” away from the apprentice tradie onboard.

Visibility is excellent from your own elevated throne. The windscreen is wide but steeply raked. Behind the front three seats is a bulkhead that has a narrow window. That gives you the ability to have a good view out of the rear barn doors. Of course, that depends on how much you’re actually carrying.

The side mirrors have a lower magnified section to help with blind spots, there’s an auto diming rear mirror and a pleasant, colourful infotainment system. The auto is paired exclusively with a 2.0-litre four-cylinder turbo-diesel.

I jumped into the Trafic, not knowing a thing about it. But straight away it was obvious the power and torque balance were in the right groove. It was great to find out I was right, thanks to 125kW at 3500rpm and 380Nm of torque at a low 1500rpm.

I drove the Trafic empty, so one full of stock would be a different proposition. It has a payload of 1250kg, but the manual can cope with up to 1274kg, plus can tow up to two tonnes.

The Trafic SWB has 5.2 – 6m3 of load space. Perfect for a forklift to place a pallet that will fit between the rear wheel arches.

This generation of Trafic was launched in May 2015. It’s a good looker, for a van. The new Renault C-shaped LED daytime running lights, as with all new Renault SUV’s are a standout while the logo is bolder and bigger. Driving at night is now much safer with auto LED headlights, they’re 50 per cent brighter on high beam or 20 per cent when dipped.

The cabin is clearly hard-wearing, but you never feel like you’re driving a tractor. There’s also a mobile phone holder. To keep you safe there are front and lateral curtain airbags standard across the range.

The infotainment system is running Renault’s Media Nav Evolution. It supports both Android Auto and Apple CarPlay. If this is your mobile office, you’re going to need storage. The brand claims all up there’s 90-litres of space. There are plenty of spots to hide things, even the centre seat can be folded down allowing for a laptop or clipboard to be angled your way.

The rear cargo bay has new LED bulbs that offer 500 lumens, so you’ll find the 18 tie-down points much more easily.

All Trafics come with a three-year/unlimited km factory warranty. You can extend that to  five years/160,000km by forking out some extra cash.

Servicing intervals are huge at 30,000km or once a year. Capped price servicing sees $549 locked in for each of the first three trips back to the dealership. Renault also provides Roadside Assistance for up to four years.

Despite what you may think, I’m always happy to drive anything. The Renault Trafic SWB with EDC is easy to manoeuvre with a spritely engine. It’s also a very comfortable mobile office space. It’s an 8 out of 10 from me.