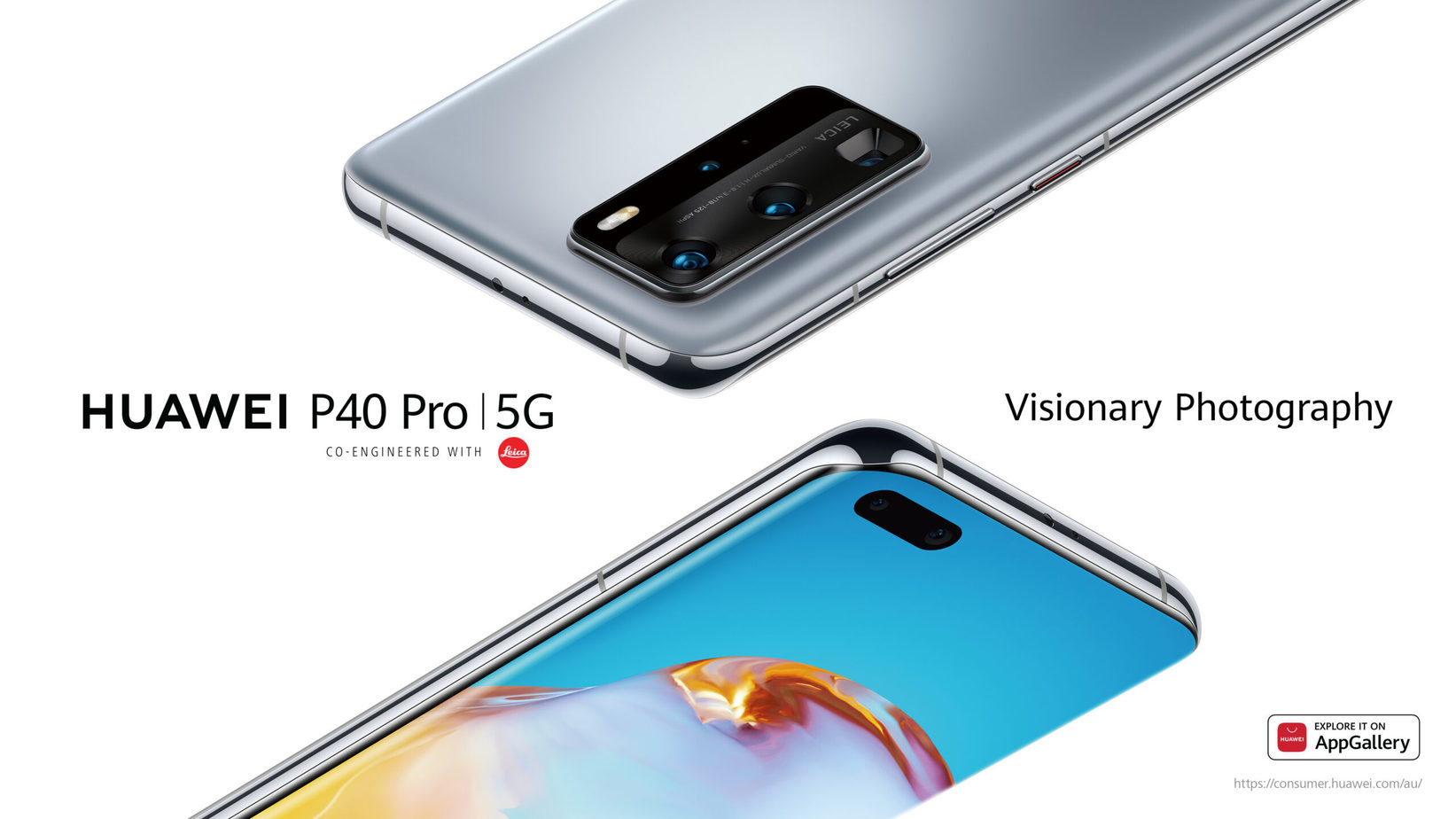 Previous P-series phones have pushed limits on design, style and the camera for Huawei, and the P40 series is no different.

The P40 features a new overflow display which offers full edge to edge design flowing over all four sides of the front of the phone giving a larger screen to body ratio. The display is 90Hz which makes it appear smoother when scrolling through your phone or playing a game.

It comes in two sizes, 6.1-inch for the P40, while the P40 Pro will have a 6.58-inch display. The display is functional as well with a built-in fingerprint scanner which has a 30% larger surface area, and is 30% faster. There’s also a punch hole for the front facing camera.

Under the hood, Huawei hasn’t skimped using their Kirin 990 5G processor includes the Balong 5G modem and is built on the 7nm process for improved power efficiency. The Kirin 990 5G is paired with 8GB RAM and 128GB (P40) or 256GB (P40 Pro) storage.

Huawei has always had something interesting when it comes to colour options and the P40 is no different. For the P40 Huawei will be launching the phone in Australia in two colours, Silver Frost and Deep Sea Blue, and I’m torn as to which is hotter.

Camera
Like previous P-series phones, Huawei has been inspired by point and shoot cameras. To achieve the same quality of shot, Huawei has again partnered with Leica to co-engineer a new, larger camera island incorporating what Huawei call ‘the most professional smartphone camera system ever’. The camera island includes an improved camera array which incorporates a Huawei Ultra Vision Sensor, SuperZoom Array and what Huawei describe as ‘pro-level cinematic features’.

The P40 Pro gets some pro-level Cine Camera features with audio zoom which focuses on the speaker in a video, steady Telephoto, ISO up to 51,200, a Super Slow-Mo video mode at 7680fps (at 720p res), HDR and 4K Timelapse, 4K video recording @ 60fps and pro mode.

Huawei is also introducing new AI options to the camera with Golden Snap. This new feature is focused on sports photos, with the camera able to identify seven different sports including Skateboarding, Golf, Tennis, Basketball, Football and more and identify the best shot. To achieve this Huawei captures frames before you tap the shutter and some frames after, then offering what it feels is the best shot – but of course you can save the shot you like yourself.

Huawei is also introducing two more great new features: the option to remove people in the background, and remove reflections, great for a trip to a museum or taking pictures out of a window.

Software
The Huawei P40 series runs Android 10 with Huawei’s EMUI 10.1 over the top. The obvious elephant in the room is the lack of Google apps and services but Huawei is pushing ahead with Huawei Mobile Services (HMS) to fill the gaps.

The app catalogue is fairly impressive, but there are holes and to combat this Huawei is introducing a new feature which lets you download APK’s (Android apps) through a browser. They talk about official apps like Facebook and WhatsApp, but it will be interesting to see how this goes with APKs for other apps.

Huawei Music and Video
As well as apps and games, Huawei also wants to get into music and video distribution launching HUAWEI Video, and HUAWEI Music outside of China.

Huawei Music will be launching with more than 50 million tracks and podcasts in the catalogue from 600,000 artists. Huawei Video will launch with more than 50,000 different popular shows, movies and more including titles from BBC News.

To promote the service Huawei will be offering 3 month free access to Huawei Music to all Huawei users.

Availability
The P40 and P40 Pro will be available for pre-order from this Friday, the 27th of March, with stock will be in-store and ready for sale from Thursday the 16th of April.

Huawei hasn’t announced any carrier partnerships for the P40 series, instead making it available directly through retail. The P40 will be priced at $1,099 while the P40 Pro will set you back $1,599. JB HiFi and Officeworks will sell the P440 Pro, while the P40 will be available from the Huawei Authorised Chatswood Store, Mobileciti and Harvey Norman.

As a bonus if you pre-order the P40 Pro between the 27th of March and 15th of April you can also score a pair of Huawei Freebuds 3 – which are really good, and you also get access to Huawei’s complimentary VIP service which will help you set up your new device.