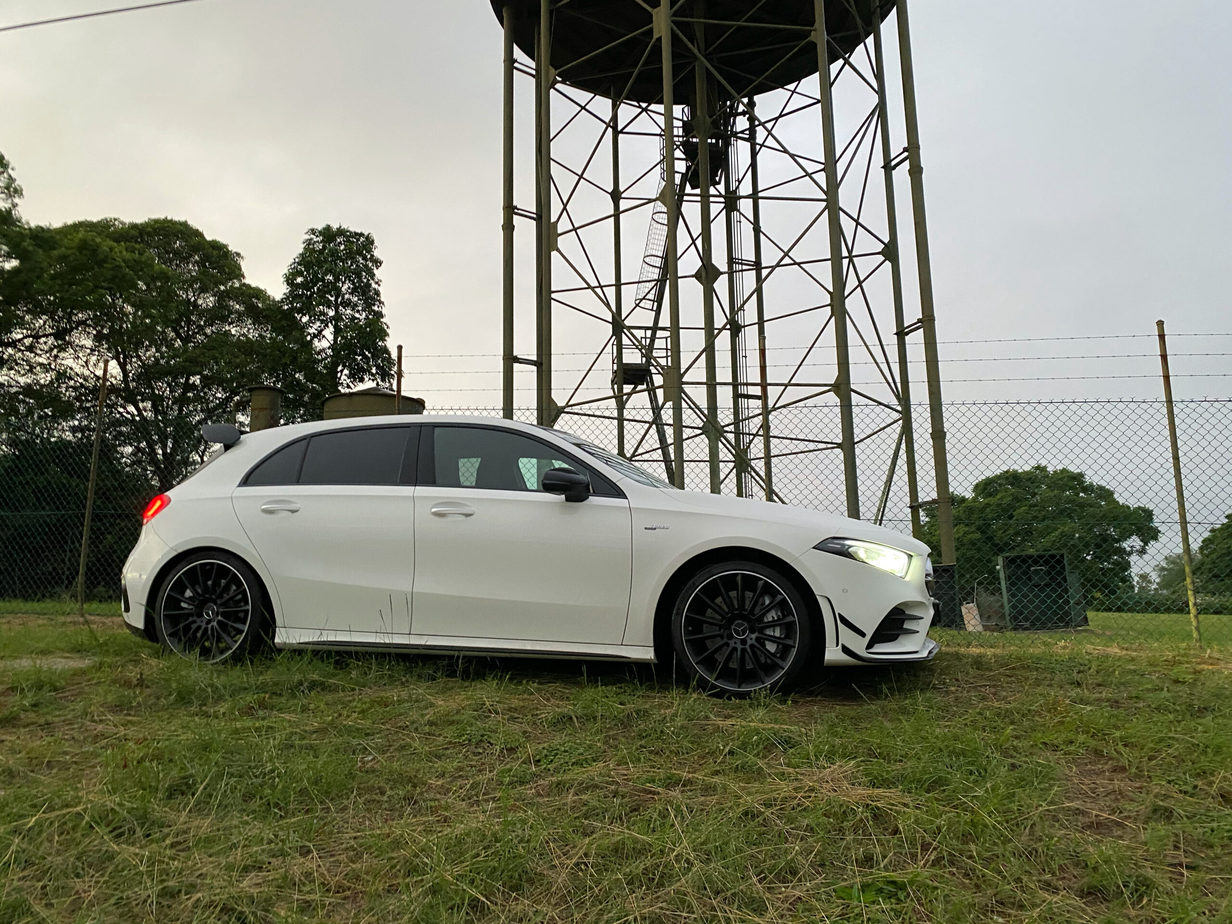 I’ve found a car for responsible, law-abiding citizens that still allows you to feel like Lewis Hamilton, just every now and them. Even better it’s the cheapest way to score an AMG branded Merc. It’s the Mercedes-Benz A35 AMG hatch and I L-O-V-E it.

People who buy this car are also acutely aware that the A45 will arrive soon, with a four-cylinder that produces more than 300kW!

But for now, let’s stay on point. The A35 could very easily slip by you and not even raise an eyebrow, but surely most people will fork out for the $1915 aero pack. That gives you a completely unnecessary rear wing and aero fins on the front bumper, but hey it looks hot.

The A35 also scores the Mercedes-Benz MBUX infotainment panel, or plank. The plank is two 10.25-inch displays that are so bright and crisp there’s no need for some hood over an old school instrument cluster.

The steering wheel alone is something you’ll need to get your head around. Sure, turn it left and the car will go left and vice versa. But who needs to know such mundane things? The wheel has thump touch pads that allow you to scroll through menus plus twin-dials that allow you to adjust driving modes and suspension performance.

The interior is pretty wild, somehow Mercedes-Benz has managed to work in ambient lighting, that’s even effective during the day. Even the jet turbine style air vents have a central sphere of light that glows all day, like the afterburners on a jet.

These days a very quick car needs to hit 100 clicks under five seconds, well this does in 4.7 seconds. A 2.0-litre turbocharged petrol engine unleashes 225kW and 400Nm of torque. Power is delivered by a seven-speed dual-clutch that performs snappy shifts, especially via the paddle shifters.

The MBUX system commands respect, but you do need significant tuition to grasp it. There are things behind the splendid display that are, well unique. Energising programs designed to refresh or revitalise you. The system uses what it calls “seat kinetics” to have the lavishly appointed seats prod you in various places. At the same time a generic and up -ifting track is played. The air-conditioning, including the seats pulses through different levels of coolness.

It’s fucking random, but you know what? I’m down with it.

The display can be figured to have various themes, each one beautifully detailed. Focusing on things such as performance and trip data. The whole “Hey Mercedes” voice assistant is really not required, especially if you’re using Apple CarPlay or Android Auto.

But this is also a performance car, so let’s zero in on that for a sec.

You are never left any doubt that the A35 is geared towards extracting every last bit of AMG’s work possible. What this means it is a tumultuous ride, on the back roads. The front wheels follow imperfections like a tram, you do find yourself wrestling with the wheel just a tad too much, even in comfort mode.

But if you need to sneak away from the city, the A35 really is one of the great corner-to-corner drives. The 4MATIC AWD system can send up to 50 per cent power to the rear wheels, some might prefer more than that, but I’m not looking to lose my licence. There’s a host of trick traction control systems working together to make sure you exit the corner rather than drift through it.

Fuel economy is rated at 7.8L/100km, I actually failed to check mine. But I feel it would be around 10L/100km. Just last month Mercedes-Benz finally offered a five-year unlimited kilometre warranty, as opposed to just three.

I can’t say this is affordable, because it’s a hatch that will ultimately costmore than $70,000. But I have this little test I do; it’s called the Bowen Backyard Blitz. It’s basically a rural back road in my area. If the car smells like it’s about to catch fire, I know its limits. The Mercedes-Benz A35 AMG arrived home like it was just warming up. It’s an 8.5 out of 10 for me.