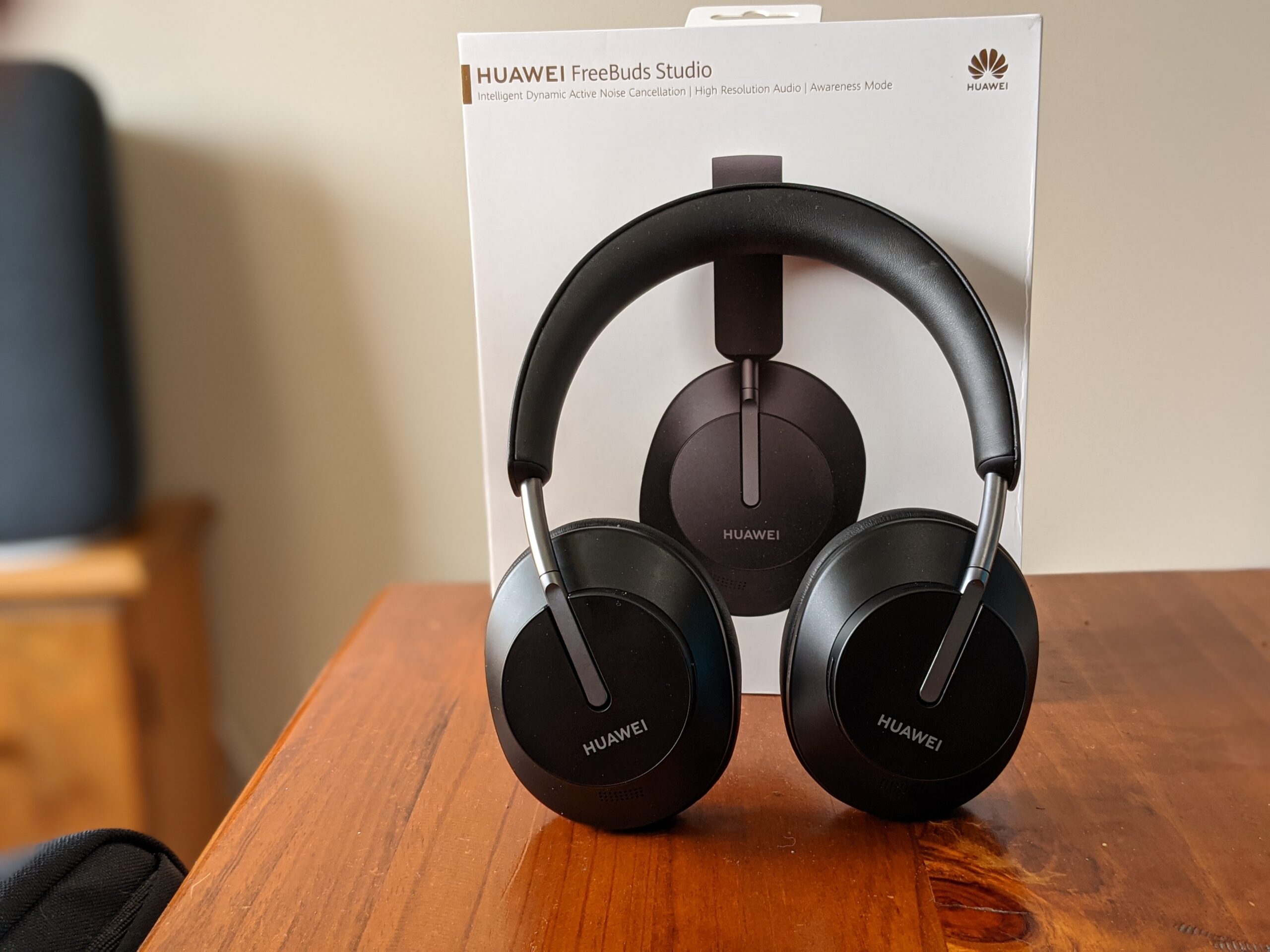 In the premium headphone category, Sony and Bose have pretty much cornered the market. Huawei however has been chipping away making a name for themselves in the Truly Wireless Stereo (TWS) earbud market, but they’ve stepped up to take on Sony and Bose with their recently announced FreeBuds Studio headphones.

Huawei has quietly built themselves a solid reputation in the audio accessory market over the past few years, so when they unveiled the FreeBuds Studio headphones back in October, I was very interested.

The Huawei FreeBuds Studio are priced at $349 putting them in the same price category as the Sony and Bose offerings, though you do find those headphones on sale a lot, often under $300, so bear that in mind.

The features offered by Huawei in the FreeBuds Studio are excellent starting with the fast pair option when you power them up,  24 hours of battery life (with no ANC), dual device support, intelligent Dynamic Active Noise Cancellation with six microphones built-in, and they come in a tidy, lightweight package.

I’ve been using the Huawei FreeBuds Studio for a few weeks now, and here’s what you need to know.

The FreeBuds Studio are fairly striking in design with a stainless steel band connecting the two ear cups, with a pleather covering over the headband and cups.

The band can be easily adjusted for people with larger or smaller heads, and the ear cups swivel to allow you to lay them flat. The swivel is the opposite to how my Sony XM3 headphones work, exposing the inner part of the ear cup when you keep them around your neck. It’s a minor annoyance, but it’s overshadowed by the lack of folding required to store the Huawei headphones in their case – we’ll get to that case in a minute.

The headphones are lightweight, even weighing in slightly heavier than both the Bose and Sony headphones, with the combination of lightweight design and comfortable padding letting you wear the FreeBuds Studio for hours without any perceptible ear fatigue.

For controls, Huawei has a combination of physical buttons (left and right) and touch/swipe gestures on the right ear cup. Out of the box the FreeBuds Studio headphones support a range of gesture controls. You can double-tap to play/pause or answer calls, swipe forward or back to skip between tracks, or up or down for volume.

You can change the touch controls – but you will need the latest Huawei AI Life app to do this and there’s some issues which I’ll get to below.

Physical controls consist of three hardware buttons: Power, Bluetooth on the right and ANC button on the left which can also activate Awareness mode or turn Noise Cancellation on or off.

The touch controls are pretty decent, though much like the Sony and Bose headphones they can be hit and miss. The physical controls are excellent, with a nice clicky feel to them. You do have to seemingly hold the power button for a very long time to turn it on, but that’s no biggie.

A note on the earcups is the easy to read Left and Right designation printed on the inner lining of the earcup. I often miss this on other headphones, so it’s something I enjoyed.

I played around with a few USB-C to 3.5mm adapters from a Pixel phone, a OnePlus phone and a Kmart $10 job – but none allowed me to connect the headphones. It’s likely the USB-C port on the headphones is for charge only, so it’s a bit disappointing.

The mobile industry has been moving away from corded headphones for sometime, but audiophiles especially still maintain that a corded connection is best. Huawei has included the L2HC High-resolution Codec for Bluetooth which Huawei the says ‘reduces loss of sound quality and restore high fidelity music’ and it works well – but there’s still a market for that cord and even though I haven’t flown for a while, when I eventually do it will be hard to enjoy inflight entertainment with these headphones..

Battery life on the FreeBuds Studio is excellent. You’ll easily see 24 hours of battery life without ANC, which Huawei advertises on their website. Using ANC though, you’ll drop down to around 16-18 hours of playback, which is quite frankly excellent.

You get a USB-C cable in the case with the FreeBuds Studio, but no charging brick. Instead you can use any of your USB chargers, or plug it into your laptop where they take around an hour to charge.

If you forget to charge your headphones you can get a quick charge, with Huawei advertising:

Excuse me as I nerd out a little over the Huawei FreeBuds Studio headphone case. Like most high-end headphone offerings, there’s a hard shell case included in the box.

The case zips up around the side, and has a textured finish on the outside with a soft material lining the inside to protect your headphones. There’s a whopping big Huawei logo on the front, but it’s nicely done and not obtrusive.

The case is fairly compact, though slightly larger than the Sony case. This is due to the headphones not needing to be folded before being stored which is a lot easier.

There’s also a neat little compartment with a door for storing your USB-C cable out of the way.

These being a $350 pair of headphones though, I’m going to throw in a few criticisms. Firstly, the bass is lacking, with the Sony WH-1000XM3/XM4 topping the sound quality in the low-end, with Bose following up a close second. Huawei tends to miss out on the tuning for Bass, though it still does a decent job overall.

I’d normally recommend checking out the Equaliser in the AI life app to attempt to remedy this, but unfortunately there isn’t one included.

Mids and Highs are fairly good on the FreeBuds Studio though, so you won’t have any issues there. Clarity of sound is also excellent whether you’re listening to audiobooks/podcasts, or jamming to music from any genre.

Huawei has done an amazing job with Active Noise Cancellation (ANC) for the FreeBuds Studio. There’s six microphones used for ANC on the headphones, four outward facing and two inner facing which reduce ambient noise from wind and other sounds to make taking and making calls on the Studio a treat.

If you’re able to use the app there’s four modes for ANC: Ultra for noise areas like public transport, General for your day to day places like cafes or restaurants, Cosy mode for when you’re in a quiet indoor space, or you can leave it on Dynamic (auto-detection). The headphones will also provide ANC for phone calls too.

Overall the ANC for the FreeBuds Studio is excellent, making for a pleasant experience. A lack of flights meant I haven’t tried them out in a plane, but they work very well for road noise in a car, so this should translate to the air once plane travel becomes more common.

If you download the AI Life app from Google Play (Version 11.0.2.305)  you won’t be able to pair your FreeBuds Studio (or FreeBuds Pro) – the version of the app on Google Play only supports up to the FreeBuds 3. Instead, you’ll need to head to the Huawei website which links to the latest APK (Version 11.0.3.315) which you’ll have to sideload (it does update itself once you give it permission).

If you’ve got the app you’ll be able to update your FreeBuds Studio with the latest firmware update – if not, well, you’re out of luck.

For Android users you can get soft-access to the option to change ANC on/off, including choosing the type of ANC: Dynamic, Cosy, General or Ultra – or switch on Awareness mode to let you hear what’s happening around you.

You can also change swipe shortcuts and also turn Wear Detection off – it’s on by default – which lets you just take your headphones off to pause your media, and play when you put them back on.

Overall, the app does offer some nice customisation options but isn’t completely necessary. Iit is slightly concerning that users without an iOS device, or who lack the nouse/ability to download and then side-load the Android app can’t update their firmware or use these additional features.

Should you buy them?

Huawei’s FreeBuds Studio headphones offer a LOT in terms of features, and they’re comparable in price to Sony and Bose’s offerings. The headphones are comfortable to wear, and also sound fantastic as well.

They are missing the option to connect your headphones to a device which is unfortunate, but completely cordless is the way the market is moving. There’s also the slightly strange app situation which limits the ability to update firmware and change settings.

As far as comfort and performance go though, the FreeBuds Studio tick all the boxes. As well the excellent Active Noise Cancellation is a shining star, and Dual Device support has become my new must-have feature for headphones.

If you are in the market for a pair of premium headphones the FreeBuds Studio can sit quite proudly alongside their competitors.

The FreeBuds Studio are available now from a range of retailers including eBay, MobileCiti, Amazon and the Huawei Experience Stores in Sydney. You’ll find prices vary around the place, so check around.