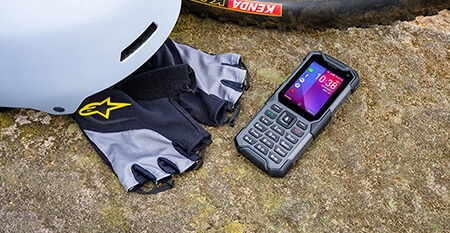 There are some people and some occupations which are not conducive to modern smartphones, as fragile as they are. These people often end up trying to find cases to protect their smartphones in the hope that the thick, rugged case will protect it from breakage. The other option is to buy a rugged phone to start with and today Aspera Mobile have announced a new, extremely affordable rugged smartphone.

The new 4G Aspera R40 incorporates nut just a rugged design but also an IP68 rating (waterproof to 1 metre for 30 minutes). It is also dustproof and purpose-built for those environments where breakages often occur. The phone itself is also reinforced for shock, vibration, water and sand.

The phone runs on KaiOS so don’t expect a huge array of available apps but it does have Google Maps, Google Assistant, Whatsapp, YouTube and Facebook, all preinstalled along with access to the KaiOS app store,.

“The first products Aspera launched in Australia in 2014 were rugged devices. Some people are still using those devices, which demonstrates the longevity of the rugged, waterproof and dustproof design. Since then, we have become known for launching quality rugged devices – the real deal when it comes to water and dust protection. The R40 shifts the game a bit as it’s deliberately designed and pre-loaded as a rugged device for mobile users who do not want or need a full smartphone experience.”

The R40 offers a simpler solution than a smartphone and if perfect for those who need the rugged features. Inside it has a 2,500mAh battery promising a 15 days standby time and a 40 hour talk time and a 2.4-inch display making it perfect for “active and outdoor types, industrial users and tradies”.

The Aspera Mobile R40 rugged phone can be purchased from Big W, Retravision and Harvey Norman across Australia for just $129. For more information head on over to the Aspera Mobile website.