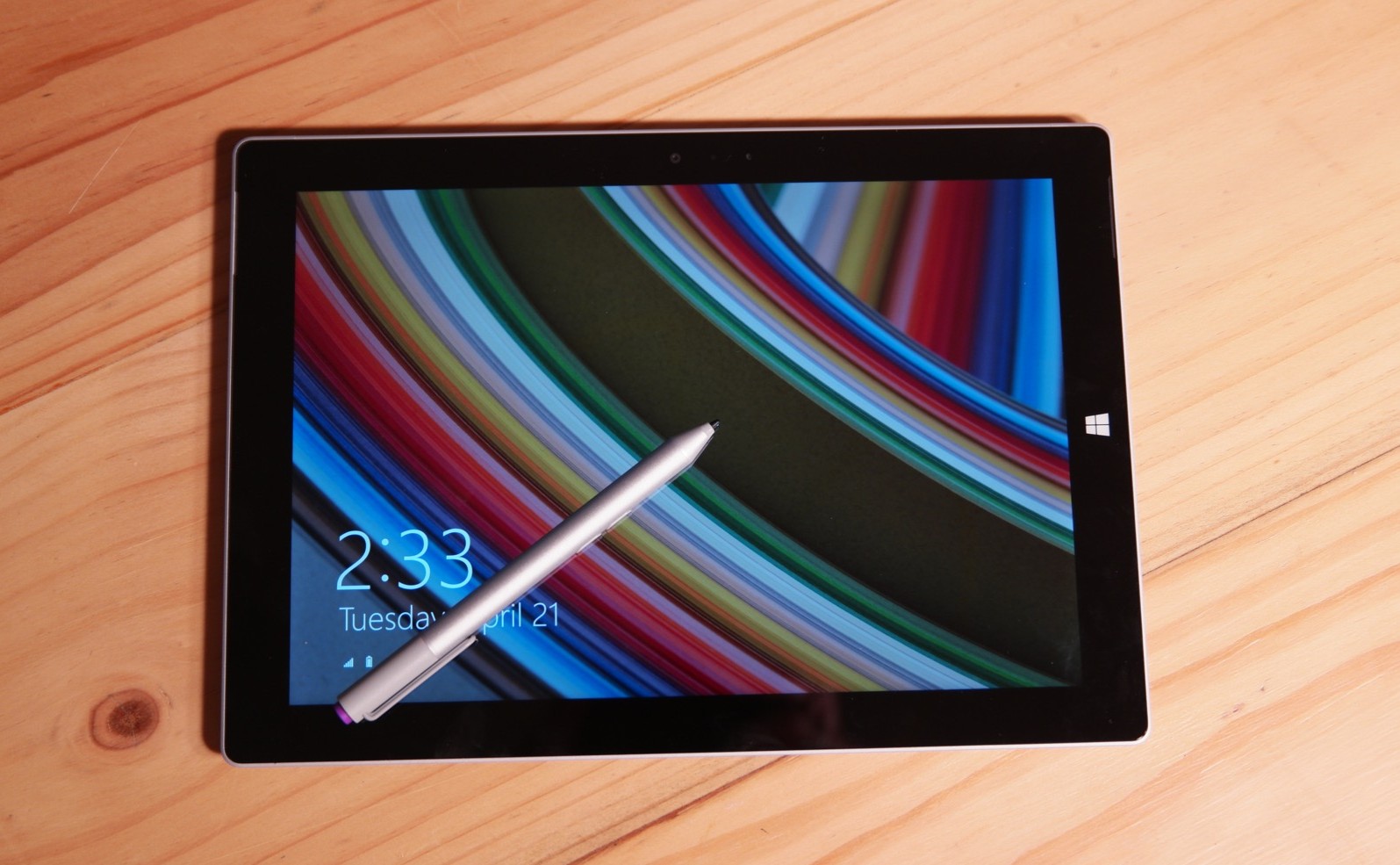 Could this be third time lucky?  Microsoft have been battling away in the Tablet market which was forged primarily by Apple over five years ago with varied levels of success.  This year, they may have hit the nail on the head with the Surface 3 – we’ve been road testing it full-time for a little while – and we’re impressed. When the Surface Pro 3 hit – it was impressive.  Unfortunately in the tablet market it was priced to lose, instead it was taking on convertibles and laptops offering a genuine tablet alternative to the laptop.

The Pro 3 was excellent, great performance, great available specs, all in all – a workhorse.  But it was pricey.  Up to $2300 or more.

So, how do you take the great parts and come down in price.

Microsoft have done it with the Surface 3.  Available to pre-order now, and shipping on May 5 – the Surface 3 starts at $699 Aussie dollars. It’s the baby brother to the Pro 3, smaller screen, thinner, and not quite as powerful.  But it’s not meant to be marketed as a laptop alternative.  This is a new choice in the tablet market – and there’s a lot of money being spent in that sub $1000 market.

Later in the year you can take a 4G option on those two spec models for $839 and $979 respectively.  That’s ultra competitive against the Apple iPad and Samsung Galaxy Tab S. So – should you get one?  Most certainly you should put it on your list.

The screen on the Surface 3 is a 10.8inch Full HD display, at 1920×1080.  Under the hood is a quad-core Intel Atom x7 – just like the new Macbook from Apple Microsoft is limiting the chip selection and focussing on RAM and storage for those looking to shop on specs.

While remarkably smaller than the Pro 3 there’s no compromise on Battery life.  10 hours with video playback, and for me, using it day-to-day, I’m charging it less than I’d expected, or normally do with my ultrabook – oh, and the best news, Microsoft is clearly checking their emails – gone is the unique charger, and in comes MicroUSB.  The same charger as most Android and Windows phones.

Running Windows 8.1 with a free upgrade to Windows 10 later in the year.

Around the sides this is a winner for port fans.  USB 3.0, Mini Display Port, MicroUSB charging port (which also acts as a USB 2.0 data port), headphone port and snap on type-cover port there’s one little port you probably can’t find.

It’s the MicroUSB port.  It’s underneath the kick-stand on the back!

This little port may present the most value of the device – hidden away, easy to throw an extra 64GB of storage onto the device and never think of it again.

Or, an easy way to grab all the content from your GoPro expedition and get straight to editing and uploading.  Very impressive.

It’s the thinnest tablet Microsoft have released, but not as thin as others – including the iPad (above) – but in reality we’re just in a contest with no real purpose to get thinner and thinner with these things.

Using the device day-to-day is a breeze – after you get used to Windows 8.1 of course.  That said, I hold high hopes for Windows 10 that could not only be the saviour of Windows, but could be the ideal selling point for this device.

Plus, you get a one-year subscription to Office 365 Personal and a bunch of OneDrive cloud storage.

The new Fresh Paint app is a great example of how a tablet like this can take full advantage of the touch interface and the Surface Pen (which is sold separately for $59.99).  Your kids will love it. I do wish the TypeCover keyboard was cheaper than $179.99 because that really adds to the price overall, and in reality, while Windows 8.1 is built for touch – the majority of things we do day-to-day on our Windows devices is best suited to a keyboard and mouse combo. If the device sells well, perhaps a Logitech or similar will do third-party keyboards, but that’s a long way off.

There is also a dock for the Surface 3 for $279.99 with four USB ports, but if you’re looking for a desktop and tablet option, the Surface Pro 3 is really your best bet.  However, for a home user this is actually a great option.

It’s hard to fault this one.  The kick-stand isn’t lie the Surface Pro 3 which can go on any angle you choose.  On the Surface 3 there are just four angles including being closed. But do you really mind that? Unlikely.

I was impressed from the moment Microsoft told me they were bringing this out at the price.

After using it in my daily life – I’m convinced Microsoft has not only listened to what the market is demanding, they’ve built a thin tablet that does almost everything tablet owners will be looking for.

Oh, and the Surface logo on the back is gone – replaced with this Windows mirror finish