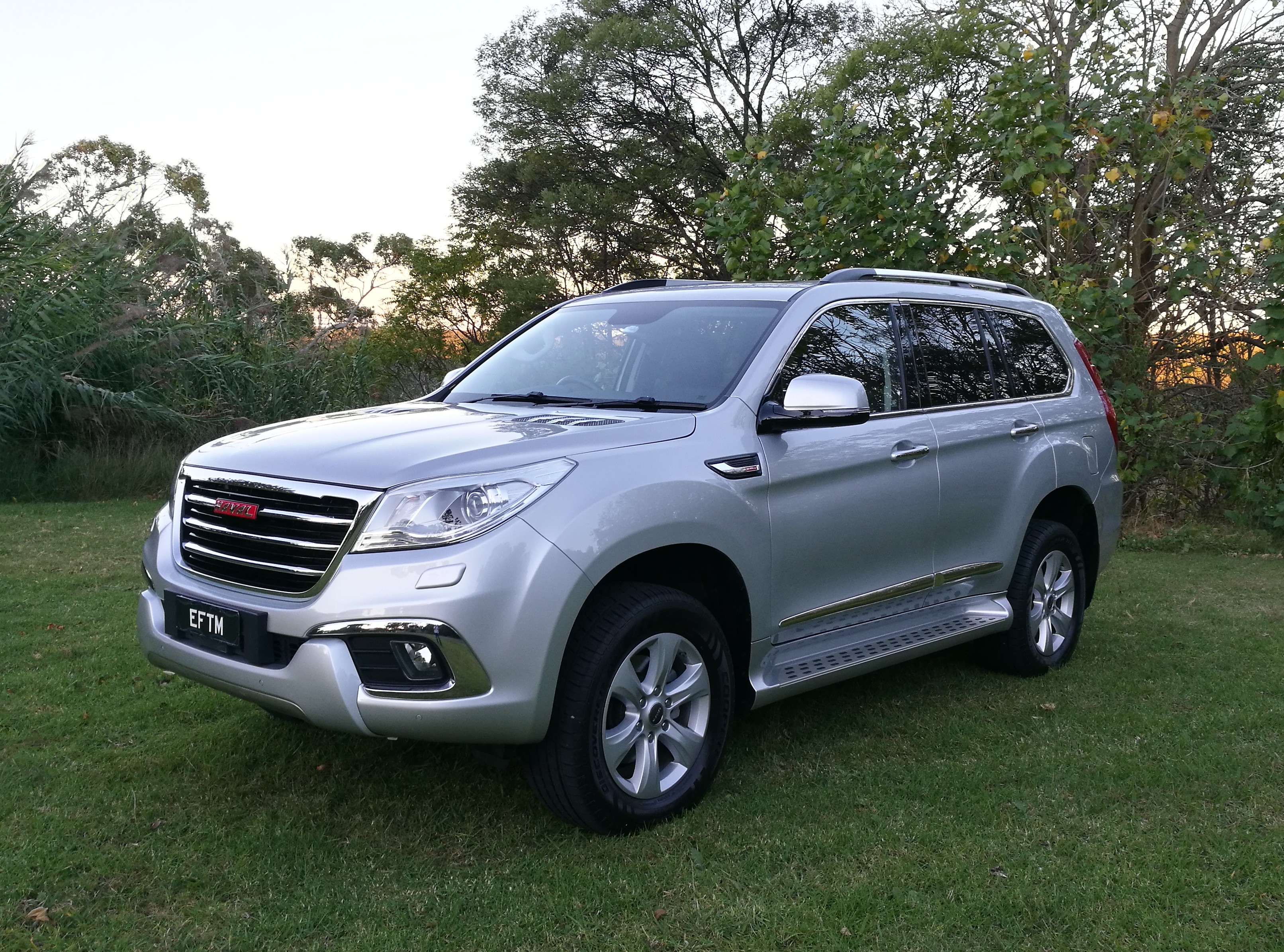 The Haval H9 – “the what?” I hear you say. Well, with just six dealers listed on their website it’s not like they’re a household name, but we’ve had a look at the biggest Haval on the market their H9 Seven-seat 4WD. 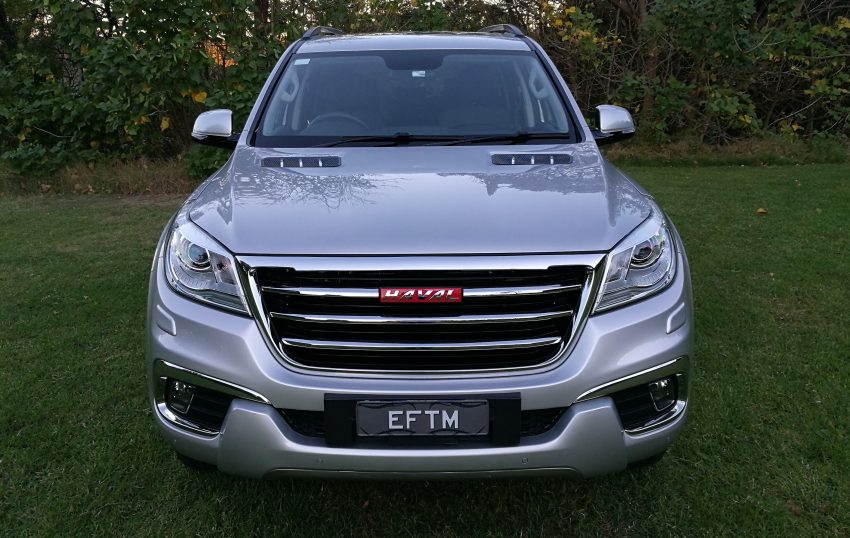 Owned and manufactured by Great Wall motors it does seem a little strange for such a young and little known brand to have a spin-off brand, but Haval is your high-end Great Wall 4WD.

First impressions are good, this thing looks good, and there’s nothing on a walk-around that would put you off – other than a lack of familiarity with the brand name itself.

Inside, the fit and finish is certainly not european style, but we’ve been testing the Luxury model with full leather trim and seemingly all the options you would want.  Though I must say it feels more like the kind of interior finish and materials, let alone the layout of a similar vehicle about 5 or so years older. 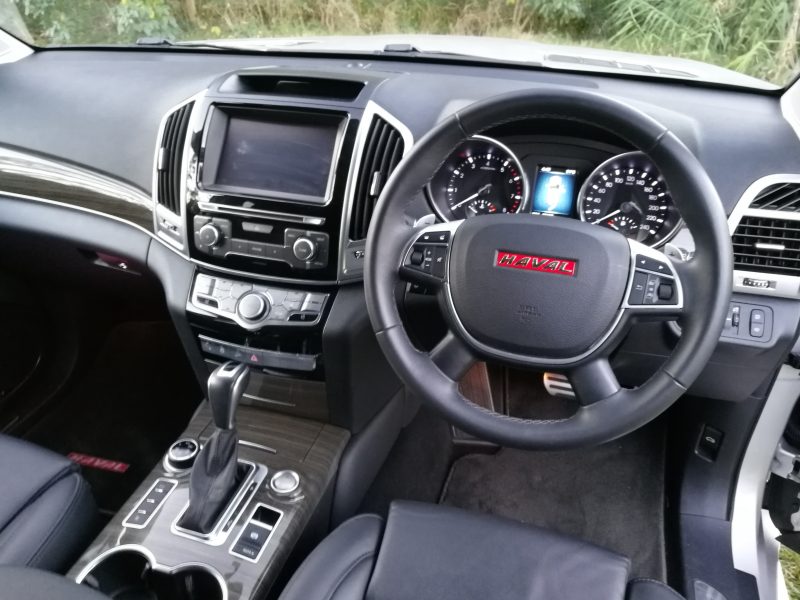 Driving around I was happy with the ride and handling, though as a big 4WD it’s got the float and movement in the wheel that’s not unusual, but it struck me that I was not adequately qualified to put this to the test.

So I called my mate Mick.  Mick and his wife Tina have three young boys, they’re a super-active family and Mick loves his mountain biking.  They currently own an older model Toyota Prado.

I wanted Mick to look at the Haval H9 and consider just how it stacks up.  The result surprised me.

In simple terms, here’s his summary “The 2015 Haval H9 LUX is no world beater. And it certainly is not a something you’d take too far off the beaten track. It is however, a surprisingly good option for the city-based SUV owner.”

Not much more to say really. 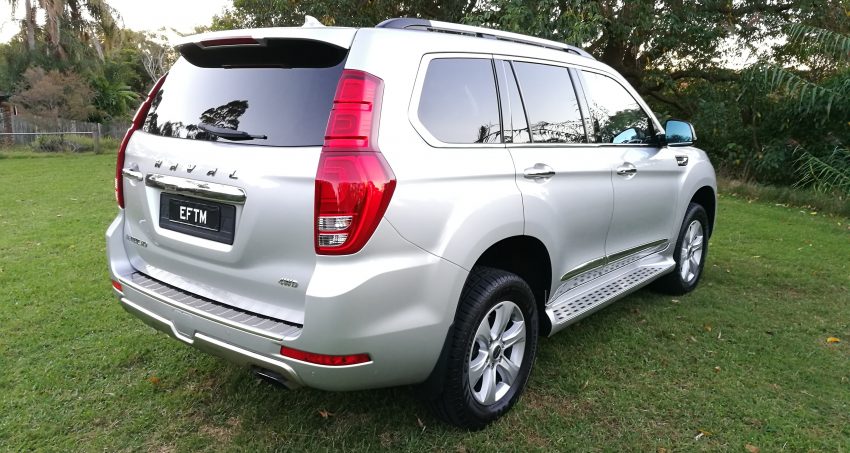 I never expected this would battle the best 4WD’s in the country for off-road ability.  It has all the trimmings, with hill decent control and 4WD modes, but let’s be honest, if you’re a genuine 4WDer then you’re looking at a whole host of other vehicles.

Then there’s the dealer network, with just six listed, you’re not going to have the accessible service that puts Toyota at the top of the list for many who want to know they’ve got support no matter where they are.

But – what about the city folk, the soccer mums, the large families who are choosing these big 4WD’s for the space for luggage and seating.  Well, seemingly, that’s where the H9 hits the spot. 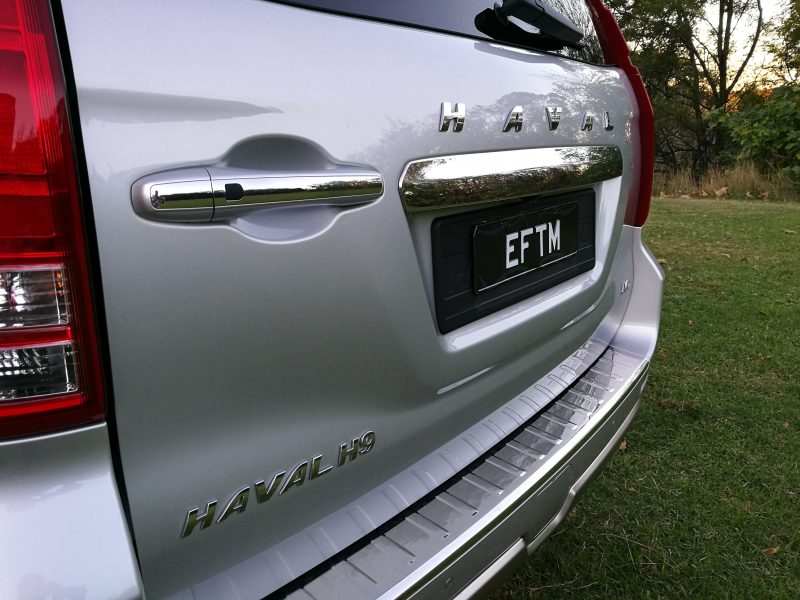 The Haval Luxury – $50,990.  As a family trying to save money this puts the Haval right in contention for consideration.

Given Mick knows his Prado very well, across his weekend in the Haval H9 was able to put together a solid list of the Good and the Bad.

Dual remote adjuster buttons for the front passenger seat. One down the left hand side of the seat and the other on the right hand side half way up the back rest. On first thought I thought this would be a great way for one for the kids to annoy a parent or sibling by playing it when I was dozing off in the passenger seat, but when I found myself in the back seat wanting a bit more legroom with no one in the front (hey – these things have to be tested!), I realised how great this feature was. Being able to move the seat forward from the rear seats is actually quite convenient.

The smaller steering wheel (compared to our 120 series Prado Grande) makes the vehicle feel a lot smaller and has a much nicer feel than normal larger 4WD steering wheels. It also has a surprisingly tight turning circle for such a large vehicle. For a mother driving the kids around and doing the shopping this is a more comfortable drive than our Prado. 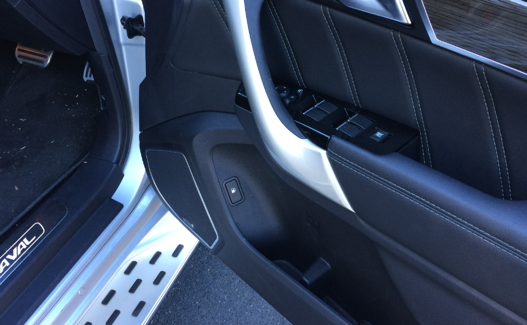 The location of the fuel opening button in the door was a hit with the wife.

When you put your foot down, these is a lag of about one second before the engine responds. Once the vehicle starts accelerating though it doesn’t miss a beat. The gear changes are smooth and the vehicle continues to accelerate all the way through each gear change up to 110 km/h.

Overall it’s a really comfortable ride. The zones on the climate control meant everyone was happy with the temperature in the vehicle, and the massage and other features in the front meant Mum and Dad were comfortable.   It actually drives more like a large diesel sedan, rather than a similarly sized SUV.

The middle row comes with ISO FIX attachment points for both the left and right hand seats.

Other nice touches include:

Slow responsiveness. It takes over a second for the engine to truly kick in after putting your foot flat to the floor. At one point, when I need to accelerate quickly, this lag almost added a few grey hairs whilst I waited for the engine to respond. However, to be fair, I think this would just take some getting used to.

The third row seats are raised up and down via a push button at the rear of the vehicle. Why however, I have to sit there and hold it in for twenty seconds seems unnecessary. I can’t image ever wanting to raise the seats half way, so why not have the button just a set and forget?

The rear view mirror has some smarts built-in that automatically dims if someone is driving with bright lights or high beams behind you. However, the trade-off it seems, is a smaller, darker rear vision mirror making visibility out the back less than ideal. 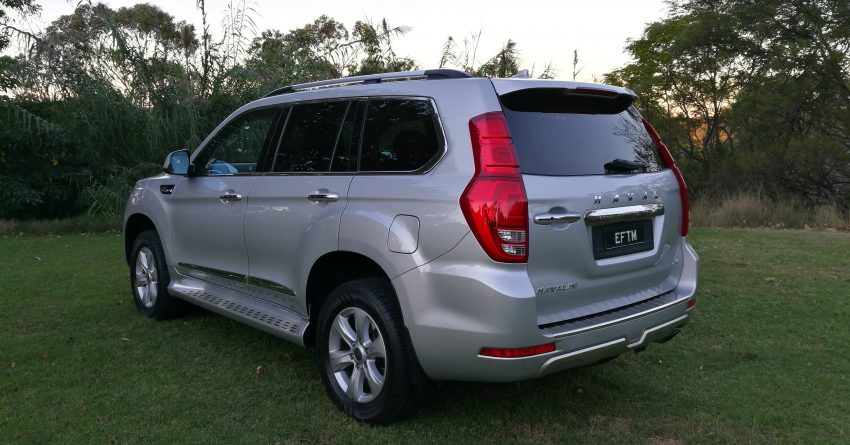 Couldn’t pair my Bluetooth phone whilst the vehicle was moving, even though I was a passenger at the time.  Why can’t it detect that someone is sitting in the passenger seat and turn all these “big brother” safety features off?

The vehicle beeps whenever I set cruise control or adjusted the speed of the cruise control was annoying. Not sure if this is something that could be turned off but there should be. As someone who loves cruise control, this very quickly became annoying.

The computer generated voice on the navigation system sounded like a voice out of one of my nightmares. The voice seemed to have been created as a parody of some miserable character out of a cartoon character. It was funny at first, but the voice was so miserable that it actually started to disturb me, and I had to disable it to avoid sliding into some form of depression. Yes, it is that bad!

Whilst sitting in the middle seats, I was able to set my own temperature settings which was a great touch. Although I did notice the LCD display had already started to malfunction. The vehicle I had was a 2015 model that had down 10000kms.

I’m not sure if the software built-in to the car can get an update, but it desperately needs one. Has anyone ever performed a firmware update on a car?  The Bluetooth software simply does not work, or at least, not for me. Once I had established a Bluetooth connection with my phone, the software made a number of phone calls and would initiate these seemingly at random. In fact, a lot of the software in the vehicle appeared to be version 1.0 at best and would be the single reason why I would not recommend this vehicle to someone wanting a 7 seater SUV. Although to be fair, they may have already resolved these with the 2016 model. 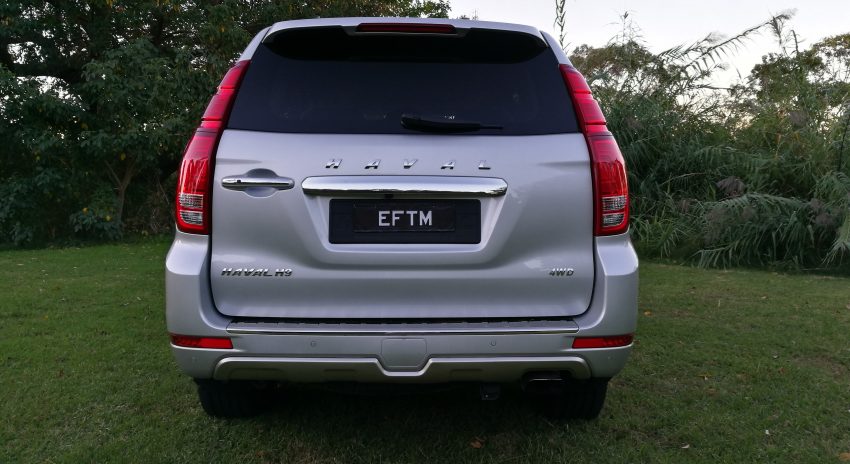 When driving the vehicle, you don’t have a sense of the front of the vehicle, due to the bonnet design. However, this is offset by parking sensors around the vehicle (front, rear and side) giving you a proximity indicator of how close you are to obstacles. This all worked reliably well. Putting the vehicle into parking mode could be initiated either by putting the vehicle into reverse, or hitting a button on the dashboard. Once you hit a certain speed travelling forwards, the rear camera and sensors would then deactivate.

Disappointingly, the Cruise control is very basic. It offers the simple accelerate, decelerate, set features. Given the number of features and mod-cons this vehicle has, I was surprised it didn’t have the ability to lock onto the vehicle in front and maintain speed and distance.   Definitely an opportunity to improve this feature in newer models. And the beeping!! Everyone in the vehicle doesn’t need to know when I set, accelerate or decelerate using cruise control. Please Haval – turn the beeping off! 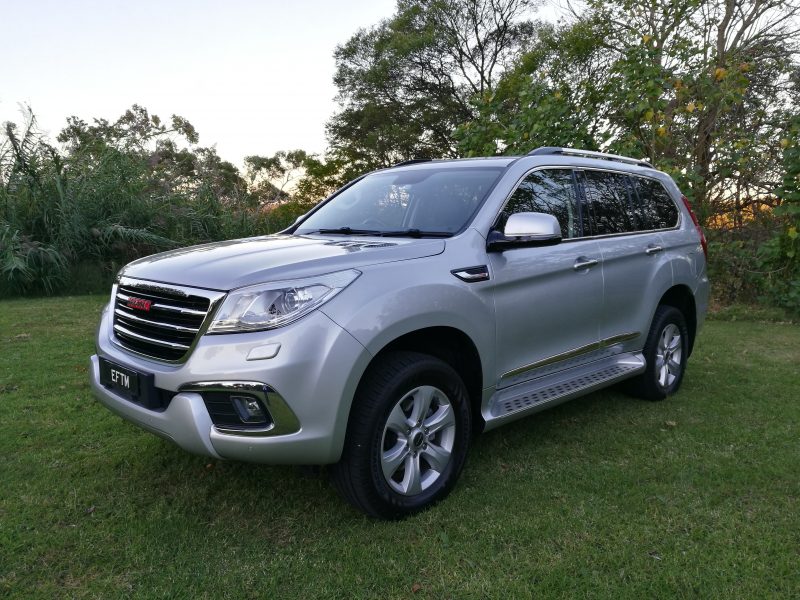 Another feature missing was DAB or an ability to record any audio in the vehicle or from the radio. Whilst the audio system feature rich, the quality was only average and lacked anything other than the basics. For a luxury car, I think this was a missed opportunity.

When sitting in the passenger seat, you are unable to see what speedometer due to it being set back on the dashboard. Not a major issue, but just an interesting observation.

The seat massage feature is something that was fun to play with, but I wasn’t a fan. The heated or ventilation options for the seats were much more relevant to me and both were used and appreciated.

It’s not a 4WD, more like a luxurious people mover. A great competitor to passenger vans and priced well enough for those wanting a bit of luxury with their driving without breaking the bank.

When you lock the vehicle, the side mirrors automatically turn in, reducing the chances of them getting hit by passing vehicles etc. This is a clever feature until you realise it acts as a beacon to tell people whether your vehicle is locked or not. The vehicle may automatically lock after some time of inactivity, but I’m not sure I’d want to advertise to others whether the vehicle was locked or unlocked whilst parked even temporarily. 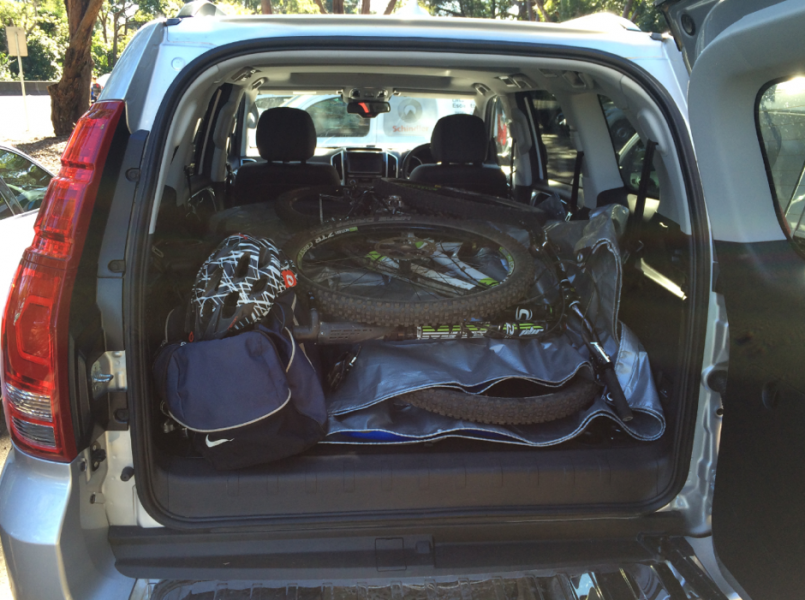 We had no problems fitting two mountain bikes in the back without the loss of any visibility too. Most vehicles would really struggle fitting a third bike. The H9 would do that easily. 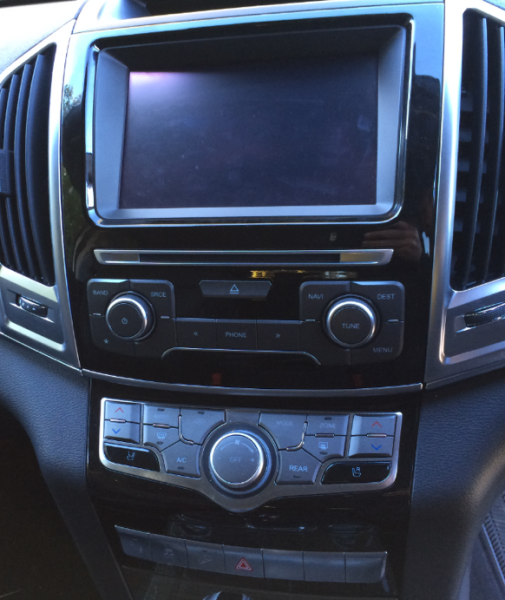 The centre console was starting to look like mission control. With that many buttons, it is not intuitive and would take some time to really start to use all the features effectively. 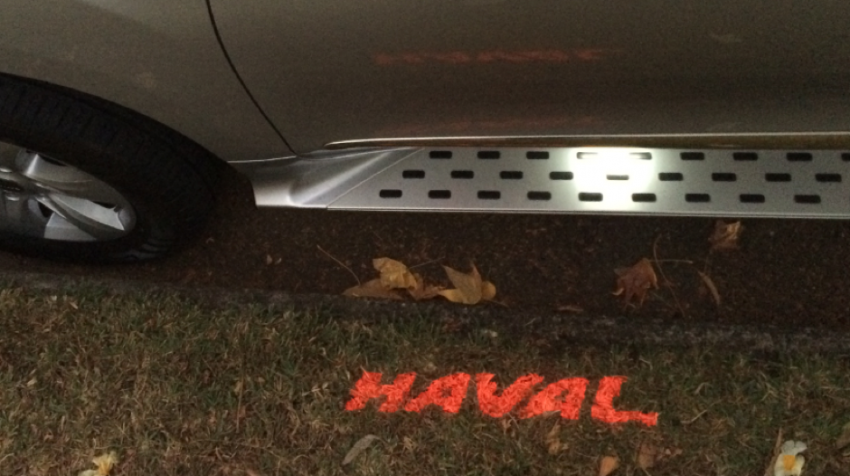 A nice touch with a laser light showing the vehicle on the road/footpath when you unlock the vehicle. Looks better at night. The foot rest is also lit up with lighting so you know where to step as you climb in.

For any prospective owner, I think you’ve just heard the lot – and that, plus a solid test-drive for yourself should help you make up your own mind!