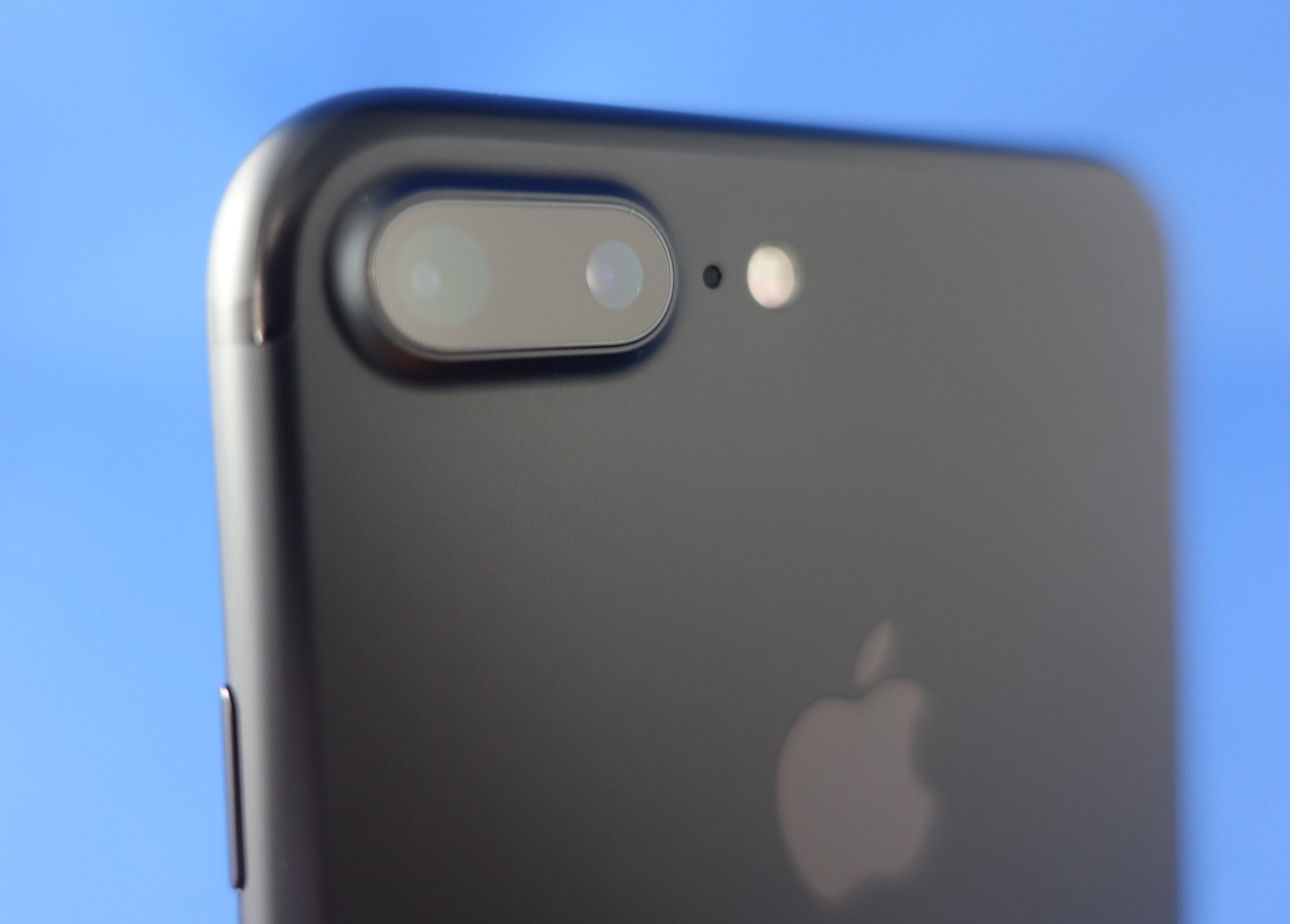 It’s been a couple of weeks since the iPhone 7 Plus was announced, and a week or so now since it went on sale.  This time unlike every other year there is less urgency from people to get a look at it, and more questions along the lines of “should I get one”, so let’s have a think and a good look. 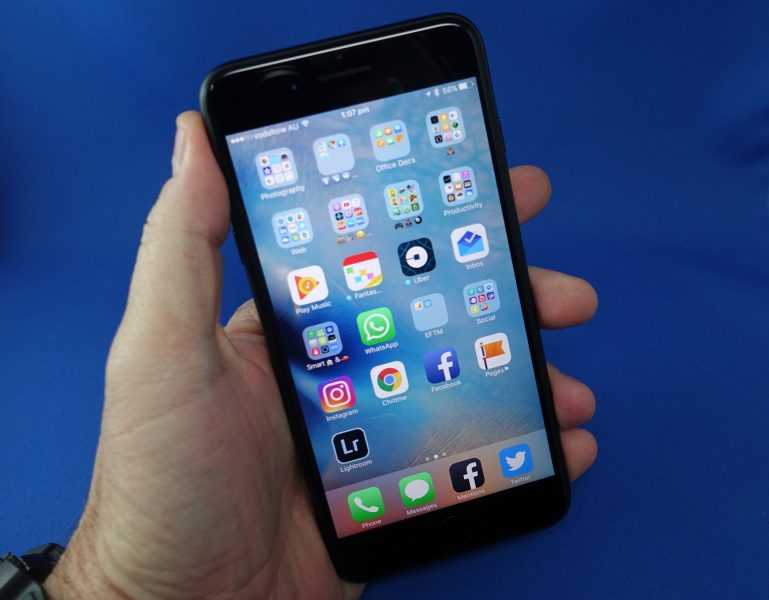 So, assuming you are a fan of the larger sized devices and in particular those that already own a device this size there’s a lot to love about the iPhone 7 Plus.

But there’s also the question of if, when and should you upgrade.

No, the iPhone 7 Plus isn’t remarkably different to the iPhone 6 Plus or 6s Plus in terms of general look, size and feel.

Though the Jet Black (shiny!) version is stunning, and the gloss finish has an added friction to it which more than any other iPhone makes it feel steady in the hand, the Black (matt black) version is the real standout here.

No fingerprint issues with a gloss finish, and a new colour so people know you’ve got the latest. 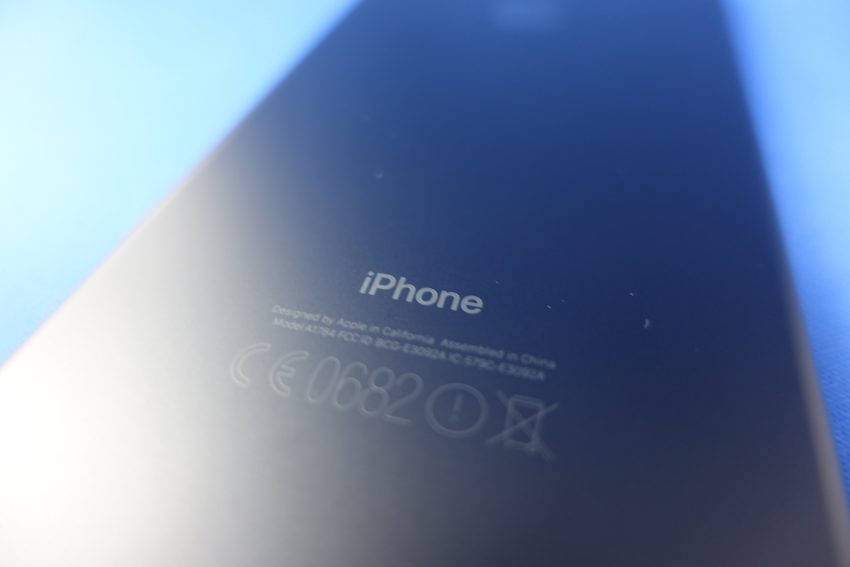 Let’s face it, that’s half the thing about having the latest phone – letting people know either directly or by subtly placing it in front of them that you’ve got something they don’t.

Apple say this black is a colour Jony Ive and his team have been striving to create for years.  The Anodised aluminium when coloured this way has been patchy and not perfect, until now.  A smooth, consistent colour all over.

If you are going an iPhone 7 Plus, go black.  Simple as that.

Physically there are two key differences

No headphone jack, and the home button is very strange – and new.

The headphone jack is gone – RIP – but it’s replaced by something that has existed for some time, bluetooth audio, or a lightning connection.  If you’re bummed out by this, stick with your current phone.  But mark my words, in a year or so no-one will remember this drama.

Replacing the home button with a touch sensitive plate is a radical move.  That button has been there since the get-go.  When the phone is off – powered down that is – it’s strange as heck.  There is no button, if not for the fingerprint activation ring around it, you wouldn’t know it was there.  No movement at all.  Nothing mechanical. 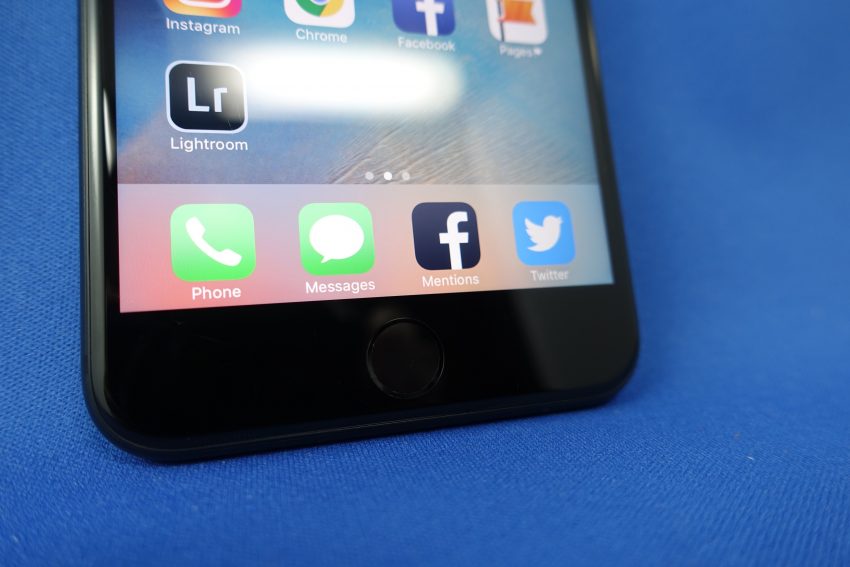 This helps create a water-resistant phone, but also removes some mechanical bits and bobs that take up space inside and make way for Apple’s Taptic engine which fakes the feeling of the home button.  Not exactly, but after a week you won’t remember the difference.

Having the Taptic engine allows some more “feelings” to be sprinkled around the software.  Clicking through the numbers on the alarm clock or timer, clicking through the letters on the side of your long contacts list – all register a slight feeling and it’s a tactile thing that really works.

You get used to the home button – trust me, and my only issue now is double tap multitasking window – seems to give me grief now and then, sometimes works sometimes goes home.  I’m sure it’s me that’s at fault:)

This is where Apple have the biggest challenge.  The good stuff is never seen, only spoken about at the keynote.

More battery, much more powerful processor, new screen technology for a wider colour range and efficiencies even on the processor to give better battery life and usability.

Without these under the hood enhancements, and even leaving aside the camera or design innovations, Apple would fall behind.

What this phone is capable of just because of the processor and graphics improvement is mindblowing – I mean, F1 2016 the game – on iPhone.  Sign me up!!

This is where the juicy stuff sits. A dual-lens camera. 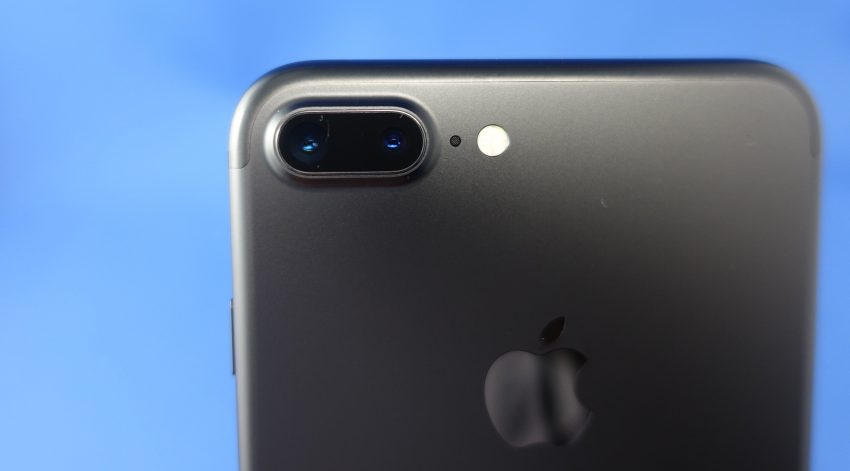 Not innovative generally. LG had some serious smarts at MWC with the G5, and Huawei’s Leica dual-lense P9 is sensational.

What Apple has done is a bit of a mix of both.

Using two lenses and two processors, they are able to firstly provide a 2x optical zoom.  That’s a big deal straight up, so many people zoom in photos and fail to realise there’s really no need or benefit. 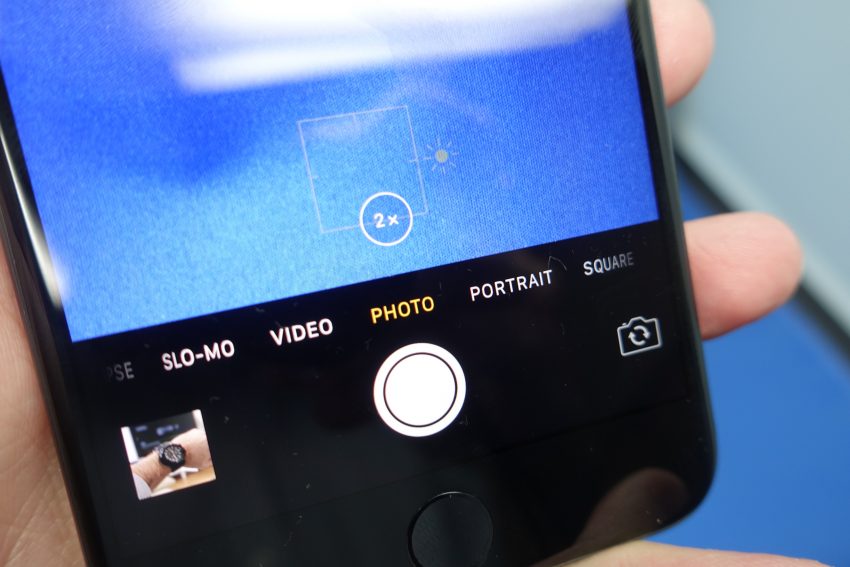 With the tap of a 2x button you’ve got a two times optical zoom.

Combined with processor power, both lenses can work together for an enhanced zoom up to 10x.

With two sensors there are also some smart processing features going on to enhance photos and videos.  The most important is Portrait Mode.

Not shipping with the device, but to be introduced via a software upgrade to iOS 10.1 later this year, this mode is pure magic.

With a high-end DSLR camera with a great lens, you can take a portrait photo and have this lovely blurred background and sharp face of the subject. 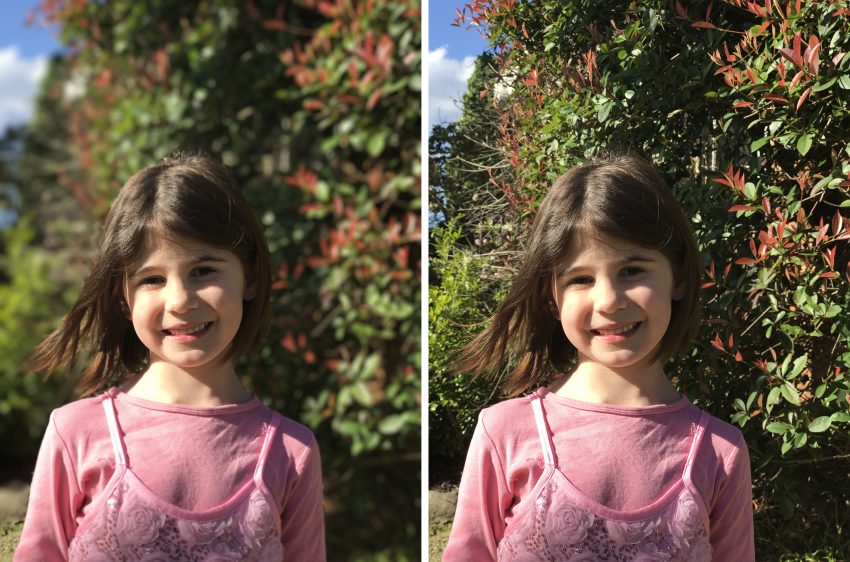 Portrait Mode in iOS camera does this with software.  It’s not yet perfect (It’s still in Beta testing) – but man, it’s impressive. 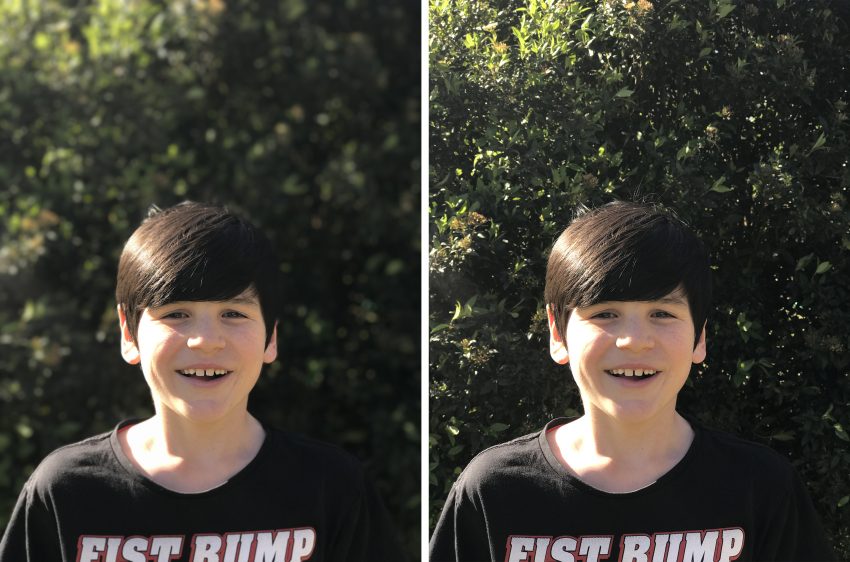 Some how it finds the outline of the object it’s looking at, and blurs around it.  In some cases you can see where it goes wrong, but I’m not shooting for a “Shot on iPhone” billboard here, it’s Instagram folks, and this is going to be amazing. 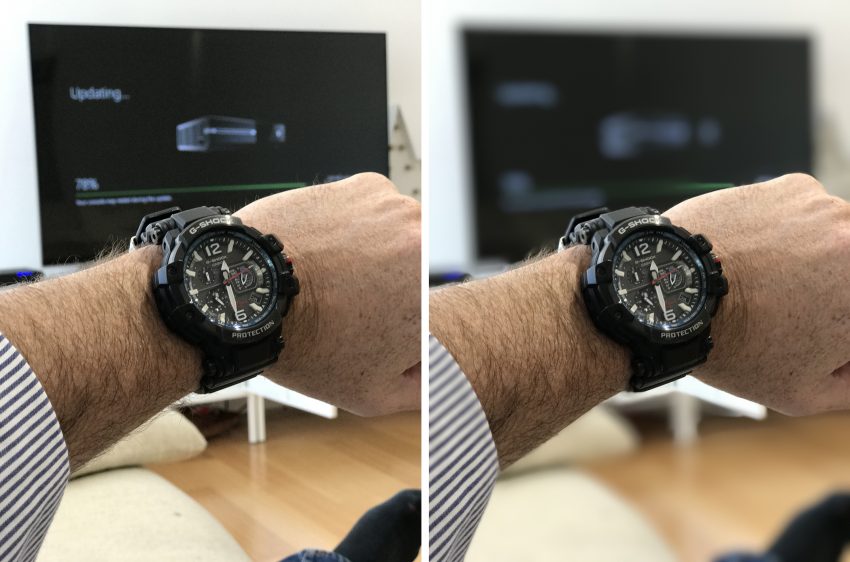 Even works with other objects in front of it, not just “people” and Apple say it intelligently continues to learn.

That update will come to all iPhone 7 Plus users later this year.

If you have an iPhone 6s Plus, no. iPhone 6 Plus, if you’re good with cash, or happy on a contract then sure!

But in reality, while Apple wouldn’t love it – three years is a great phone replacement cycle.  No matter what you’re always going to be a year out of the best of the best, two years really won’t hurt you. 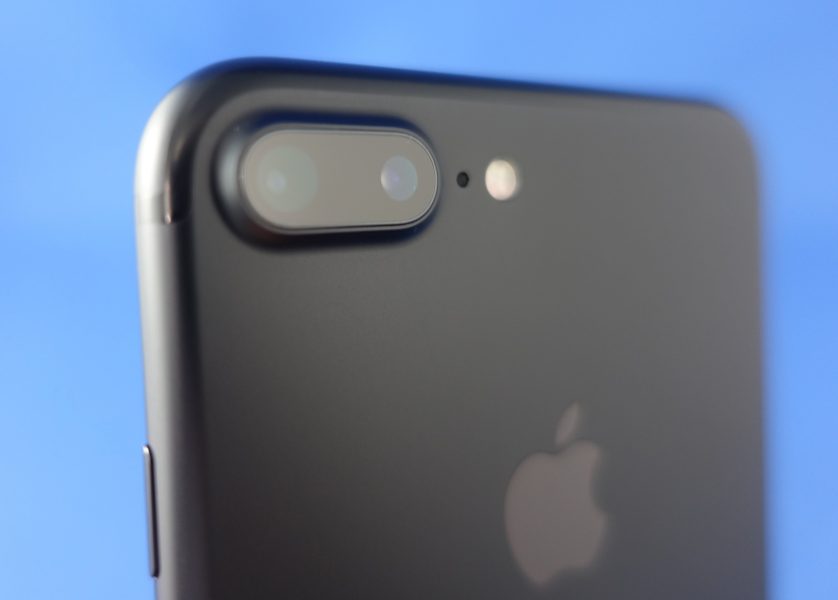 This is the best iPhone Apple’s made and without question, and the camera is sensational.  The real question is how keen you are to pay the price (Starts at $1,269).