Ford Mustang GT: What it’s like to live with America’s classic muscle car

I’ve been fortunate enough to drive many blisteringly fast, exotic vehicles in my time writing about cars. Everything from Lamborghinis to Nissan GT-Rs and Audi R8s, but none of them have ever garnered as much attention as the red Ford Mustang GT that’s currently sitting in my driveway.

Kids pull out their phones to take pictures, men who have lusted for a Mustang their entire life stop and stare until you’re no longer in their vision. The Ford Mustang is not just a car, it’s a cult figure.

I’ve had the Ford for a couple of weeks now, as our latest long term loaner at EFTM, picking it up with just over 280kms, and have since driven it to Bathurst and back twice and along some of Sydney’s better back roads, as well as my day to day.

We’ll have the car until December, and I’ll be exploring what it’s like to live with such an iconic car. I’ll of course be taking a look at the obvious things such as how it drives, what it’s like inside and how expensive it is to run. But Mustang buyers purchase their car for so much more than that, which is why I’ll be embedding myself into a couple of Mustang club meets, I’ll be chatting to other owners and tuning shops and seeing just what it means to own a Mustang.

My drive up to Mount Panorama from Sydney last weekend for the Bathurst 1000 was my first real stretch of the Pony’s legs. For those who know the Bathurst area, I took it through the roads that lead to Tarana, which is a much more exciting and picturesque way to get from Lithgow to Bathurst than your standard highway.

The Mustang GT is fast. Really fast. Plant the foot and you’ll be into licence losing territory in a matter of seconds. But with the nice long, swooping corners in these back roads, and a healthy 110km/h speed limit, you were certainly able to push the Mustang to its cornering limits, which were surprisingly strong.

I had recently driven a Toyota 86, which is probably the best handling car this side of a Porsche Cayman, around these same roads, and the Mustang, while not as stiff or quick to turn in as the 86, felt closer to its abilities than a car its size should be able to.

As I come into Bathurst, with all 200,000 race pilgrims – half bleeding blue – I feel all eyes on the Mustang. Guys with cans of Tooheys New in one hand are signalling at me to do a burnout with their other hand, while a stern looking highway patrol officer leaning on his XR6 Turbo cruiser stares at me shaking his head in response. Damn.

On my way back from Bathurst, I was giving a lift to two of my colleagues, which meant one of them had to sit in the back of the 2+2 Mustang. Lucky for her, she’s quite little, and while it wasn’t a Rolls Royce experience, she actually managed the whole 3 hour trip without too much discomfort. You can’t often say this about coupes this size, although I’m sure anyone bigger might not have had as great an experience.

While my time so far has mostly been excellent with the Mustang, there are still a few little things that have started to annoy me as my time continues on. The biggest one is definitely the lack of exhaust note – it’s seriously pathetic for a V8 muscle car, which you expect to sing gloriously. I was driving next to a Volkswagen Golf GTI, with its tiny 2.0-litre turbo which sounded better.

Not surprisingly then, another Mustang owner I spoke to up at Mount Panorama had upgraded his exhaust to one of the Borla systems. We went for a quick drive together on some roads outside of Bathurst and his car sounded fantastic, infinitely better than the stock exhaust.

The interior quality is also on the average side. There’s cheap plastics everywhere, and I’ve started to notice this little annoying rattle that comes and goes on the passenger side of the car. It’s not a deal breaker, just a little disappointing.

But so far I’ve enjoyed my time with the Mustang GT and am keen to see how the next couple of months with it turn out. 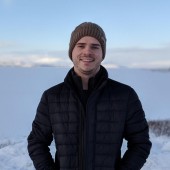 Harry loves cars... and tech... Previously, he has written about cars for News.com.au, Business Insider and GQ. After growing up with petrol running through his veins in Bathurst, Harry one day hopes to own Godzilla - the true king of the mountain.