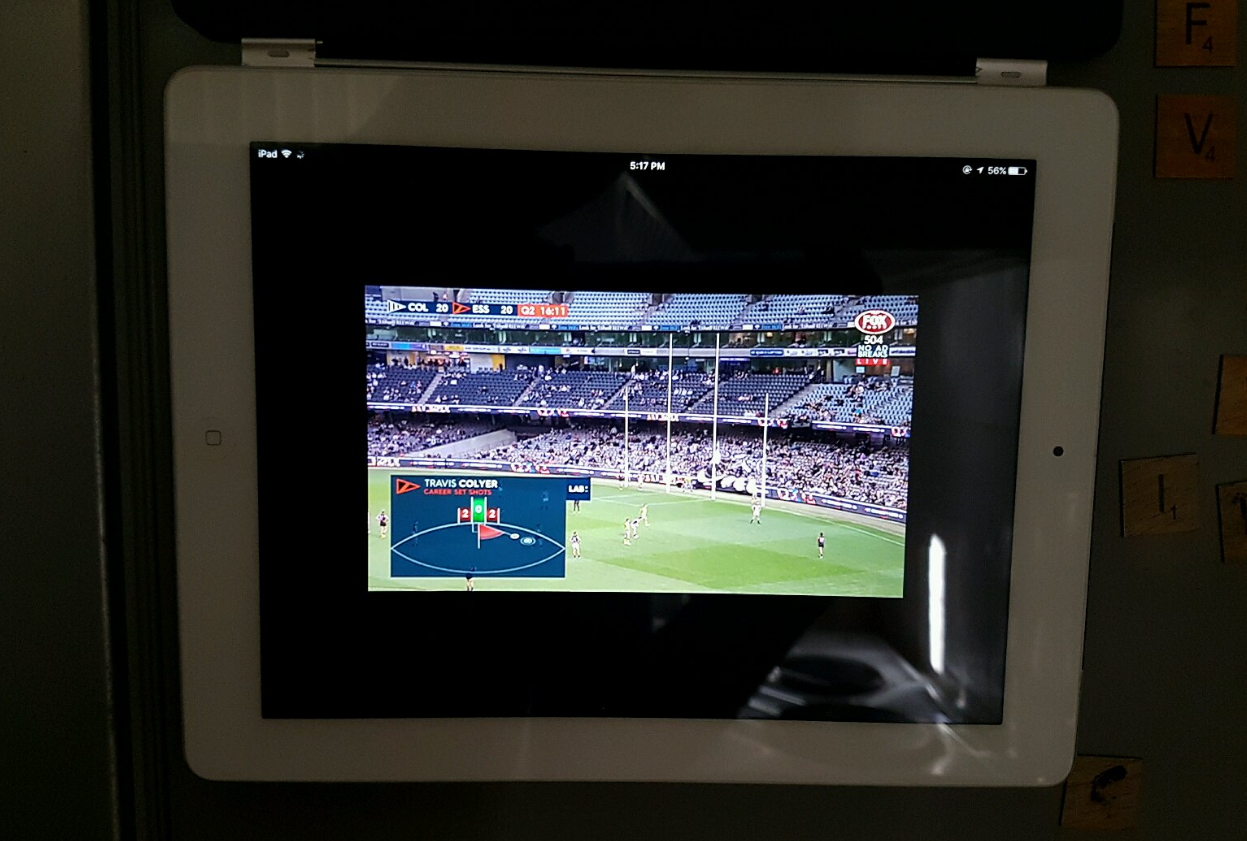 The season proper isn’t underway yet but AFL fans have tonight got their first glimpse at the new AFL streaming service available via Telstra and they’re not happy – not happy at all.

2017 sees the start of a whole new broadcast rights deal for the AFL and while the partners remain the same with Seven, Fox Sports and Telstra sharing free-to-air, subscription and digital streaming rights among them, the devil it seems is in the detail.

Tonight, as fans switched on their iPad to watch the JLT Community Series pre-season event, they were a bit perplexed. 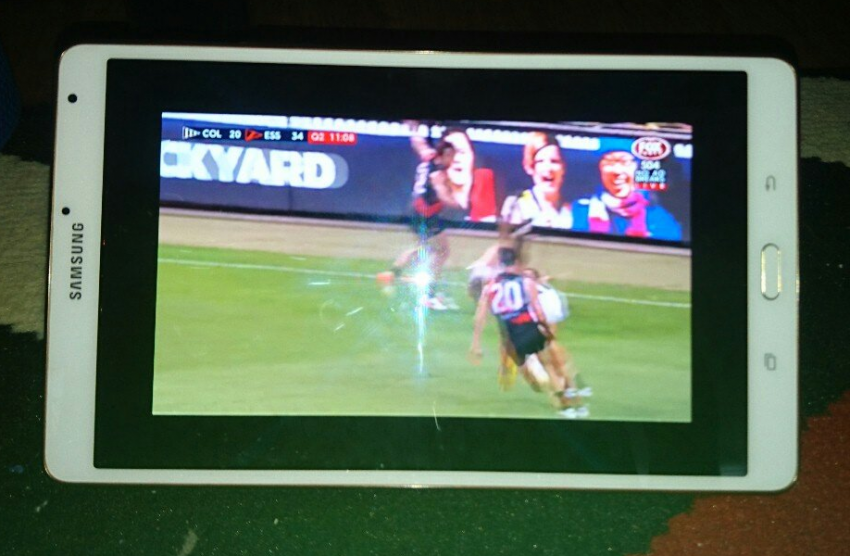 Watching on an iPad the picture was not quite right.

Instead of taking up the whole screen, you’re presented with a black border all around the broadcast.

Why? Well – the AFL have made that clear in their response on social media:

@smgray66 In 2017 live streaming picture size on Tablet will be shown at iPhone size due to new Broadcast Agreement. New features to come.

Fans think, or thought there was a technical issue, however this confirmation from the AFL shows that in fact this is how it’s meant to be. 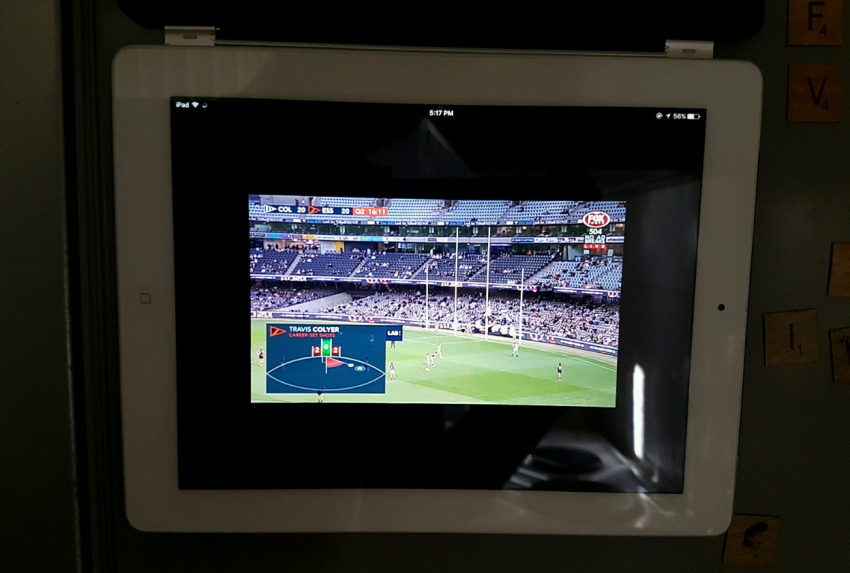 Yep – while some new features might include Bloomberg like stats and data around the main game, it will never be full size on tablet devices.

Further detail appears on Telstra’s support forums where users are told “Live streams are restricted to max screen size of 7” diagonally. This is as per Telstra digital rights agreement with AFL. Match replays are available for viewing in full screen size.”

If you want to know if you should have been aware of this before you saw your first broadcast – of course! It’s in the terms and conditions (which no-one on this planet would have read) 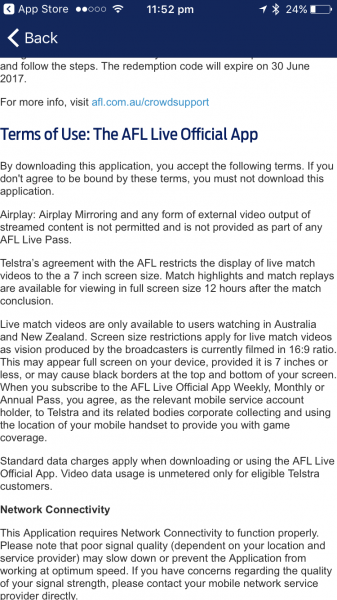 Airplay: Airplay Mirroring and any form of external video output of streamed content is not permitted and is not provided as part of any AFL Live Pass.

Telstra’s agreement with the AFL restricts the display of live match videos to the a 7 inch screen size. Match highlights and match replays are available for viewing in full screen size 12 hours after the match conclusion.

Live match videos are only available to users watching in Australia and New Zealand. Screen size restrictions apply for live match videos as vision produced by the broadcasters is currently filmed in 16:9 ratio. This may appear full screen on your device, provided it is 7 inches or less, or may cause black borders at the top and bottom of your screen. 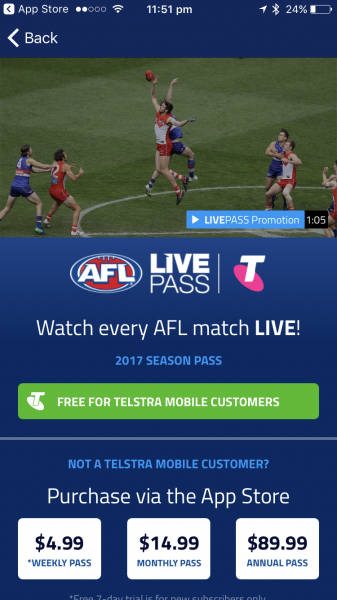 Those are easy accessible by scrolling down several pages on the BUY NOW page then almost three quarters of the way through the actual fine-print terms and conditions. 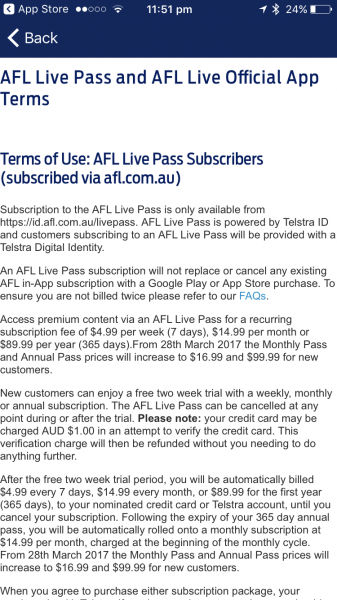 Bet your bottom dollar Foxtel and Channel 7 added that line to the broadcast deal, to limit further what fans can do with the Telstra $90 annual pass (Free for Telstra customers).

This is all about defining mobile vs TV and making sure that mobile viewers can’t “cast” or “AirPlay” their picture onto a big screen.

Using the iPad to point at your iPhone and Airplay mirroring the screen. Smart:)

Fans are demanding refunds on their annual subscriptions – no-one was told about this little detail before signing up.

@smgray66 @AFL yeah bloody disgusting, I wouldn’t have signed up to watch on iPad if I’d been informed it was mini-vision #Disgraceful

@AFL @smgray66 you negotiated a new broadcast agreement and reduced the quality of your digital offering? Need new negotiators

@AFL @smgray66 was anyone informed of this before purchasing your half assed coverage?

@AFL Subscription. Cancelled. What a deceitful move. This is going to damage your brand immensely.

@AFL @smgray66 Its 2017 not 1967 you inept clowns at the AFL. How you can rationally think this is acceptable outcome is beyond astonishing

@AFL @Telstra I have several months to run on my 2016 #AFL Live yearly subscription and this is NOT the service that I paid for. Refunds?

Will be interesting to see if and how the AFL, Telstra and other broadcast partners react to this.