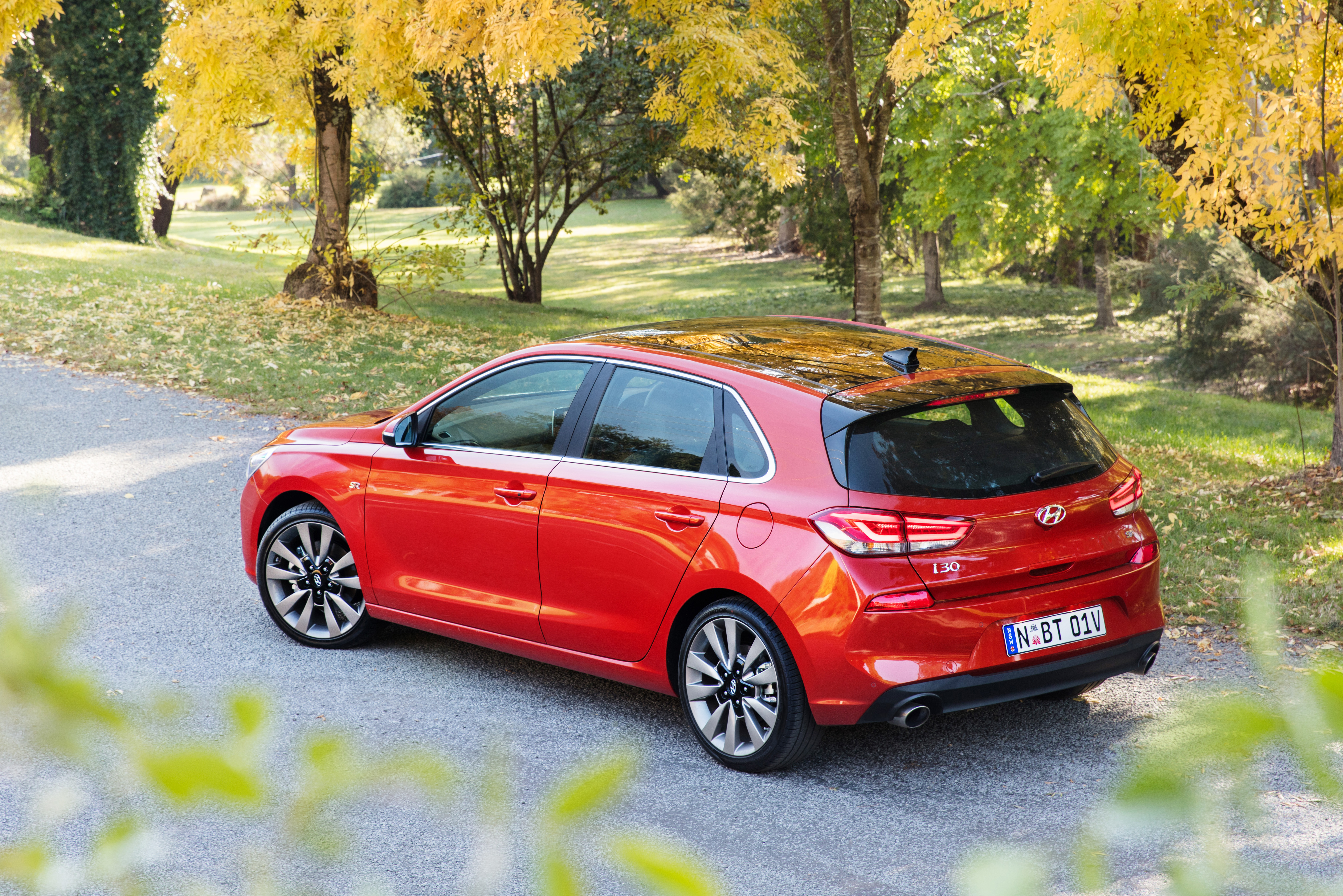 The third-generation i30 has arrived, with three engine choices, 5 variants and inevitable technology upgrades on some models. After selling 37,000 in 2016 the good people at Hyundai will be sweating on the new arrival that accounts for basically a third of its sales. On the Australian local launch south of Albury, Chris Bowen discovered the i30 is now also a decent sort with an interior that rivals class leader Mazda. 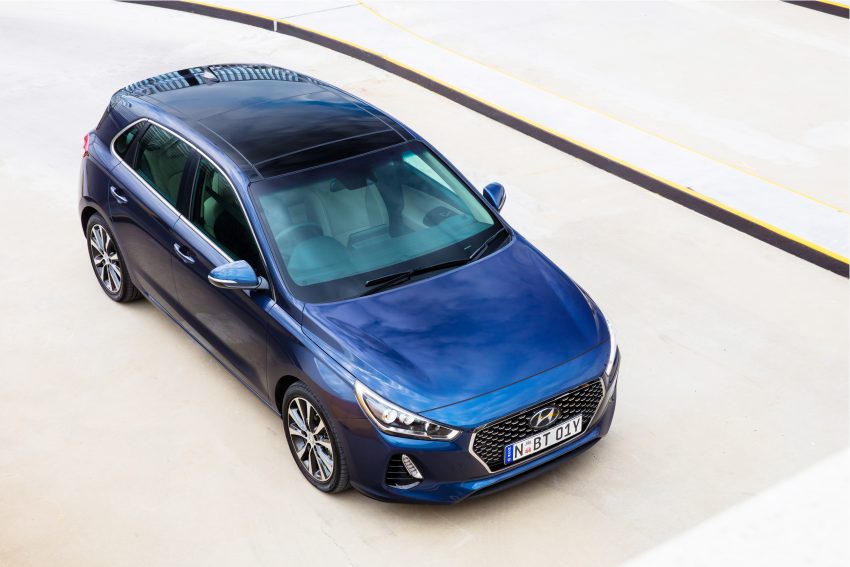 The familiar Active, Elite, Premium, SR and SR Premium variants are still featured. Engine and transmissions include the Active’s standard 120kW/203Nm 2.0-litre GDi petrol four-cylinder with the choice of a six-speed manual or six-speed automatic. The diesel option for the Active, Elite and Premium models is a 1.6-litre CRDi 100kW/280nm (manual) or 100kW/300nm (seven-speed Dual Clutch Transmission or DCT). The six-speed manual is only available on the Active Premium variant.

The big gun in the field is the relatively warm i30 SR that’s endowed with a 150kW/265Nm 1.6-litre turbo-GDi petrol engine with a seven-speed DCT or six-speed manual.

The buzz word Hyundai uses to describe its exterior lines is ‘Fluidic’ and this time around it really looks the goods, in dare I say it, a European way. The front end scores a new interpretation of its ‘Cascading Grille’. All models now score alloy wheels ranging from 16-inch to 18-inch, the car itself also sits lower but is longer and wider. The rear-end features a kind of 3D sculptured look that completes the picture. It is almost Golf-like in appearance from certain angles. 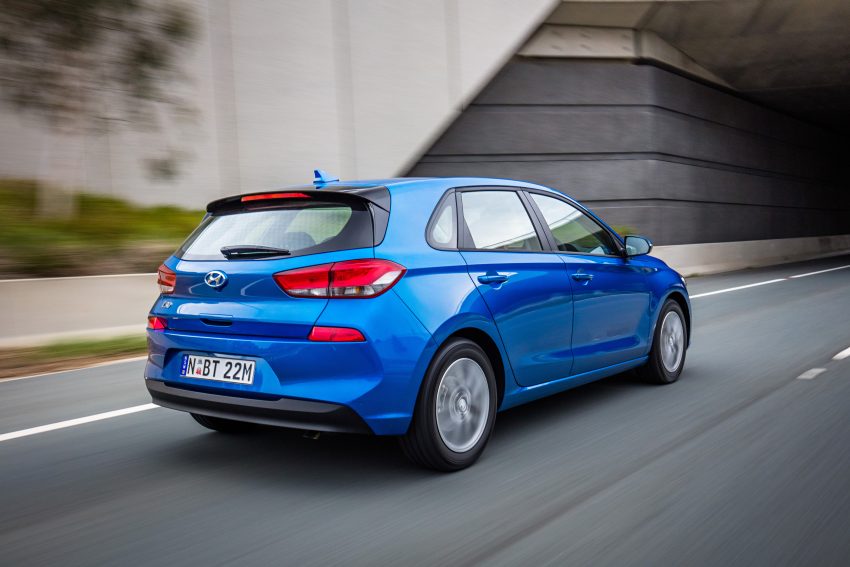 The interior is not just an incremental improvement, it’s a giant leap up from the previous effort. Throwing around the word ‘premium’ is risky for this category, but in some of the higher grade models, the colour schemes, feel of the leather and use of high grade plastic is top notch. The dash has a kind of wing shape to it and is presented in a functional horizontal style. There is still the odd bit of scratchy-looking plastic around, especially around the window buttons but such anomalies are scarce.

The standard 8-inch infotainment screens sit prominently at the top of the centre dash, it’s clear, and simple to use and features for the first-time Hyundai’s new user interface. Space is good, although headroom is less than the previous model, but still competive with others in this space.

The Tech and Safety. 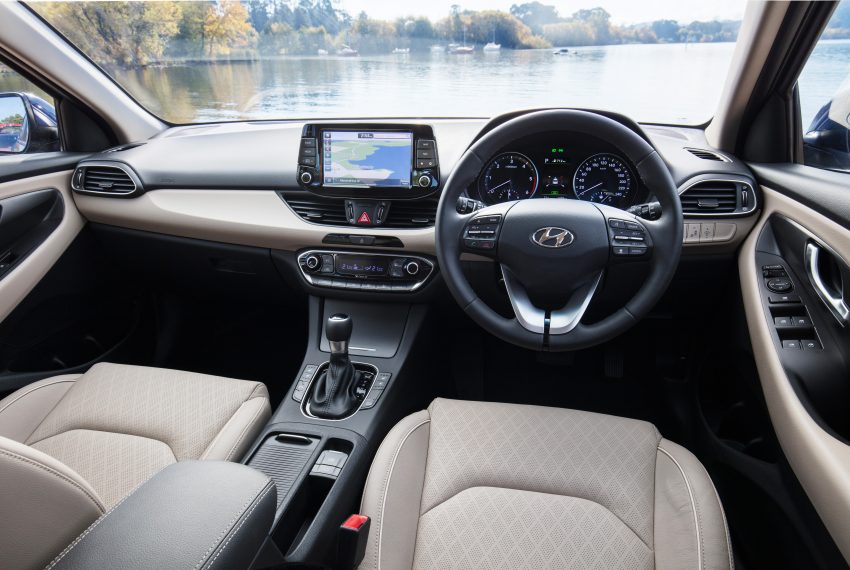 Hyundai SmartSense is a driver assistance package offered to varying degrees depending on the model. Autonomous Emergency Breaking (AEB) and Forward Collison Warning (FCW) uses front mounted radars in the grille and windshield to detect both vehicles and pedestrians in front of the vehicle. In fact, rogue pedestrians can be detected up to 64km/h and vehicles up to 180km/h. Combined with AEB, the system can completely stop or dramatically slow the car if the driver ignores the initial visual and audio warnings.

Blind Spot with Lane Change Assist is standard on the SR, SR Premium, Elite and Premium variants, as is Rear Cross Traffic Alerts, Smart Cruise Control and Emergency Stop. A reversing camera comes as standard on all models with guiding lines and rear sensors, you’ll need to upgrade to Premium variants to score front sensors. 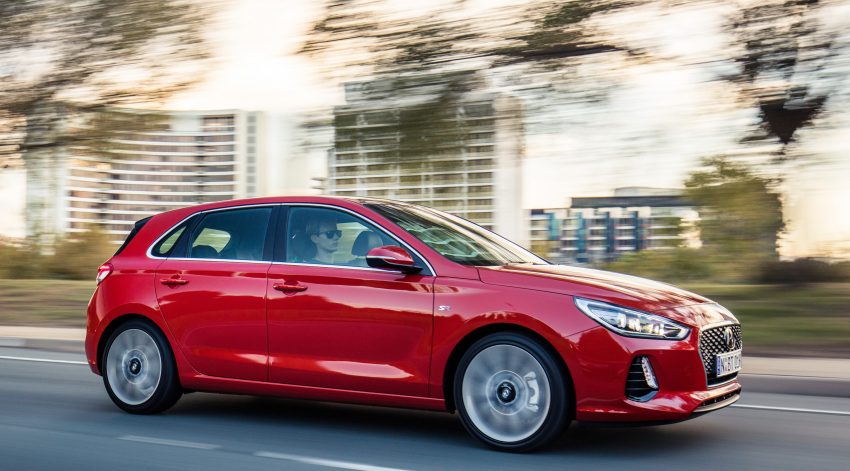 The base Active is a great little performer, the manual transmission gate is easy and light, and power delivery is lively, 120kW puts it above other base contenders. The non-SR models score a less sophisticated rear torsion beam suspension tune but still hustle along in a very well balanced way. It can become unsettled mid corner but recovers quickly and remains predictable. The steering is crisp and light and makes for a very natural feel. Hyundai went to great lengths testing and refining the cars ride to suit Aussie conditions, they’ve just about nailed it.

SR models score the multi-link suspension and firmer, lower ride. This is the ultimate set up in the range if you’re a real purist. While it’s not a blistering hot hatch, this car can still be chucked into corners with surprising ease and gusto. It’s simply a very fun car that loves to be pushed hard. The extra side bolstering on the front bucket seats and splashes of red piping trim including the seat belts, really gives the SR some eye-catching qualities as well. 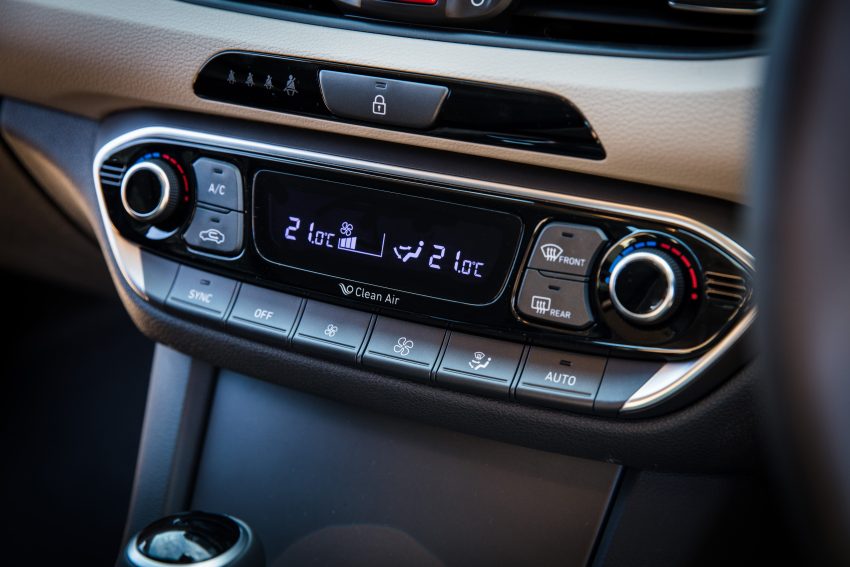 Braking performance is very solid across the range, surprisingly the SR models have a better progressive pedal feel to them than the beefier SR brakes that are a bit more wooden feeling. 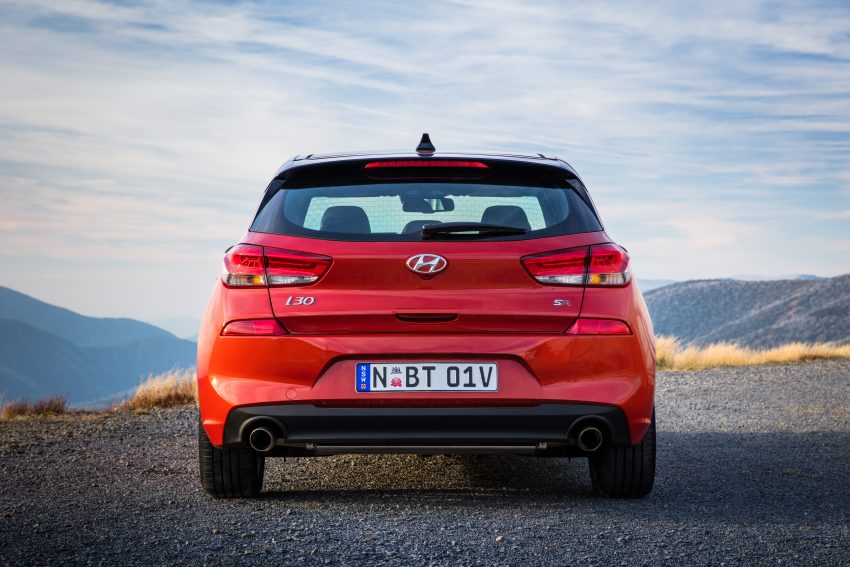 Metallic paint is $495 across the range, an attractive beige interior $295 while you’ll need to fork out a whopping $2000 if you really need a panoramic sunroof.

The range is covered by Hyundai’s 5-year unlimited kilometre warranty with a 15km interval capped price servicing plan on offer. 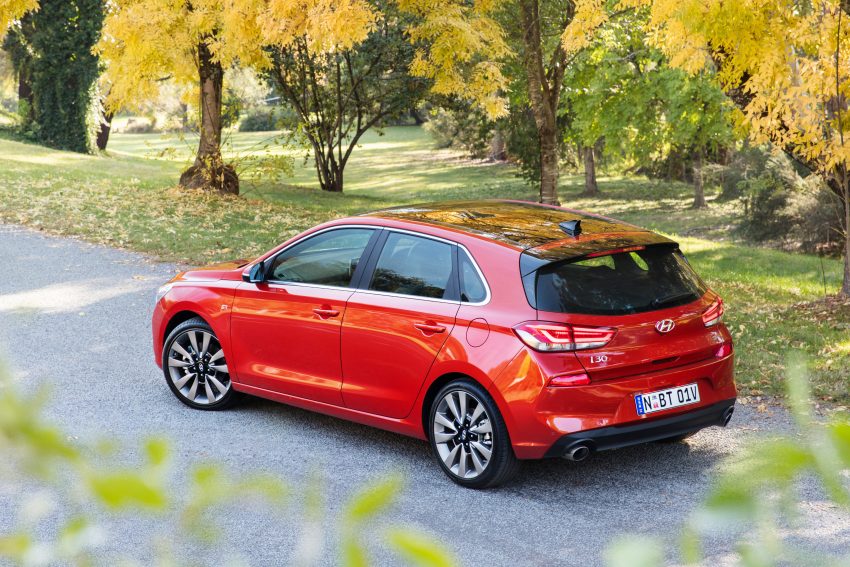 Standard features such as Apple CarPlay and Android Auto and an 8-inch infotainment screen are very impressive for this category. The premium fit and finish inside and out and attractiveness of the sleek design are also a huge bonus. Performance wise the i30 is right at the very top in the category and it handles like it was a fully Australian-made car. I award the 2017 Hyundai i30 the EFTM Credit Rubber Stamp of approval.