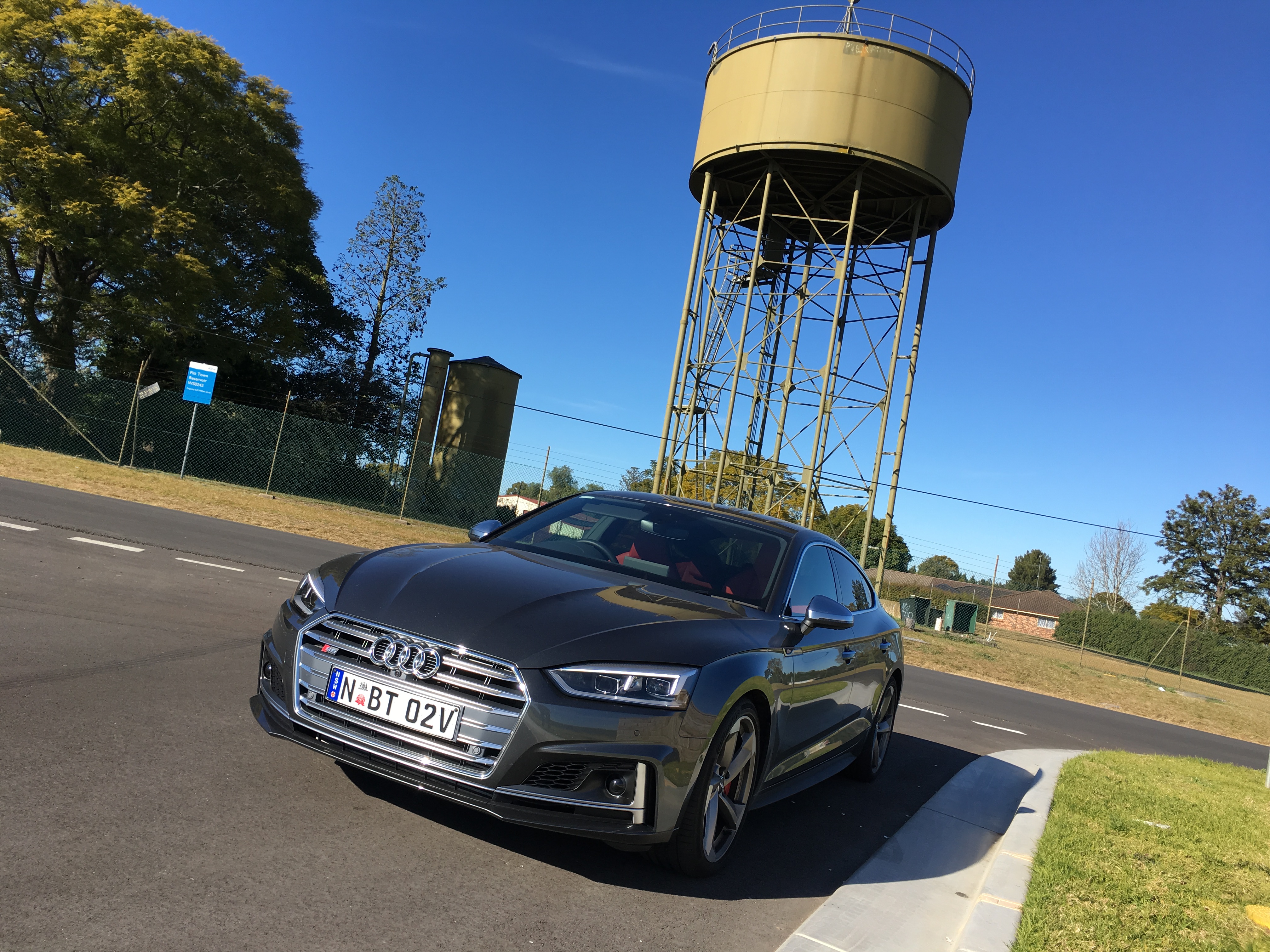 Back in March the Audi A5 and S5 coupé were launched, an exciting clean-sheet design after the previous model’s 10-year reign. Then we saw the A5 range expand with the arrival of the Sportback five-door variant. Chris Bowen spent a handful of quality hours behind the wheel touring The Great Ocean Road at the national launch, but now he’s spent a solid week living with the most powerful variant on offer so far, the Audi S5. 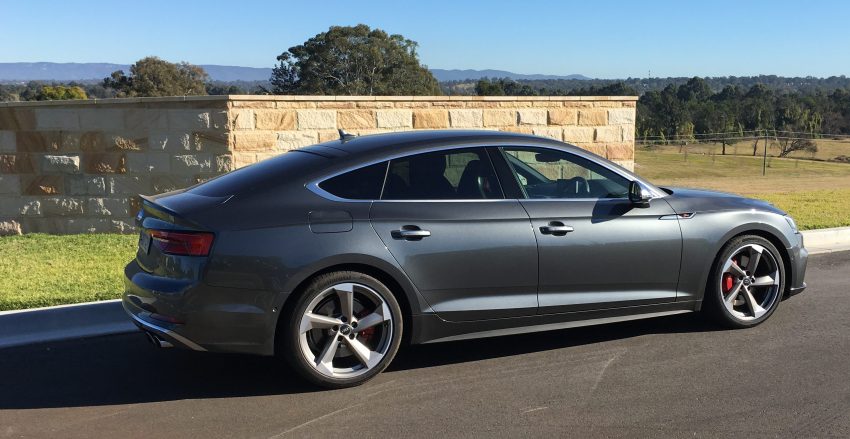 As with the coupé the overall design has evolved without diminishing the already beautiful A5 looks. The side ‘Tornado Line’, enhanced wheel arches, power bonnet bulge and Quattro stance combine to form a piece of fine art.  In fact, the new platform was built around the Sportback whereas with the previous model the back-end looked a little bolted on. Being a Sportback it has that long sweeping rear hatch-style door that really makes for a totally beautiful car.

The car now has a longer wheelbase offering rear seat passengers 24mm of extra legroom. The new model is marginally narrower than the outgoing A5 but manages to offer more interior space. It’s up to 80kg lighter depending on the model with numerous weight saving measures such as an aluminium tailgate and redesigned suspension. 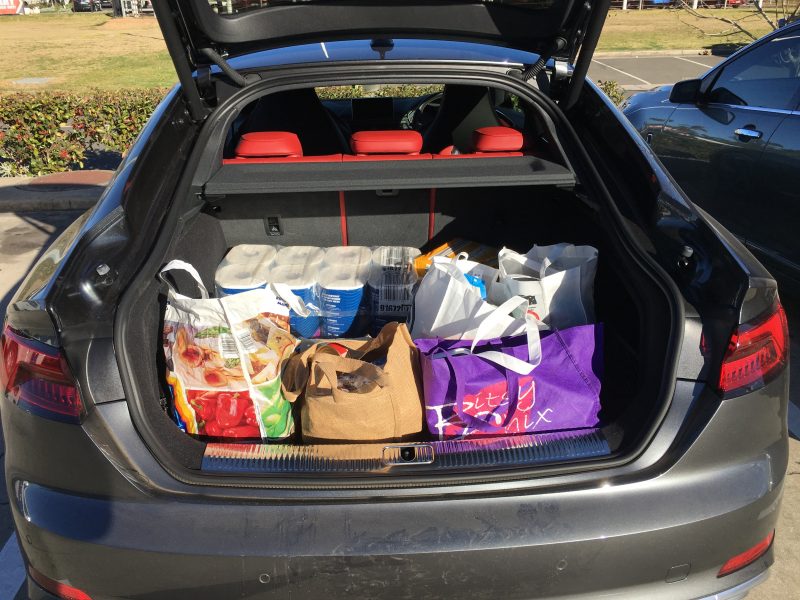 What you get over the coupe is great boot space (480-litres) and the ability to sit two people in the rear without causing an imbroglio. A full supermarket was easy devoured and with the rear seats able to fold 40:20:40 it becomes an Ikea flatpack carrying ship with space ballooning out to 1300-litres.

The S5 has the same 3.0-litre V6 TFSI quattro Tiptronic engine found in the S4 producing figures of 260kW/500Nm. The claimed fuel economy is 7.7L/100km although I did no better than 11.7. The S5 sends all those figures through a lightening quick 8-speed automatic with paddle shifters, and with the added option of a sports differential, this car becomes a serious weapon. 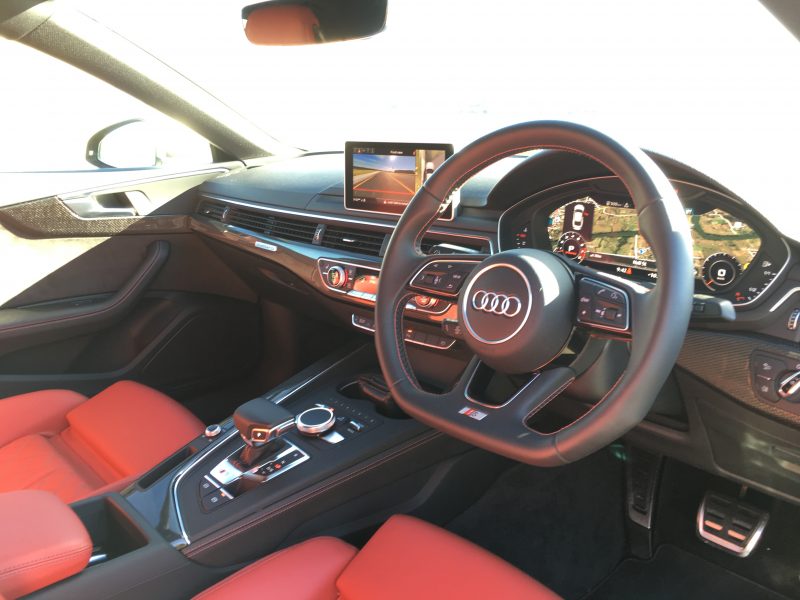 This is one heck of car to hammer but vice versa it’s also a remarkably sedate almost gran tourer if you so desire. The engine note is far from raucous but includes just enough pops, crackles and underlying growl to keep any prospective owner addicted. In fact, it’s ballsy enough to prick the ears of my wife inside the house on start up every time. The 4.7 second dash to 100km/h puts it in the very quick club but as with the TT RS, which we will review shortly and many other Audi models, it doesn’t feel that rapid. I guess that’s a refinement thing, it builds speed with no traction loss or any hint of spitting the dummy. 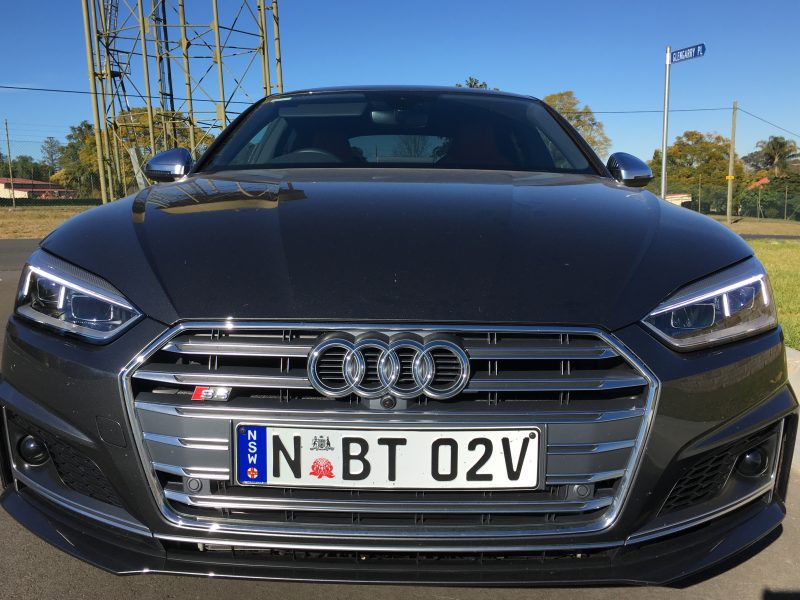 The quattro system and torque verctoring at every wheel sends chills down the spine when you arrive and exit every corner. With some of the recent Audis I’ve been driving, including the TT RS, I’ve concluded that the company is creating vehicles that are almost impossible to throw off balance   let alone off the road. At the very edge, you can feel the extreme level of sophisticated nanny-systems conducting each wheel as if they were each an individual orchestra. No driver on the planet can control a car in such a way.

The steering has an exacting level of feel and precision that puts it very close to the ultimate driving experience that BMW has prided themselves on for so many years. The usual array of driving modes are there, Auto, Comfort, Sport etc, but it’s the latter that really brings this beast alive. It tenses up the steering, dynamic dampers and throttle while opening the exhaust allowing it to bust out some very angry noises. 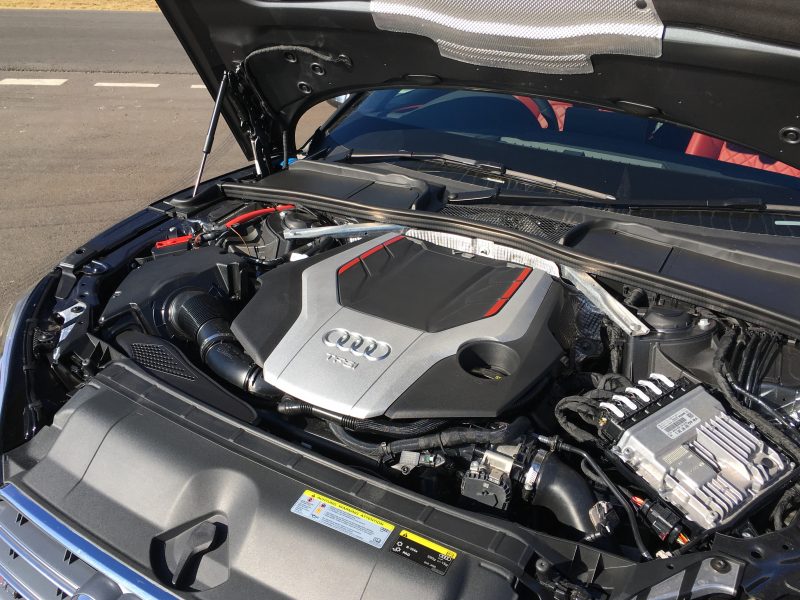 The class-leading Audi Virtual Cockpit is standard as with the non-performance A5 range. This turns the instrument cluster into a dazzling display of Google Mapping thanks to an onboard SIM card. The S5 has its own unique graphics and presentation to further distinguish itself from the rest of the line-up. The MMI controller directs a tablet-style 8.3-inch screen removing the need for distracting touchscreen inputs. The same functions can be replicated from the steering wheel and displayed on the 12.3-inch virtual cockpit. 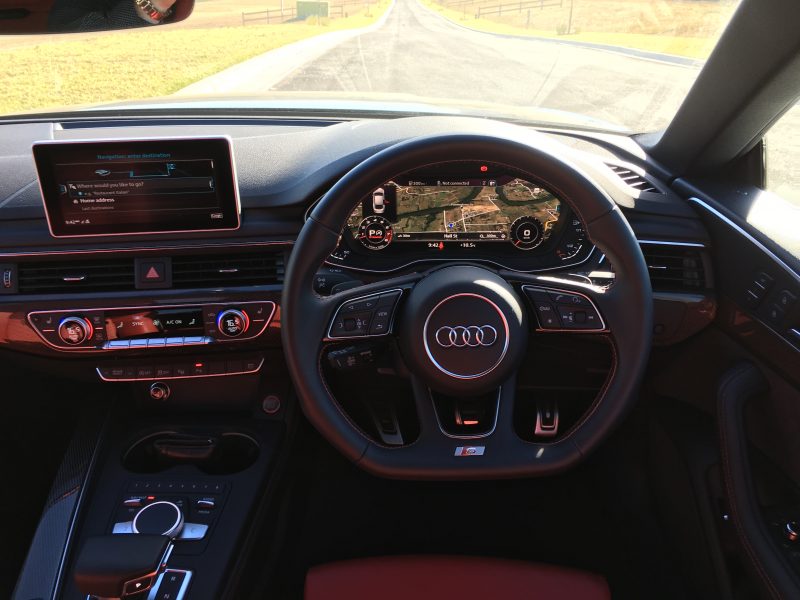 Also standard is Apple CarPlay and DAB+ radio. The interior layout is the same as the coupé so includes the quality and clever little touches such as haptic touch buttons that operate the interior roof lighting or centre console functions.

There are some very neat safety features such as LED lights in the door handle that light up red if you attempt to open a door into the path of an oncoming cyclist. The rear brake lights can even strobe to warn wayward motorists they are approaching you too fast. 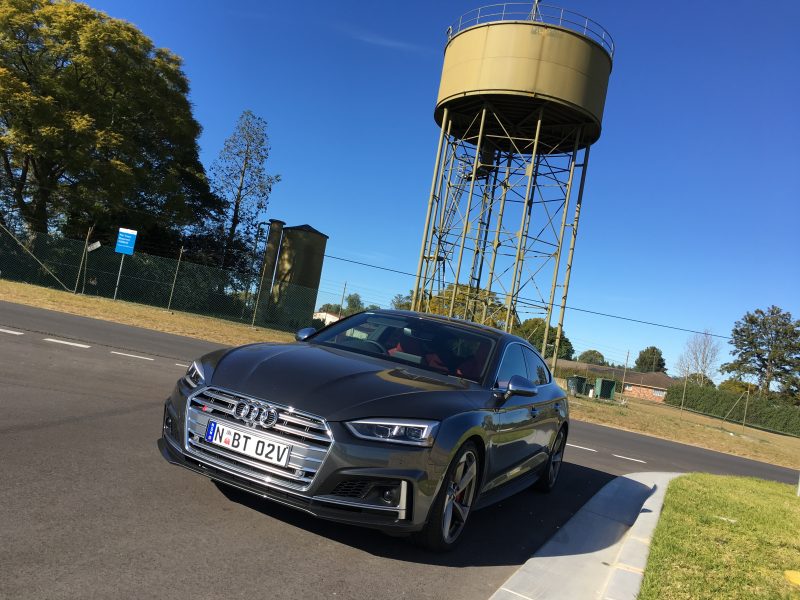 It’s a big year for the A5 range with a cabriolet and crazy RS5 models still to come. Audi expects this Sportback model to account for 52 per cent of sales in the range, which makes sense given its versatility. Throw on the S5 badge and you have a spacious, luxurious weapon that leaves many of our homegrown V8 sedans dead at the lights. I award the Audi S5 Sportback the EFTM Distinction Rubber Stamp of Approval. 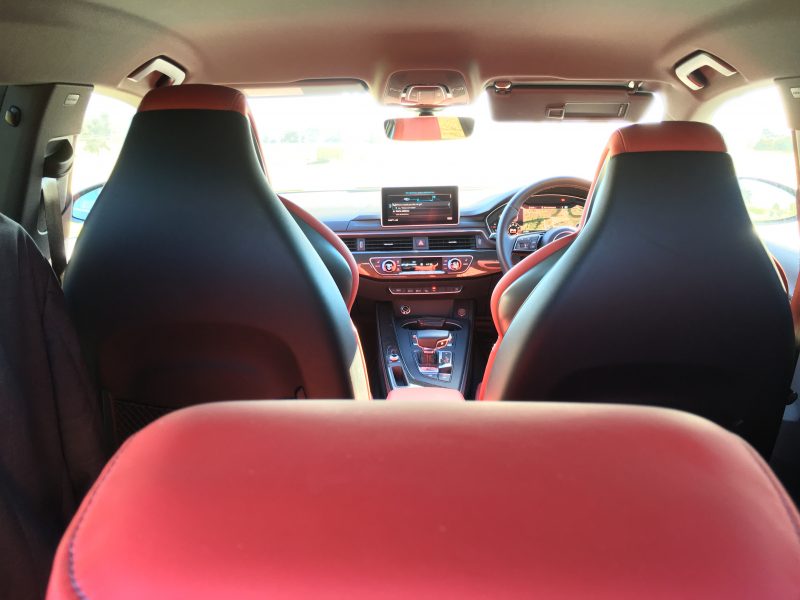