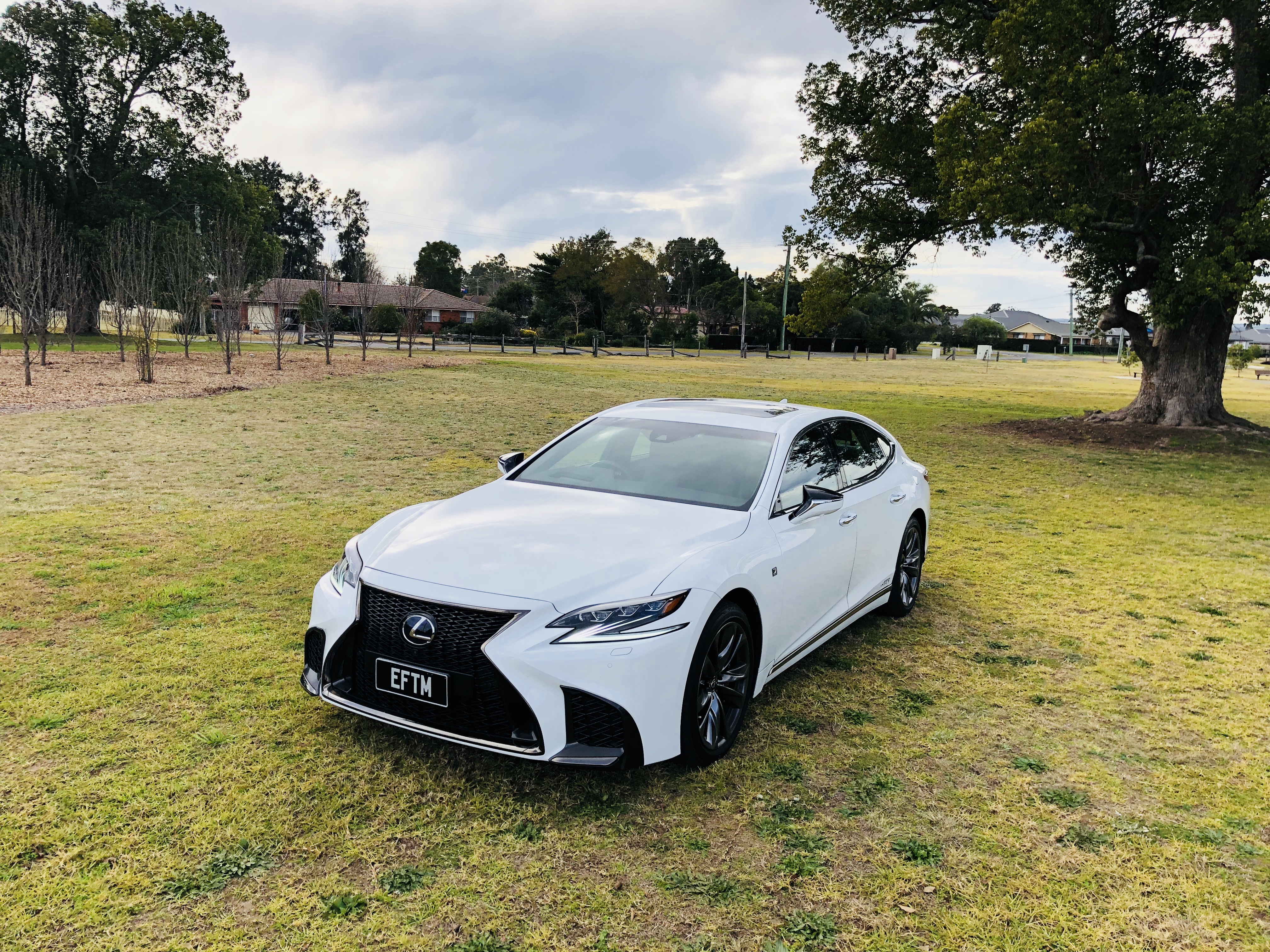 The flagship of any car manufacturer represents the pinnacle of what that company can achieve. It sets the benchmark and often debuts technology and features that flow on into the rest of the model line-up. Sitting at the top of the Lexus tree is the LS 500 and LS 500h. Luxury full-sized sedans that only those with fat wallets and a need to be chauffeured around can afford. Chris Bowen spent two weeks with the big two.

This is a giant of a sedan. It sits proudly wide and long but with somewhat of a low, coupe style profile. Irrespective of what variant you choose there’s little doubt the highly complex ‘spindle’ grille gives this luxury barge significant presence. 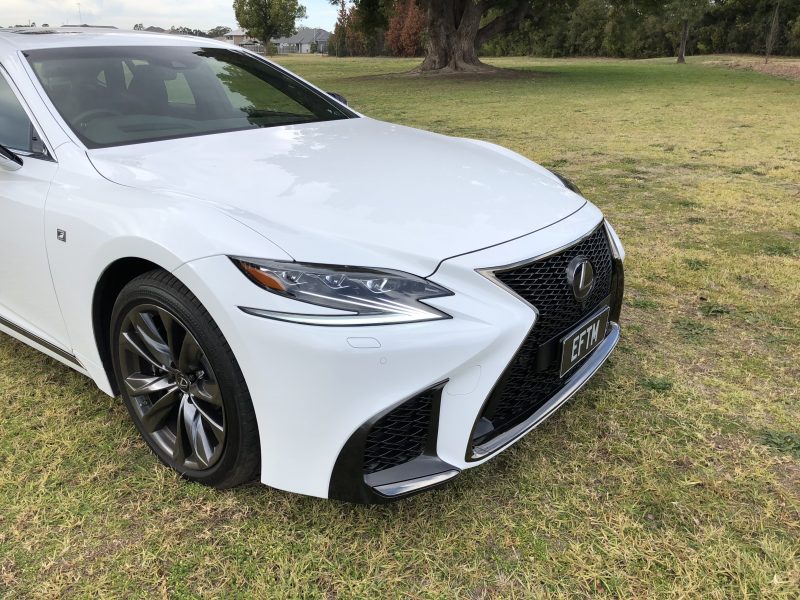 The fifth-generation LS may lack the historical allure of the ever-evolving Mercedes-Benz S Class and BMW 7 Series but that’s certainly no reason to dismiss it. From behind the wheel the car assumes somewhat of an imposing personality. This is a serious chunk of metal that requires respect, especially when arriving at a roundabout! The drive is whisper quiet, mostly ultra-smooth and frankly is one of those cars that you could jump in and drive 1000km in a heartbeat. 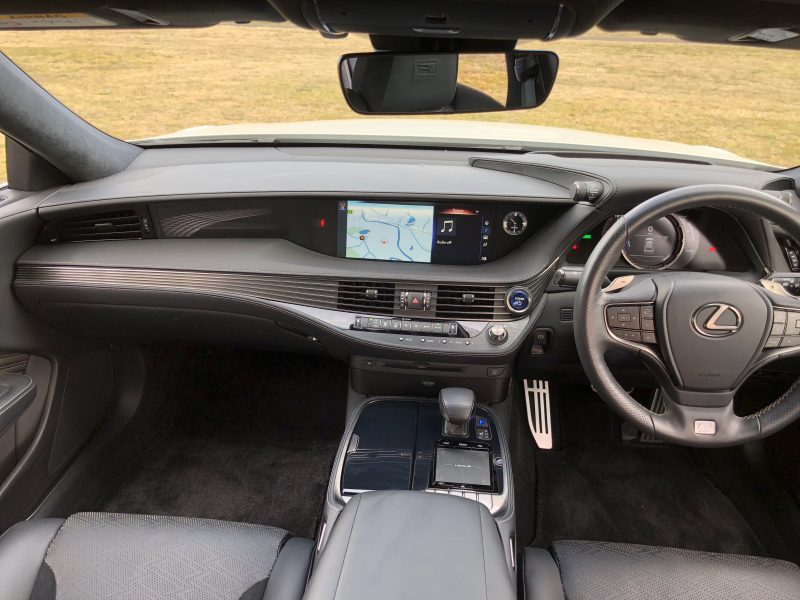 The interior is sumptuous, in a Lexus way. Very little has been overlooked. It’s just a typically well put together Japanese car. The dash layout is broad with horizontal themes and an abundance of leathery goodness. The central armrest features some of the finest and softest leather I’ve touched. I’m not sold on the red interior of our Luxury Sport test car.

With double glazed windows and electronic retractable rear sunshades, you can be comfortable in the knowledge you are certainly sealed off from the outside world. There’s even a Shiatsu massage function for heaven’s sake! 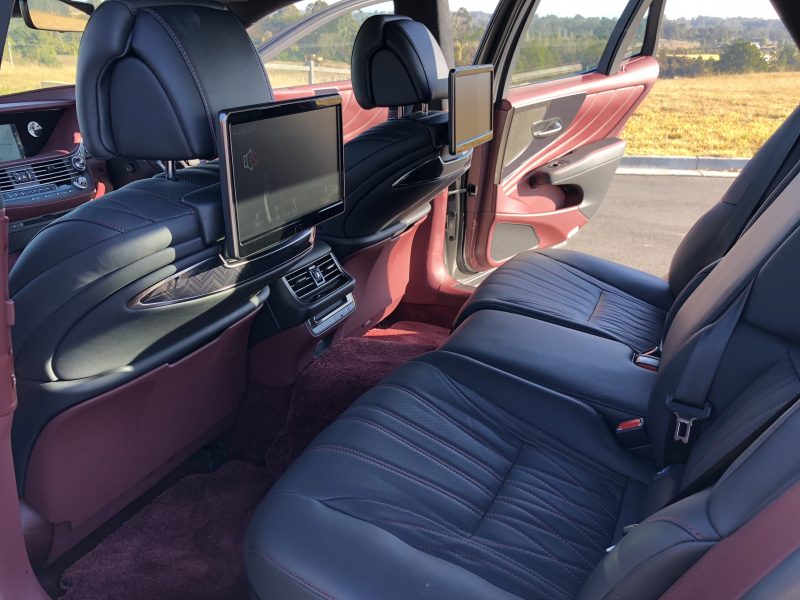 There are two powertrains and a couple of different style packages. For some serious punch you may want to pick the 310kW / 600Nm twin-turbo V6 that’s matched to a 10, yes 10-speed automatic. The V8 has been dropped and to be honest given the significant power gains of the new V6, who cares! Fuel economy is rated at 9.5L/100km. I took it for the laborious drive from Sydney to Canberra and hit 9.6L/100km, impressive for me and a car of this size. 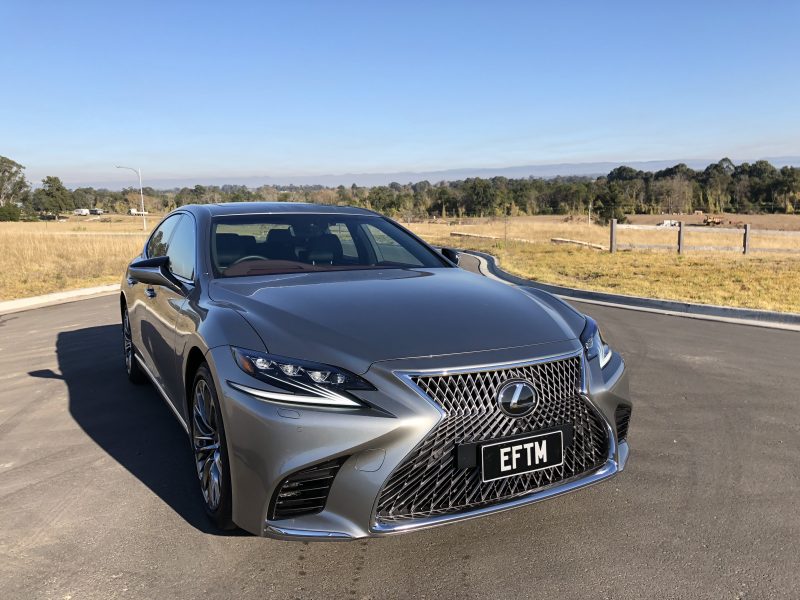 For those with a hybrid bent, Lexus installed a multi-stage hybrid system in the 500h that combines the power of a V6 petrol engine and electric motors for up to 265kW. The latter comes with a continuously variable transmission (CVT) and uses a claimed 6.7L/100km, I hovered around 8.0L/100km most of the time.

F Sport and Sport Luxury packages can be selected, allowing for some key stylistic differences between the two. 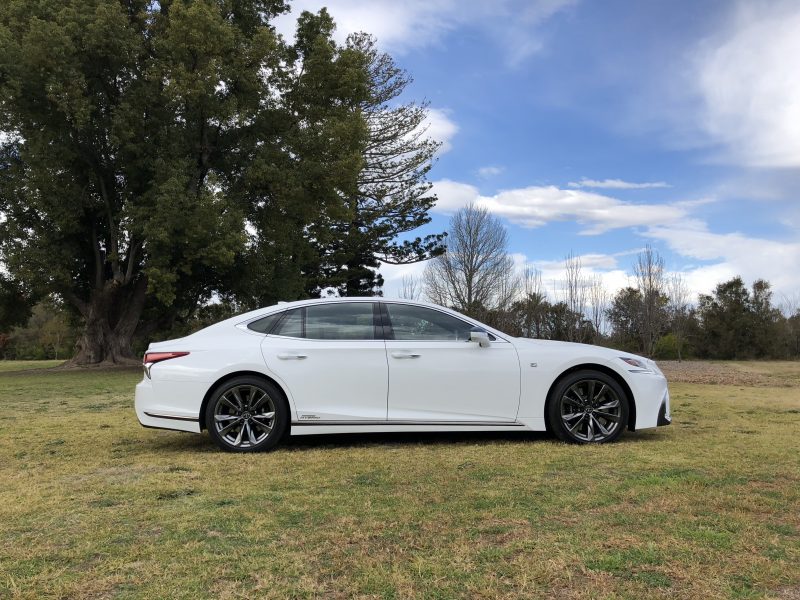 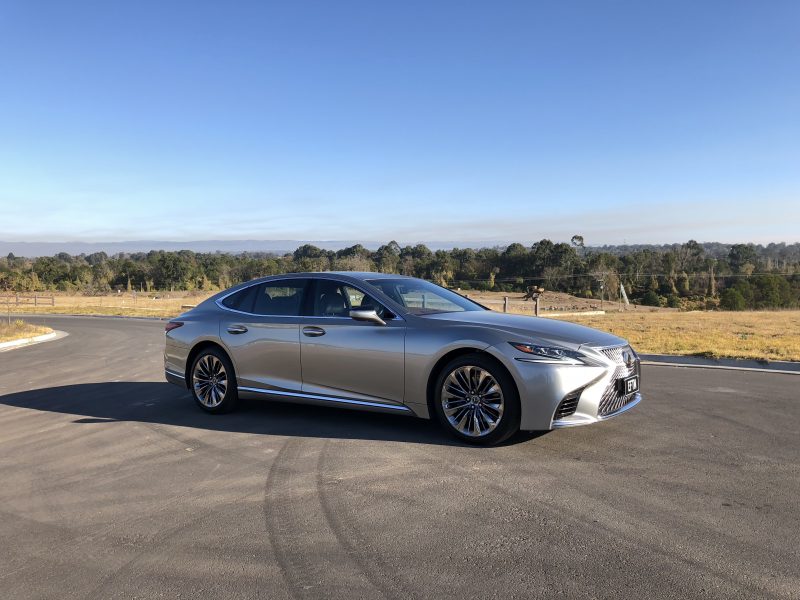 The pricing structure is about as simplistic as it gets at this level and category. For the LS 500 and LS 500h pricing is bang on $190,500. Go for a Sports Luxury model and simply add $5000. Eight interior options are on offer, four of which will add $9,880 for special ornamentation options.

While clearly, we are talking huge coin here, the options are quite reasonably priced compared to those found on European competitors. 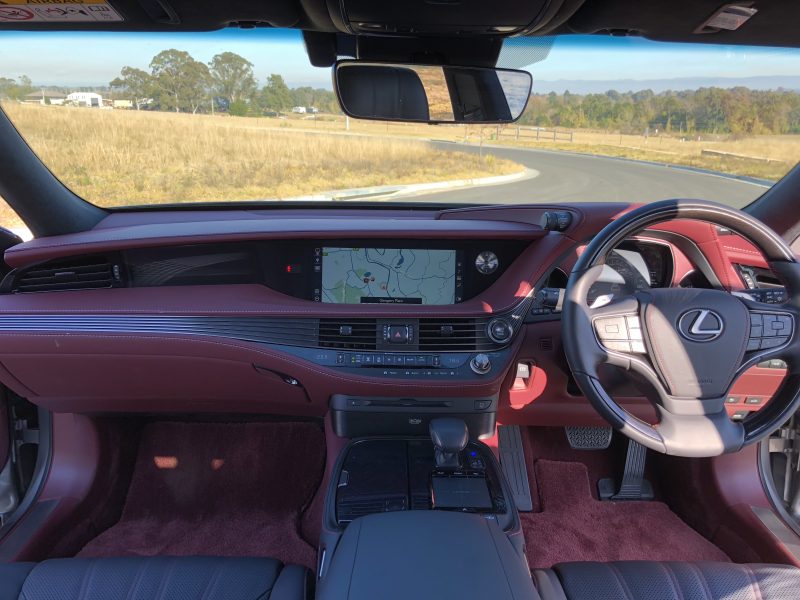 From Behind the Wheel.

Both cars manage to provide a cushy yet rapid drive when required. The 500h while less powerful on paper still provides plenty of punch. My only criticism is the use of a CVT, it simply detracts from what is otherwise a surreal drive. While not a peculiar trait to Lexus the buzzing engine drone and unnatural feel of the power delivery is just not my cup of tea. You can try and manipulate the transmission with paddle shifters via a 10-step process, but it still isn’t befitting for a car of this nature.

But wafting along is what this car is all about and both models certainly do that very well indeed. The adaptive air suspension occasionally trips over ruts and road joints, detracting from what is in the main a magic carpet ride. 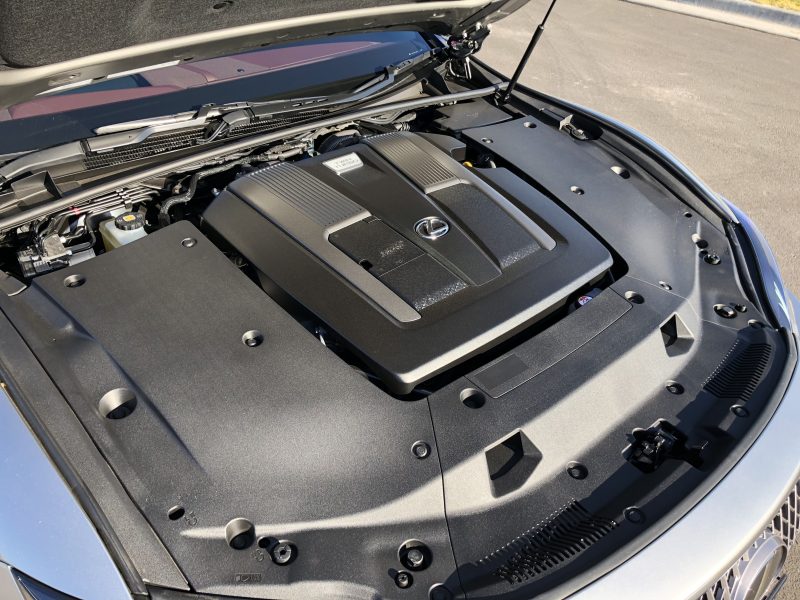 The twin-turbo V6 is a cracker, there’s something about sling shotting a 2.2 tonne cocooned luxury beast down the road with enormous pace, it hits 100km/h in five seconds flat.

I’d hardly say the LS ever feels agile, its dimensions just don’t allow for it. Nor can it match the inherent knowhow its European competitors have when it comes to nailing handling.

I’ve been driving the new Audi A8 and that car really puts into perspective just how down on technology the LS actually is. But having said that I feel it may well appeal to an older buyer who simply doesn’t require the almost overwhelming levels of magic in the latest range of German-made equivalents. 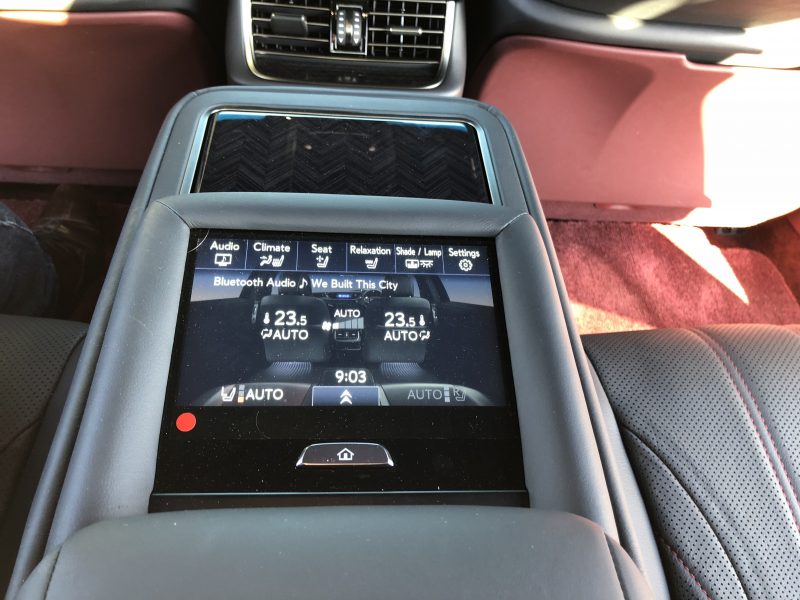 Having said that there are some decent highlights. The head up display has to be one of the best I’ve seen. It displays about a foot’s long worth of horizontal information. Safety technology is at the forefront. The Lexus Safety System+ includes a pre-collision system, radar cruise control, lane keep assist, blind spot monitor, rear cross-traffic alert and adaptive high-beam LED headlamps. 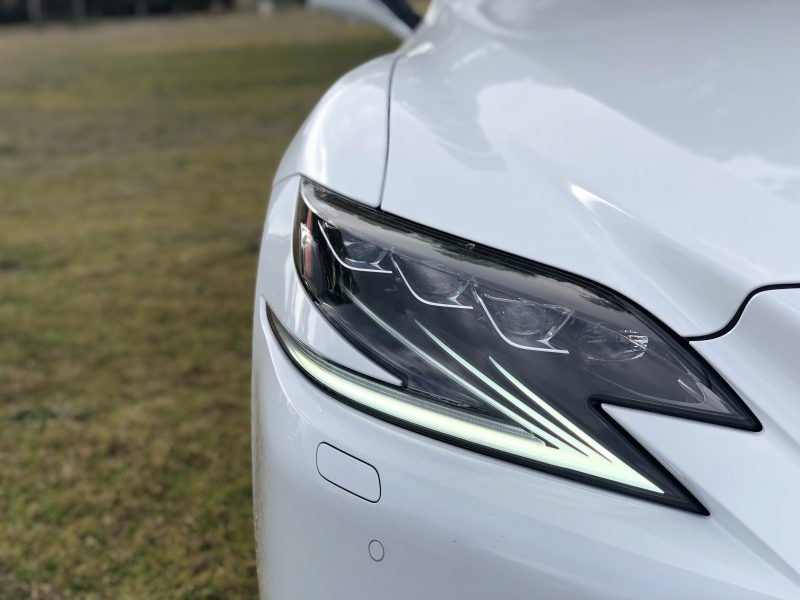 But none of these systems can match the smarts of the others. The software power is simply not at the forefront, yet.

The 12.3-inch infotainment screen lacks the class and sophistication of rivals and is controlled by a Lexus touchpad. Which is about as easy to comprehend as a Rubik’s Cube. Sadly, there is no Apple CarPlay or Android Auto integration.

The 23-speaker Mark Levinson stereo system reminded me of being back at Club Troppo at the Central Coast Leagues Club in 1998. There are even roof mounted speakers for 3D effects, it’s epic. 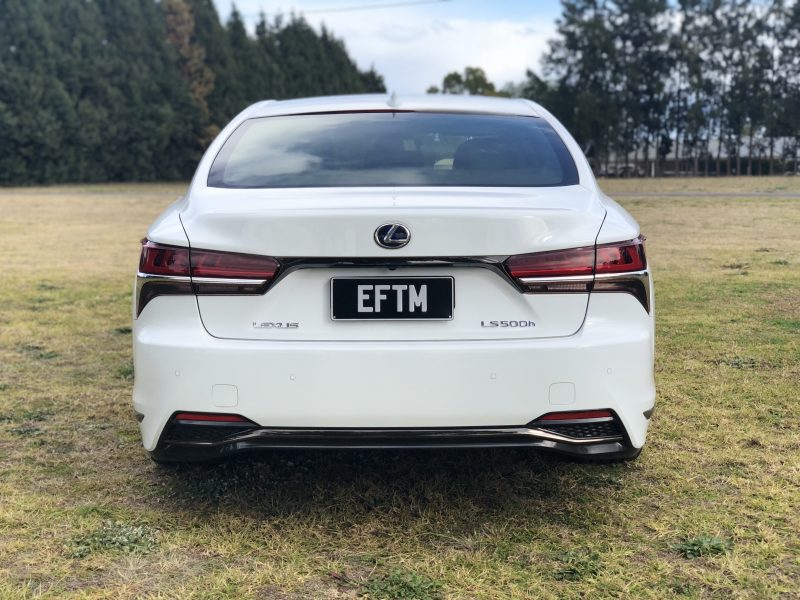 The Lexus LS 500 range is clearly the fourth wheel in this category. But when you examine the numbers, more power than its rivals, sharper pricing and enough luxury to keep everyone but the keenest observer happy, it’s an accomplished vehicle. One that fills its intended purpose very well. It’s a 7 out of 10 on the EFTM Scoreboard for me. 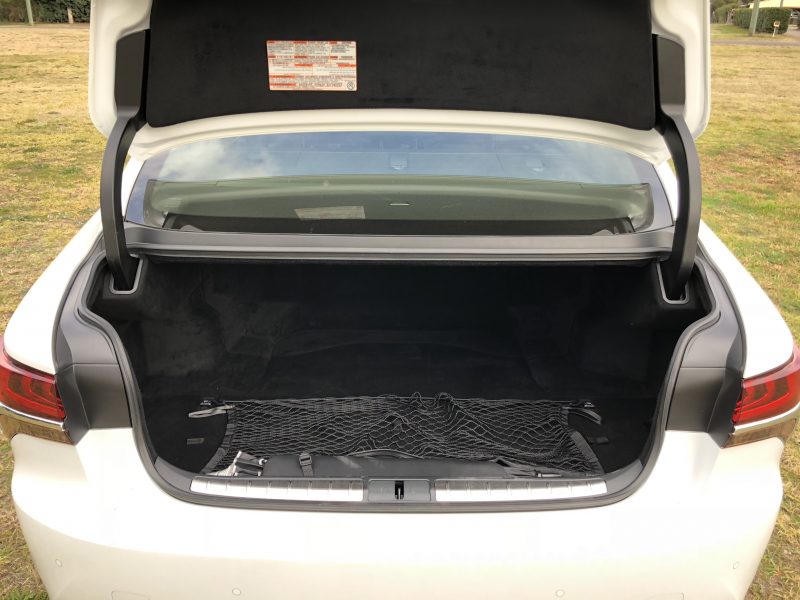