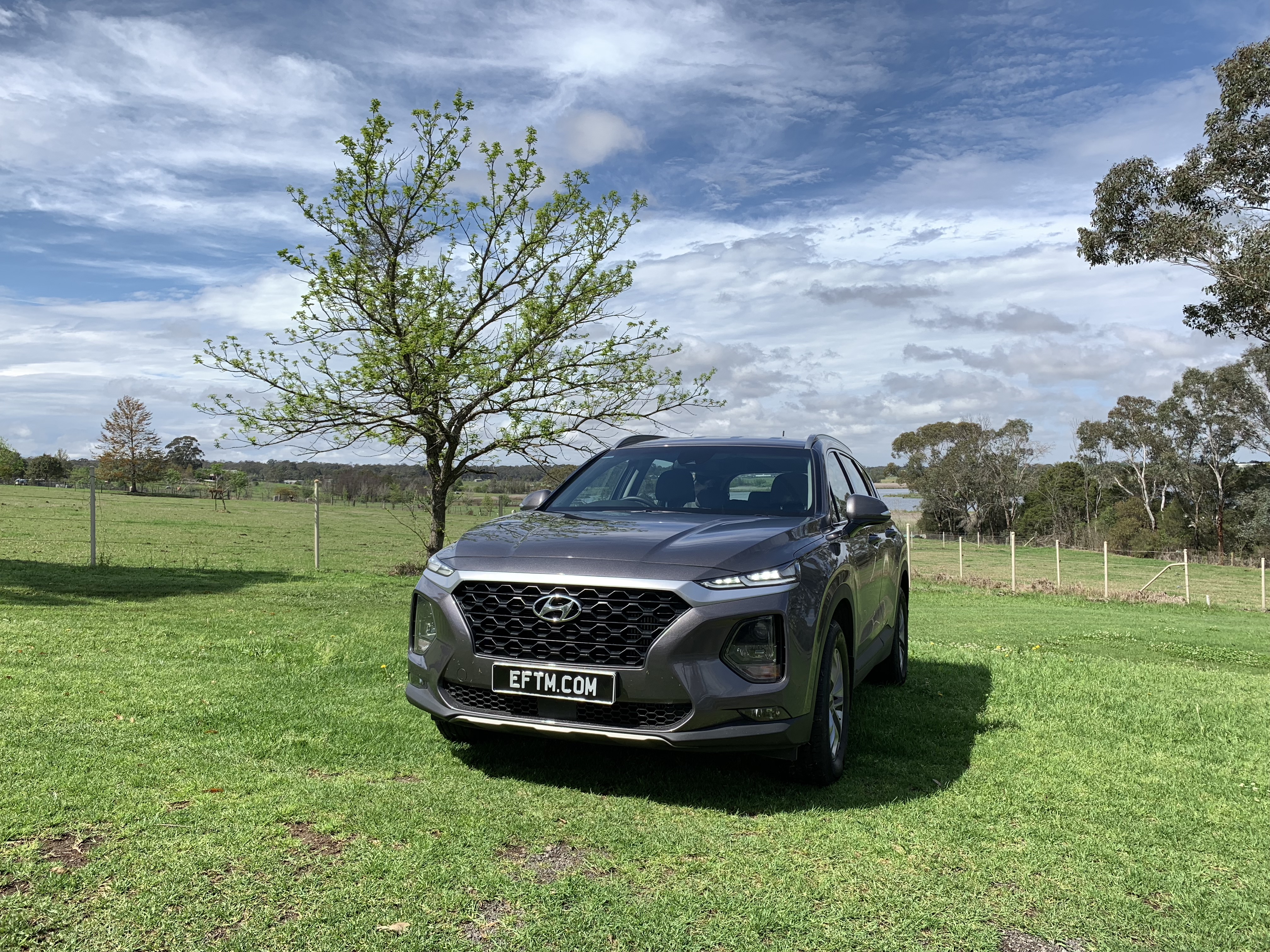 Hyundai’s top SUV is now in its fourth-generation, the Santa Fe has become an acclaimed favourite and there are plenty of reasons why. It features local tuning, a great array of standard safety technology and all-wheel-drive on all three variants. Chris Bowen recently spent a week in the base Active model combined with an optional 2.2-litre diesel engine.

There’s little doubt the Santa Fe has strayed a fair way off the path taken by its predecessor. The grille is striking, with a serious swathe of sword-like chrome trim splitting the bulging bonnet from the lower 3D indented facia. The daytime-running lights are a mere slither of LEDs and the headlights sit below them. Side on are recessed panels and creases, with unusual wheel arches that defy normal convention having been pressed inwards. 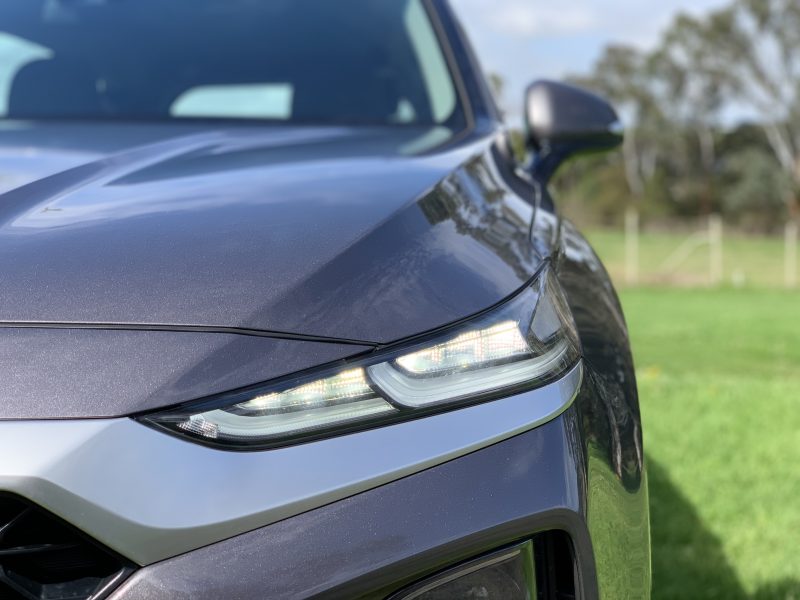 The rear almost has a touch of BMW X5 about it actually, very Euro indeed. It’s topped off by a roof mounted spoiler and twin exhaust poking out from a tough albeit plastic silver panel. 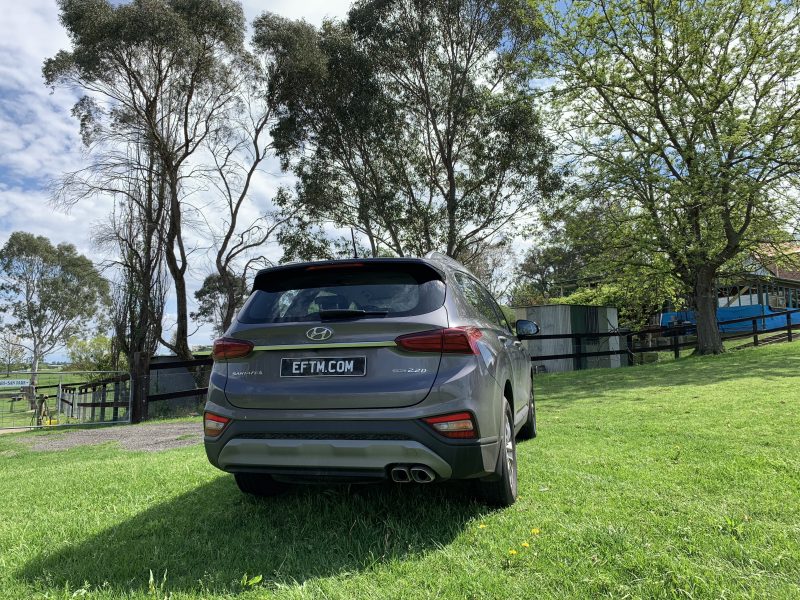 Even on the base Active model the seven-seat interior is pleasing. The air vents are all very angular and modern looking, while parts of the dash are multi-layered. The passenger side scores a sunken portion, while the cockpit gets a raised hood over a separate protruding instrument cluster.

The obligatory 7.0-inch infotainment touchscreen juts out over a set of buttons and knobs for the air conditioning or for simply controlling functions by actually pushing something. 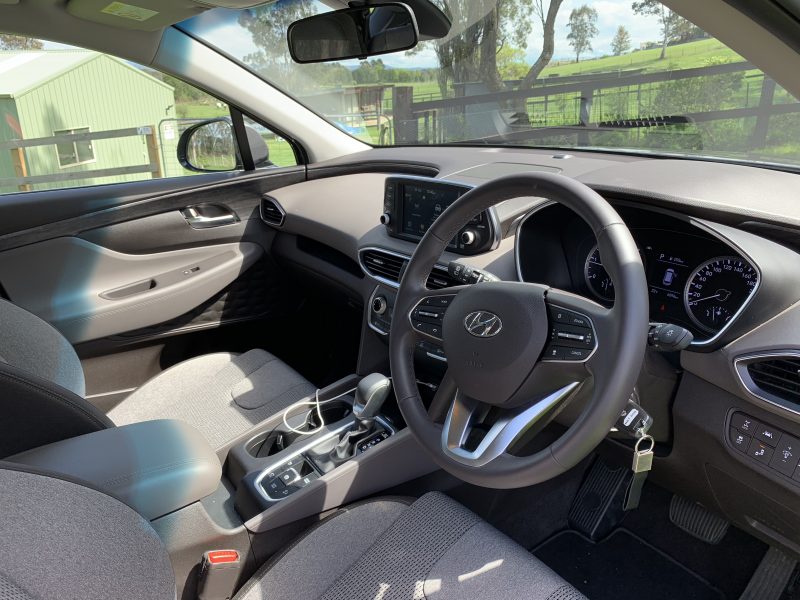 Not all seven-seat SUVs are created equal, sure second row occupants will do fine. It’s possible to slide the whole row back, but the third row is really only good if everyone wants to come on the local milk run. Best to look at the Mazda CX-9, Toyota Kluga or even a Holden Acadia if you want to prevent a war way back there. 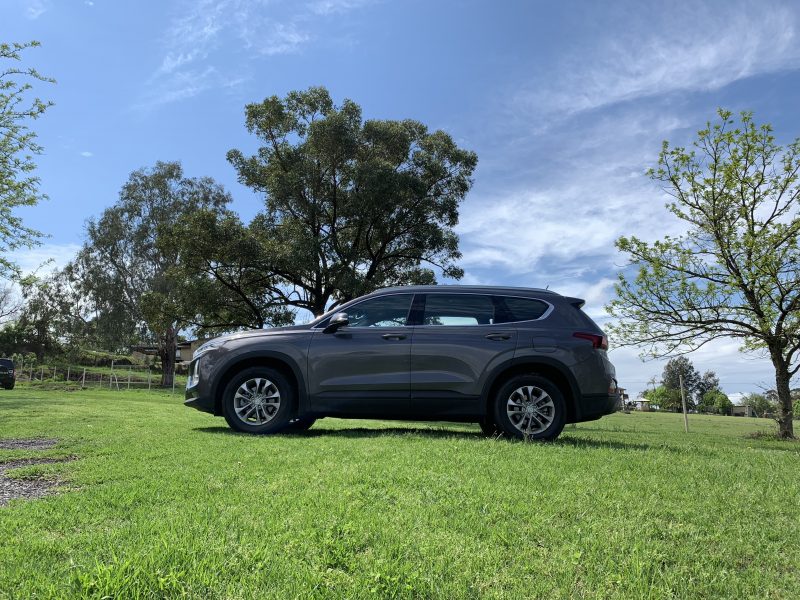 A Korean brand caring to bother with local tuning scores many a brownie point in my book. The combined Aussie and South Korean effort has produced a very sharp handling package indeed. The very capable setup is able to cope with just about anything our crappy roads can throw at it. The 17-inch alloy wheels fitted to the Active go a long way towards ironing out the ride. But body roll is very well contained, and steering is what we’ve come to expect here, not too vague not too light.

Plus, every Santa Fe features all-wheel-drive or what Hyundai calls HTRAC. So, a trip to the snow, slippery surfaces and light off-road work is easy peasy with on demand all-paw control. 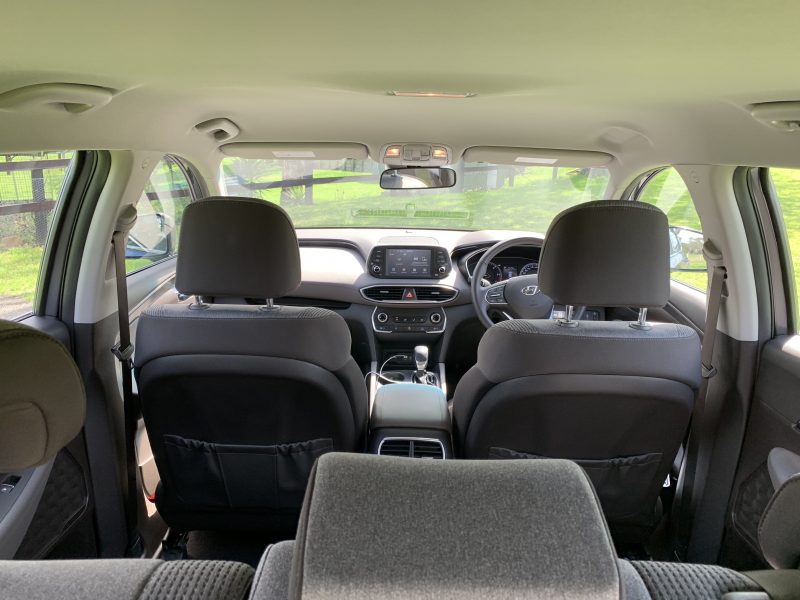 There’s a choice of two drivetrains in the Active. A 138kW/241Nm 2.4-litre naturally-aspirated petrol engine and six-speed automatic or the as-tested 2.2-litre turbocharged diesel. It’s the pick of pack with a 2.2-litre four-cylinder 147kW/440Nm and new eight-speed automatic transmission.

The engine is refined enough for even my wife to enjoy it. In fact, when she had a crack at a petrol 2.0-litre 122kW/205 Tucson the following week she lamented the “lack of power”. Which is obvious, but for a diesel to impress her over a petrol is a big thing. Most turbo-diesel engines are the pick of the pack these days, the torque alone wins every day of the week. 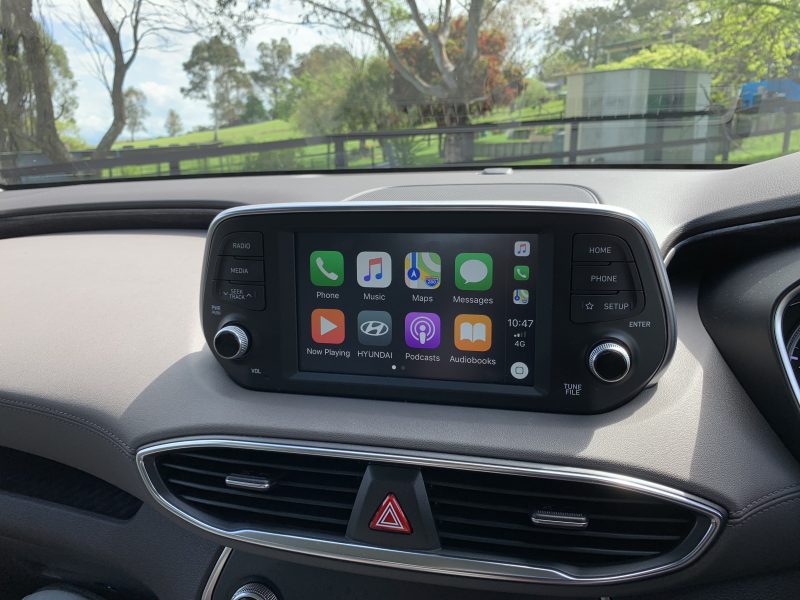 I’m still not convinced most buyers understand the value of the safety systems in cars these days. But even if you don’t, please understand to have the following standard is so bloody important. There’s autonomous emergency breaking with pedestrian and cyclist detection, smart cruise control with stop and go, blind-spot collision avoidance assist, and rear cross-traffic collision avoidance assist systems, driver attention warning, auto high beam and lane keep assist.

Most of that may never come into play, but if it does you’ll be very grateful to the tech-gods.

Another ‘alleluia moment’ is the inclusion of standard Apple CarPlay and Android Auto. Toyota PLEASE see what the others are doing. 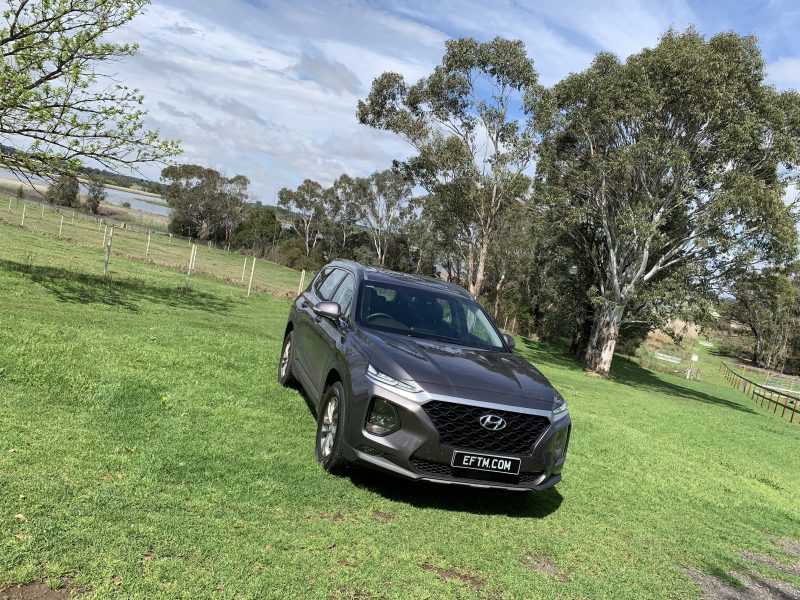 The Active variant proves a base model doesn’t have to be a bare bones effort. In fact, aside from the smaller wheels and cloth interior you’d be hard pressed to separate it from the higher-end models. It drives better than most, offers a modern and sleek design but could probably do with just a tad more third row space. It’s a 7.5 out of 10 from me.