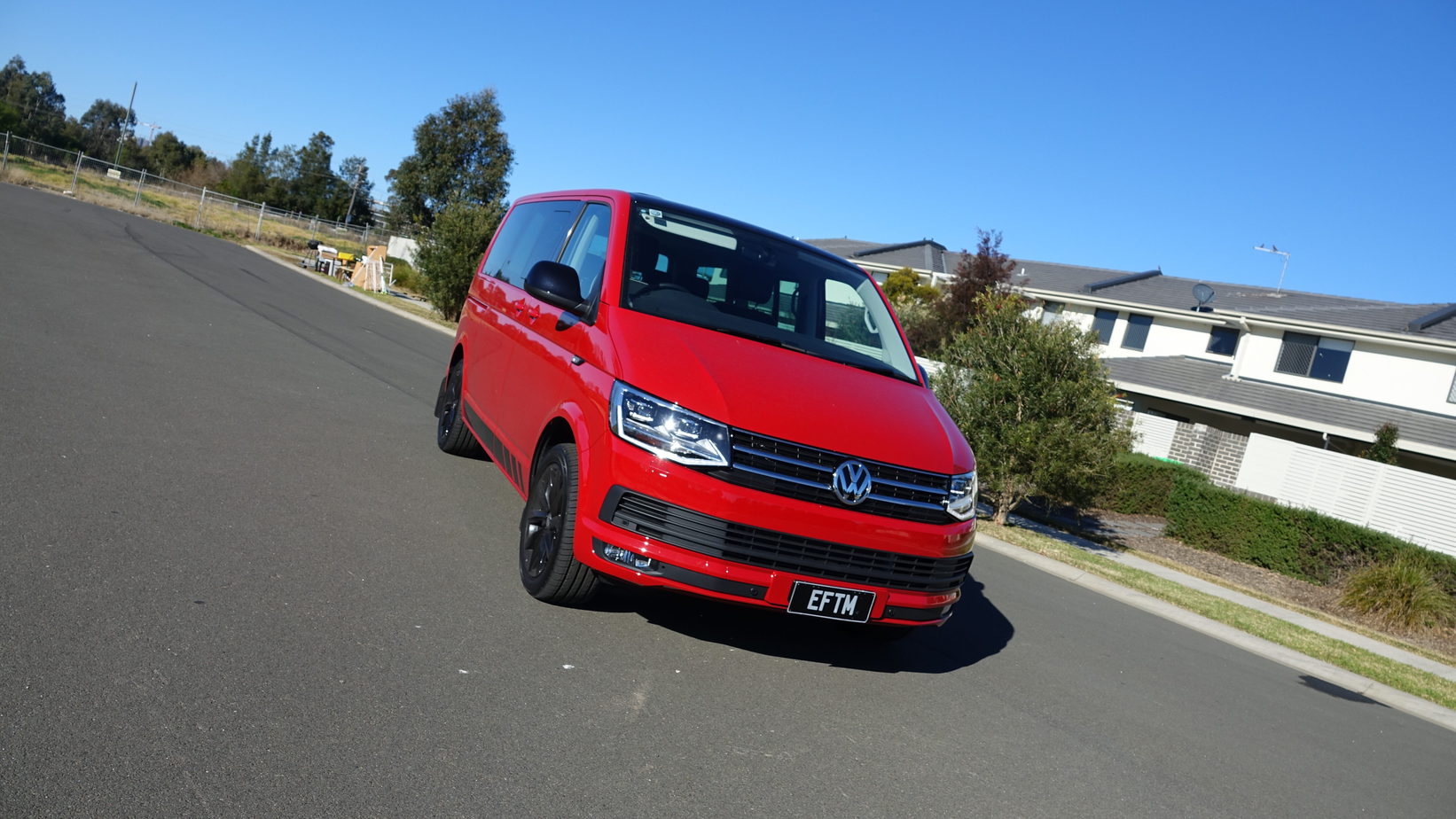 I’ve driven a lot of cars over the last week. But it was the Volkswagen Multivan Black Edition that had me a little captivated. There are only 230 examples of the Black Edition available, giving it a tad more appeal. Because at the end of the day this is really just a commercial van with seven-seats.

It’s a people mover, one you can almost stand up in and walk through it thanks to electric sliding doors on both sides. Volkswagen has done a pretty good job ramping up the appeal. It’s based on the seven-seat Multivan Comfortline TDI340.

To stand out even further there’s a choice of six vibrant colours such as Cherry Red, Candy White and the $1720 metallics Acapulco Blue, Tumeric Yellow, Reflex Silver and Indium Grey.

There are black 18-inch alloys, gloss black roof and gloss B-pillars. The cabin scores unique cloth seat upholstery and as you can see black ‘Edition’ decals on the side sills and rear-end.

The floor has what’s called a “Halifax Maple wood” look. It’s washable so perfect for beach goers, hosing out the sand won’t be a problem.

We’ve all heard the term “when the van is a rocking, don’t come a knocking” well you’ll be pleased to hear this. The three-seater bench can be folded forward and reclined into a flat-bed.

Given our Dictator Trevor Long somehow managed to procreate three times, I thought I’d hand the keys over.

Look, it’s a van – there’s no shying away from that fact, that stuck with me the whole time.  Of course, that has an upside, I was able to jam so much stuff into this thing. So, in that regard it was epic.

Down the back, the rear row of seats and the two captain’s chairs are all adjustable forward and back, so you have a real ability to balance luggage space vs leg space for the back and each row.

Middle row seats also swivel so you can have them facing backwards.

Up front it’s a van, folks, sorry, but if you’re shopping Carnival and Odyssey comparisons, this will be the most van-like ride you have.  You get used to it, but it always feels like a big step up into the cab, and that’s a detraction for me as a family car.

But – as an all-rounder, there’s something bloody great about that fully adjustable rear space.

I found it to be a fun drive actually the whole van feeling is very evident. But up front it’s a rather pleasnent place to be. The interior is actually quite premium.

Under the smallish bonnet is a 2.0-litre turbo diesel engine. Power is sent to the front wheels via a seven-speed DSG. Only 103kW and 340Nm of torque is on offer, but I never felt short changed. Although all my driving was done with just me up front.

It also rides well and is actually lowered by 20mm with a specific suspension tune.

Anyone who’s driven a Volkswagen of late will be familiar with the Servotronic steering wheel up front. There’s a colour multifunction display and Apple CarPlay and Android Auto compatibility. The tailgate and sliding doors are electric. Plus, there’s a reversing camera with rear parking sensors.

This is a $63,490 van and one that averages 7.7L/100km, we pulled 9.2L/100km on average. All new Volkswagens come with a five year/unlimited kilometre warranty and the option of service packages.

This is a fun Kombi inspired van that is more than capable of looking after a large family. You just need to look past its commercial underpinnings.