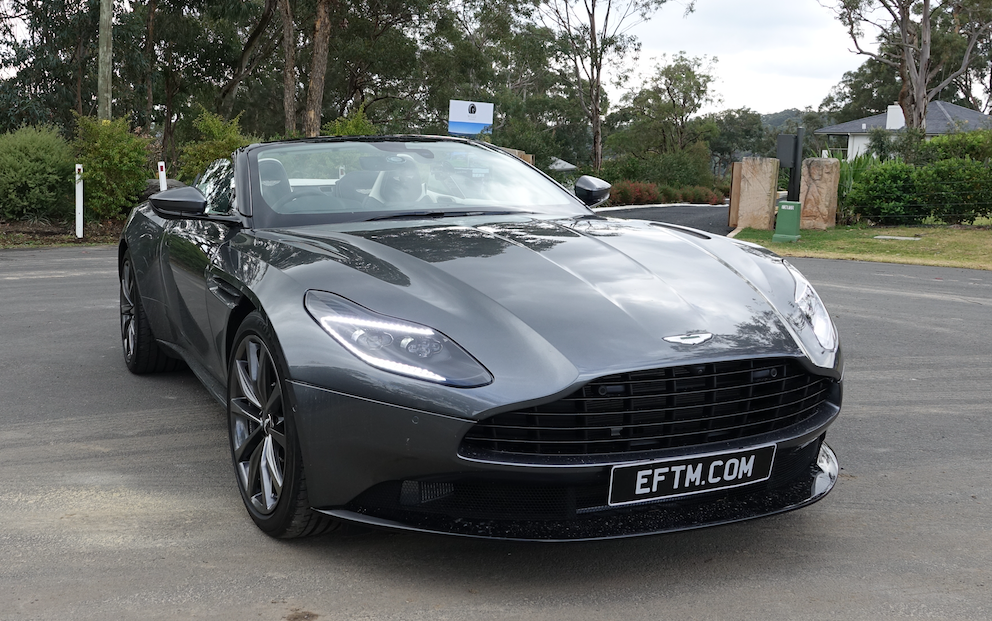 There are some opportunities you just don’t turn down. One of those is driving an Aston Martin all day. As a massive James Bond fan I’ve never had so much fun sitting down. But the DB11 that was handed to me also saw me go topless, because ladies and gentlemen this is the DB11 Volante.

Aside from being as British as Hugh Grant the Aston Martin brand has been pumping out GT cars since the 50’s. Once James Bond got his hands on the DB5 for Goldfinger, well its fate was sealed as a legend.

This version is a convertible, called the Volante. It packs a V8 whereas the DB11 coupe can be had with a V12, whatever…

I think this car is one of the most stunning cars on earth, it’s distinguished, luxurious and iconic.

It’s a good day when you jump into a $400,000 sports car, an even better one when you don’t crash it or draw attention to yourself from the highway patrol. But having said that, the DB11 Volante is easy to drive. This is despite the fact a 4.0-litre twin-turbocharged V8 sits under the bonnet.

Luxury touches are everywhere. The full leather interior is beautiful, they call the cream and black combo ‘Jewellery Dark Chrome’.

Despite being a true Grand Tourer the DB11 Volante can also blow your socks off. It feels very meaty and well sorted for a heavy car and in a straight line will see you lose your licence in 4.1 seconds. Being rear-wheel drive it’s best to perhaps give the throttle about only 30 per cent of a shove in the wet. It will step out like drunk falling out of a pub at 2am otherwise.

That engine, especially when the roof is down sounds most irate when in Sports or Sports Plus mode. It’s a screamer, it’s just a shame you need a track to fully experience one of the great soundtracks. This car can be heard coming from several suburbs away.

There were some optional extras on this car including:

In terms of safety and security most boxes are ticked. It has a Adaptive Damping System, Dynamic Stability Control, Electronic Brakeforce Distribution, Electronic Park Brake, Emergency Brake Assist, Hydraulic Brake Assist, Positive Torque Control, Torque Vectoring by Braking plus Traction Control. Which is all very nice, because pranging this car would be an atrocity.

Just don’t go looking for much else, like Apple CarPlay or the very lastest driver assistant tech. There’s DAB radio and reasonable iPod and iPhone Integration. But due to the Mercedes-Benz part ownership it scores the old Comand infotainment system, which ain’t that good.

Why would you by one?

This is the ultimate Sunday car, end of story.

Perhaps being a James Bond fan makes me biased, but I’m sorry this brand and this car sees me starstruck. It’s a 9.1 out of 10 from me.