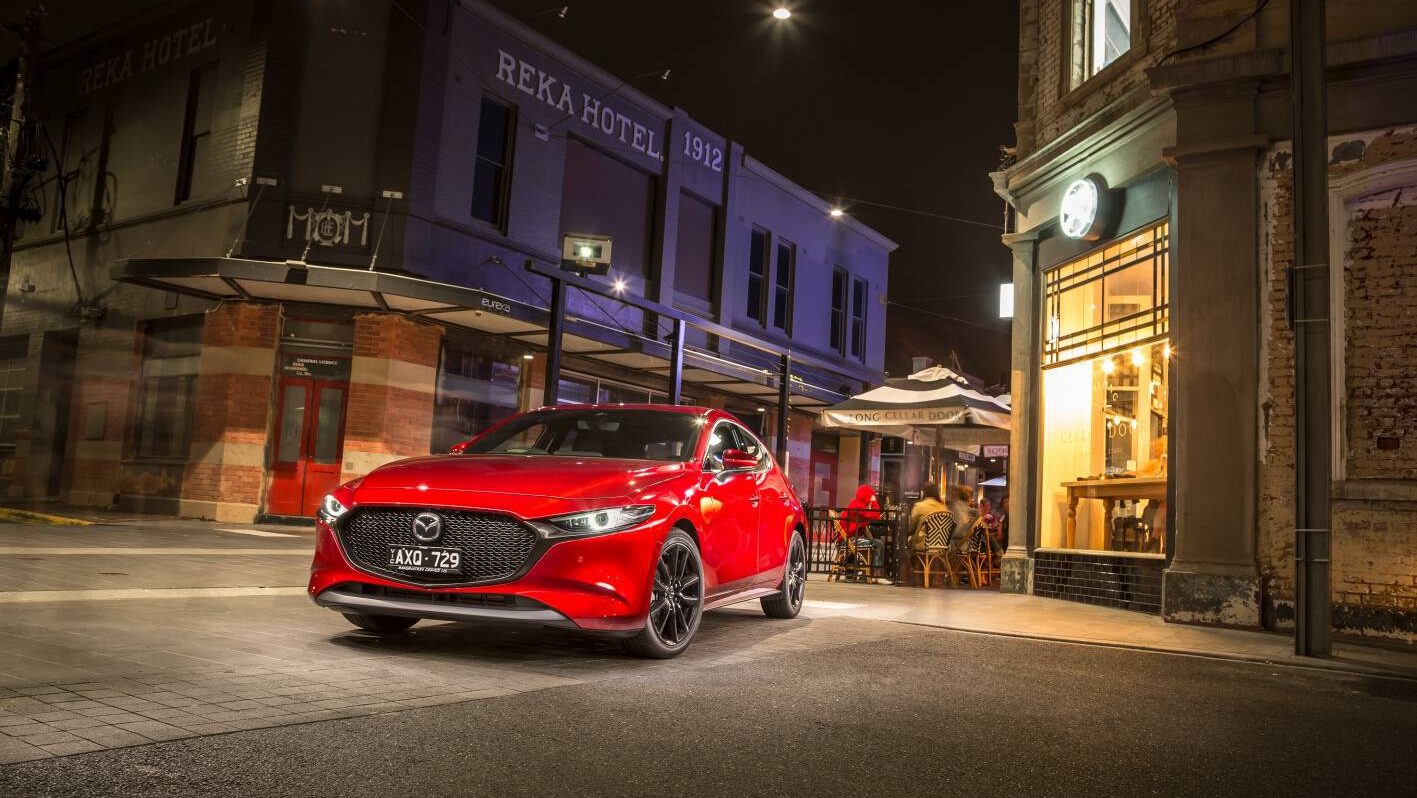 I’ve always loved jumping into a Mazda. I’ve said it before, but I think the brand is the BMW of Japan. What you get looks, feels and drives far better than what the price would indicate. The fourth-generation Mazda 3 hatch again sets a strong benchmark, although you will need to drop a whack of cash for the G25 Astina I’ve just spent a week in.

In Mazda world this car has the latest kit onboard simply because it’s the newest member of the fleet. The ‘Soul red crystal’ example shown here scores the larger 2.5-litre petrol engine. Being the best of the bunch, the car is jam packed with everything you’d expect. It’s premium, loaded with technology and safety features. Plus, I believe it is best in class when it comes road-holding ability.

The styling turns heads, with LED lighting all round including cut-off quad-rings surrounding the brake lights. The only questionable design decisions are the slim headlights and the sloping roofline that reduces rear visibility.

The interior on our car featured black leather seats and the latest Mazda MZD Connect system, one that betters an already good system. More on that shortly.

The vantage point behind the impressive steering wheel is one of European matching opulence. The multi-layered dash is covered in soft leathery-type material, while the centre console is relatively minimalistic. With simple air-conditioning controls and an uncluttered instrument cluster.
Missing is a more sophisticated turbo engine found on BMW, Audi and Volkswagens hatches for example. But that’s not to say performance is blunted, you just need to apply some more spirted pressure to the accelerator, however that will soon see fuel economy leave the claimed figure well behind.

Handling is fantastic, I’ll admit on my way home on the EFTM Proving ground you can watch here; I did notice one thing. The rear end is a little basic in the way it responds to changes in camber, quick direction changes and overall confidence. That can be attributed to a more simplified rear-suspension set-up, that rids the car of a multi-link system to a simple torsion beam. I don’t think many will notice this, but I did and that was before I actually knew about the change.

But overall this is a slick machine, with a seamless transmission, great grip and is now a very cloistered drive. The ride is a touch firm, you really will feel an unexpected pothole. When I say hard, it will jolt the entire chassis.
One other thing that adds even more flair is the 12-speaker Bose system. The sound is great and the beautiful detailing on the metallic speakers in the doors looks fab.

The G25 four-cylinder 2.5-litre petrol engine produces 139kW at 6,000rpm and 252Nm at 4,000rpm. A six-speed transmission with paddle shifters and a sports mode sends power to the front wheels.

This is where your money goes the extra yard. Some of the goodies include a head up display, radar cruise control, heated steering wheel, and a 7-inch TFT LCD colour display on the instrument display.
Infotainment is showcased via an 8.8-inch screen that lacks touch control. However, it is run by the excellent MZD Connect system that uses a rotary dial and surrounding buttons. Plus, as with many cars many functions are replicated via steering wheel buttons anyway.

Connectivity wise Apple CarPlay and Android Auto are standard, as is DAB radio. Although my wife lamented the fact switching between the big two and MZD Connect is a tad glitchy.
Safety is covered off thanks to, by my count, at least 14 systems that range from a 360-degree reversing camera, Autonomous Emergency Braking, traffic sign recognition and cross traffic alert.

For a hatchback that does lack room in the rear the Mazda G25 Astina is not cheap. Before on-roads you’ll need to fork out $37,990. But you can take off $1000 of if you want the rarity of a six-speed manual. This will be a tad over $40,000 once you escape the clutches of the dealer.
Fuel economy is rated at 6.3L/100km which I think is near impossible to achieve. I averaged up to 9.5L/100km, my wife 7.5L/100km but she only drives on motorways. It’s backed by a five-year unlimited warranty.

It’s the sexiest and most premium hatch in the segment.

The Mazda G25 Astina is the perfect blend between true luxury and price. You could spend a stack more if you’re a brand snob. There’re some imperfections, such as rear visibility and a ride that’s a tad stiff. But overall, it’s a stellar effort. I’ll give it an 8.1 out of 10.