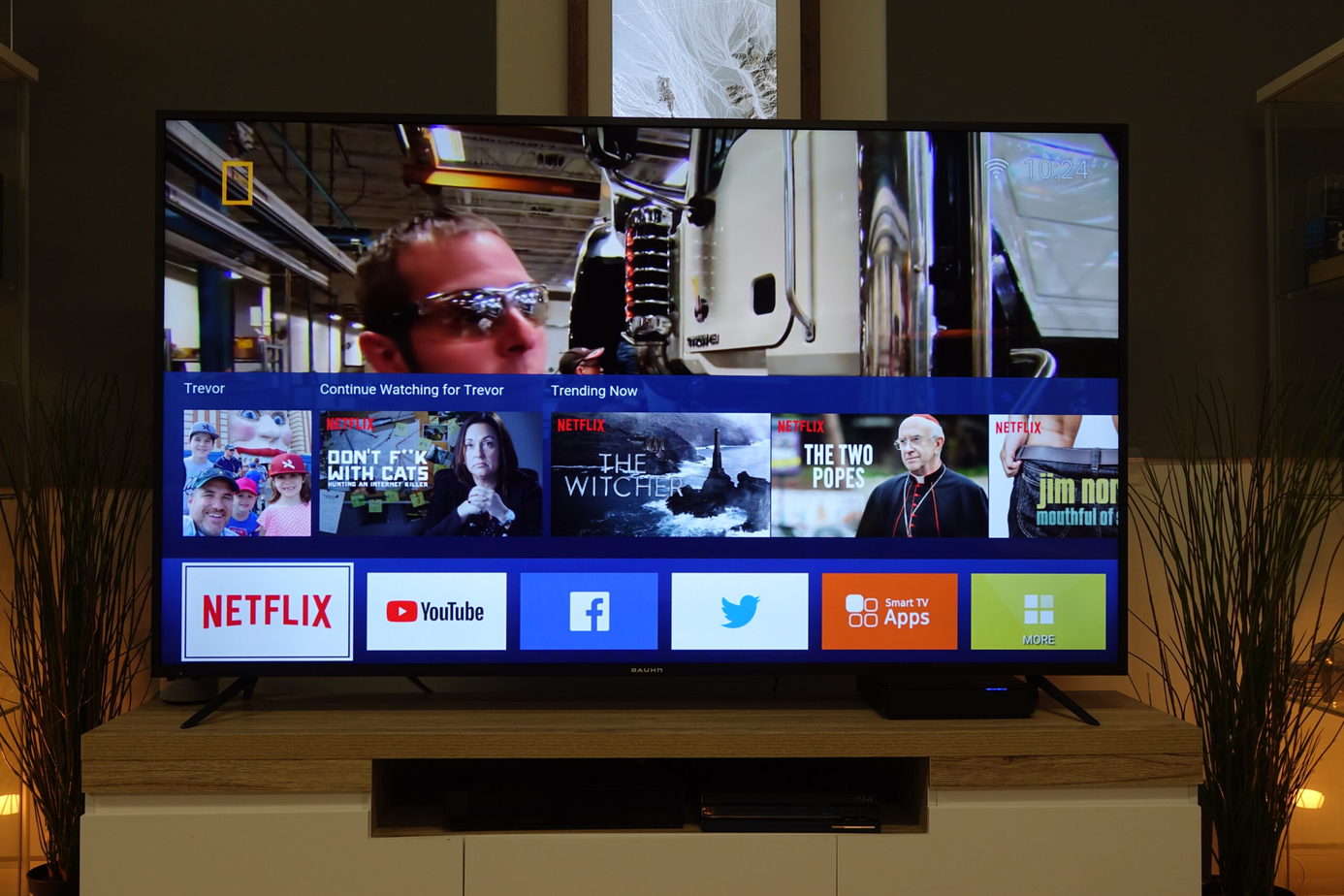 There’s a bunch of things that you can normally assume about the more affordable TVs on the market, this 75 Inch Bauhn Smart TV from Aldi challenges a lot of that – I’m impressed.

I’m fortunate to have a 75 Inch TV here in the EFTM office from a major brand which is just 12 months old, so putting this Bauhn TV side by side was my attempt to put the price in perspective fast.

But it didn’t. Sitting alongside a SuperUHD TV from LG I wasn’t left disappointed by the Bauhn TV.

John and I sat and watched a bit of the Ryan Reynolds movie on Netflix. Fast action, lots of sound, colour, movement.

The first and most critical thing I noticed was the blacks. Bing a wider aspect ratio than the TV the picture on Netflix was presented in letterbox mode – with a black bar top and bottom of the movie itself.

Normally in that scenario, you get a greyed effect, or even some light blooming from the movie into those black bars. Not so on the Bauhn TV from Aldi.

In fact, the LG had a much greyer appearance than the Bauhn. That’s not to say the Bauhn picture was better – on the contrary, the colours on the LG were more natural, on the Bauhn they seemed overdone. Fiddling with the settings helped a bit – perhaps with more time I’d dig even deeper, but it was when I set the TV up in our office loungeroom that I realised that wasn’t needed.

On its own without another TV right beside it – this was great. Frankly, the thing is too big for our viewing distance. Sitting 2.5m from the TV it looks bloody awesome, but you’re darting your eyes around the screen to follow the action. Consider your room when considering a TV size!

While the picture could be better colour wise, when you consider this is a $999 75 inch TV – it’s insanely good.

Netflix is built-in, operating at 4K with HDR – pictures all look the duck’s guts.

Critically also, on the home menu, you are getting quick links within Netflix too – this is the kind of thing LG and Samsung have hung their hat on over recent years – so for the “cheap” SmartTV operating systems to be doing this is a big step forward.

YouTube also appears on the home-menu, though YouTube kids is also pre-installed, that should be front and centre not hidden under a “more” menu in my mind because YouTube Kids is a great app for families.

There is an App store, but ignore it, there’s nothing of note in there.

Get a Fetch box, or Telstra TV, even an Apple TV and plug that into HDMI1 and you’re living the life. 75 inches of big-screen glory and all your content ready to go.

I’d love for the remote to be more responsive, but you get used to the speed at which you need to operate things very quickly.

At $999 there should be none of these left on Saturday afternoon.

The only reason they don’t sell out is because people are ringing around looking for a mate with a big enough car to bring it home in.

Trump is making waves on social media – but a different style to his normal approach this time. This is actual change....

From the outset, I have to tell you these are impressive devices, so much so we’re going to subject them to a...