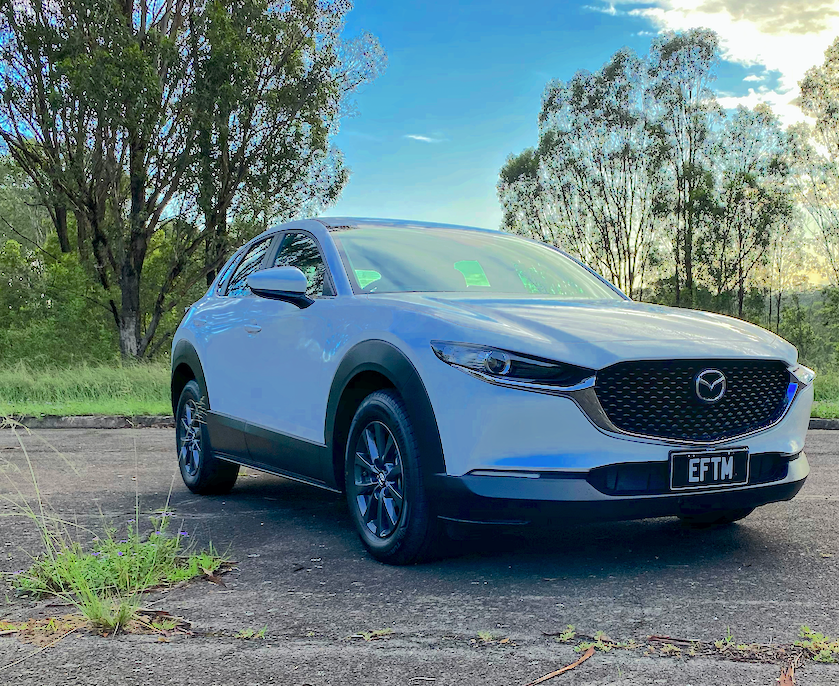 The Australian automotive scene is in tatters, as a result dozens of brands are also counting their own record blows. In fact, according to the Federal Chamber of Automotive Industries, the figures from March this year are the worst since 2011.

The CX-30 is a bit of a novelty, especially given it’s up against some solid competition. Firstly, the CX-30 is based on the Mazda 3 Hatch. In overseas markets there’s a CX-4, so I guess they ran out of numbers!

i’ve always wondered why on earth do people want compact SUVs?, but now I’m getting it! Easy access for the busy mum or an elderly person, and also so me come to think of it.

My as-tested CX-30 was the ‘Pure G20’, that had the 2.0-litre petrol four-cylinder. Aside from the Pure, there’s also the Evolve, Touring and Astina. But you may be keener on the 2.5-litre petrol that’s also offered. All-wheel-drive (AWD) is an option access the range.

I am constantly amazed how Mazda pulls off a super luxury feel. If

They’re like the BMW of Japan. The CX-30 is based around the Mazda 3, both sitting on the platform, which is not a bad thing.

The CX-30 is 100mm tall. The customer is likely to be a young couple who know they can mount a gutter if required. Plus, if you want to have crack on the tracks, the black plastic moulding around various low parts, especially the wheel arches, will save the day.

Would I take an AWD model onto a beach? Zero chance.

But after a few hours in the CX-30, there’s very little I can whine about. The figures aren’t impressive with 114kW on tap, but not until you hit 6000rpm. The other powerplant is a 2.5-litre petrol engine, with 139kW and 252Nm. All combos use a six-speed automatic. One that feels like a CVT sometimes.

The as-tested car here is an excellent display of attractive looks. Claimed fuel economy is 6.5L/100km. I couldn’t get under 8.0L/ 100km.

The CX-30 has plenty of competitors, the Kia Seltos, Toyota’s CH-R, to name a few.

On the road, on a nice warm evening drive I can tell you this – dynamically it’s secure, the steering is very fluid and very Mazda. The suspension is a basic set up, MacPherson struts and a torsion beam for the rear.

The 16-inch wheels help to mitigate some of the bumps, but the rear-end set up was clearly a cost saving measure. The result is a well set-up car, but when the road turns to shit, turn around!

Technology is great, the new Mazda CX-30 infotainy system is a little bland, but useful. Apple CarPlay is standard too. It’s great to see a Bose six-speaker sound system, in the base model. Other features include Traffic speed sign recognition plus what the brand calls “Smart Brake Support”. This allows the CX-30 to spot stray pedestrians or cyclists, the system also works when reversing.

The Mazda CX-30 needs AWD and the larger 2.5-litre engine. This is one for the inner-city type of person. But for weekends away I think the CX-30 is almost perfect. It’s a 9.5 out of 10 from me!