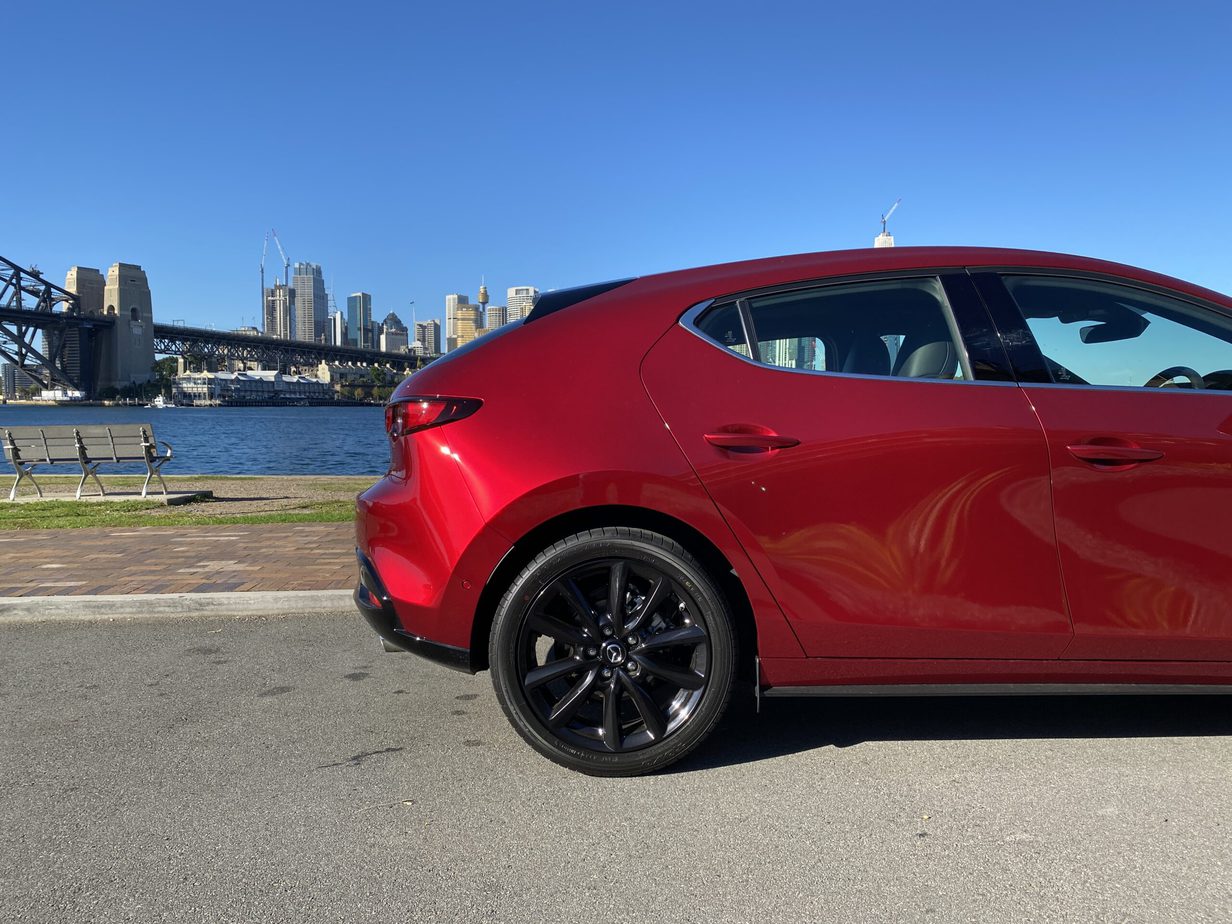 If you asked me which car won World Car Design of the year 2020, I’d have told you they’d be mad if they didn’t give it to the Mazda 3. Turns out, they did. Because it’s bloody stunning.

The good news is, you can have a car that looks this good for just on $30,000 – the bad news is you can also dip deep into Mazda’s lure and spend over $40k too – depends on the spec, the tech and the trimmings.

It’s a lot of money for a hatchback (or small sedan), but this investment pays off every time you walk out to your car – just look at it.

I love the hatch, like – Love. The rear end has been rounded off – no longer do the taillights stick out, they are part of the rear curve, and that’s a good thing.

They hooked me up with the G25 Astina in Soul Red Crystal – and black black wheels – damn, it looks fine. Take my money.

Inside you’ve got one of the most premium cabin designs and fit-outs outside of Germany, there’s a real feeling of quality here which helps at the price frankly.

A 12 speaker sound system from Bose means the music will entertain and you’ve got Apple CarPlay and Android Auto – though the screen isn’t made to touch, it’s a mile from the drive and is navigated by a small dial near the gear lever – I’m still not a fan, but – Mazda say – safety first!

But it’s the safety tech that really matters, 360 degree cameras help you park and reverse, optional in the lower models of course.

Radar cruise control makes a long drive easy, traffic support makes the stop start traffic a breeze and the car even has driver awareness monitoring to ensure you’re not drifting off to sleep. Fortunately, I wasn’t put in a position to test that.

This ridiculously advanced technology uses a camera (I think it’s the one next to the infotainment system) to detect sleepiness or inattention when driving by monitoring facial expressions of the driver.

If it determines a concern, it will sound an alert, while also prepping the automatic braking system.

That system is known as “Smart Brake Support” which keeps an “eye” out for possible collisions when you’re driving between 4 and 80 km/h. This includes pedestrian recognition.

Lane Departure Warning as well as Lane Keep assistance will ensure you don’t merge into traffic or drift outside your lane on the freeway.

Out on the road, it’s a breeze. A really smooth ride, a harder brake pedal than I’m used to, but you’ll be ready for that after a day of ownership.

I can’t imagine a Mazda owner having any complaints – especially if you’re stumping up for the higher end features.

It’s not the cheapest hatch you’ll look at, but after a test drive and a fiddle with all the features, you’ll narrow the Mazda 3 down into your top two at least.