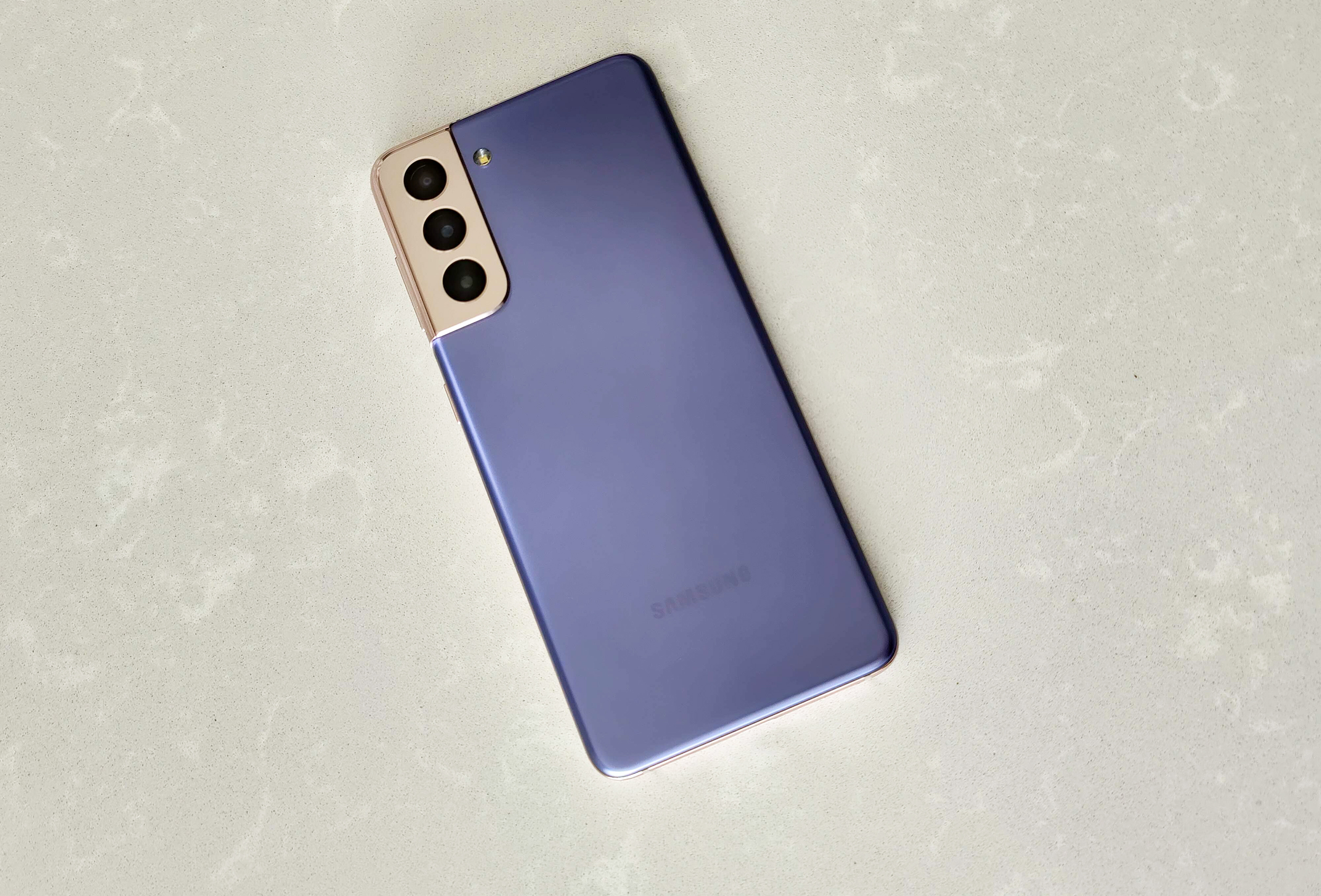 Every year Samsung releases their Galaxy S flagship range in the first quarter of the year.  This year they decided to release earlier than ever before — right around CES.  This is most likely to distance their release from any other phone releases that normally also happen around March.

So how does it stack up by itself? How is the camera?  Is it worth the upgrade and who should buy it are all questions I will attempt to answer below.

The design of the Galaxy S21 we received is stunning to say the least.  Borrowing from the Galaxy S20 FE, the back of the body is a polycarbonate material but that does not detract from the visual attractiveness in the least.

The Phantom Violet style we received is a lovely colour choice, very popular with my wife. The lavender colour with the gold highlights around the frame and camera module is a good looking combination and is subtle and very pleasing to the eye.

Speaking of the camera module, instead of a totally separate camera module, it is manufactured from the same material as the frame around the side of the phone.  Doing this makes the two fit almost seamlessly giving it a more stylish look.

The phone is smaller in the hand than what I am used to at just 71.2×151.7×7.9mm but Samsung have made use of every ounce of space with the 6.2-inch 1080P AMOLED display taking up virtually the entire front of the device — with a small punch hole at the top centre for the selfie camera.

Hardware-wise, inside is an octacore Exynos 2100 chipset with 8GB of RAM and 256GB of storage in the review unit — it is also available in a 128GB storage model.  The chipset is plenty fast enough although the phone is not the fastest I have used it is about as usual for Samsung — their software just tends to slow things down a bit.

Samsung do have a face unlock that most of the time.  It is one of the slowest and most unreliable face unlock methods I have tested and it is difficult to determine why — OPPO, OnePlus and realme all have faster, more reliable face unlock methods.  It is possible, and likely, that Samsung’s has more security than some of those but it is difficult to determine that.  Personally I like to pick up the phone, have it turn the display on by itself, see my face and automatically unlock all in one motion.   Not possible here.

The fingerprint sensor is once again underneath the display and it is a LOT better than last year’s iteration, most likely thanks to the new ultrasonic sensor from Qualcomm which supports a wider area.  It is still the slowest and most unreliable in-display fingerprint sensor I have used — it seems the optical fingerprint sensor used by other manufacturers is faster and unlocks every time you place your finger on the sensor.  Once again it is most likely be due to the added security in Samsung’s model — I have had an optical sensor unlock a phone even though I was wearing medical gloves at the time…

How good is the camera?

The more affordable Galaxy S21 comes with just three camera lenses on the rear — a 12MP primary sensor, a 12MP ultrawide sensor and a 64MP telephoto lens. This year the camera module sticks out a lot less and it sits relatively comfortably on the table without ricking all over the place. Although the S21 lacks the camera hardware of the ultra it is still extremely capable as you can see below.

One of the best things about the Samsung camera this year is the software. Back again is Single Take which takes a variety of pictures and video clips with a single capture of a few seconds. This allows the Samsung software to decide what it thinks is the best picture possible and what type in that scenario.

The AI scene detection is also great which tells the system what you are taking a photo of and adjusts the settings on the fly — if it thinks you should have something else selected to take the photo then it tells you. My only issue with this is that it may tell you you should use the food mode for example — but it does not give you a quick shortcut to that mode.

Best shot is also a great AI feature that shows you where you should centre the image capture to create the best picture — this is great for those of us who are very-amateur photographers.

Night mode has improved a lot over the years and the Galaxy S21 is no slouch here with it able to turn dimly lit scenes into seemingly bright days. It is difficult to demonstrate that in a review but each of the night mode images were taken in very low light is about all I can say.

For the pro users there is a Director’s Mode which gives you a view of all four camera lenses at once allowing you to choose which lens to capture the video — and you can change the lens used on the fly while the video is being captured.

All in all the camera hardware and software are fantastic on the Galaxy S21, much better than you would expect on their more affordable flagship.

While Samsung have improved their software immensely over the years it is still not the fastest around. The skin on top of Android 11 is relatively pleasing on the eye and is actually nice to use — although Samsung do seem to like to hide features behind a myriad of menus and buttons.

There are a vast number of software tweaks and features included by Samsung and I suggest you go through every single menu item because finding them by yourself is often extremely difficult given the sheer number of them. One thing for sure, however you want to use your phone the Samsung One UI will give you the opportunity to use it as you wish (once you change out their launcher.

My one suggestion to all users is to download (and pay for if required) a third party launcher. My go to is Nova launcher and although the Samsung launcher is improved, especially with the Google Discover page on the far left of the home screens, Nova and other third party launchers are far better, offer far more options and are faster/more optimised.

Power is difficult to come by

After Apple decided to remove the charger from the box of the iPhone 12 last year (for “environmental” reasons but no one is really fooled) Samsung made fun of them for it. Now Samsung have made a quick beeline to delete these ads and social media posts — unsurprising given that they have decided to also save themselves a few dollars and omit the charger from the box.

As someone who does not have a Samsung charger or a Qualcomm Fast Charge power adapter on hand this is a massive miss. I have several USB-C chargers — all powerful enough to charge my Dell XPS13 and my Surface Pro — but even these were unable to fully charge the Galaxy S21 in under an hour.

Why does anyone need a fast charger when most charge their phones overnight? If they are heavy users or just users who may struggle to get a full day of battery life.

With the Galaxy S21 on Adaptive Display (120Hz refresh rate) and display brightness on adaptive brightness at under 50% the battery barely lasted until 2pm after taking it off the charger at 6am. This is with only around two hours of screen on time. This is when a fast charger is handy — the ability to plug it in for about 15-30 min to top the battery up would be ideal but not possible with the S21.

Fast chargers can be purchased from all major retailers though such as JB Hi-Fi, Harvey Norman etc with a 25W charger (but using the cable that comes in the box with the phone — USB-A to USB-C) costing $29 while a 45W charger (including cable as it is a USB-C to USB-C cable) for $69.

The Adaptive Display is the issue here and changing the refresh rate to 60Hz did help the battery life but this is 2021 and 60Hz just won’t cut it anymore. Dropping the refresh rate to just 60Hz nearly doubled the screen on time to around four hours but still it was still a close run thing finishing the day with some battery life left on the phone.

Other companies can do higher refresh rates and not kill the battery so much — Samsung just obviously haven’t figured out the secret yet it seems. Once you have used 120Hz you just can’t go back — it is that much better. Hopefully Samsung can figure it out and release an update to improve it.

So should you buy it?

The Samsung Galaxy S21 is their more affordable flagship device of the series and as such you should not expect the features and hardware of the more expensive models. In saying that this device does everything you want it to.

It has Samsung’s usual high quality AMOLED display, wireless charging and option-packed software without missing much of anything that matters in everyday life — aside from a charger.

The camera needs its own paragraph and rightly so. The software is possibly the most helpful software I have used before and the imaging hardware produces some amazing images — albeit with only three rear lenses.

The only negatives I found was the poor battery life when running the phone at the amazing Adaptive Display (120Hz at times) and the lack of a charger included in the box. I would suggest that you do not use Adaptive Display and to be honest Samsung should not have included it because once you use it 60Hz will not be good enough for you anymore. As for a charger you can buy chargers and unless you have one from an S20 I suggest you fork out the money for one.

If you want the more affordable latest flagship from Samsung with a camera that is excellent I can recommend the Galaxy S21 for you and it comes at a much more attractive price than the Plus and the Ultra models.