At CES this year, ASUS ROG (Republic of Gamers) have unveiled their first new models of 2022 offering updates across their STRIX, Zephyrus, TUF and even a new ROG Flow convertible.

ASUS has announced some big updates covering all ROG Laptops, with both Intel and AMD models equipped with DDR5 memory, a big boost which ASUS says sees an up to 50% improvement over DDR4. ROG Laptops will also come with both Thunderbolt 4 and Wifi 6e and Dual PCIe 4.0 SSD.

Starting off, the ROG Strix and ROG Strix SCAR models are for gaming enthusiasts, with the Strix SCAR specifically designed for esports enthusiasts. The Strix range will come standard with a 90Wh battery and 100W USB-C charging, as well as WiFi 6E and 2.5G LAN for excellent connectivity. 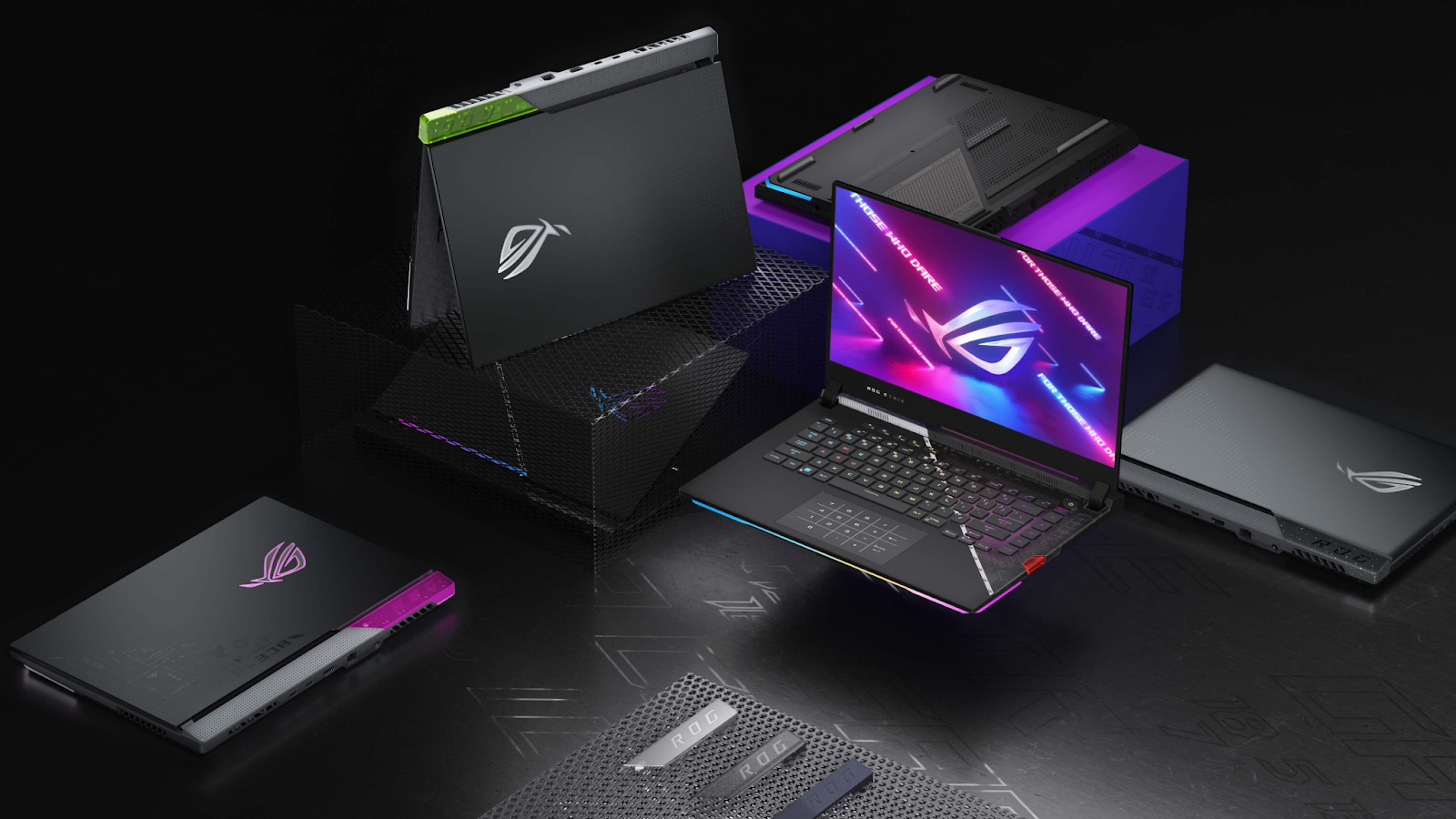 ASUS has also refreshed their popular Zephyrus line of laptops with updates to the G14, G15 and M16 and launched the new Zephyrus DUO 16 with dual-screen.

For fans of the Zephyrus G14, which ASUS tells us is their most popular gaming laptop, ASUS is adding in the latest AMD Ryzen 6900HS Processor and pairing it with the new AMD Radeon RX 6800S  with 8GB GDDR6 memory. You’ll also get options for up to 32GB DDR5 4800MHz memory and up to 1TB PCIe 4.0 SSD.

The laptop now includes a 14-inch FHD panel with 144Hz refresh/3ms response in 16:10 aspect ratio almost removes the bottom and side bezels, yet still manages to pack an IR Camera and Web Camera in for Windows Hello support. The display is also now brighter, up to 400 nits, with a dual-mode offering up to 500 nits.

ASUS has also updated the AniMe Matrix Light display on the rear of the LCD now has 14,969 precision CNC milled holes with 1,449 mini LEDs for higher resolution and brighter

ASUS’ dual-display laptops using their ScreenPad Plus technology are an innovative way to add more screen real-estate, in a way that adds value to gamers play time.

The new ScreenPad Plus now slides up and back, bridging the gap between the panels and creating the illusion of a seamless panel with only a few mms of bezel at the top.

The new Zephyrus G15 and M16 are getting all the bumps including a processor bump for the G15 to an AMD Ryzen 9 6900HS Processor, while the M16 will see a bump to a to 12th Gen Intel Core i9-12900H Processor. These two models are also getting updates which support Wi-Fi 6E and DDR5 memory.

Last year, ASUS surprised gamers by offering the Flow X13, a laptop that could double as a tablet. This year, they’re launching the Flow Z13, a gaming tablet that can also turn into a laptop.

The tablet comes with a kickstand built-in so you can keep it in place, and of course you get a screen-cover keyboard included, but you can also attach any keyboard, mouse or gamepad you want with the tablet offering USB-C or USB-A ports as well as an XG Mobile interface to connect to the ASUS XG

EFTM’s coverage of CES 2022 is supported by Intel, Vodafone, LG, Samsung and Hisense.

BMW’s electric vision – Driving the BMW i4 and BMW iX