After the usual round of leaks and massive amount of hype, Samsung has announced the new range of Galaxy S-series phones at their first Unpacked event for 2022.

Samsung will also be offering a range of limited-edition custom coloursfor the Galaxy S22 range through their eStore. The custom coloured Galaxy S22 handsets will be made-to-order with an approximate 3-4-week lead time for delivery.

Samsung is offering customers who pre-order one of three packs with the Galaxy S22 family – depending on which model you purchase. The packs for each model look like this:

Samsung is offering the Galaxy S22 family for sale through their eStore and retail stores across Australia.

When you pre-order a Galaxy S22, Galaxy S22+ or Galaxy S22 Ultra from Samsung online, you will receive a gift valued up to $337 in value. Samsung says you’ll also receive a ‘bonus Lucky Box surprise’ when you purchase a silicone case with a strap in the same transaction.

You can head over to the Samsung Australia website for more info.

Amazon is all in on the Galaxy S22, offering their own custom deals for pre-orders. If you pre-order a Galaxy S22| Galaxy S22+|Galaxy S22 Ultra through Amazon, you’ll receive a bonus Amazon Echo Show 8 (Black) as well as a gift redeemable from Samsung to the value of up to $337 – so basically what you see above.

To check out the Amazon deals on the Galaxy S22 family, you can head over to their landing page.

JB Hifi is offering pre-order gifts in the form of packs. Samsung is offering three packs – Travel, Power and Audio packs, with the model of Galaxy S22 you purchase defining what is in your pack.

For those lusting after the Vodafone trade-in deal (see below), you’ll also get trade-in credit from JB Hifi on your old handset. JB are offering an extra $450 off (via JB Coupon) for trading in a phone before 20th of March.

To check out all the Galaxy S22 deals at JB Hifi, head to their landing page here.

Just like Samsung online, Harvey Norman are offering up to $337 worth of gifts with the purchase of a Galaxy S22, Galaxy S22+ or Galaxy S22 Ultra.

The list of items you can choose from appears to be the same as the list above, or you can check it out yourself on the Samsung website.

You can see all the Samsung Galaxy S22 family deals at Harvey Norman on their website.

Of course The Good Guys are on-board with pre-orders offering the same range of accessory choices as their sister-store: JB Hifi.

I like Bing Lee, and they love the Galaxy S22 so of course if you pre-order a phone from the Galaxy S22 range in-store or online, you’ll get access to the choice of accessory up to $337 in value. The same table of accessories above applies, but if you want to see for yourself you can head to the Samsung T&Cs page.

If you want to see their range you can head to the Bing Lee website.

Last in the retail options is Officeworks, who bargain hunters will be very familiar with. Officeworks offers great pricing, but they can fall behind which is where their Price Matching Policy of ‘we’ll beat it by 5%’ comes into play. Find an item in-stock and you get the better price -5%, so keep an eye out for great deals!

Officeworks are offering the same $337 accessory if you pre-order a Galaxy S22 in-store or online. The bonus is via redemption from Samsung, with the full list of accessories available to view on their Terms and Conditions page.

You can head over to the Officeworks Galaxy s22 landing page on their website now.

The Galaxy S22 range is available to pre-order from Vodafone from today, with Vodafone going all out offering some great deals as well as bonuses like trade-in credit, pre-order accessory bonuses and of course massive data inclusions with their plans.

Vodafone is highlighting that under their new deals, you can nab yourself the ultimate Vodafone are doing some excellent deals on the Galaxy S22 range, offering bonus trade-in credit, pre-order accessory bonuses and big data inclusions on their plans.

Vodafone are also offering trade-in deals, offering a huge $600 bonus trade-in credit which could nab you up to $1320 of total savings when they trade in an eligible device and then sign up to or upgrade and stay connected to a selected plan.

If you want to update from last years S21 Ultra 512GB, you could get up to $720 + the $600 bonus credit when you trade it in – though Vodafone does say you will receive the same $600 bonus credit regardless of which eligible handset is traded in.

There’s a range of plans available through Vodafone, including the option to grab a Samsung Galaxy S22 Ultra 5G (128GB), with 40GB a month of Max Speed data for just

If you want to look at what else Vodafone has to offer for each of the three Galaxy S22 models, you can find their pricing matrix here: 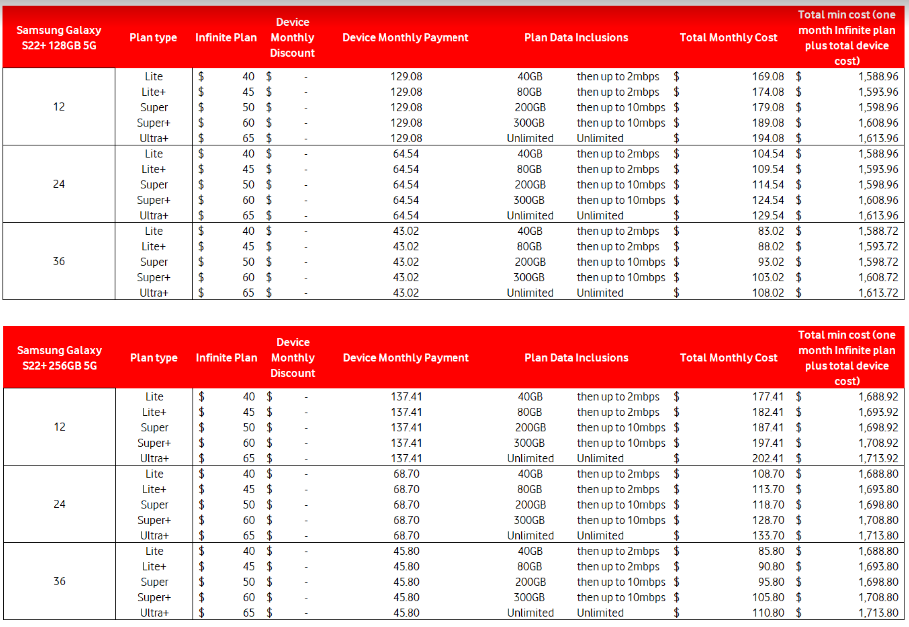 Vodafone are offering their customers the choice of one the three travel packs above, based on which handset you purchase – as well as the brilliant trade-in deals. It’s a great option to downsize older handsets – but save in the process.

Telstra is of course ranging the full line of Galaxy S22 handsets outright, or on plans over 12, 24 or 36 months. Telstra is also offering a price match guarantee, saying if you find a better price within 7 days of receiving your new, eligible phone from Telstra and they’ll credit the difference to your bill – not bad.

Telstra has a good array of plans, so just choose the model of S22 you want, the length you want to pay it off over and then select yourplan.

Telstra are also offering pre-orders for the Galaxy S22 series, offering the choice of the same three accessory packs via redemption. Telstra are upping the ante with a bonus Galaxy Tab A8 (valued at $529) and 12 months of Disney+ when you sign up to and connect to a postpaid plan.

Of course Optus is ranging the Galaxy S22 series, with a range of plans suited to almost everyone. Optus is again offering customers who pre-order one of the three available packs shown above, as well as a nice little bonus offer.

The Galaxy S22 series will be offered on a range of plans from Optus, though they are highlighting specific deals for each model.

According to Optus, customers who pre-order one of the latest Samsung S22 series devices are also eligible to receive a free Galaxy Watch4 (Black 44mm) valued at $549 in addition to the bonus gift bundles redeemable via Samsung e-store.

In terms of pre-orders, Woolworths Mobile is also offering the Travel, Power and Audio Packs for each of the three models, valued at up to $337. 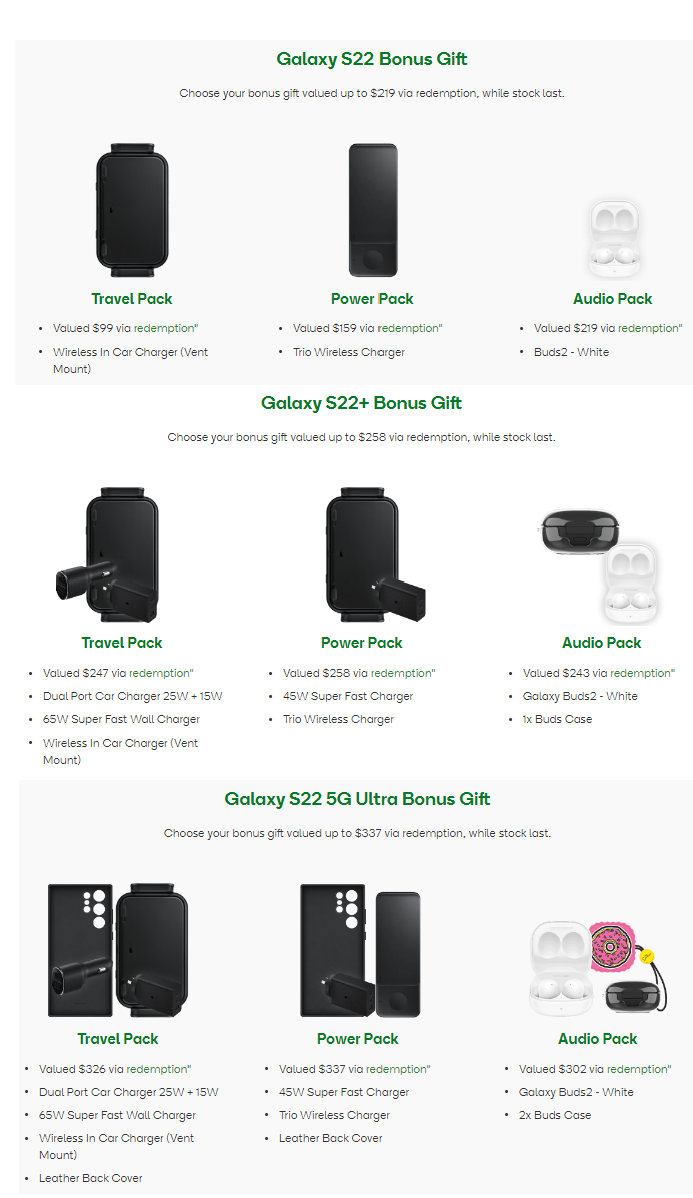 To check out all the Woolworths Mobile deals on the Galaxy S22 you can head to their website.

OPPO enters the foldables market with the FOLD N, launched alongside their new smartglasses, Air Glass