Kogan Mobile is BACK. This time rock solid with Vodafone

First time round in 2012 Kogan Mobile launched with great surprise in the industry, shaking up the price of low-cost mobile phone deals and amassing a customer base around 150,000 in just months.  After shutting up shop less than 12 months later, now just over two years later Ruslan Kogan is back with Kogan Mobile 2.0 with all the lessons learned from the nightmare of 2013.

When we first reported the launch of Kogan Mobile here at EFTM on December 12 in 2012 many doubted the accuracy of our report.  Sure enough, a day later all things were confirmed and we had ourselves a new player in the mobile space.

At $29 and with 6GB of data this was an amazing deal.  Now, this was a time when we had plenty of low-cost brand players in the market – including Red Bull Mobile operating on the Vodafone network as a “Mobile Virtual Network Operator” (MVNO).

Telstra was the carrier of choice for Kogan, though it was at much more than arms length.  Kogan had done a cracking deal with a company called ISPOne who had access to a 3G portion of the Telstra network.

Turns out, the deal was too good to be true.  Kogan had negotiated such a good deal that ISPOne couldn’t survive. 250 days later and Kogan Mobile was winding down.

ISPOne was the sole distributor of Telstra’s prepaid network and having gone out of business Kogan took them to court.  For customers, Kogan issued full refunds, but that still meant tens of thousands of customers were sent searching for a new plan and a new telco.

Overall this hurt the reputation of the low-cost carriers and since then only Amaysim have really survived as a low-cost player on the Optus network, operating alongside Boost which is a marketing arm of Telstra for low-cost calls and data.

Ruslan Kogan simply can’t announce a relaunch of Kogan Mobile without some serious network credibility.  Today he did that.  Standing side by side with Vodafone CEO Iñaki Berroeta to announce Kogan Mobile (which we’ll call Kogan Mobile 2.0 ok?). 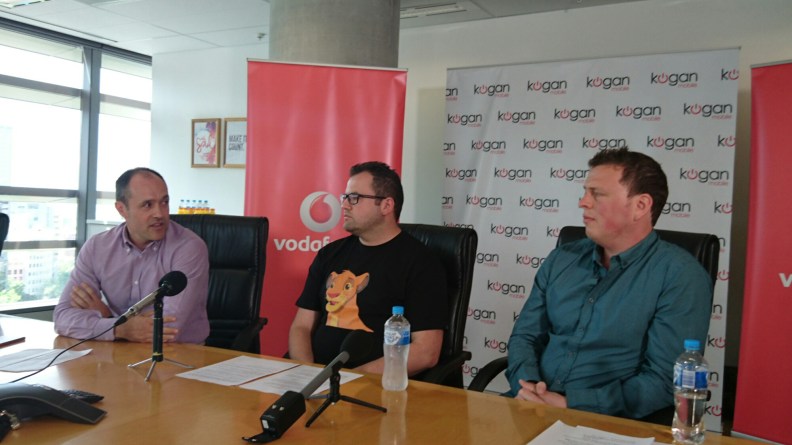 And in typical Kogan style, the deal is good – very good.

This time round, Kogan isn’t paying a third-party, Kogan is for all intents and purposes operating as a marketing organisation for new low-cost Vodafone plans.

Launching with 3G access only, EFTM understands that Vodafone is working frantically to enable 4G for the Kogan Mobile customers, expected early in 2016.

There are two plans.

Lets compare that to a couple of the big deals on the market from solid reputable brands.

Boost Mobile offer $40 recharges to get 3GB of data.  They also allow for 1GB of extra “bonus” data every Sunday, but that’s just a bit complex to compare, so lets park this one as $10 more expensive than Kogan Mobile

Of course, if you’re comparing that to the big-three, there’s no argument about the value.

Lets look at that another way. What’s the comparative price of just getting the same 3GB of data?

This is seriously cat-amongst-the-pigeons stuff.

Without doubt there will be plenty of people who were “burnt” by the original Kogan Mobile experience, but there’s one thing that lured them away last time and will do so again – that’s price.   Some will balk at trying again, others will rationalise with the learnings from the last time and understand that dealing with Kogan Mobile 2.0 is in reality dealing with Vodafone.  Voda are doing the activations, customer care – the whole bit.  Kogan is just marketing the deal to its huge customer base.

And don’t doubt again that Kogan will be throwing a SIM card into all the phones it sells.

Getting 150,000 customers again might not be too hard – challenging for an even bigger slice will come with time, something the first operation just didn’t get.

You might ask yourself why Vodafone would do this?  From where I sit, it’s simple.  Vodafone has invested billions into their network.  The old days of a bad experience are long behind them.  They now know they have huge capacity in their network and this is a way to gain large network customer growth without having to diminish the brand position they have built for themselves.

Let Kogan Mobile be the “cheap” mobile alternative, and be “powered by Vodafone”.  Just as Optus now have with Amaysim and Telstra have with Boost.  Only Amaysim really operates as a distinctly separate business in that sense.

From a business perspective, these low-cost deals mean that the ARPU or “average revenue per user” for a “Vodafone customer” will be high, while the network customer numbers will be higher though the growth of Kogan Mobile (2.0).

The simple question is – will you try it?

Your Tech Life Episode 220 Live from CES – Press Day: All the announcements