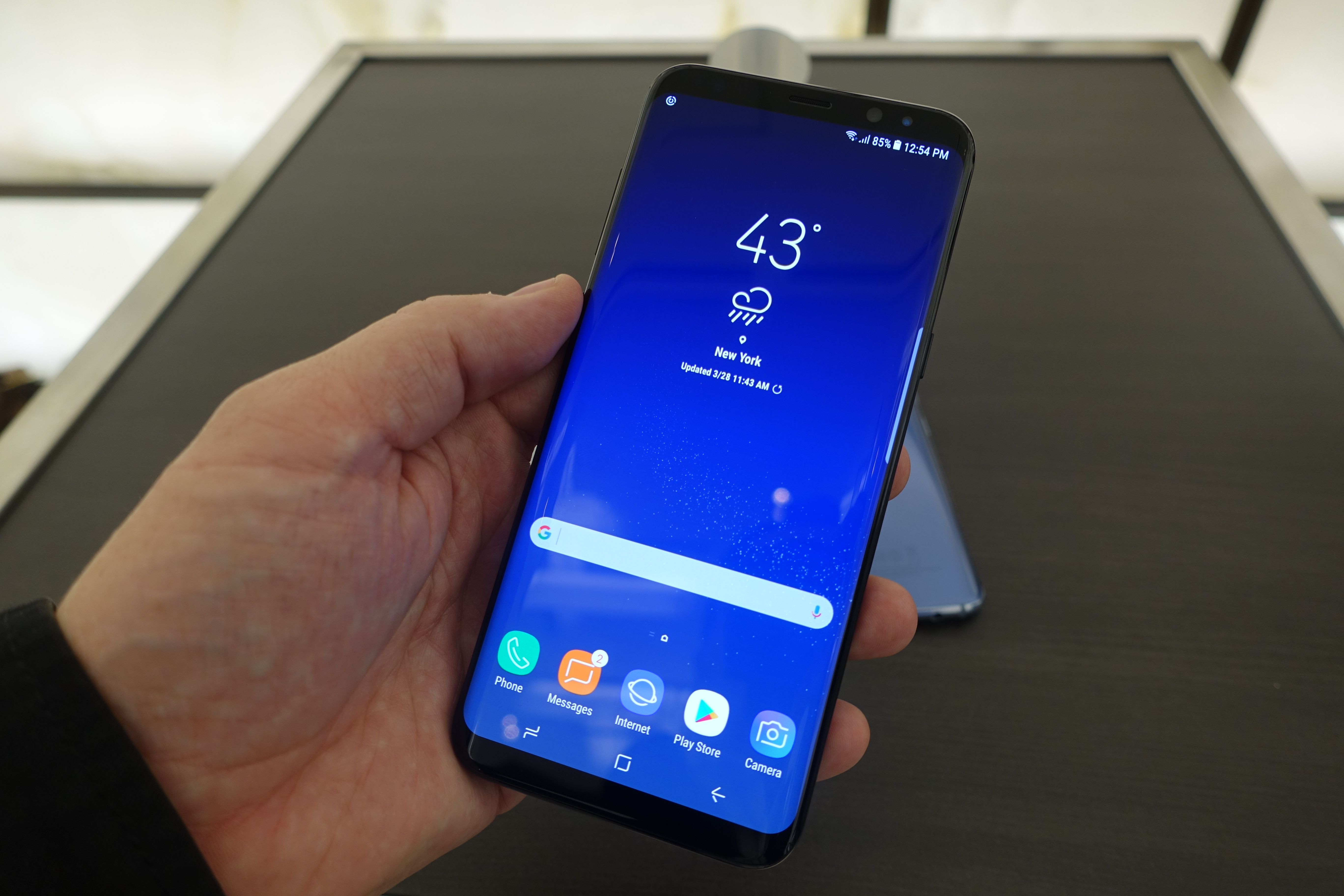 After weeks of rumours, and leaks, Samsung have today revealed their next flagship phones, the Galaxy S8 and Galaxy S8+ and they’re coming to Australia at the end of April. 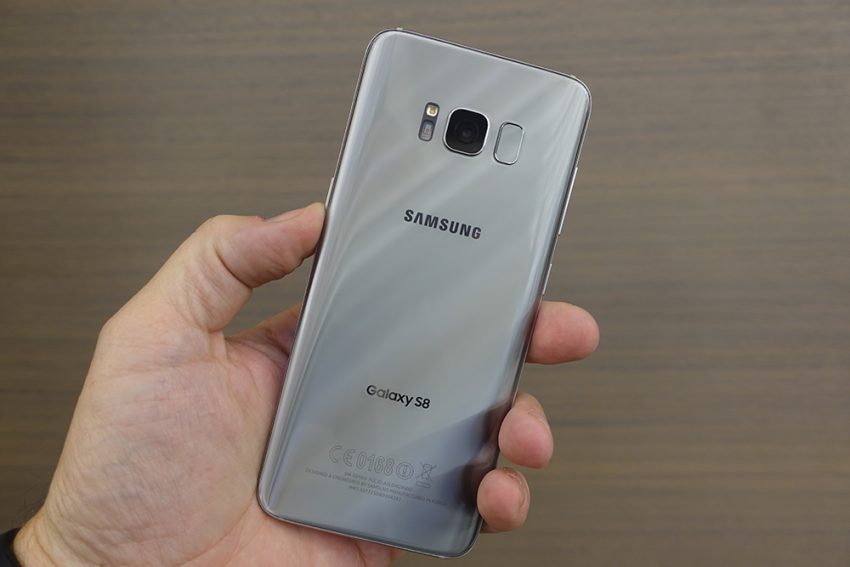 While all the attention has been and rightly so, Samsung’s terrible end to 2016 with exploding batteries in the Galaxy Note 7, it should be remembered that the Note range is a lower volume niche product, and has never matched the heights of the “S” series smartphones.  That said, Samsung have put those woes behind them with new battery and production plans and testing regimes to ensure they never suffer such a problem again.

And they need to, because people are going to want this product. 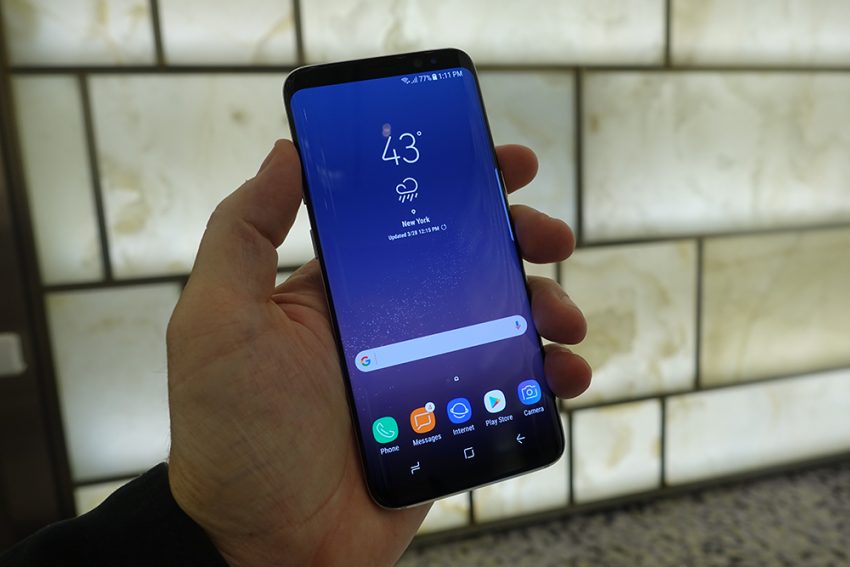 The Galaxy S8 has a 5.8 inch screen, while the S8+ has a 6.2 inch screen – though those measurements are almost impossible to compare to other phones on the market due to Samsung taking the same route as LG with the G6 and increasing the screen height to width ratio.

Samsung’s 18.5 to 9 ratio screens give them a “Screen to body ratio” of 83%, while LG’s 18 to 9 ratio is only quoted as “over 80%” – fair to say they are very, very similar looking phones when you see them in a dark room with the screen brightly shining. 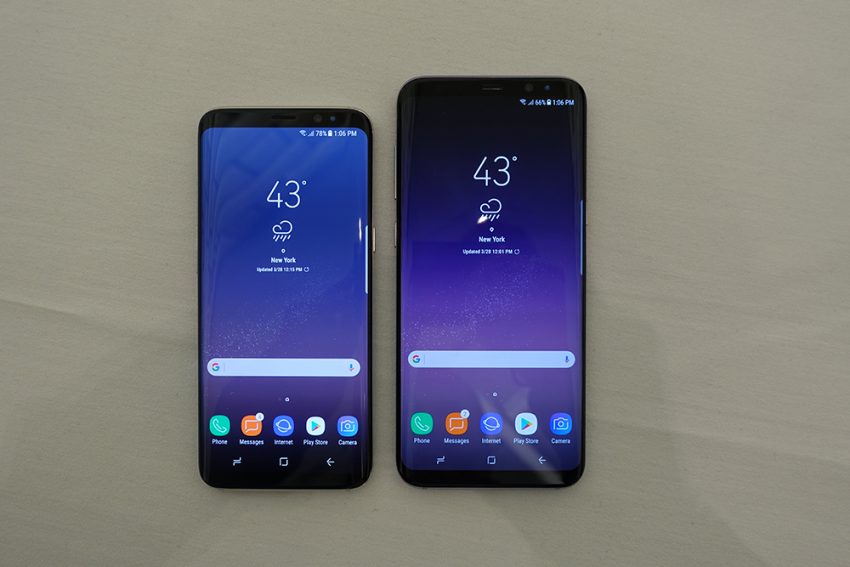 The advantage of this bigger screen is two fold.  Entertainment, and space. 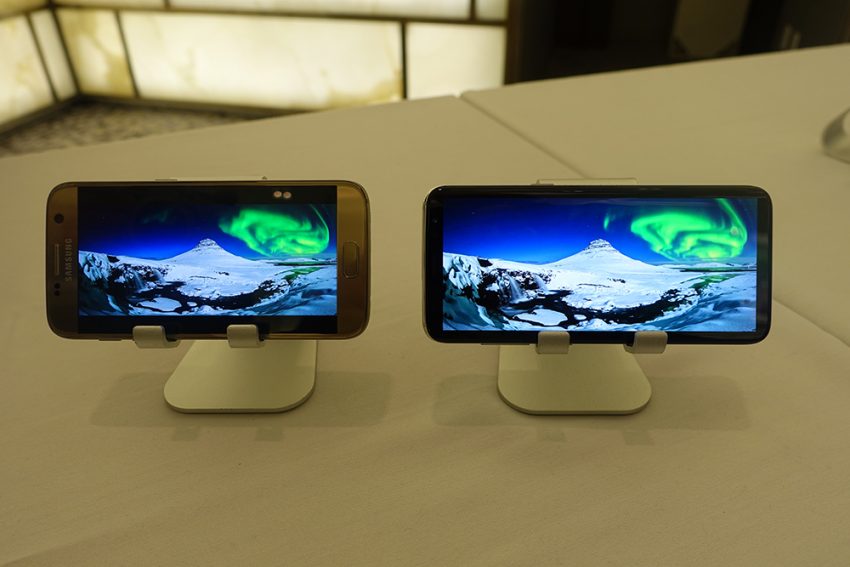 For entertainment, you’re getting a full cinema like experience without the black bars top and bottom of the picture. 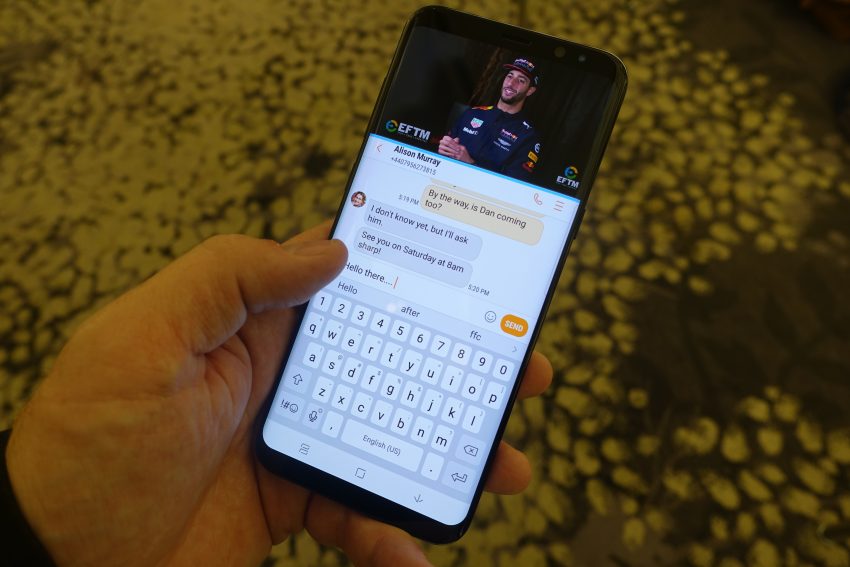 But in reality, the real selling point for this screen is space.  You can easily be watching a YouTube video, while typing a text message, and have space for the video, the keyboard and your messages all on the screen. 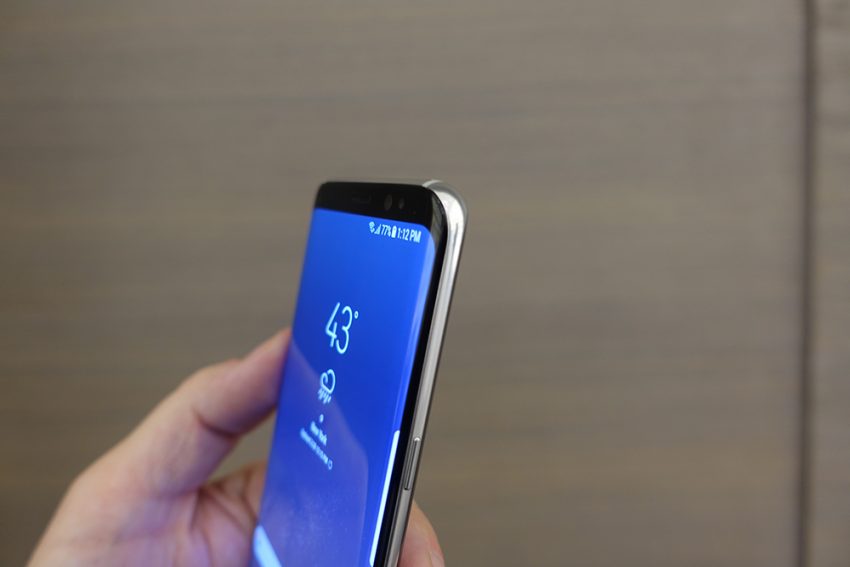 This space comes at the expense of the bezel or border top and bottom of the screen itself.  At the top all the speakers and cameras are squashed into a much smaller space, while at the bottom the physical home button is gone, replaced by an on-screen button which still offers some haptic feedback when pressed.

Removing the home button also meant moving the fingerprint scanner to the back of the device. 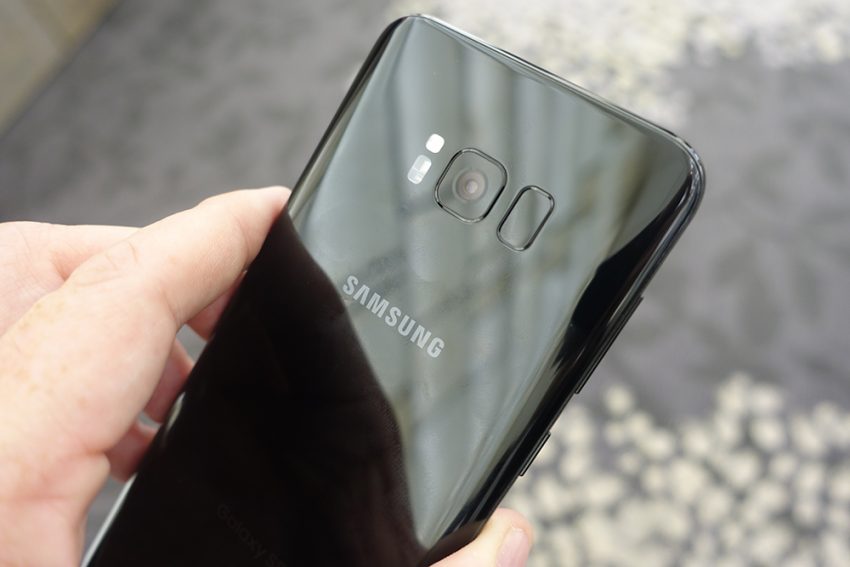 But Samsung would have you believe the Fingerprint scanner isn’t as important as before.  In terms of security, Iris scanning has it beat, and that’s back (after a short lived run in the doomed Note 7), giving you the ultimate security for your device.

The rear camera has been enhanced with new software, but it’s 12MP specs remain the same.  Out front though, the Selfie-camera is now 8MP with a F1.7 aperture and a smart autofocus using facial recognition.

On the inside the Health app has been overhauled, with features like doctor consults coming to the USA but for Australians you’ll see a new look easier dashboard for all your activity. 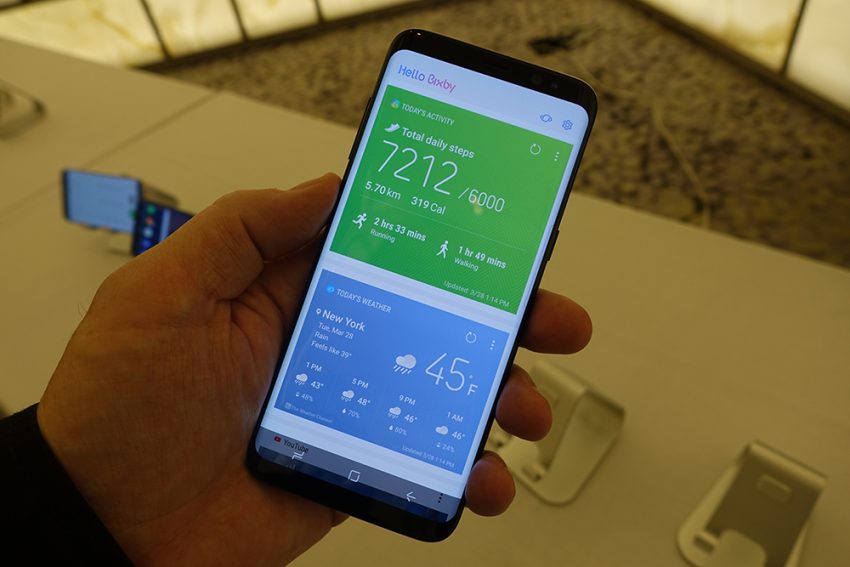 Tackling both Google and Apple, Samsung have included their own virtual assistant – Bixby.

Samsung say Bixby is more intelligent, offering a more complete user experience.  We’re not sure yet, in fact doubtful if Bixby will be available at launch in Australia, but it most certainly will come.

The idea of Bixby in enabled apps is to be able to do anything you can do with touch – with your voice. 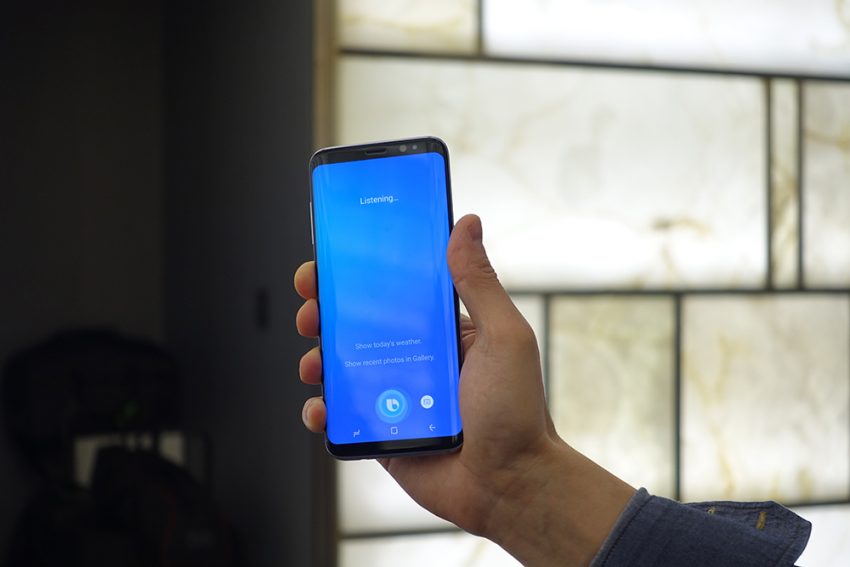 For example, in the Gallery application, you should be able to instruct Bixby to edit the photo, rotate it to the right and commands like that.  Samsung reckon the combination of possible commands in just that app alone equals millions of possible things you can do.

In discussing it with EFTM, it was described as being able to talk and type in a continuous manner, without having to leave the app you were in.  Though in the demonstrations I saw, a long press of the dedicated Bixby button on the left of the device still brought up a screen over the top of your work in which your commands were received. 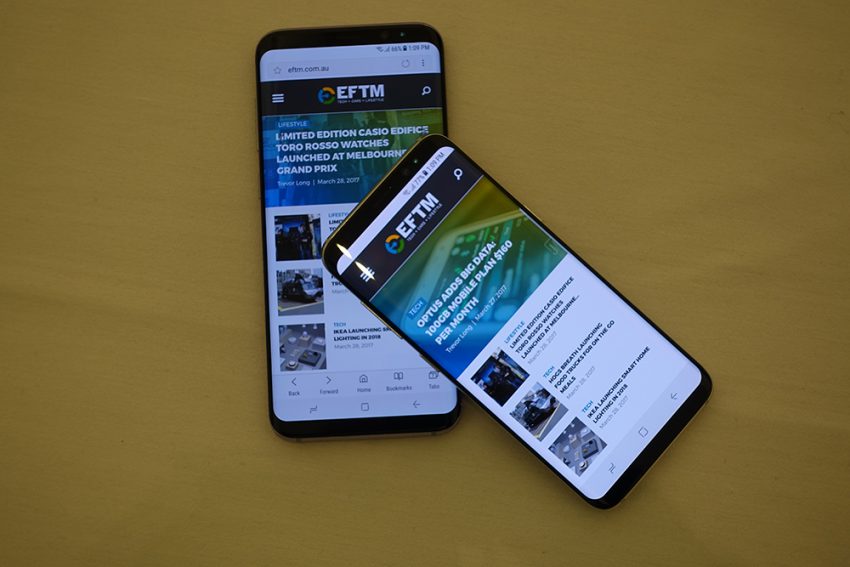 For true continuous usage, it should just listen without taking over the screen – but we’ll test that more thoroughly in the weeks ahead.

Bixby also has the ability to recognise objects using the camera.  Point it at a book, then click shopping to find that book online.  Point it at a plant and it might just tell you what plant it is.  This is early days, but it’s a big part of the future for these types of applications.

Honestly, the coolest thing I saw here in New York was the DEX docking station for the Galaxy S8 & S8+. 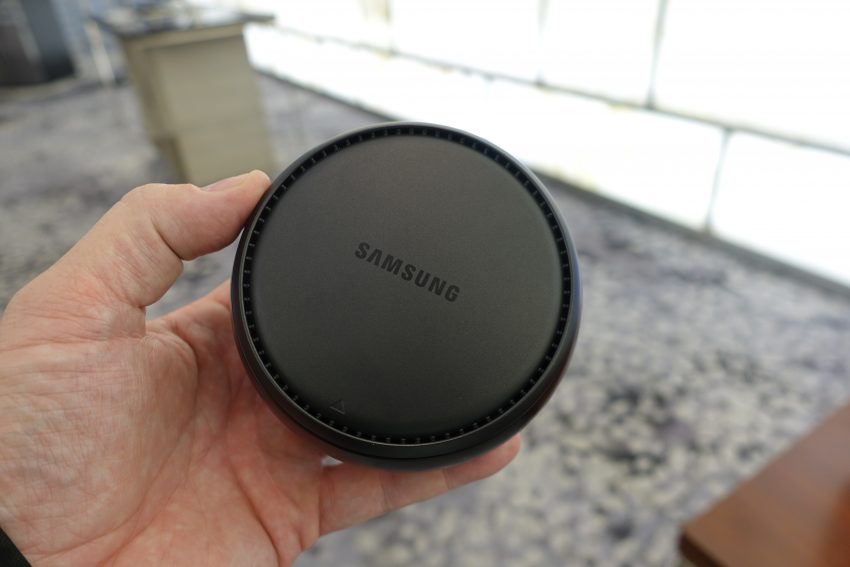 This small round box sits on your desk.  HDMI out to your monitor, USB for your devices or bluetooth for keyboard and mouse, and an Ethernet for internet.  Slide over the top and a USB-C connector appears for you to dock your device. 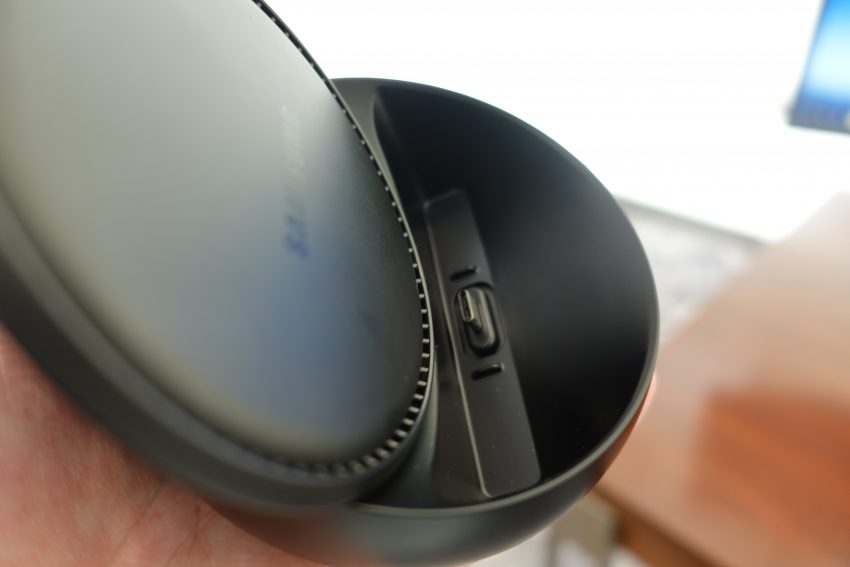 Once docked, you’ve got a working Desktop computer.  Running Android.  Apps run as windows, notifications appear in a lower screen task bar, text messages come through while you work, even phone calls on speakerphone.

And in a sign of how hard the device needs to work to do all this, the dock even includes a fan to cool your device. 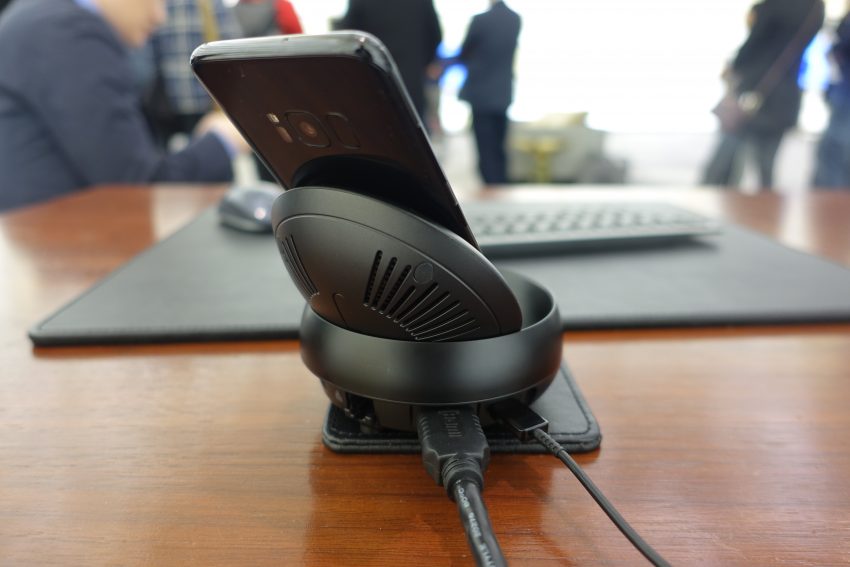 At $199, its genius.  Samsung even demonstrated running a Windows computer via a virtual machine – the idea of needing just one device in your life just got ever so real.

Microsoft’s Office suite for Android, and Adobe’s mobile products have been enhanced to operate in a more desktop friendly way when docked, and it’s very exciting to see. 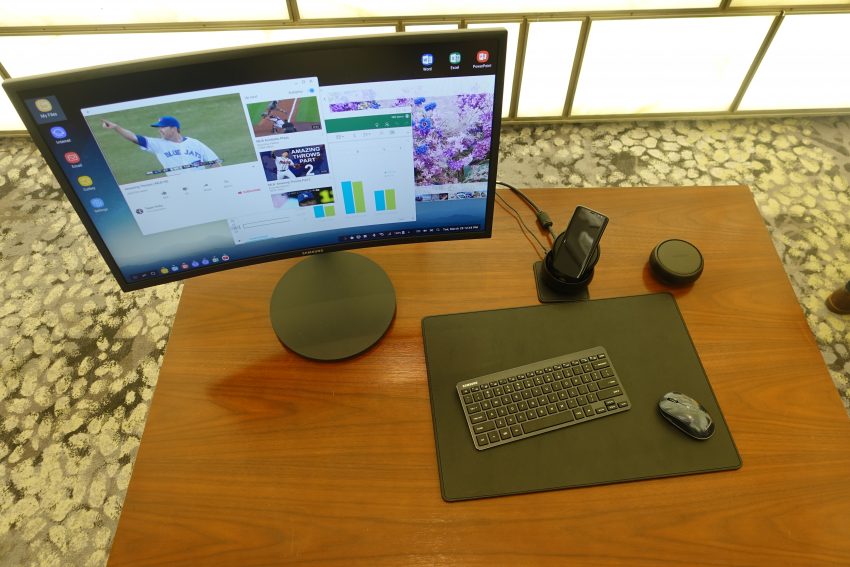 This is not new, HP did this a little over a year ago, but an enterprise device will struggle to get traction – this has a huge chance of corporate success.

The Samsung Galaxy S8 will sell outright for $1,199 and the Galaxy S8+ will have be $1,349 – both have 64GB on-board storage, expandable via MicroSD, and will come in Black, Grey and Gold in Australia.

Pre-orders kick off on March 31, and those customers will get the new Gear VR and Controller (RRP $199) bundled into the deal. 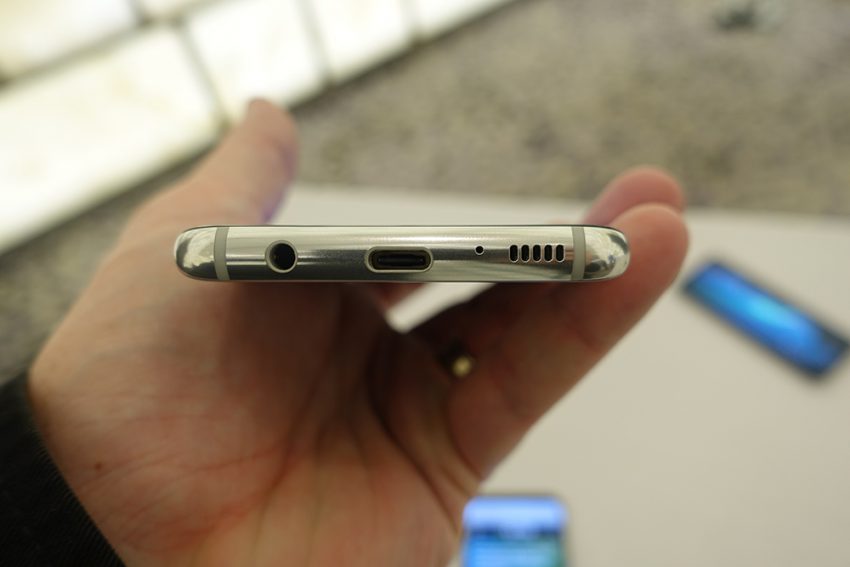 Not quite the free TV LG are offering, but we’ll see how people react.

If you order early, you’ll receive your phone and bundle on April 21, the first in the world (due to time zones).  Retail on-sale date will be April 28. 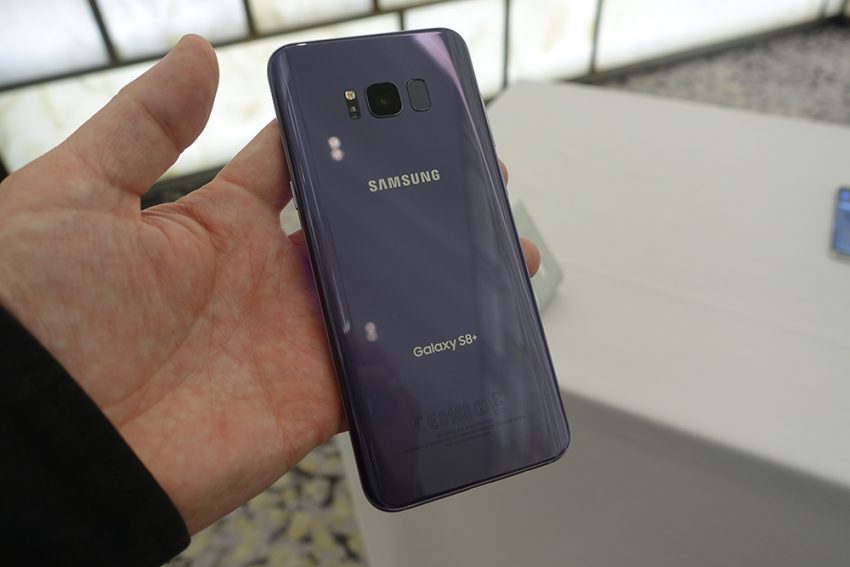 Trevor Long travelled to New York as a guest of Samsung, for full details read our commercial relationships and disclosures