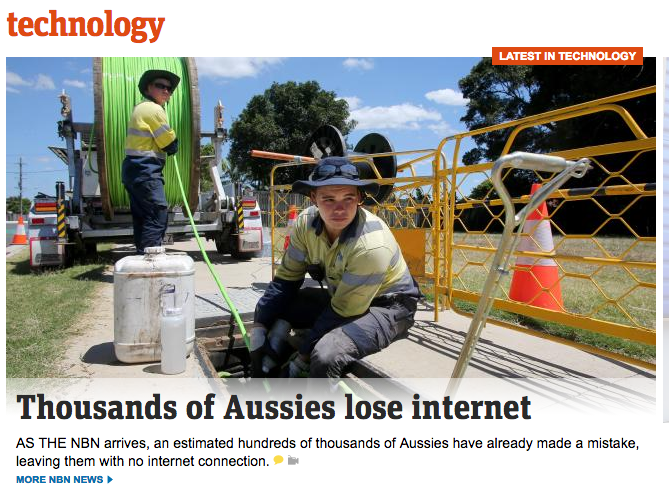 Look, we like to keep the language clean here, but come on – sometimes you’ve just got to call bullshit on the utter rubbish being printed/written out there. News.com.au is the thirteenth most visited website in Australia, and for that reason – things they write get a lot of attention.

I know this, because radio stations read stories there and ring me for comment.  “Can we talk about the hundreds of thousands of people without phone or internet because of the NBN?” – you what now?

All this comes from a survey of 2,000 people.  Now that’s a solid amount of people in a survey, but its anything but representative unless it’s conducted with consideration to the roll out of the NBN overall. You can’t multiply the result by 12,000 and assume it’s an estimate.

The NBN statement to News.com.au is pretty clear.

I’ve not called the NBN about this, because that would be a waste of my precious unlimited call rates.  Any halfwit can see this is utter bullshit and just fuels the NBN hatred and fear among consumers.

Here’s how the story should have been written.

A survey of 2,000 Aussies by a broadband comparison website has found a large number of people either not opting to connect to the NBN, not understanding the requirement to use the NBN for phone and internet services or flat-out ignoring the NBN in their area – leaving them without an NBN internet connection or phone line.

With NBN connectivity, each home in Australia reaches a “ready for service” state once the NBN has been installed and tested in the area.

In each case, following that date, the householder has 18 months to choose an NBN provider and enable a broadband internet service and phone line if they choose.  During this period every householder will receive countless letters from Internet providers and the NBN about their address being NBN ready.

Currently, 900,000 homes have reached the end of that 18 month window, with just 5% of those homes opting not to take an NBN service.  If that rate continues, some 500,000 homes in Australia will not have an NBN connection once the rollout of the network is complete.

Those homes are not all forgetting something, or missing the point, many may choose to rely only on mobile service for phone calls and not have a home broadband connection, or they may be covered by another broadband technology supplier.

It is though important for all householders to know that any existing broadband and phone services will need to be converted to the NBN once it is available in your area.

To check the status of the NBN roll-out in your area, visit the NBN website.

Of course, that wouldn’t work as well for clickbait now would it?