Back in March the Audi A5 and S5 coupé were launched, shortly thereafter the Sportsback arrived, now it’s time to unveil the next instalment, the Cabriolet. As previously reported the A5 is a totally new, clean-sheet design following the previous model’s 10-year reign. During that time, Audi sold 800,000 odd A5s across the globe with 135,000 being the topless version. Chris Bowen arrived in Adelaide this week for the Australian launch and attempted some serious wind in the hair action, if he had some.

As with the rest of the range the design has evolved without tarnishing the already beautiful A5 looks. In soft-top form, the side ‘Tornado Line’, enhanced wheel arches, power bonnet bulge and Quattro stance are all still there. Often a canvass cover can destroy looks but not in this case.

The car is now 47mm longer with 18mm extra legroom in the rear. It’s still a tight squeeze back there but it’s still a very viable four-seater. The boot offers up 380-litres of space but drops to 320-litres when the roof is lowered. The roof itself opens in 15-seconds and closes in 18-seconds up to speeds of 50km/h. The operation also offers a one-touch down function after you take off, to prevent kids inadvertently opening it while stationary. 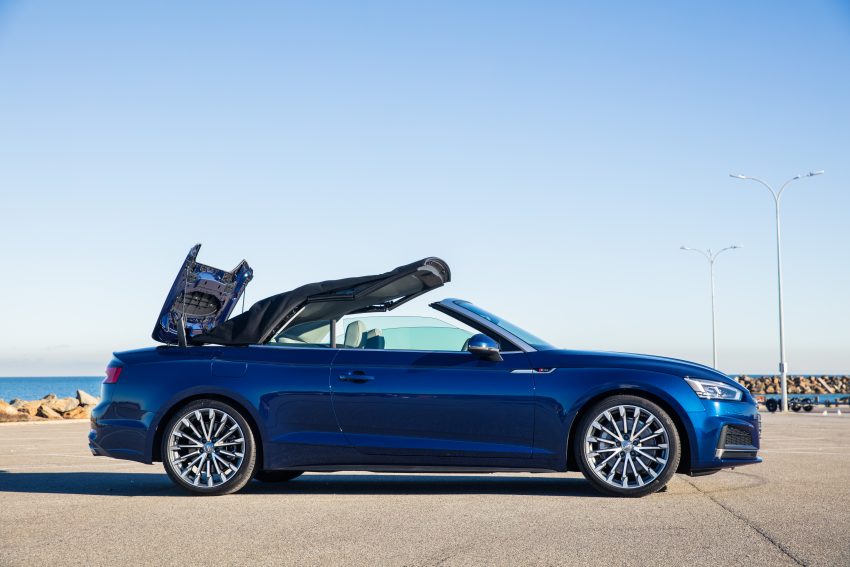 The roof now comes standard with acoustic lining, the wet and windy trip to McClaren Vale and ensuing coastal roads really showcased how handy that is. Carrying on a normal conversion with the roof up seems almost as easy as in a hardtop version. The side glass is also an extra 1mm thicker, along with side mirrors that further reduce drag and noise.

It’s 25kg lighter than its predecessor and 40 per cent stiffer, although the Cabriolet does lug around an extra 200kg over the Coupe. Convertibles simply need extra reinforcing, it’s only marginally noticeable when arriving at a corner at speed or when opening the vault-like doors. But the engineers have created a rock-solid car that feels just as tight as the Coupé. 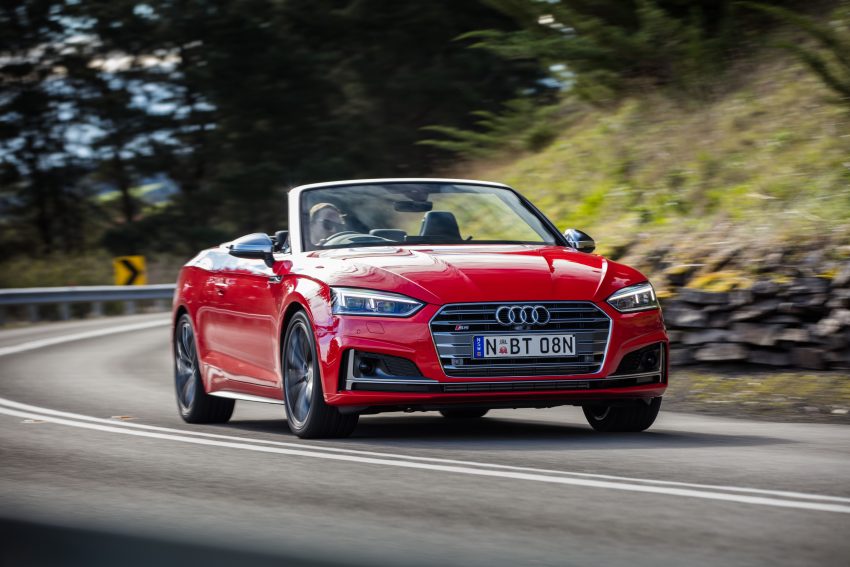 Other features unique to the Cabriolet include three in-built microphones in the seatbelt. They’re designed to capture your voice no matter how tall or short you are when the top is down and the wind is blowing. Importantly they also aid the voice recognition system and interaction with Siri via Apple CarPlay. The microphones are in both front seat-belts, in fact the technology was first introduced on the Audi R8 Spyder. 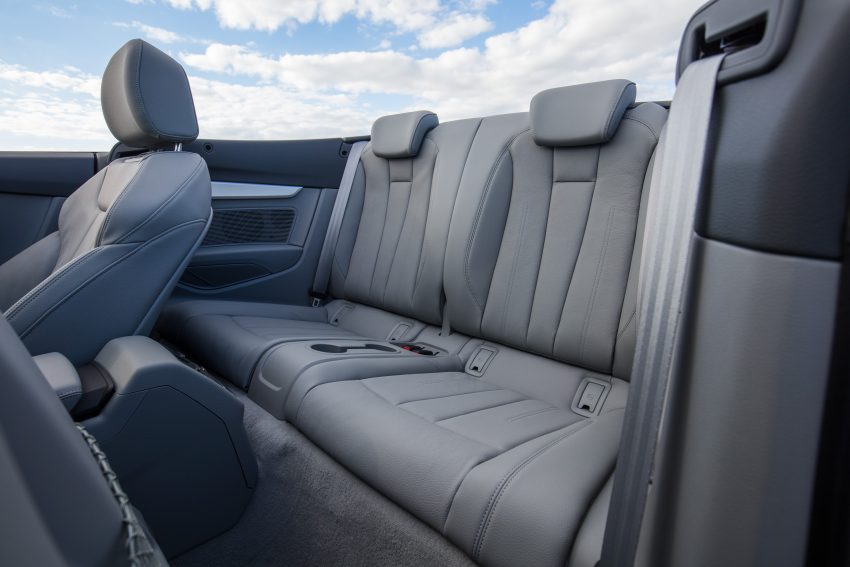 Neck-level heaters are standard, very important if your wardrobe lacks a scarf. Although the S5 does miss out on those as the amazing sports seats can’t accommodate them. You can elect to downgrade the seats, but who would do that?

There are three drivetrains on offer, all being petrol. Who wants to hear a diesel with the roof down anyway? The 2.0-litre engines score lighting quick seven-speed automatic transmissions while the S5 gains an extra cog thanks to an eight-speed tiptronic transmission. Fuel economy is only marginally up across the range over the Coupé.

The drive through to McClaren Vale, down to Cape Jervis and back to Adelaide again is really a dream run. If you’re yet to explore that part of the country, get there. Vineyards, rolling green hills and dairy farms meet the rough and tumble of the Southern Ocean and the start of the Great Australian Bite. 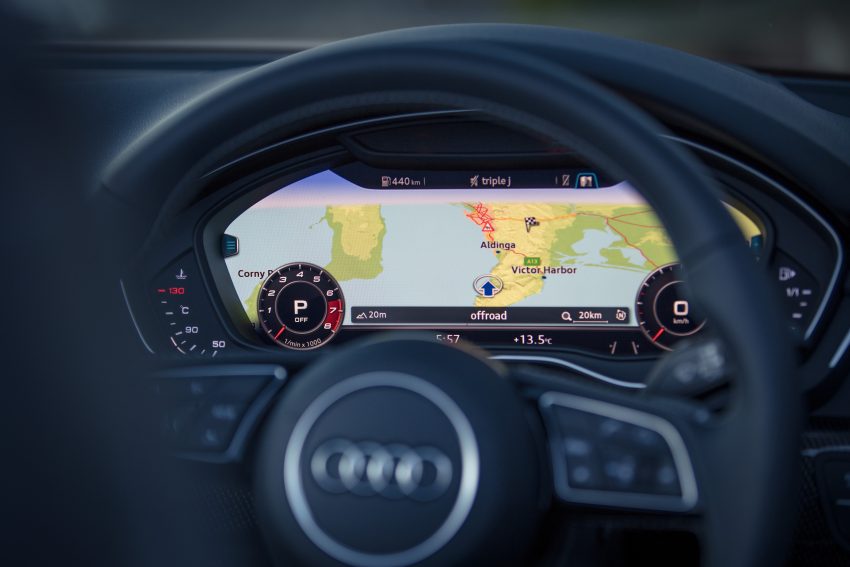 I drove each model over the 300 kilometres plus circuit and again walked away impressed as usual when it comes to the A5 range. Audi’s 2.0-litre petrol turbo engines are simply potent irrespective of the tune. You can literally have just as much fun in the front-wheel drive only base TFSI as the quattro driven and more powerful 180Kw TFSI. The engines both feature torque and power that appears at just the right time, all the time. For those who really like a superbly grippy and well set-up drive the optional adaptive suspension and quattro system for the mid-tier car is a must. It provides the bases for a car that almost seems invincible when driven in let’s just say a “spirited manner”. 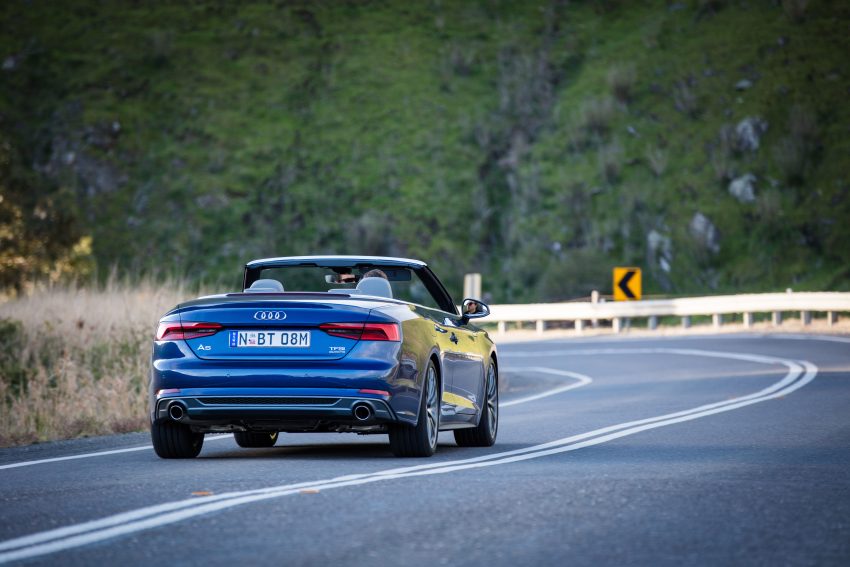 The S5 as usual is the headline act, at least until the RS5 arrives in December. There’s no better car in the S5 range to fully appreciate the sonorous soundtrack the 3.0-litre turbo V6 delivers. The cracks, pops and well, farts are a joy to hear. The engine note is a little artificial with the roof up, but the tune bouncing off cliff walls and blasting out of the back becomes far more notable in Cabriolet form.

The 0-100km dash takes just 5.1 seconds, quick by any standard. The optional quattro sports differential is a must for those who really want to corner like a madman. But aside from the obvious heroics the S5 can perform over and above the rest of the range, it’s still just a smooth riding and comfortable car to get around in. The ride right across the range is compliant, well sorted and never, ever jarring. 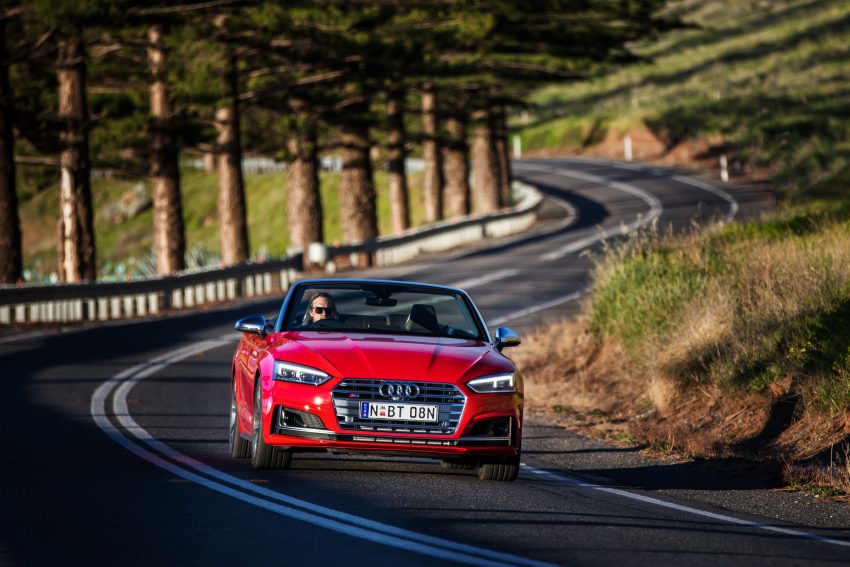 Again, the class-leading 12.3-inch Audi Virtual Cockpit is standard. The instrument cluster is a dazzling display of Google Mapping, customisable readouts and access to reams of information usually reserved for a centrally mounted display. The MMI controller navigates a tablet-style screen removing the need for distracting touchscreen inputs. 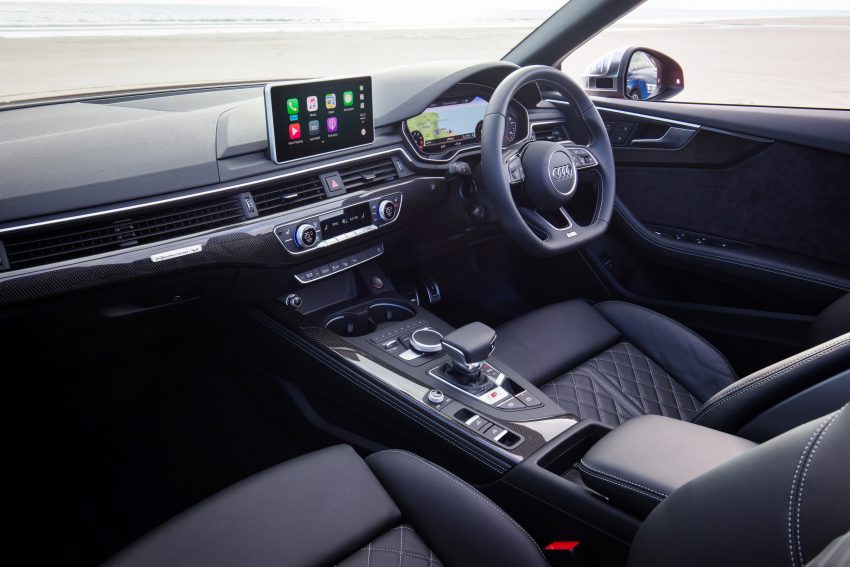 Also standard is Apple CarPlay and DAB+ radio. The interior layout is the same as the coupé and Sportsback, which is certainly not a bad thing. The safety tech on many cars these days is becoming a long and exhaustive list, put simply if you have a prang you’ve seriously stuffed up, or someone’s hit you.

But some real must haves include Audi’s Autonomous Emergency Breaking (AEB) up to 80km/h with pedestrian detection, Exit Warning that visually and acoustically warns you of say an approaching cyclist when opening a door. Multicollection brake prevents follow-on collisions after the shock of an initial impact. Plus being a soft-top it’s important to have a Rollover protection system that deploys two rollover bars from the rear headrests should you tip over.

Depending on how you look at it, pricing is down on the previous model but up when compared to the coupe and Sportsback variants. Before optimal packages here’s the pricing before on roads: 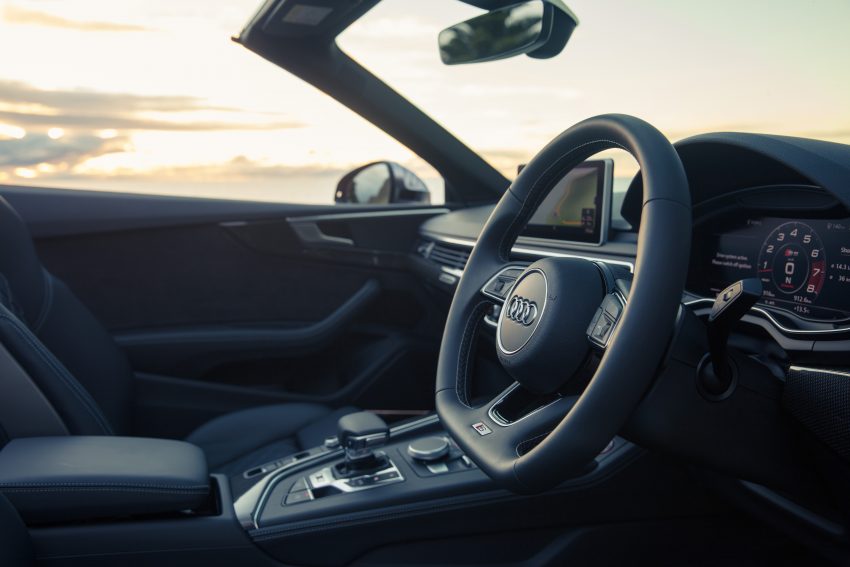 Rounding out the drive program was the S5 that skyrocketed to $129,952 due to red metallic paint, the $5,600 Tecknik package, wireless phone charger and $2,950 quattro sport differential.

It’s been a big year for the A5 range and we can’t wait for the crazy RS5 to arrive before Christmas. Audi expects the Cabriolet model to account for 10 per cent of sales in the range with about a 50:50 male, female split. Put simply if you’re into convertibles the Cabriolet is just a good a drive as the Coupe, if you can justify the extra spend. I award the Audi A5 Cabriolet the EFTM Distinction Rubber Stamp of Approval. 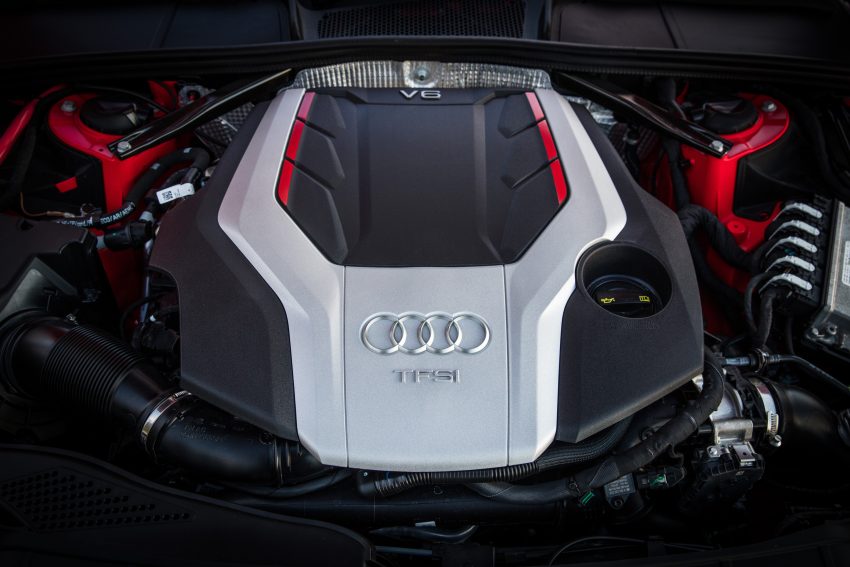 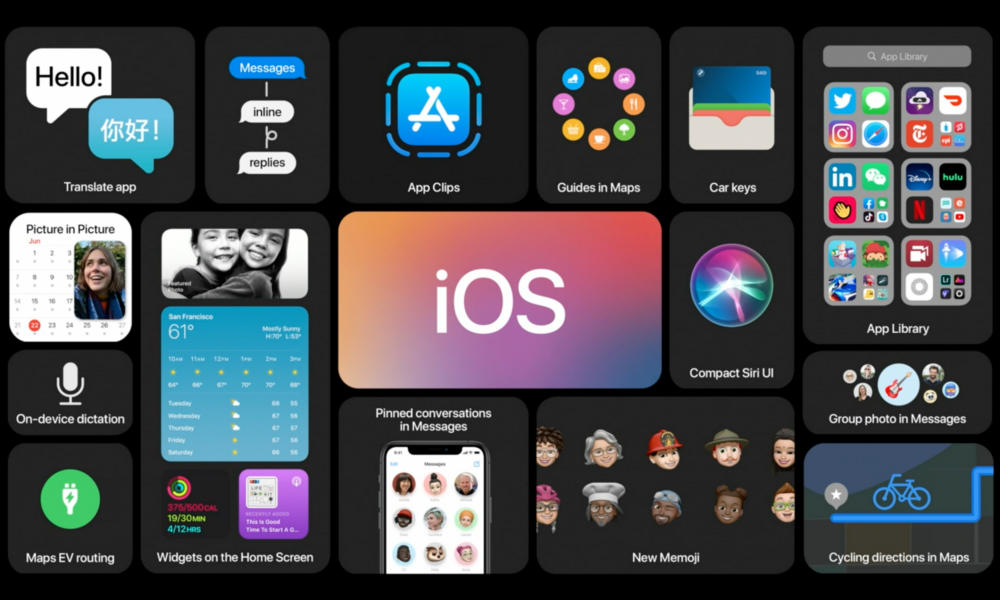 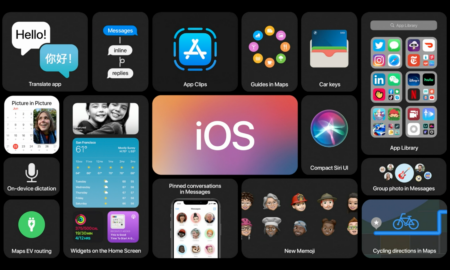 iOS 14 looks set to be the biggest refresh of the iPhone’s visual interface since the very first iPhone, packed with Widgets...