5 tips for iPhone photography – up your Insta game!

They say the best camera is the one you have with you. But if you want to lift your Instagram game, there are tips to making your iPhone camera even better.

When Apple launched Live Photos as a feature, the grand vision was that we would all start sharing still photos that also had a few seconds of “hidden” video attached. That never really took off, but for the keen iPhone photographer, Live Photos is the best way to cheat in capturing that perfect moment.

Step one: Turn on Live Photos.

Step two: Take a picture of something that moves – something like backyard cricket, your kids on their bike, a really active snail.

Step three: hit Edit at the top of the screen and then use the slider to find the perfect moment.

Step five: boast about your photography skills, and possibly buy some snail killer.

2. Accept your limitations, or at least the limitations of your phone.

The iPhone can take great pictures, but it can’t take every great picture. So play to it’s strengths, and with the lens so close to the edge of the case (and potentially the edge of a surface) you can get some terrific reflections.

Be a magpie and look for shiny objects – a shop window, a table surface or, as I often do, a council rubbish bin.

Use the reflection to give your composition that wow factor. Not cheap tricks like fake filters and mirror effects in photo editing apps. This all comes down to your willingness to look in a mirror and find something interesting. You know you can.

Okay, think of this as tip as two and a bit.

You have in your pocket a phone that can get closer to the ground than most cameras and, assuming it’s less than two years old, has at least some degree of waterproofing just in case you get a bit too close to a puddle.

With iPhone photography, a puddle is your best friend. The best way is to hold your phone upside down so that the camera lens is closest to the puddle.

This is probably the easiest way to make your Instagram photos really pop – and if you can’t wait for rain, you can always make your own puddle (probably best to pour water on the ground but we won’t judge you).

Just because it’s called Portrait mode, it doesn’t mean you have to take portraits.

Depending on your model iPhone, (iPhone 7 Plus and later) the Portrait mode lets you fake that shallow depth-of-field look that “real” photographers use.

But you can focus on something that’s not a person, and still get the effect (so long as you don’t have the iPhone XR which insists that Portrait mode is for people – sorry XR folk).

You’ll get the best effect on an object that doesn’t have slim, skinny little bits because the Portrait mode gets confused.

Try taking a Portrait mode shot of a bicycle wheel spokes and you’ll understand where it goes wrong.

If you have the iPhone XS, you can adjust the amount of depth of field, so that your background gets more or less blurry as you like.

Hit edit, then just slide your finger on the slider to get your desired effect before hitting Done.

Forget about the “courage” to ditch the headphone jack, face recognition and silly animated animal avatars, one of the best things Apple did to make the iPhone a much better everyday camera was to make it waterproof.

Again, this depends on your iPhone so don’t chuck your old iPhone 5 in a bucket to see how it floats. But if you have the iPhone X or later, you don’t have to worry about getting splashes on your iPhone.

Be brave and use your camera where sensible folk fear to tread. If you want to take it underwater, I would still recommend a waterproof case even though the iPhone XS has a IP68 waterproof rating which rates it as able to survive a dunking of 2m for up to 30 minutes.

But with that rating you don’t need to worry about using a iPhone XS in the rain. Just remember to make sure it’s dry before you charge it – water and electricity don’t get along.

The trick in shooting in the rain is try to keep the lens dry (wipe it on your shirt if it gets wet), and use your up volume button as a shutter if the touch screen is too wet to be effective.

Rod Chester covered Apple for more than five years as a technology writer for a national news network and has a keen interest in iPhone photography. He is on his sixth iPhone-only 365 project of taking one shot every day of the year. 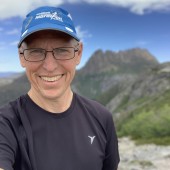 Rod is one of Australia's most respected Technology writers.  With years of experience covering the world of consumer technology there aren't many products Rod hasn't seen or tested.