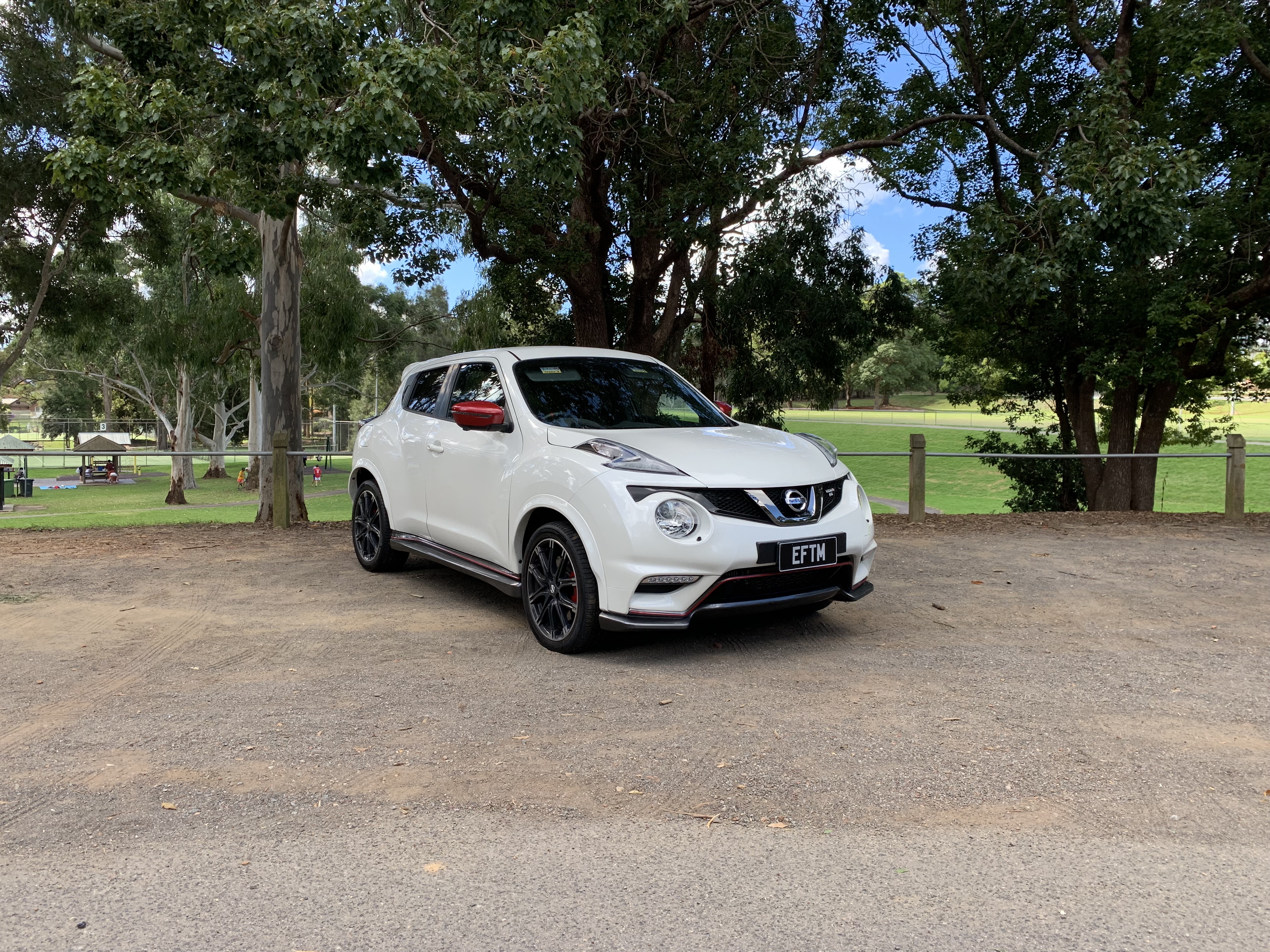 NISMO, it stands for Nissan Motor Sport. When I hear the term I think Godzilla and the mighty GT-R. I’ve just spent one week in a NISMO badged car, but strangely it was the quirky looking Nissan Juke.

The Juke NISMO RS is a compact SUV that receives the NISMO treatment like the 370Z and GT-R. But why the Juke? Well Nissan are masters of squeezing every last ounce out of their model line-up, so why not?

This is a very limited edition run of the Juke with only 240 allocated for Australia. So, if you like uniqueness this is right up there in terms of looks and availability.

But it’s not just body-kit job, work has been put in to actually make the driving experience somewhat enjoyable.

The RS Juke scores an updated “race inspired” interior, there’s even a red line at the 12 o’clock mark on the steering wheel that is covered in Alcantara. It is a far more planted drive than other Juke’s thanks to a series of NISMO body and chassis reinforcements.

The suspension has copped a work over with new spring rates and a different steering calibration. The car sits marginally lower as a result.

Drive in the six-speed model I tested was sent through the front wheels. This was the only real disappointment of the whole package. The stack of power on offer leads to plenty of torque steer when hard on the throttle out of corners, let alone when things get wet.

The automatic model has all-wheel-drive and would be a far more enjoyable experience, I’m tipping.

But aside from that the enhanced of the suspension produces a pretty fun little car, with a light clutch and easy to use shifter. There’s also a bespoke exhaust, but it’s hardly raucous.

Plenty of work has gone into making you feel a tad special inside. The gear knob has some leather on it, the steering wheel is coated with Alcantara while the sports seats get the suede treatment. I love the NISMO RS push button engine start and you can imagine you’re in proper a NISMO car thanks to the red tachometer and branded front sill plates and mats.

The centre console looks a tad tacky with glossy faux carbon fibre covering it. The infotainment screen is almost the same size as some of the larger smart phones around. Somehow they’ve managed to fit a reversing camera and surround view image all on the one 5.8’’ screen.

That fake cabin fibre continues on the doors and air vents as well. There’s an odd second screen that shows you what drive mode you’re in and climate control functions. I’ve almost accepted that Nissan may have given up bothering about the latest infotainment screen technology.

The brakes pack good stopping power via the 4-wheel vented discs with larger 12.6 rotors at the front and vented rotors in the rear.

Under the banner Nissan Intelligent Mobility the Juke RS NISMO is fitted with anti-lock Braking, electronic brakeforce distribution, traction control and blind spot monitoring, satellite navigation is standard as is digital radio. But there is no Autonomous Emergency Braking, a bit of a no no these days.

As usual the car did the rounds of the EFTM office..

This car was almost completely unexpected. Punchy little drive, nimble too. But it did feel in my short drive that the clutch was a bit long and that left me revving a touch in changes and starts. That said. I got used to it. And really am just disappointed by how out dated the interior layout and technology are.

Yeah, it’s a fun drive, with plenty of power. The looks aren’t for me and it’s a bit too wild in the wet. The infotainment display is shocking, where is my Apple Carplay!?

The Nissan JUKE Nismo is no doubt a bit of a hoot to drive, it’s also a bit of a hoot to look at. If anything, at least you can brag you were one of the very few who parted with around 40k once you get the thing on the road. It’s a 6.5 out of 10 for me.