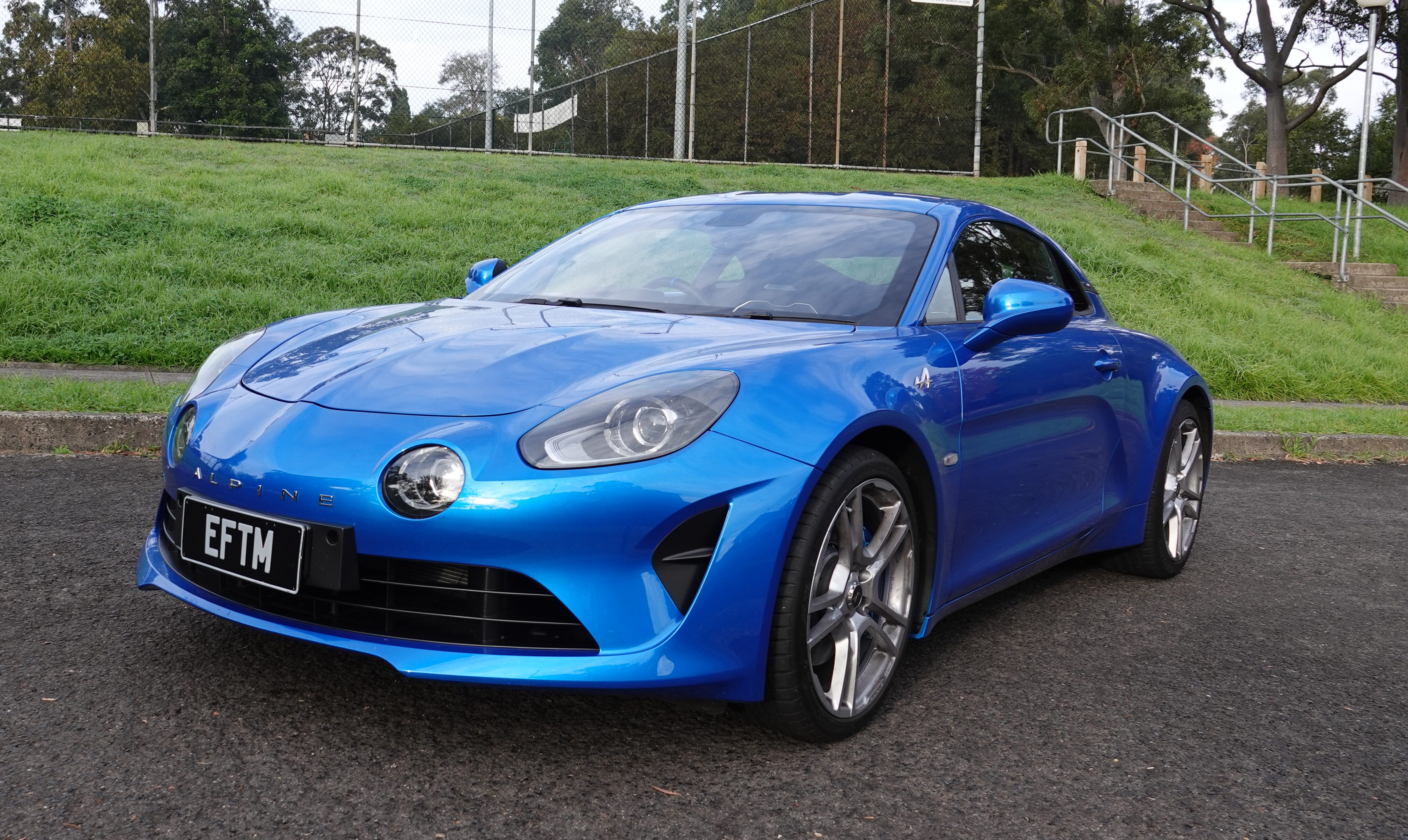 There’s more chance of me walking outside and being hit by an asteroid then there is seeing the Alpine A110 on the road. Australia has been allocated just 60 of the Premiere Edition models, but Renault Australia says around 15 are still available. Plus, the arrival of both the Pure and Legend models is imminent.

This question was directed towards me more than any other car I’ve driven. It got to the point where I offered up the simplified explanation that it was basically a “French Lotus”. The other issue is the pronunciation which you’d think was fairly straightforward. But in order to avoid sending purists into a state of conniption it must be noted that it’s actually an “Alpeen” according to the French.

What we have here is a lightweight mid-engine compact sports car that sends power to the rear wheels. Alpine in fact has a reputation that precedes it and has been around since 1954.  The link with Renault has lasted for decades via the sharing of engines and various other parts early on. In 1973 the company was bought outright by the brand but in 1995 Alpine models ceased rolling off the production line.

The A110 Model itself was born in the 60’s and production continued until the late 70’s. If you prefer to use ye olde terms the body shape takes the form of a Berlinetta, which is basically a two-door coupe. It was widely known during this period as a successful rally car.

In 2017 under the Renault / Nissan alliance the A110 was relaunched with the modern version doing a very good job of paying homage to the original.

I’ll admit I’ve been a little too giddy with excitement over the last week around the office but stay with me if you can. Apart from the sheer uniqueness of this car I found the Alpine A110 to be one of my all-time favourite drives. If I was to be totally objective I hone in on the following flaws, there’s no glove box, no cup holder, no side pockets, no reversing camera and a basically useless rear-window. I’d see more out the back if I was perched inside a letter box.

But none of this is relevant when it comes to A110, in fact I haven’t been so excited about anything since cracker night 1986 in Penshurst, NSW. The Alpine A110 jolted me into semi-delirium just like my late fathers’ roman candles, bungers and sky rockets would way back when.

It’s an electrifying car to drive. The 185kW mid-engine 1.8-litre turbocharged petrol engine propels the Alpine A110 to 100km/h in just 4.5 seconds, just like the far more expensive and powerful 250kW BMW Z4 does. As far as turbo powered cars goes, the A110 delivers exactly what you expect. A lot of this is because the engine is right behind your scone. It whistles, it whirls, and it sucks, at times you find yourself just blipping the throttle in traffic to hear it.

The exhaust note also features a natural snap, crackle and pop every time you lift off the throttle or shift down. The funny thing is you’d struggle to even find the engine, you need to literally unbolt the rear window to reveal it.

The steering is simply excellent, there are few cars that communicate such a level of intimate detail from the front wheels straight to your fingertips. This thing turns corners into straight lines. I don’t want to completely lose my mind but honestly, I’m either a better driver than I thought or the A110 simply has the perfect suspension tune.

The other point I’d like to make is that the A110 is an exceptionally quick car. There are some brilliant handling vehicles like the Toyota 86 for example, but with the A110 you really need to keep a sharp eye on the speedo. I have little doubt that on a track day this car could easily reach its electrically limited top speed of 250km/h, if you get my drift.

The 1.8-litre petrol four-cylinder engine has outputs of 185kW at 6000rpm and 320Nm of torque between 2000-5000rpm. Power is sent to the rear wheels via a seven-speed dual-clutch (DCT) automatic. The idea of a DCT gearbox revolves around lightening fast gear changes, because the next gear is always preselected. This proved to be mostly the case in the A110, in fact it’s one of the few sports cars where you’re actually inclined to use the paddle shifters. But just every now and then I felt I caught the gear box off guard which resulted in just the odd annoying shift delay.

The car weighs just 1,094kg which is the key to the success of the Alpine A110. This is achieved via a 96 per cent aluminium chassis. There are three driving modes Normal, Sport and Track. I’d suggest leaving the latter for just that, the track.

This isn’t a tech laden car, because that would mean weight. Even the Focal audio system has been designed to keep the kg’s to a minimum. There is a basic 7-inch touchscreen with satellite navigation. Plus, if you’re into Telematics there’s a range of data such as lap times and g-force figures you can dive into.

Just don’t expect Apple CarPlay or Android Auto. However, there is what they call Alpine MYSPIN which will mirror iOS and Android phones via a dedicated app. But to be honest it’s not worth the hassle.

Both I and our Dictator Trevor Long spent some quality Alpine Premiere Edition A110 here’s our summation in one sentence.

Surprisingly it was immensely drivable, I was expecting something brutal and mechanical. But it was quite the opposite, powerful yet easy to drive. It should be noted Bowen only allowed me to go to the shops and back!!

I love the car. No more to see here, move on.

Because like me you sat behind the wheel and went for a spin, it sells itself.

You’ve probably by now guessed I’ve fallen for the Alpine A110 Premiere Edition and for that I’m unapologetic. Sure, there’s a number of annoying drawbacks plus I don’t think the build quality is where it should be at this price. But wow I was literally stunned by its uncanny handling, pace and sheer uniqueness. It’s an 8.9 out of 10 for me.