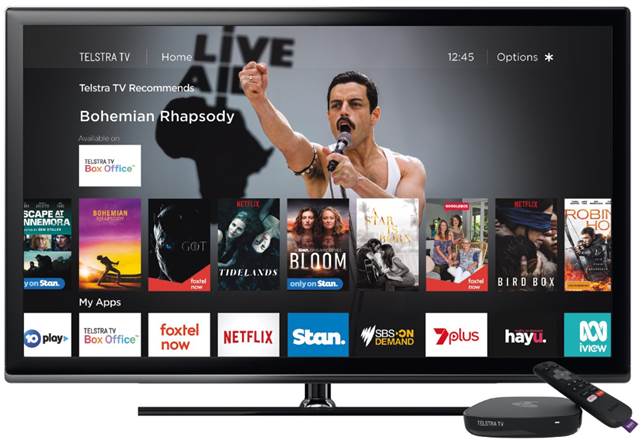 I have a smart TV, but for many be it due to lack of funds or like my in-laws you already have a perfectly good working TV why upgrade? Well I’m not here to preach but the fact is you’re actually missing out on a lot of excellent content, outside of the traditional free to air networks. Which brings me to Telstra TV 3 which was launched earlier this year.

This is a simple box with a remote that can transform almost any TV into one rich in content. These types of set-top boxes are trying to battle for your HDMI 1 input. In other words, it becomes an overarching device that overrides all the other sources you normally have to hunt around for to select what you want to watch.

The latest generation Telstra TV is very simple to set up. It’s a matter of plugging it in, logging in via your Telstra account credentials and away you go. It has an inbuilt TV tuner as well which initially was a problem for me, because unless you used Telstra as your ISP you were blocked from accessing free-to-air channels. That I have to say seemed a bit strange, but luckily just week Telstra announced that all post-paid mobile customers could now enjoy the full benefits of the service. I’ve always been a Telstra mobile customer but use iiNet for my NBN connection.

Telstra TV provides just about every streaming service you would possibly need, many of which frankly I’ve never heard off. The remote itself even has shortcut buttons to take you straight to Netflix and Foxtel, with the latter needing a Foxtel Now subscription. But if you delve deeper, you’ll find other services such as Netflix, Stan, Kayo Sports, Telstra TV Box Office, Hayu, Animelab, Garage Entertainment and DocPlay.

The box is able to stream 4K content across a range of services that support it. Amazon Prime also has launched recently on Telstra TV which of course requires another subscription. To be honest there’s some excellent content on there, but I only signed up for the Grand Tour. Most of these subscriptions allow for a month of free access, so if you’re not a fan you can bail out anyway.

The interface used on screen to navigate around is quite basic but given the intended audience for this product I don’t think that’s a bad thing. In fact, there are more than 1.4 million Telstra TV’s sitting in Aussie lounge rooms.

Buying the third generation Telstra TV will cost $216 outright or $9 a month over 24 months. But once again just a reminder you need to be an existing Telstra post-paid mobile customer. It’s a worthy investment for those with TV’s that are now 3 to 10 years old.