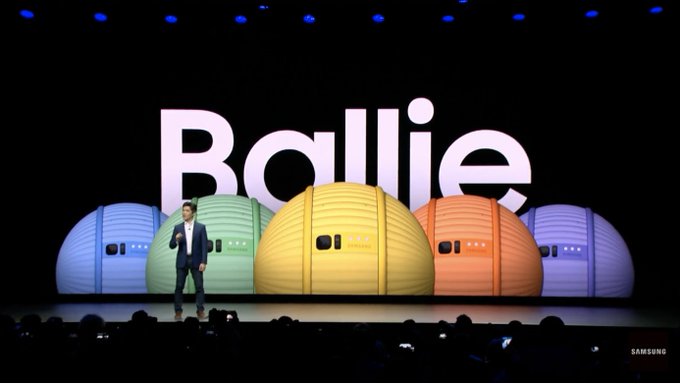 I’ve wanted my own robot as far back as I can remember. While I’m not going to be getting a Rosie anytime soon, I may get something with Samsung’s Ballie, a new ball shaped robot shown of at CES this week.

The rolling robot appears eerily similar in design to LG’s rolling robot which was announced alongside the LG G5 phone as one of their short-lived Friends. Where Ballie differs is that it’s designed not only as a mobile camera but as an assistant who can also run your smart home.

Ballie has voice recognition built-in so you can issue it commands, and I strongly suspect Samsungs digital assistant Bixby is hiding inside as well. Samsung also says that Ballie will help as a fitness assistant as well.

With a mobile camera that can roam around your home, Samsung is getting on the front foot regarding privacy and data protection with Ballie. Sebastian Seung, Executive Vice President and Chief Research Scientist at Samsung Electronics said

With a cat, dog and a couple of chooks at home I love the idea that I can check up on them during the day while I’m at work, or even chase my son around the house when I’m working a night shift.

Samsung hasn’t announced any dates or pricing for Ballie, but I know I want one. The only thing I have to work out now is how I’ll get it to travel upstairs.