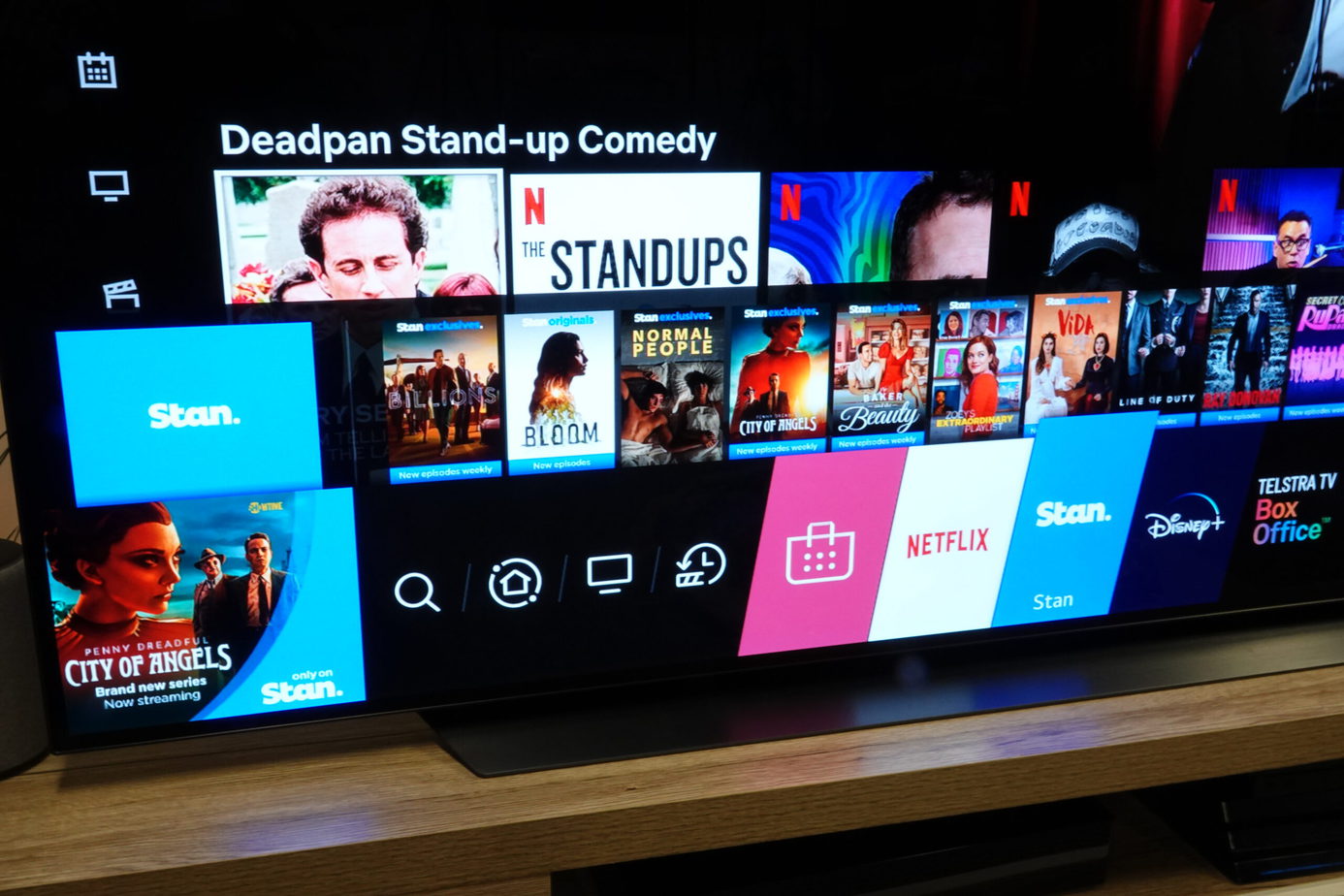 LG CX Cinema Series 65″ 4K OLED TV Review: A reminder of how great a TV can be

Look there’s no beating around the bushes on this one – OLED is the best TV technology on the market when it comes to picture quality. Hands down. I’ve probably put 15-20 TVs through their paces on the EFTM entertainment unit in the last few months, but when I placed this 2020 OLED from LG up there it was instantly obvious.

That’s not to say those other TVs aren’t great. They are – particularly when you factor in the fact that this thing is $5,399 RRP from LG.

You want a real perspective – you can get plenty of 65 inch TVs here, here and here well under $1000. So if Size is your shopping point – then look away, this TV is about features and quality, that’s what LG offers with their entire OLED range.

The LG OLED TV is so damn thin on the top half that it’s scary to unbox. Do not rush this, do not attempt it on your own. Getting it right is more important folks. The huge weight of the base far outweighs the “screen” just to ensure a perfect balance.

I do love the base, it’s sleek, makes the screen appear to float on a curved rail, and is also unique – which is good at this price point.

Once setup, this is one of – if not the easiest to use Televisions available today. LG’s WebOS operating system has proven a winner for them for several years, and you can get almost every app you need installed.

Disney Plus, Stan, Netflix, Foxtel – they’re all there – just need Kayo and we’re starting to really sweep the pool.

But, as LG pointed out to me, no need for the App if you’ve got an iPhone or iPad, this TV comes out of the box with Apple TV built-in.

You can AirPlay to this TV in an instant. Works great.

Realistically, the differences from 2019 to 2020 are minor, and entirely incremental, so nothing to worry about if you’ve snapped up an LG OLED in the last 12-18 months.

Though, there’s little doubting the focus on picture and smarts.

This is the definition of a Smart TV. Not just because it has apps. This TV is also Smart connected with Google Assistant, Alexa ready to take your command. Plus, it’s Smart in that it can see your home devices.

The Home Dashboard is a cracking feature of the TV. Admittedly, with just a few days to test the TV, I didn’t throw the world at it, this, in theory, is a single place to see your smart home connected devices, LG smart devices and generally control your TV dashboard. If I had more time with the device, this would be where I’d be most keen to explore.

Using WebOS, that lower third home-bar that appears on screen when you hit that “home” button is better than ever. Learning and adapting to your viewing habits, and more apps than ever have the second tier information bar allowing you to essentially dig into their content without even launching the app. Get straight to the show you want.

But in the end, it’s all about picture quality. And that’s the shining light for the LG OLED range.

First and foremost, it’s OLED – that means every single pixel on screen is lit when required, off when not – that is why the blacks on an OLED screen are outstanding, not just in large areas of black, but also along the lines where colour meets black. There is no other technology that can emulate that.

“Local Array Dimming” as is present on many other styles of TV – including LG’s own non OLED screens – does an amazing job to dim the darkest areas, but it doesn’t match an OLED.

You notice this watching almost anything. I watched the Chris Hemsworth Netflix movie Extraction start to finish, in part I watched in a dark room, and in part in a room with all the windows opened and this TV is capable in both scenarios.

There’s a bunch of AI going into assisting your viewing experience, most of which you’ll never notice – nor will the average eye really get in my view, but I think when you take a 2020 OLED from LG and compare it to one from five years ago what matters is the picture is still improving every single year.

The pressure on LG is enormous, Samsung’s QLED, Hisense’s soon to arrive Dual cell ULED screens are just a couple that we expect to again improve that black to colour contrast, and attempt to rival OLED.

Right now though, OLED is top of the pops, and the 2020 LG CX OLED is a perfect example of that.

Just looking at 65 inch models, LG’s 4K OLED range starts with the BX model – at $3,995 in retail, that model misses the AI Picture and Sound features of this CX, as well as what LG call Auto Genre Selection.

That feature is pretty cool – using smarts to “look” at what you’re watching to work out if the picture mode might be better in Cinema, or Sport, or Dynamic. A feature most people don’t tinker with – so LG are making it smart and automatic if you choose – on the CX (and higher) models

There are some other minor differences, such as the 4 HDMI’s on the CX are 2.1 enabled, and the CX has the Alpha 9 Processor, the BX has the Alpha 7.

The BX scapes in under $4,000 – I think strategically from the retailers perpective – telling your wife the new TV price had a four in front is a lot harder than a three if your budget is pushing that direction.

this TV is made for wall mounting. It’s thickness is shared top to bottom for a uniform fit against a wall, while not the $2 coin OLED we imagine, the CX is $2 thick at the top, but its a beast at the bottom by comparison.

LG has the best quality TV picture available on the market with it’s OLED range, personally, if I had that kind of cash, I’d save the extra for the OLED GX model for Wall Mounting. If you’re not wall mounting, take the CX at a pinch.

Stunning picture, Impressive Smarts, and an Operating System made to make the whole viewing experience easier – no matter what you’re watching.

It’s just bloody expensive that’s the only negative – one for you and the missus to debate.

LG CX Cinema Series 65″ 4K OLED TV Review: A reminder of how great a TV can be