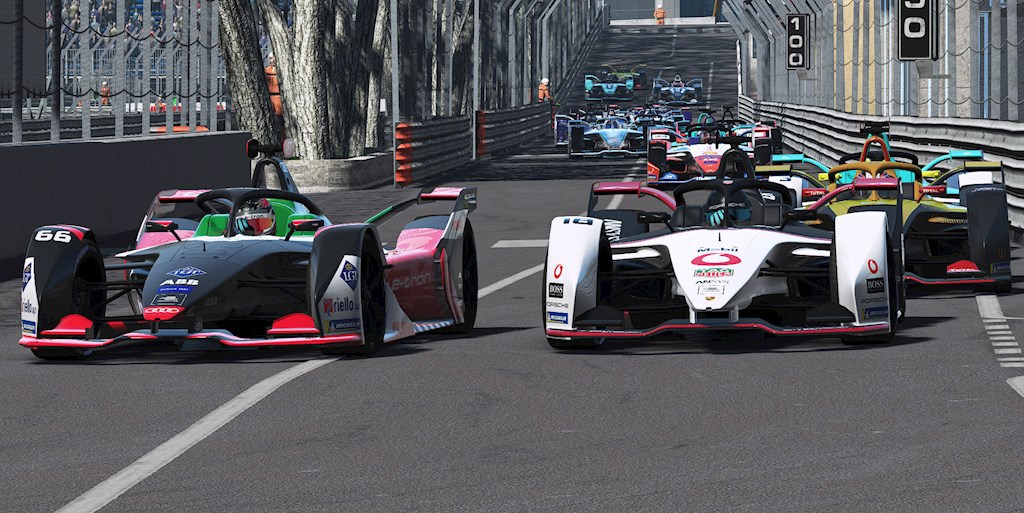 During this unprecedented global pandemic almost all sport has ground to a halt, with only now certain events looking to plan their return.

One sport has charged through – in a new way – motorsport.

In fact, it’s probably the only sport that’s capable of doing so because turning to eSports for Football/Soccer is really just computer gaming. There is little to know real-world football skill that is carried over to FIFA on the Xbox.

However, in Motorsport, like no other – the controls are identical in the real world as they are in the virtual game – a wheel and pedals at it’s most basic configuration.

Like Supercars, IndyCar and Formula One, the Formula E series has also turned Virtual, and last week EFTM got the chance to chat with the Nissan Formula E drivers Sébastien Buemi and Oliver Rowland.

Now, I will say, Sébastien took the group Zoom call with Journalists a very different way – a serious look at the sport, the plans, the serious use of the simulator at Nissan’s Le Mans based facility. In all honesty, there may also have been a gap between the Aussie larrikin questions and his Swiss language, but we bridged that to get a real insight into his passion for the sport.

However, like many racers across the world, it’s also clear Sébastien is not a born gamer – he’s a born racer. At his home Formula E have delivered an out-of-the-box Virtual Racing setup complete with PC, Playseat, Pedals and Wheel to get involved in the Formula E Race-At-Home challenge.

The series takes place over 9 weeks with several still to go and sees the entire Formula E championship shift online.

His team-mate seems quite the opposite. At home literally in his simulator.

Rowland telling EFTM there is a benefit to racing in eSports as a driver “as much as eSports is slightly different to the real-life it keeps you sharp because your constantly adapting to do new things and it keeps you thinking about racing.”

He went on to say “and I enjoy the competitive side, we’re all pushing to win, it brings that element of competitiveness out again rather than just being sat around not able to do much.”

The big question though is could eSports be the future for motorsports? Rowland is positive about eSports but not to that extent, saying “I think there is definitely a future for it, albeit it will never take over from the jobs we do.”

What I found most fascinating about our chat was Rowland’s thoughts on how it might be improving him as a driver, making him ready to return to real racing.

“My problem last year was qualifying” he told me. “I was either right at the front or making too many mistakes, and a lot of that came down to handling the pressure of qualifying”

Rowland says that eSports could be helping with that, saying “in a lot of the eSports races, qualifying is literally one lap, you can’t go outside track limits, you can’t afford to lose one-tenth, and actually, without being in the car and having the adrenalin, you actually feel more nervous in the simulator than you do when you’re in the car”.

“When I wanted to do well, I was getting stressed out, but over the last few weeks having to do it over and over again, I genuinely feel like I’m learning to manage the pressure that may help me when I go back to the track”.

As a race fan, I was curious to know if the drivers were keeping up with the rest of the racing in the virtual world.

Rowland says “I’ve watched the f1, I’ve followed the V8 one, and I’ve got into a lot of different races myself too.”

“It’s interesting to see how the sports are merging, you have Lando and Max doing the Supercars one and in the Indy 500 you have Lando mixing it with the Americans”

“it’s been fun to watch – there’s mot much sport able to watch on TV, so having races during the week you can tune in and watch is good fun to do.”

Buemi telling EFTM “I’m watching a few highlights of the Indy 500 virtual race, and the Supercars in Australia – but not following every round, or competing in other series, I’ve just heard that the WEC might organise a virtual 24 Hours of Le Mans, so I might participate in that. Just focussing mainly on the ABB Formula E Race at Home Challenge with Nissan”.

A great insight into the world of Motorsport when things are on hold, and we’ll watch with interest to see how Rowland’s qualifying performance goes once they get back to the track.

Until then, you can follow the Formula E Race-At-Home challenge over the coming weeks.