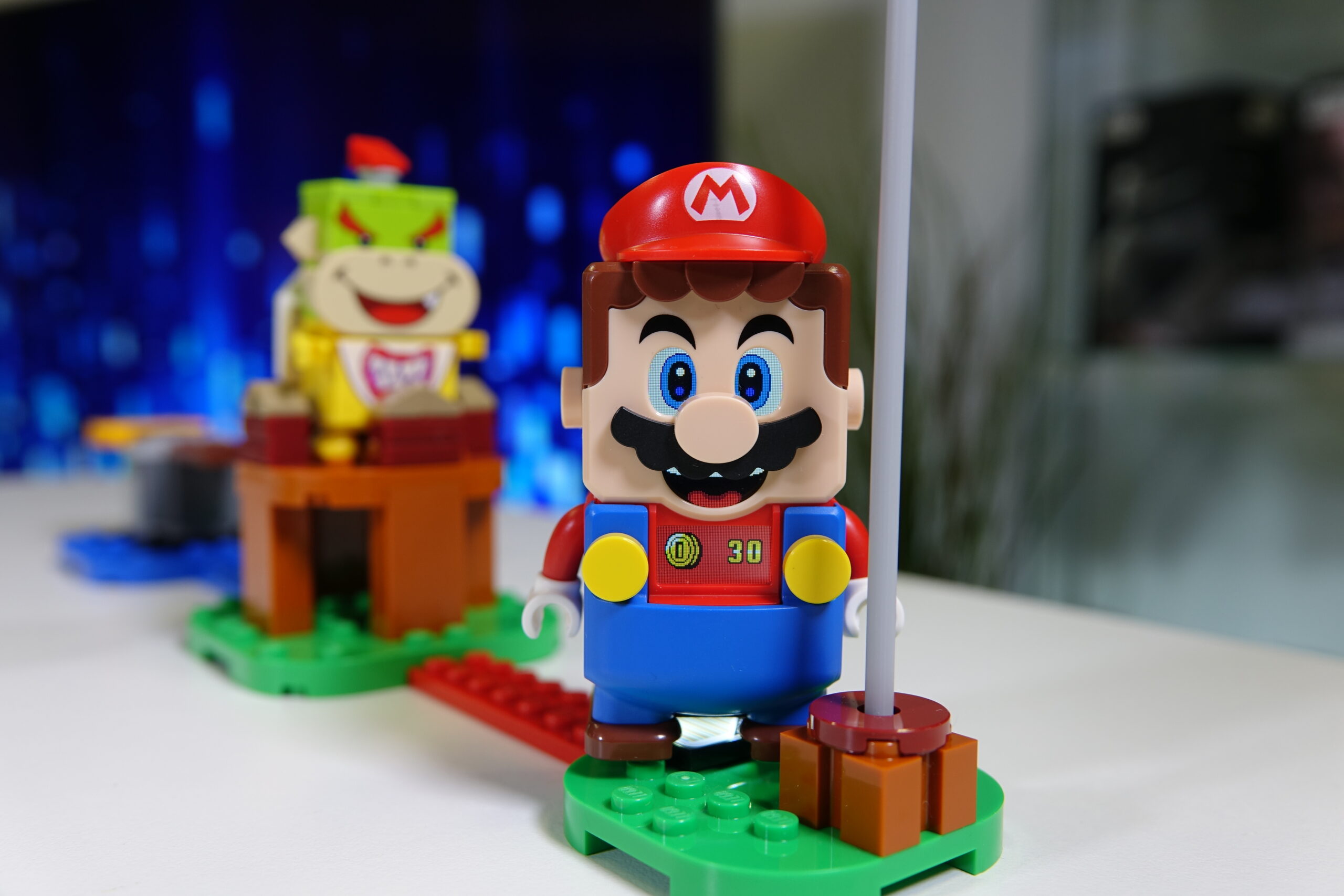 When I say interactive and gaming and Lego all in the same sentence, you’re thinking this is an app based game which uses Lego as the hook.  Nope, this is Lego, that you can play a game with and it’s interactive to the point where the Lego itself will give you a score.

This is LEGO Super Mario.

You do need a device like a tablet or smartphone to get started, because even in the basic starter pack there are no printed instructions.  Lego say this is because there is no set way to build the Super Mario LEGO, instead, the instructions are interactive and teach you how to play with Super Mario.

And once you get the hang of it, you’re going to want more.

Mario himself, is, of course the key to this whole thing.  But he’s not a Lego Mini figure, he’s more like a Duplo character in size when I think about it.  But he has two batteries in the back, and they bring him to life.

Another small screen on his belly shows scores and information during the game.

What is the game?  Whatever you want.  You build a level out of lego, you can include the various items in the starter pack, or buy the many expansion packs with Yoshi,  Bowser, Toad et al, and build levels that look like real Mario game levels, but on your dining table or coffee table, that you can then play.

You power on Mario, tap him on the start brick.  Mario has sensors underneath him to detect what brick he is on.  Once started, the countdown commences.

Walk him around your level, play with your interactive objects, avoid the red bricks they are fire, careful in the blue that’s water – and just have fun.

There are so many options of things to play with – the number of ways you can build a level are infinite.

Get to the end, jump on the finish tile and your score is presented on his chest.  Then, start over, try and beat the score.

When you’re done with that level, build another.

If you’re right into it, the App remains a part of the game if you want – but you don’t need to.  It can record your scores through Bluetooth, and allows you to take photos of those levels you build.

Honestly, this is fantastic fun.  A Game’s night challenge with the kids, or just the kids enjoying Lego in a very new way.

Takashi Tezuka, Executive Officer and Game Producer at Nintendo said  “With today’s announcement, 16 LEGO Super Mario sets have been introduced and I am really looking forward to seeing how people’s play expands with these and the unique Power-Up Packs,”

“Each player’s preferences and imagination are different. By adding already owned LEGO bricks onto the Starter Course, and different LEGO Super Mario expansion sets, we hope that people can create various different Mario worlds and continue enjoying them indefinitely.”

Jonathan Bennick from LEGO added “The reaction to LEGO Super Mario has been incredible,”

“Super Mario is such an icon – and fans have been highly anticipating the release of the full details of the product line. Our entire range – from the Starter Course to the Power Up Packs, through to the Expansion Sets and Character Packs – have been built to bring Super Mario, his friends – and his enemies – to life. We love how creative Nintendo and LEGO fans are, and can’t wait for them to unleash their imaginations in how they interact with Super Mario in the real world.”

LEGO Super Mario goes on sale in August, but pre-orders are starting now.  The Starter Course is $89.99, which includes Mario, plus you can buy powerup packs for him for $12.99, along with a huge range of expansion sets which retail around the $49.99 up to $149.99.

My kids were genuinely lucky to get to play with this before most and even took part in an online challenge with other journalists from around the region.  While they didn’t win, their second-place scored them the Bowsers Castle Expansion pack which they nag me about receiving daily, so I can tell you for sure, LEGO is on a winner here.