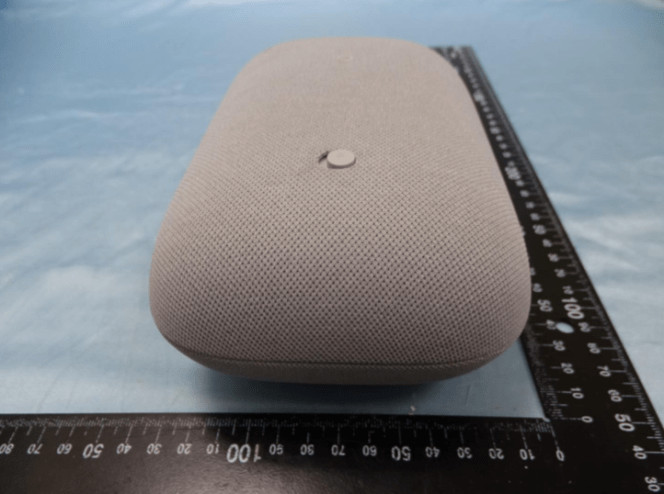 Next gen Google Home shows up with Nest styling

A new version of the Google Home smart speaker – likely to launch under the Nest branding – is getting ready to launch. The speaker has passed through the US Federal Communications Commission (FCC) where a few photos of the device have come to light.

The listing on the FCC database for the speaker – model # GXCA6 – included a number of photos of the device as found by @Androidtv_rumour.

As you can see the speaker is more aesthetically in line with the Nest Home Mini than the last generation Google Home with a grey coloured fabric covering the body and a rubberised base with the familiar ‘G’ branding embossed in the centre. Privacy advocates will also be pleased to see what appears to be the mic mute switch is still there, as is a hole for the power adapter can also be seen in the pics.

The speaker – codenamed ‘Prince’ – is expected to include larger drivers than the original – which included 2″ driver + dual 2″ passive radiators – which should in theory give this new speaker more power, and improved sound over the original. There’s also, as you’d expect support for Wi-Fi and Bluetooth found in the filing by 9to5Google.

Exactly when the speaker will be announced isn’t clear, with Google still yet to announce the Pixel 4a, which was presumably going to be announced at the now cancelled Google I/O developer conference in May. Google has traditionally announced new hardware in October at their ‘Made by Google’ hardware event, though with COVID-19 delaying a number of launches for manufacturers this year, even that tenuous date may be up in the air.

Google currently still sells the Home speaker on their online store in Australia for $149, though it has stopped selling the speaker in the US. Pricing for the speaker should be in line with the previous model, but we’ll have to wait for the announcement to find out.

Update:
Google has reached out to US publications to share a more pleasing, PR friendly shot of the Nest speaker than the more ‘serviceable’ shots supplied on the FCC listing above.

They’ve also supplied a demo video showing that the speaker itself could be portable. At the 5 second mark, the woman appears to sit the speaker – or possibly half the speaker (does it split in half?) down, and at the 8 second mark the girl carries the speaker in as well.

We’re still no closer to a launch date, but the speaker is real and hopefully coming soon.

Next gen Google Home shows up with Nest styling