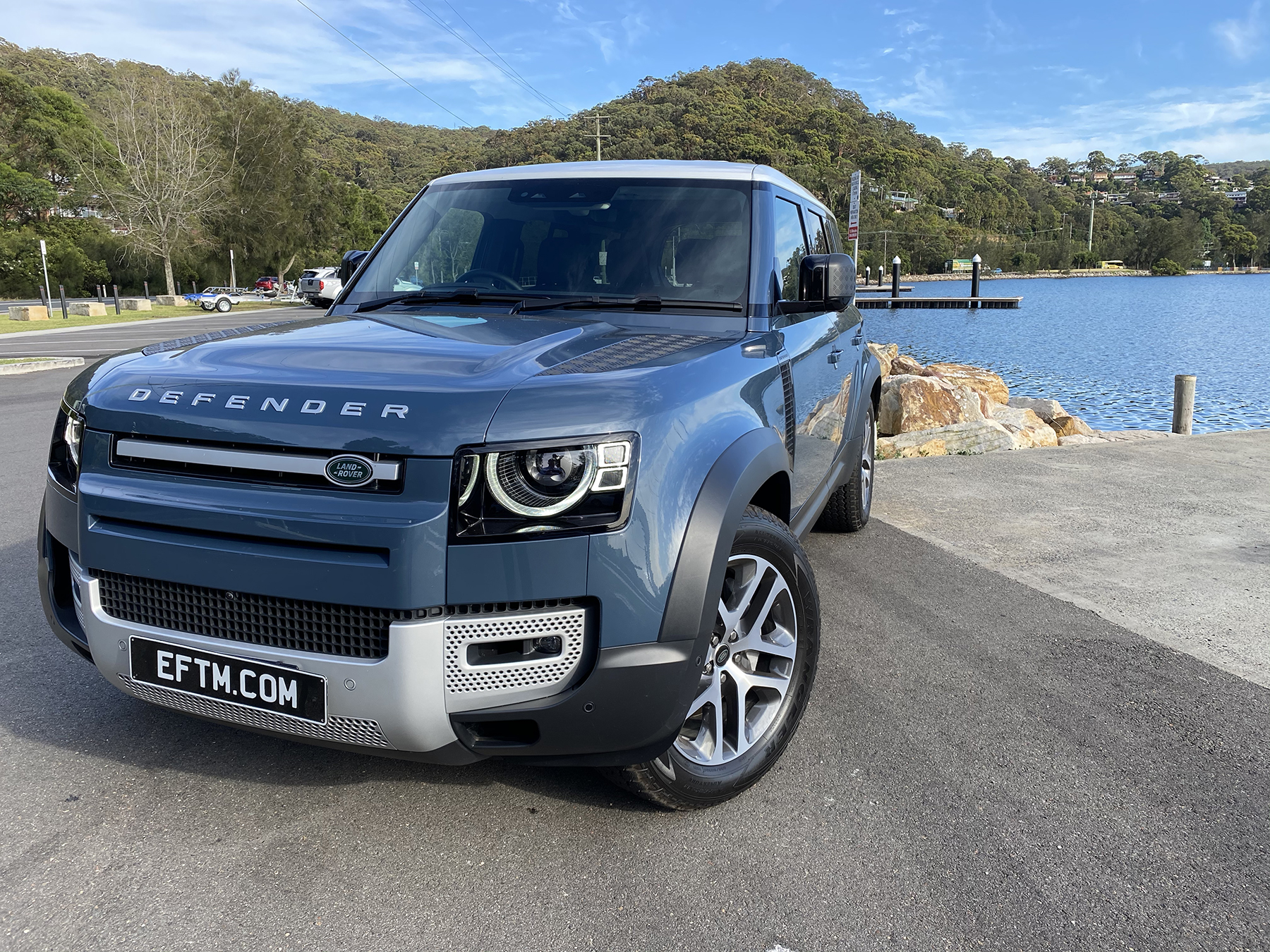 Like many, I had been anticipating the launch of the ‘new’ Land Rover Defender for years. Little news leaks here and there, the odd spy shot from testing and then, finally, the launch press release has kept my appetite whetted for the years and years that it has taken for the Defender to make it into production. Now, it’s here in the EFTM garage. So, has it been worth the wait? Um, sort of.

One of the justifiable criticisms of the new Defender is that Land Rover has completely abandoned the essence of the original Defender and earlier Series trucks. I’ve owned early Land Rovers and the degree of luxury appointment is, er, sparse. Floor coverings, sound deadening, windup windows, radio and boosted brakes were all non-existent. Land Rover have instead opted to ignore pleas for a back-to-basics re-creation of a traditional Land Rover and instead chose to bless the new Defender with some cutting edge off-roading and comforting technology.

Land Rover’s ‘Pivi Infotainment System’ is the English firm’s take on integrated connectivity. A customisable display screen mirrors that of a smartphone, but promises increased vehicle connectivity over, say, Apple CarPlay. Further, Land Rover’s Pivi App allows you to operate the Defender’s central locking, keep track of your trips, keep an eye on the Defender’s general health, seek help and tell the Pivi Pro sat nav where to go remotely, via your phone.

A Smart Rear View mirror uses a rear facing camera to project the view from behind, bypassing the things that block the view in a traditional rear view mirror: rear headrests, back seat passengers, rear door mounted spare, etc. Some like it, while others (like me) will find the change of the traditional focal point too much to bear.

Terrain Response 2 gives you the option of letting the Defender sense the terrain that it is traversing and adjust a whole range of its functions in a way that maximises it’s off-road performance. This is a brilliant idea for the off-roading novice. In older Land Rovers, tapping into the off-road ability of your little aluminium marvel was an ordeal, first requiring you to jump out and ‘lock’ the front diffs before hooking up low range in the transfer case and balancing a whole lot of tricky throttle, brake and clutch movements. If you’re not happy letting the Defender sort itself out, the new Defender’s Terrain Response technology allows you to use the touchscreen to fine-tune every aspect of the vehicle to suit the tricky predicament you have found yourself in. The touchscreen also operates the centre and rear differentials as well as three options for throttle sensitivity and gearbox response. Better still, you can save up to four individual user profiles.

The Defender is also the first Land Rover to feature a wade function within the Terrain Response 2 menu. Hit this bad boy and the throttle response is wound back, the aircon is set to recirculate and the ride height is cranked up. The display will also show the depth of the surrounding water. The Defender’s safe wading depth is 900mm too, which is a good chunk more than that of Toyota’s Prado (although a snorkel addresses this deficiency easily).

Not enough off-road tech for you? How about ClearSight Ground View? The system uses cameras to show the hidden area directly in front of the vehicle and displays this view on the touchscreen.

All of this technology is deeply impressive and allows novices to really begin to approach the limits of a very, very capable car off-road. For example, I am confident that a novice driver will be able to venture into far more extreme terrain in the Defender then they would be able to in Jeep’s Wrangler Rubicon. For an experienced off-roader, I think the disparity in each vehicle’s ability would be negligible (although the Defender is light years ahead of the Jeep on-road).

The most impressive thing about the new Defender is that it drives nothing like a Defender. Always superb off-road, early Defenders and Series Land Rovers were, frankly, diabolical on-road. This is no surprise, really, because the new Defender is basically a Discovery in drag. This makes for a comfortable, capable SUV both around town and on the highway.

Another aspect of Land Rover that I really like is the very European tradition of a huge options list. While this makes it very difficult to accurately price a Defender for the purpose of this review, it makes it very easy for an owner to shape their new car exactly the way they want it.

This is easy – for a ‘Defender’ and all that this name plate stands for, the new Defender has far, far too much technology. Defender means tough, bare bones, stripped back. Instead, Land Rover has produced what is essentially a Discovery in a far from convincing fancy dress. For example, random splashes of plastic checker plate look odd and drew damnation from the Land Rover purists I bumped into and bewilderment from my mother-in-law. It’s just weird.

Ultimately, Land Rover threw away an opportunity to expand their market share and introduce new customers to the brand. Imagine a stripped back Defender coming in at the sub $50k price point and presenting a real alternative to a mid-spec dual cab. Instead, all bar the plainest Defender is set to steal sales from the rather excellent Discovery – a car that proudly flaunts its technology and sports a style that is free of the shackles of tradition.

Make sure you check out Land Rover’s Discovery. It matches the Defender’s on-road and off-road ability while utilising a more practical and less polarising (faux?) style.