Upgrading to NBN Fibre to the Premises – what’s it like to be one of the first FTTN to FTTP upgrades?

Having struggled for a couple of years with a lacklustre 25 mbs speed from my initial FTTN service, then enduing the installation of an ugly micro-node right in front of my house, just so I could receive a boost to 100 mbs, my nbn journey has been a long one.

In May 2021, when the long-awaited fibre to the node (FTTN) upgrade to FTTP was announced for hundreds of suburbs nationally I keenly scrolled through the list in the hope of seeing mine. Why? Cause it would be cool. Do I need gigabit speeds at home? No, but it would be cool. Would my wife approve of the expense? No but it would be my little secret.

Of course I registered as soon as it was announced that I could upgrade to fibre all the way to my home and then thought nothing more as months passed and no email notifications.

Come April this year it was finally time for the nbn to announce the first of the upgrades could be undertaken in the coming months. The real surprise for me was that the conditions to qualify were not as onerous as I anticipated. As long as I stayed on my 100 mbs plan (or higher) for a minimum 12 months with my current provider I could get the upgrade FOR FREE!

A quick check showed that I wasn’t in the initial batch but it was coming. So I expected another long wait. Lo and behold I get a call from Aussie Broadband within days saying if I want it, I can have it right now.

So I went through the process with ABB who were terrific and within two days had a contractor at my home to pull the fibre cable from the road to my house. More great service. No digging required. They simply used the existing conduit from the Telstra copper run from the existing pit. A bit of brute force and through it went.

I was told that if they couldn’t use that method then a $300 charge would apply to dig a new trench (if I wanted to continue). Lucky for me that wasn’t required. Next up was the installation of the Utility box on the side of the house.

The initial box installation was complete and now all I had to do is wait for my installation. I could have scheduled it for late April but I was going on a long roadtrip so Mid- May it was.

Here’s where it got interesting – The call centre saga

Whilst I’m driving along the Great Ocean Road I get a phone call from an unknown number. Now I don’t normally answer these types of calls but this time I was curious. It wasn’t Amazon saying they were going to cancel my account. It wasn’t the tax department saying there was an arrest warrant out for me. It wasn’t even a Nigerian Prince pledging me millions if I just give him my bank account details.

However it sure did sound dodgy. I do not know what call centre the nbn use but it’s not smart starting a conversation asking me to verify my details. Not clever at all.

They did however know a bit more about me than the average scammer would so I listened. They had an earlier installation date if I wanted it. I declined as I wasn’t able to be there any earlier. End of phone call number 1.

Next day, another phone call also asking me to verify my details. Again I decline, advise them that asking people that you call for verification of their address and suburb etc isn’t best practice and I am not interested in an earlier appointment. Thanks anyway

Day 3 another call with same script. Another apology and another promise not to call me again was made. When call number 4 occurred THE SAME DAY I let fly. By this time I was livid and explained that any more calls and the Ombudsman would be getting involved. Whilst I didn’t swear at the caller himself I certainly let some colourful language pass my lips.

When two more calls arrived the next day you could have cut the air with a knife. Whoever nbn employ to perform their appointment-making they really need a kick.

So after my final exchange I was genuinely concerned that they had pushed me back to 2025 as punishment for my responses but no, yesterday another guy rang me to confirm the appointment and Aussie Broadband texted me with all the details again. The task would be undertaken between 8 am and noon today.

8.15 am and the contractor Jack turns up and has the pleasure of crawling through my roof to run the cable from box no.1 to a connection box inside. I chose a point in my garage which would be best placed to connect to my existing equipment. The contractor was very accommodating.

90 minutes later he finishes up, explains the work he’s done and makes his way to the next job.

Now what’s the use of having potential gigabit speeds if you don’t give it a whirl so I closed the door and made a quick phone call to Aussie so my wife couldn’t hear.

Of course I can’t justify the extra $50 a month to maintain it but with Aussie you can move between plans at will.

The Good, The Bad, The Ugly

The good : I am over the moon with the speeds and the service from my provider and the contractors. I’ve taken my Orbi router out of AP mode, ditched the Netcomm modem and can now take full advantage of all the Orbi functionality

The bad: The nbn call centre was atrocious

The ugly: That bloody micro-node is still there 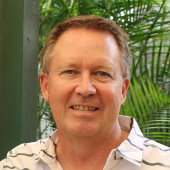 The elder statesman of the EFTM team, Rob has been a long time listener, reader and follower - he's been chomping at the bit for his chance to write too. To be fair, he's probably the most tech-savvy bloke in the crew too!

Fixing a Plasma with a Baseball bat