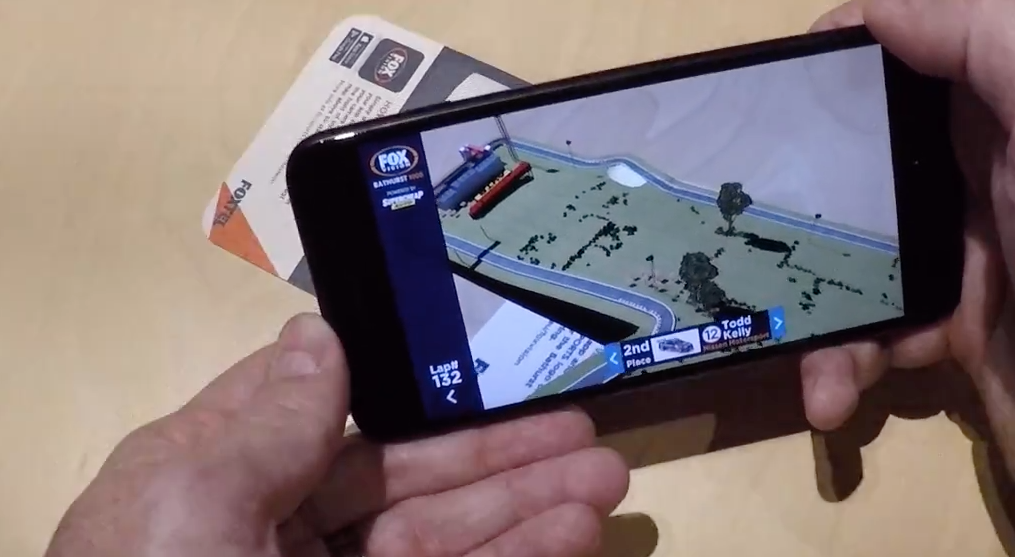 There’s something awesome about the innovation that TV broadcasters have been doing over recent years to enhance their broadcast coverage of sport, but I’m hard pressed to think of something cooler than what Fox Sports Australia have just launched for the Bathurst 1000 this weekend : Fox Vision

As a self-described rev-head, I didn’t think Fox Sports could do better than launching a 24 Bathurst 1000 TV channel for the week leading up to Bathurst (Channel 506 on Foxtel folks, get on it).

Today, I sat in a cafe at Fox Sports HQ in Sydney and was shown something so awesome I may have squealed like a schoolboy/schoolgirl (so PC of me:)).

Fox Vision is a new app, launching in the App store at 5pm today which uses both 360 degree video technology and Augmented Reality (AR) to blow your mind as a complementary viewing experience to the weekend’s racing.

Inside the app, you’ll find three key features in addition to a “race centre” where loads of race data can be found in real-time (but get this – that’s the boring stuff!)

Firstly, 360 Vision – this is going to show a 360 degree video from inside race cars.  Currently the video in the app is from Sandown, the team at Fox are going to film new 360 videos over the weekend and show them from time to time in the app.

But the real action is in the 3D section.  After debating long and hard about the use of the term Augmented Reality, the team at Fox Sports wisely opted to just call it 3D – because that’s likely how average users would describe it and it requires less tech savvy to understand.

Don’t be fooled though, this is Augmented Reality, in a fully connected way.

To begin, you’ll need the trigger – this could be a coaster from the local pub, you can print it out from the app and it will appear in major newspapers across the country on Thursday and Sunday.  Once you have that, you’re set to go. 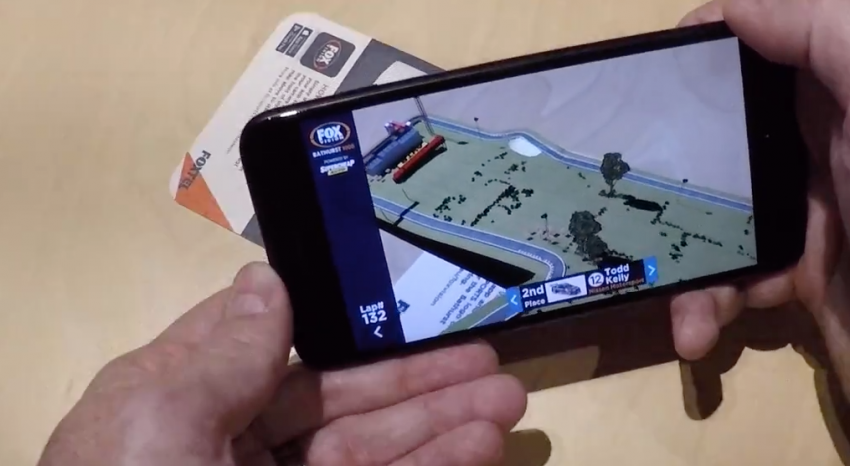 Open the Live 3D Map and the app uses your smartphone camera to look at the space in the real world in front of you.  Once it detects the “trigger” a computer modelled 3D map of the mountain will appear in front of you. Looking through the smartphone screen the map appears as if sitting on your desk.  Walk around, move the phone and the map moves as if it’s stuck in place on your desk. 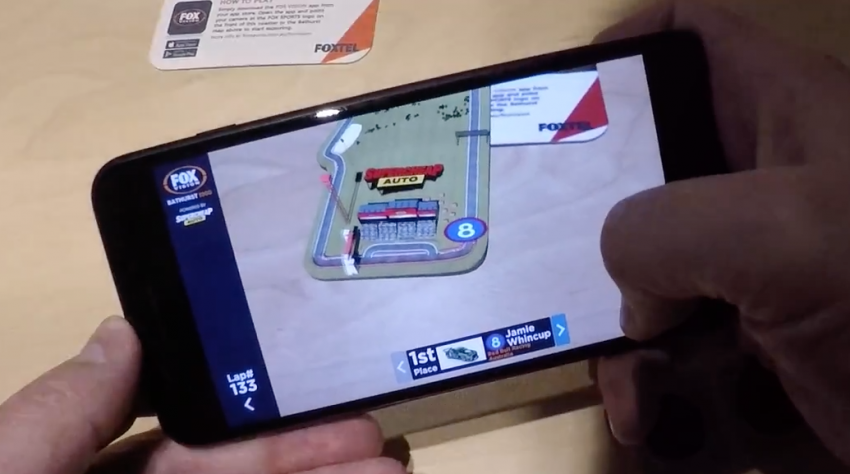 That’s fancy, but that’s not the awesome part.  During live Supercar sessions on-track this weekend, the top ten cars will be shown as dots on the map indicating their position on the 6.213km circuit in real-time.  Tap on the dot and you can see the car, driver and position in the race.

Follow them around, look at the gap they have.  Whatever you want.

This is a world’s first application of real-time sports data and augmented reality – and it was built here in Australia. 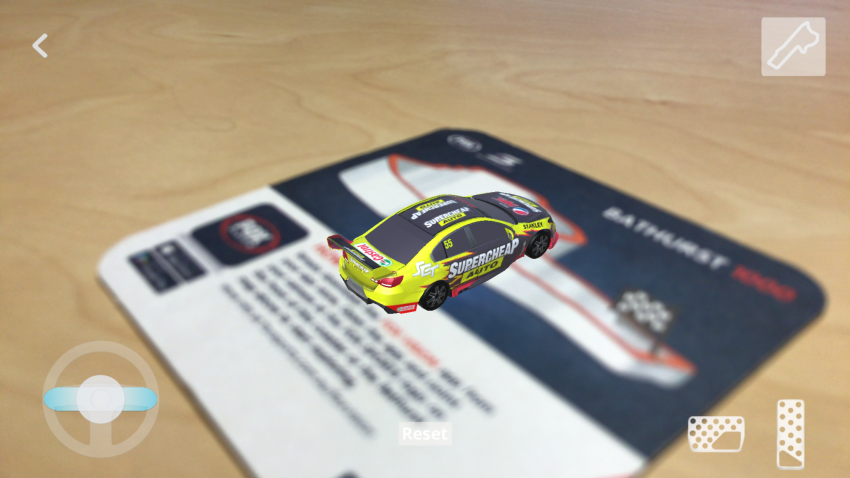 Open the Live 3D Play section of the map, and on your desk, or table, sitting on that “trigger” which might just be your newspaper – is a Supercheap Auto Supercar.

On screen, a steering wheel, brake and accelerator – yep, drive it.  Do burn outs and donuts on your desk, have fun! 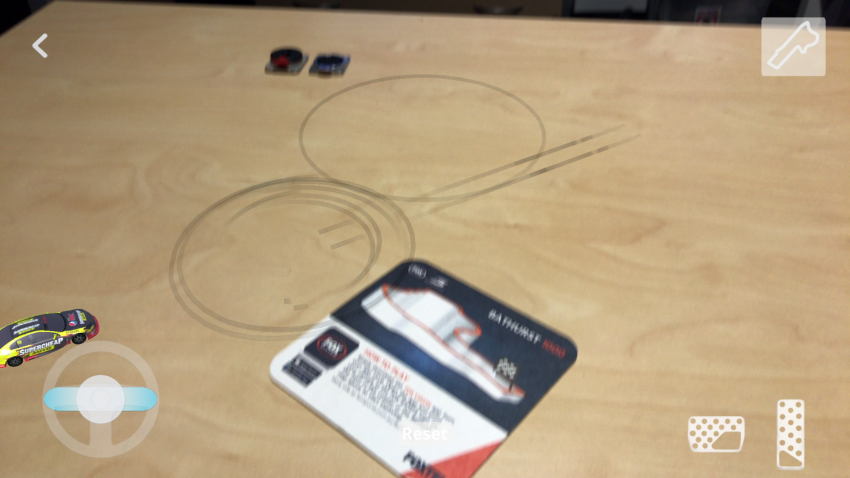 When you’ve got the knack of things, click the race track icon top right – and you’ll see a simplified Mt Panorama on-screen as if right in front of you.  Stand up, look around it, walk around it – anything.

Your challenge – drive the car from the paddock onto the track and set some lap times. 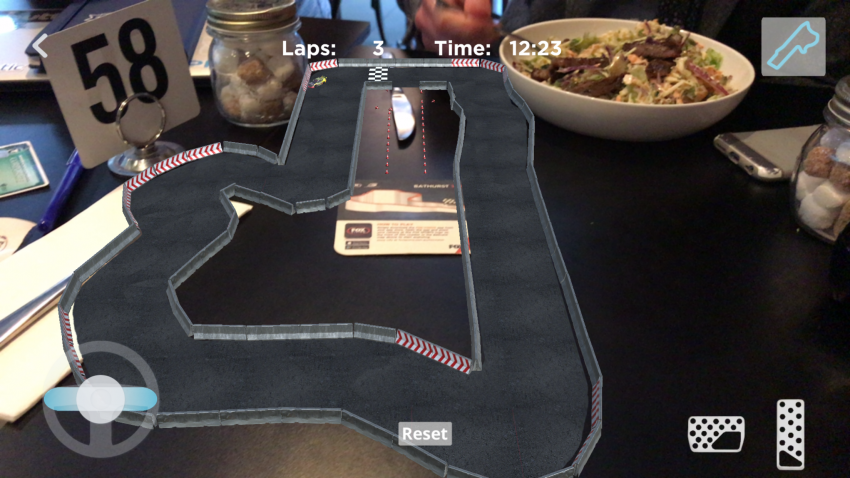 Over the weekend, hit some laps, screenshot and share with the #FoxVision hashtag on twitter and tag or mention @EFTM or @TrevorLong – I’ll be keen to know how you go!

FOX SPORTS CEO, Patrick Delany, said of the app launch “Our determination to innovate across all of our sports rights and platforms is driven by one thing; to create a better and more immersive experience for fans of every sporting code. By harnessing the power of augmented reality, we are offering viewers a new and different way to experience our products, which adds to the narrative being played out on TV. This clever and compact app will not only allow viewers to see the progress of the top ten, in real-time, but through AR, Mount Panorama, with all of its unique steeps, elevation changes, straights and corners, will be accessible to Supercars fans for the first time.” 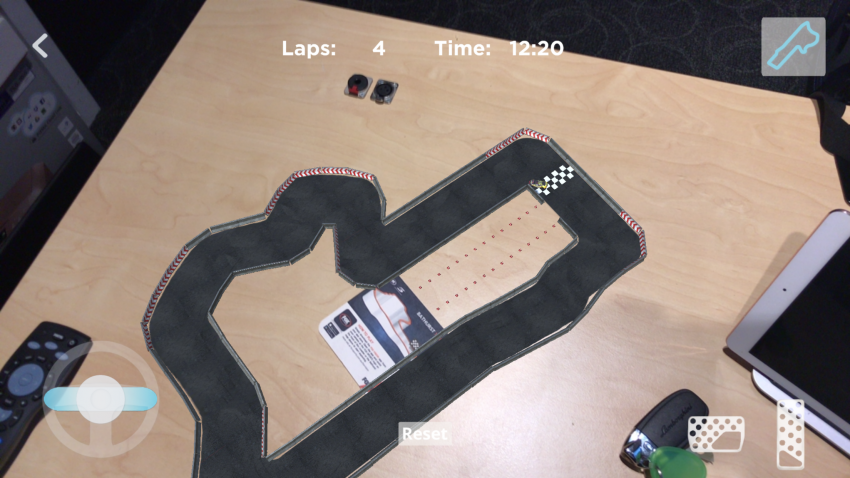 Now, for rev heads, this is outstanding – but just for a moment think about the applications across other sports.

NRL, AFL, A-League – whatever it might be – you could be accessing real-time stats or player info on a virtual field – play more interactive games with your mates in an Augmented Reality environment.

Games like Pokemon have made Augmented Reality mainstream, we’ve seen what Realestate.com.au are doing – take my word for it – this is going to be huge.

Until then, get your Fox Vision on – download “Fox Vision” from Google Play or App Store from 5pm Wednesday. (Can take some hours to reach all the App Store servers, be patient)