When you’re up against Apple and Samsung there’s a pretty strong need to create a point of difference in the mobile market – something more than just mega pixels and design.  Motorola have certainly done that with the all-new Moto Z with Moto Mods.

The Moto Z is striking in its design.  Razor thin are words used by Motorola and perhaps for good reason – bring back the memories of the popular Razor flip phone that served the company so well many years back.

At just 5.2mm thin for the most part (not including the camera “bump”) it is very nice to hold. The design also makes it quite light (136 grams) yet there is one thing missing – the headphone jack.  No fanfare or headlines here.

With a Quad HD AMOLED screen, you won’t be disappointed by the look of the phone, while the processing power too is likely to fall behind some others in “benchmark testing” but for the average user you won’t notice a thing – I’ve been using it for days and all the apps I use regularly across my phones were as good as any other. 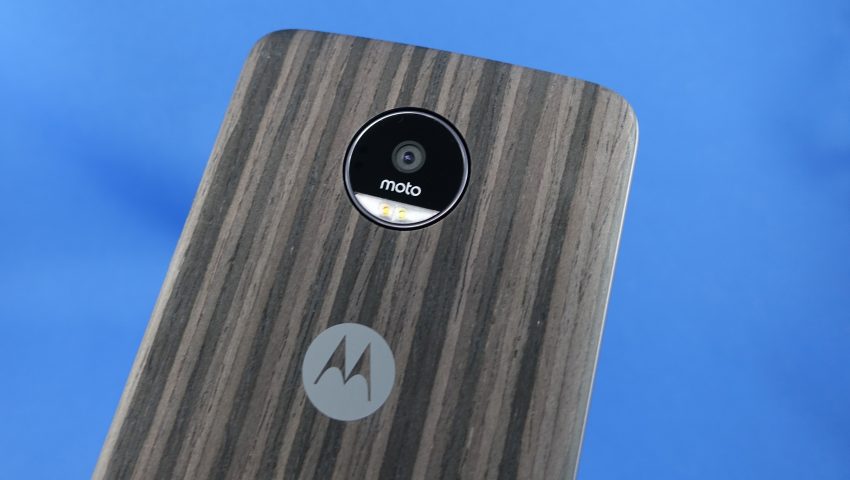 Motorola have priced this at a premium ($999), with a Moto Z Play version available at $699 with slightly lower res screen but similar other specs without the ultra thin profile.

The hope seems to be with the Moto Mods, accessories that not only enhance but transform the Moto Z. 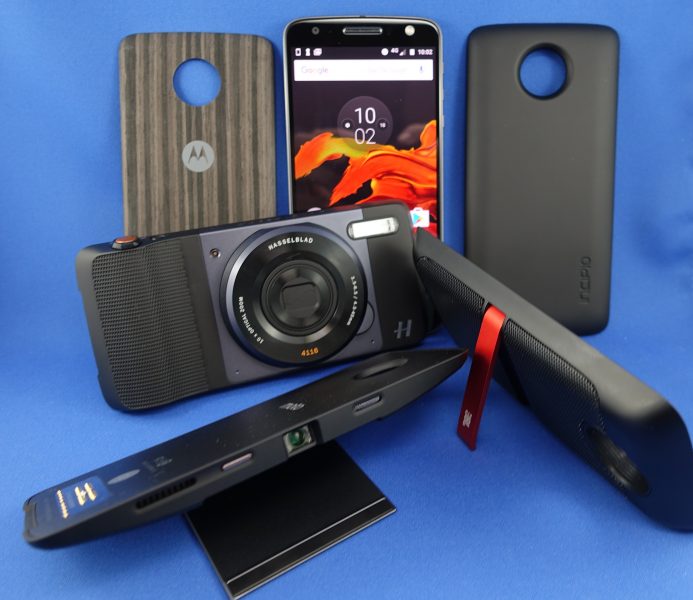 While a back cover is available in the box, that’s just vanity – just for looks.  You can get them in a series of leather, fabric or Oak finishes. 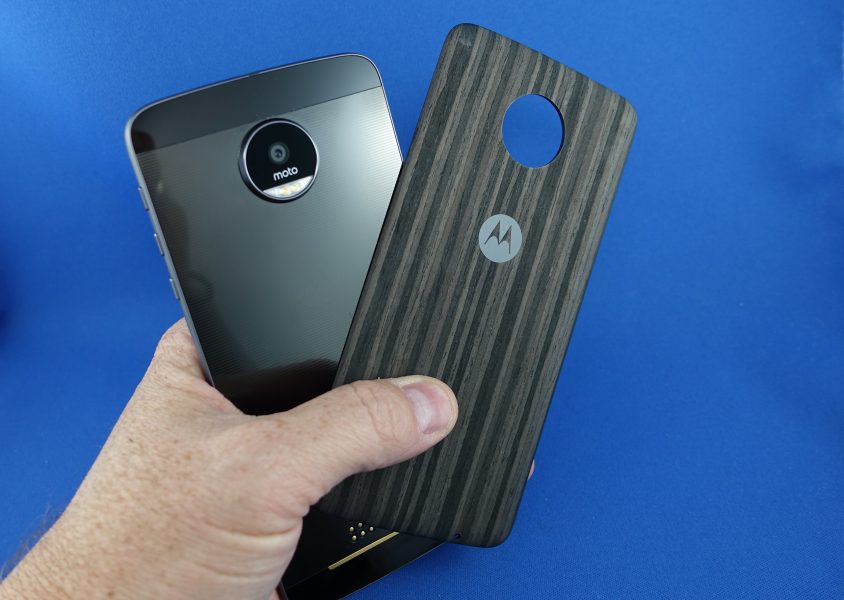 What you really want it to take it to the next level.  For extra battery power, you can get Incipio “offGRID” power packs, which clip on require no additional connection and will charge up your device. 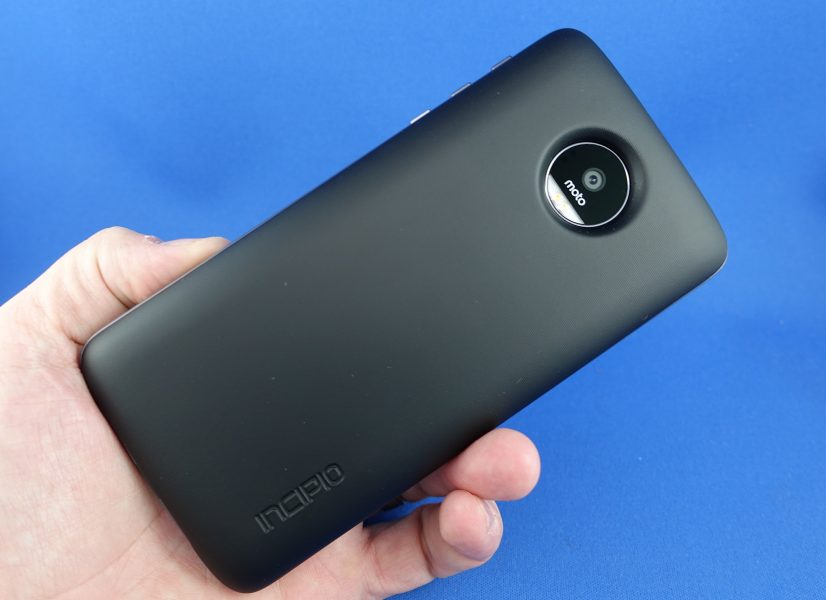 For sound, there is a JBL SoundBoost speaker, which again just snaps on.  The sound quality to me sounded like that of a sub $100 bluetooth speaker, however there is no pairing required here at all – and the speaker has a kick stand so you can use it for watching movies or TV shows on the phone.  Plus, if you’re busy on the job, you can use it as a speakerphone also. 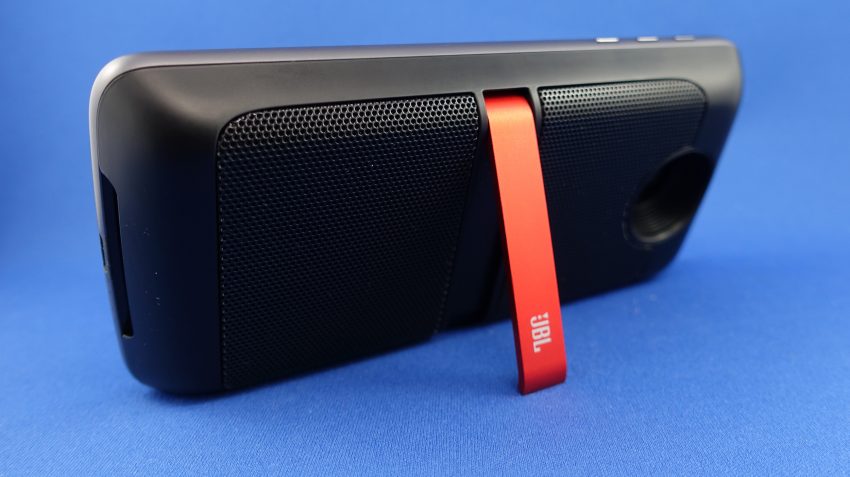 The Instashare Projector snaps on, and at $429 offers you a simple projection solution.  Great for watching content while you’re away or using for quick presentations at work. 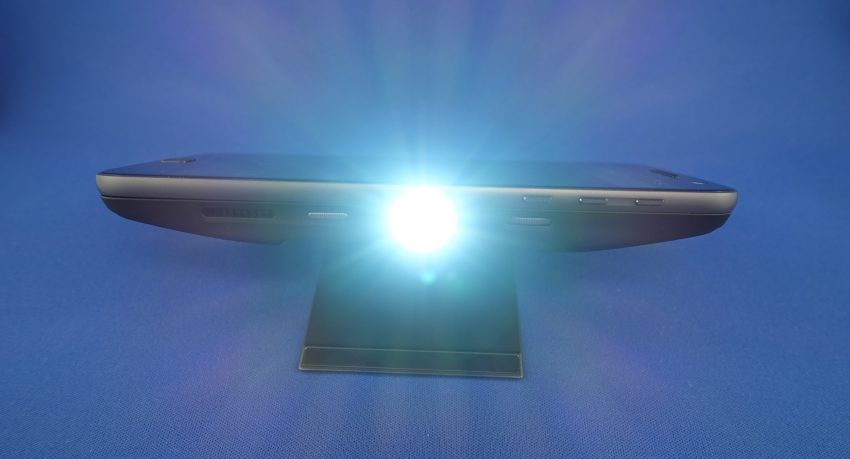 Sadly the screen isn’t that bright, so you would need a very dark room and white wall to get the most from it.  Focus is available on a simple dial on the Mod. 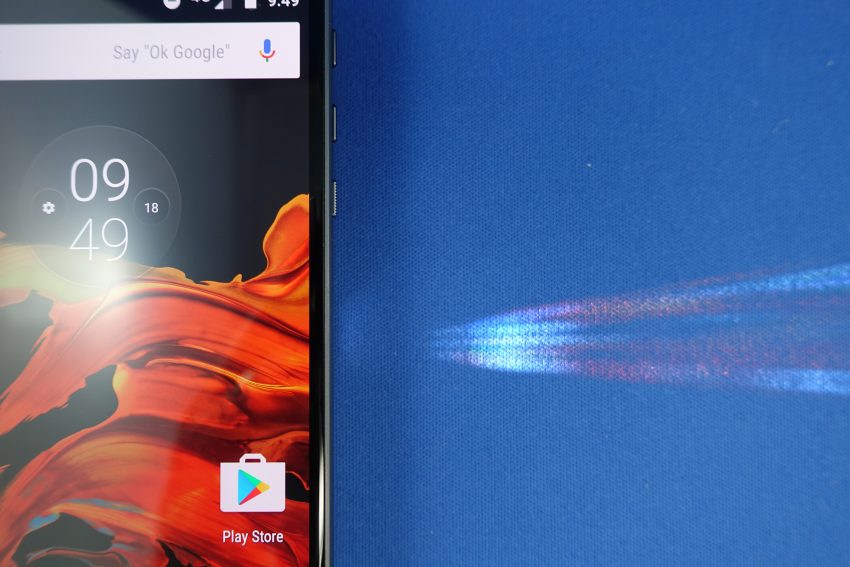 Finally, the most interesting Mod of all.  The Hasselblad “True Zoom” camera.  This guy looks the part – really looks like a camera.  Reminds me of Samsung’s attempt at the point and shoot smartphone hybrid camera. 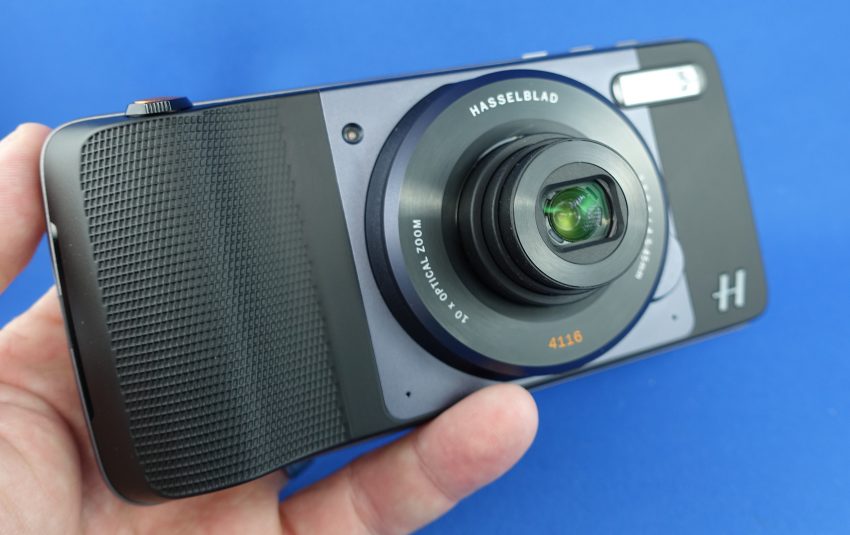 You get a proper optical Zoom but don’t need it on all the time – just snap it on at photo time, keep it in the bag otherwise.

The Zoom is stunning. 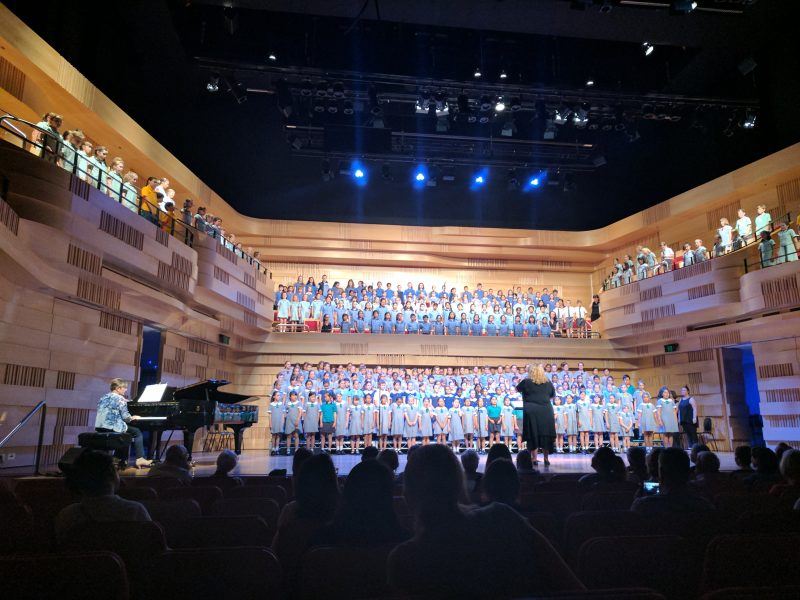 And the same phone with digital (pinch to zoom) full zoom. 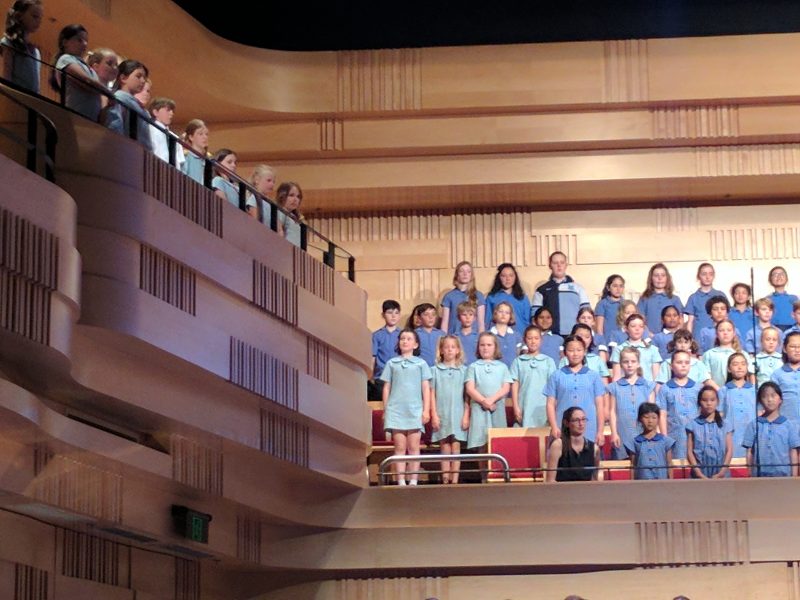 Now look at the Hasselblad 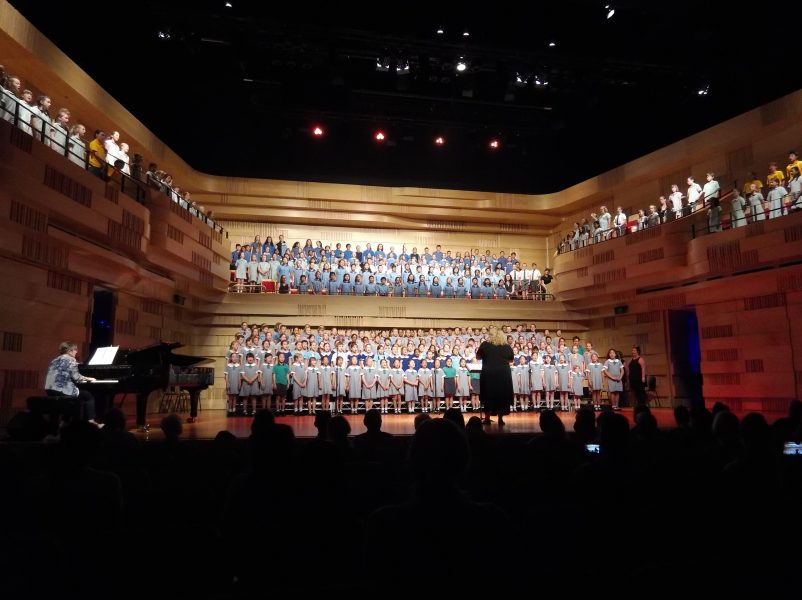 And how it does a 10x optical zoom. 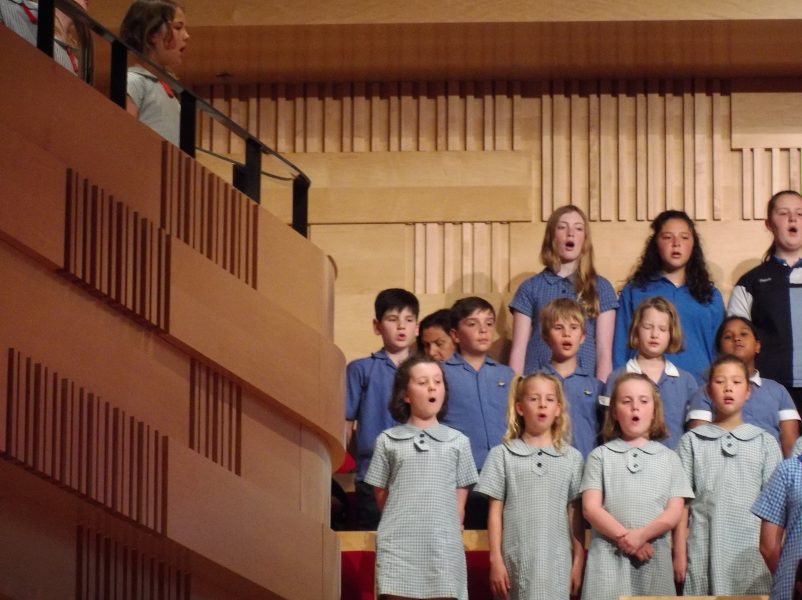 It’s impressive, without question. However.  It’s Hasselblad by name, not by lens.  Plus, it’s a bit clumsy to carry around if you don’t have a bag with you (blokes).

There were times when it was buggy, and needed to be detached and reattached.  And the zoom is not smooth or steady so can’t be used while recording video.

For some reason there is a lag on-screen when you move around, most noticable when you’re zoomed in – and the focus is anything but fast.  Frankly, a bit disappointing.  Also, memo to Motorola, a good camera needs a tripod mount point.  That would be great here.

Overall, this is a cracker phone, so thin and light – but it’s priced too high to compete with the big guys.  At $799 this is a winner – sadly, it’s $999.  The Mods are a great start, but they all need a bit of work to refine them, and that’s going to be an issue if people don’t embrace it from day 1. 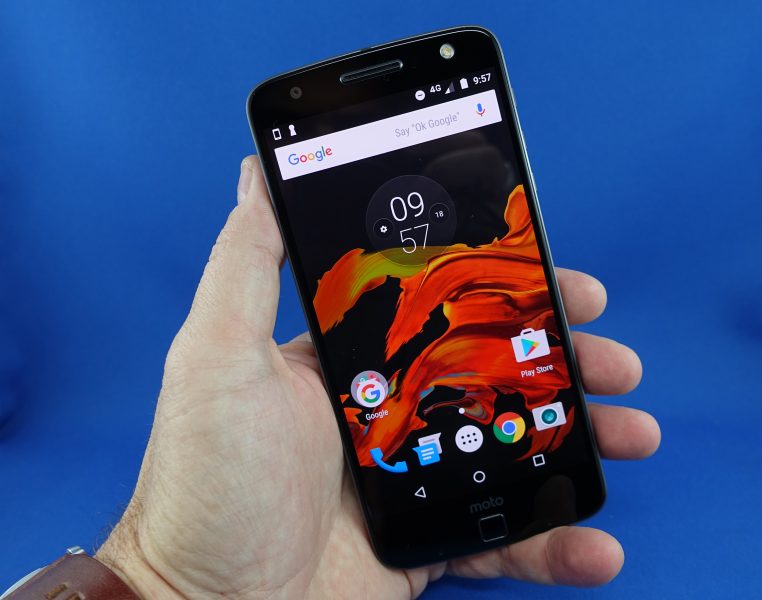 Time will tell – but I think Motorola have some great medium priced smartphones in Australia and those are likely to continue to perform better than the Z.

Without the mods, it’s a 4 or 4.5 star phone.  Sadly, the price and mod quality probably drop it back a touch.

[schema type=”review” rev_name=”Moto Z with Moto Mods” rev_body=”Great phone, thin, light, powerful. But the mods are a touch strange, despite being very tempting. Price is a touch too high for my liking” author=”Trevor Long” pubdate=”2016-10-18″ user_review=”4″ min_review=”0″ max_review=”5″ ]